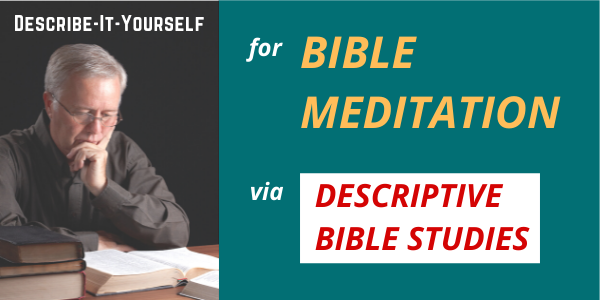 DESCRIPTIVE BIBLE STUDIES
The missing ingredient in much otherwise-good study, teaching, and preaching today is meditation. If much time is spent studying the meaning of words or reading commentaries, there may be little time left to think deeply and broadly about the passage and / or the people in it. Of course, simply being busy with various matters in daily life leads to the same neglect.
The descriptive Bible study method is our attempt to revive the art of biblical meditation in a systematic way rather than a mystical one. It is not just the amount of time that is spent thinking about a Bible passage or biblical character that is important. The quality of the time spent is also very important. So a systematic method is needed.
Our method is to scroll through a list of descriptive terms and prases, each of which prompts a question about the passage, person, or subject being described. You will be using a systematic, thought-provoking tool, and asking yourself many more questions about the subject at hand than you would do without such a tool.

SAMPLE STUDY: How would you describe Psalm 51?
‍First, begin a list of descriptive terms and phrases on your own before using the Describe-It-Yourself list to add to it. Do this by completing this simple sentence, Psalm 51 is... Remembering to avoid long sentences, you might write short notes saying that it is: "a prayer," "by David," "about sin," "sad," "about the past," "about the future," etc.

Second when you run out of ideas, open the DIY master list and start asking yourself if the various terms or phrases on page after page are appropriate or not. With practice, you will be able to go through the pages on the list faster and faster. Page 60 is shown below. What phrases or terms on this page would you select? 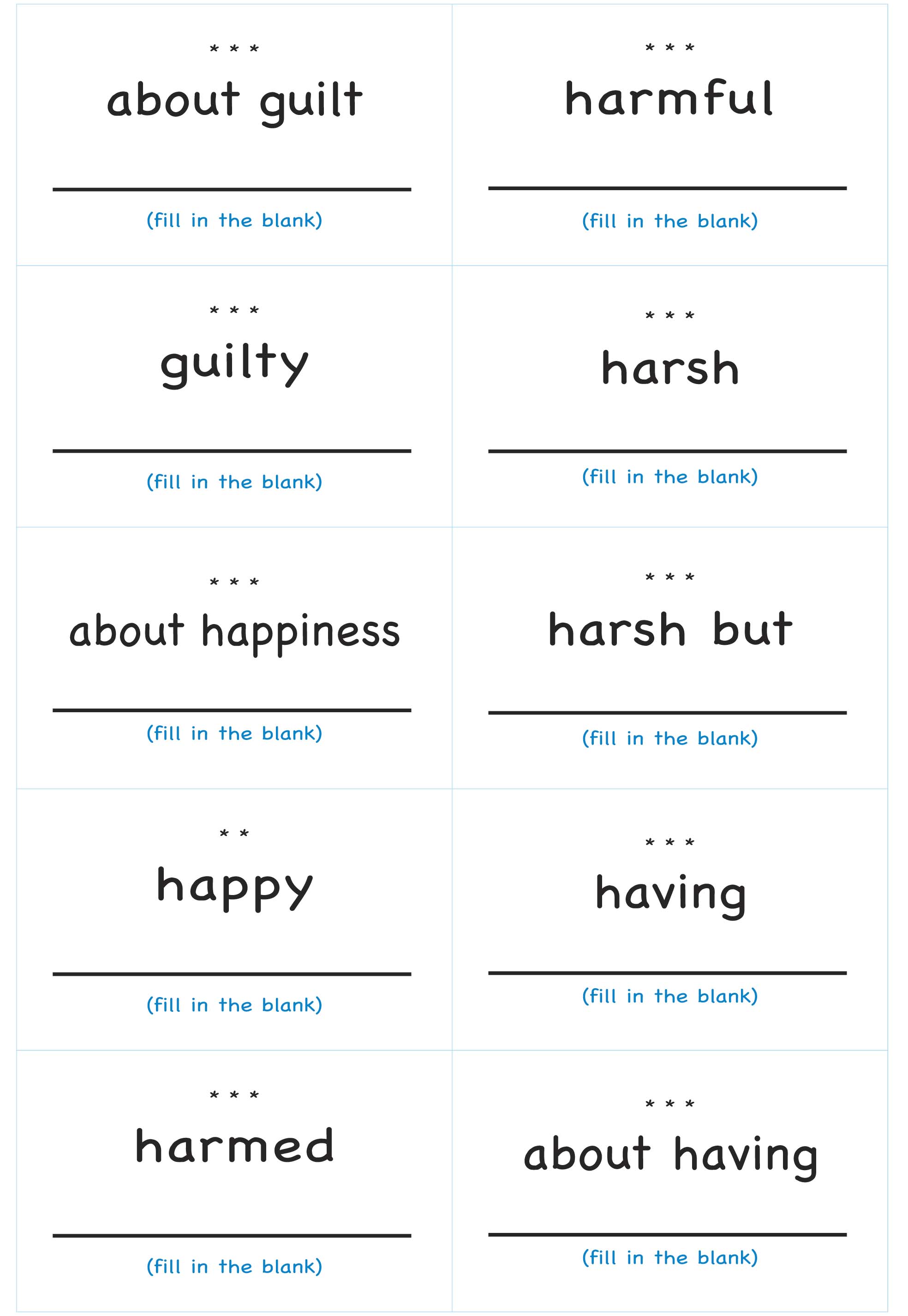 Psalm 51 is obviously about guilt. So you will want to use that phrase, but how would you fill in the blank line that comes with it. Various additional words would fit well. For instance, you might wish to say that Psalm 51 is about guilt and forgiveness. Alternatively you might say that Psalm 51 is about guilt and overcoming it.
In addition, you may wish to add to the about having phrase and say that Psalm 51 is about having a clean heart. You could also correctly say that the Psalm is about happiness through foregiveness.
Even various list times that you may not select will still be good to think about. For instance, would you say that Psalm 51 is harsh? Probably not, but it is good to note that David was not soft on sin or on himself either. The Psalm is specific about David's sin (51:14).
You should be able to go through the entire master list of about 1,800 terms and phrases in about an hour, once you get accustomed to using it. In the process, you will have thought your way through the Psalm many times over.

At the end, the final step is toselect what you believe are the most important descriptive phrases and make personal applications based on such.

STUDIES THAT USE THIS APPROACH
Much of the material on this website makes use of the descriptive method. The fourteen sets of studies shown below do so to greater or lesser degrees. Some of the descriptive studies come with blank lines to be filled in, while others have refilled blank lines that are to be judges as correct, incorrect, or partly correct. 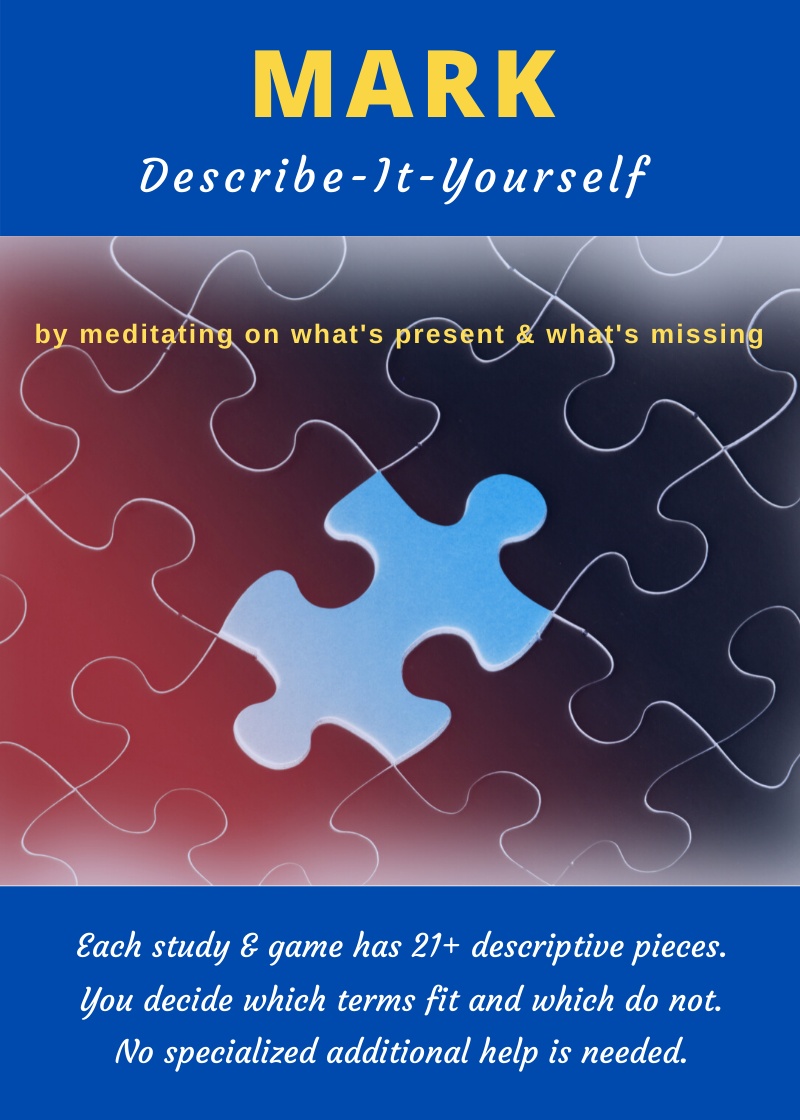 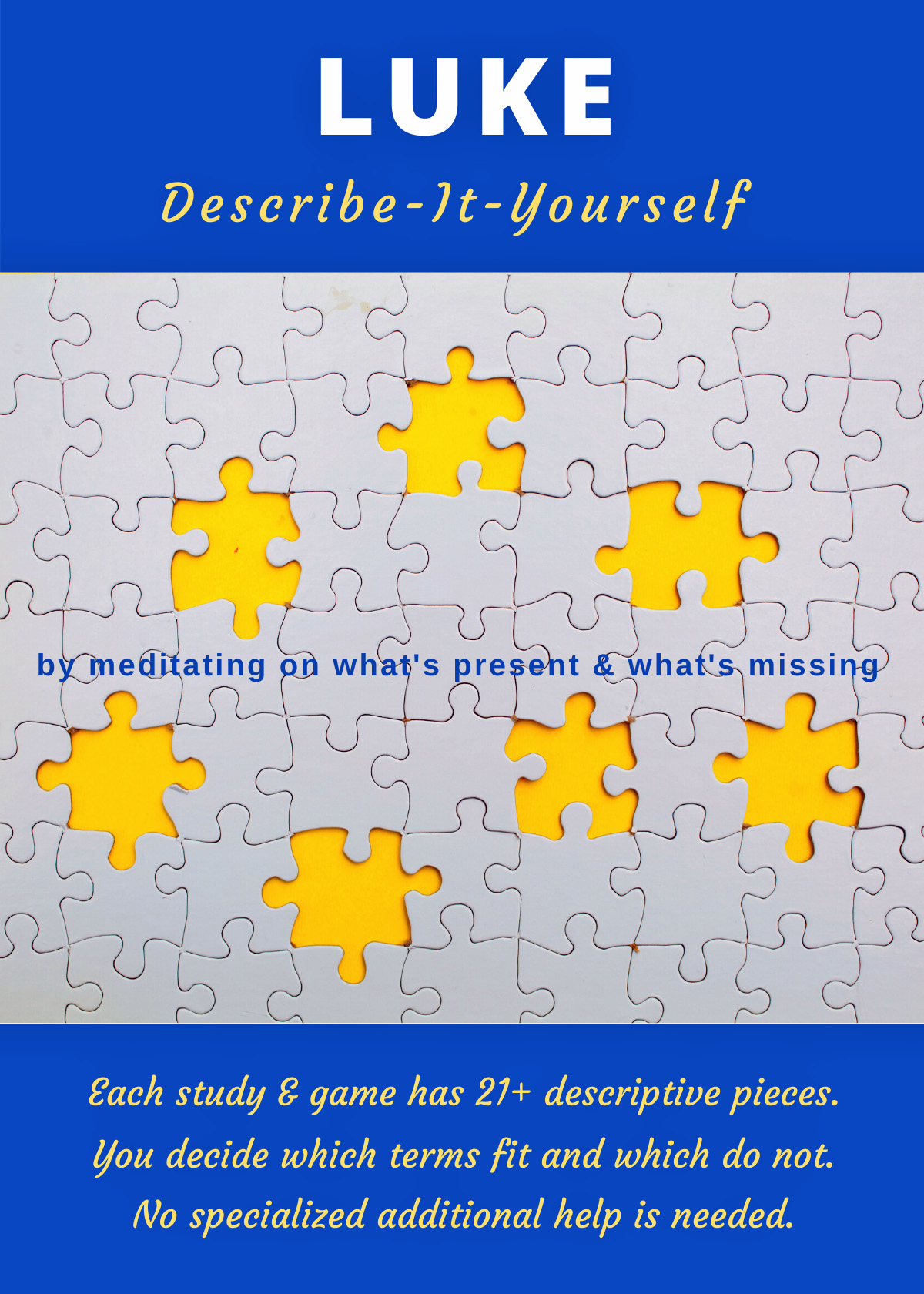 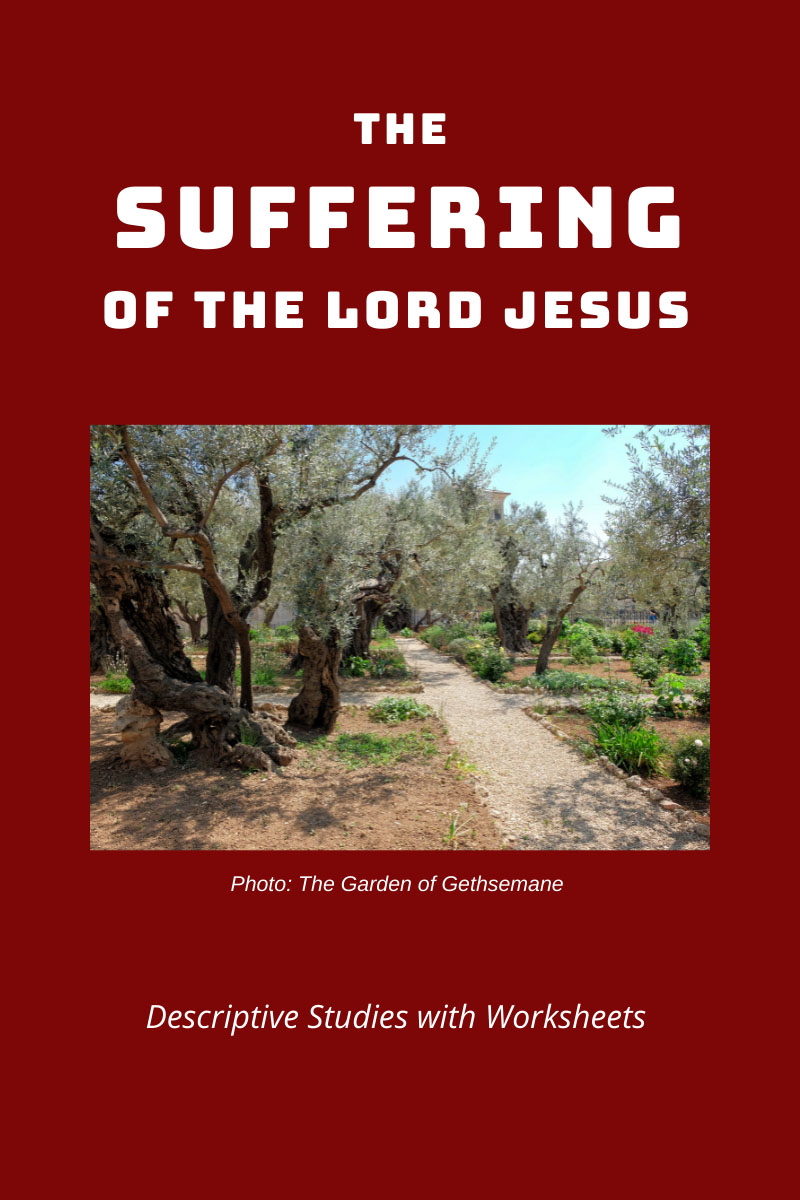 THE SUFFERING
of the Lord Jesus

Unlike most of the studies in Mark and Luke the worksheets in this set have blank lines which need to be filled in. So it would be good to look through the Mark or Luke material first in order to better understand the method. 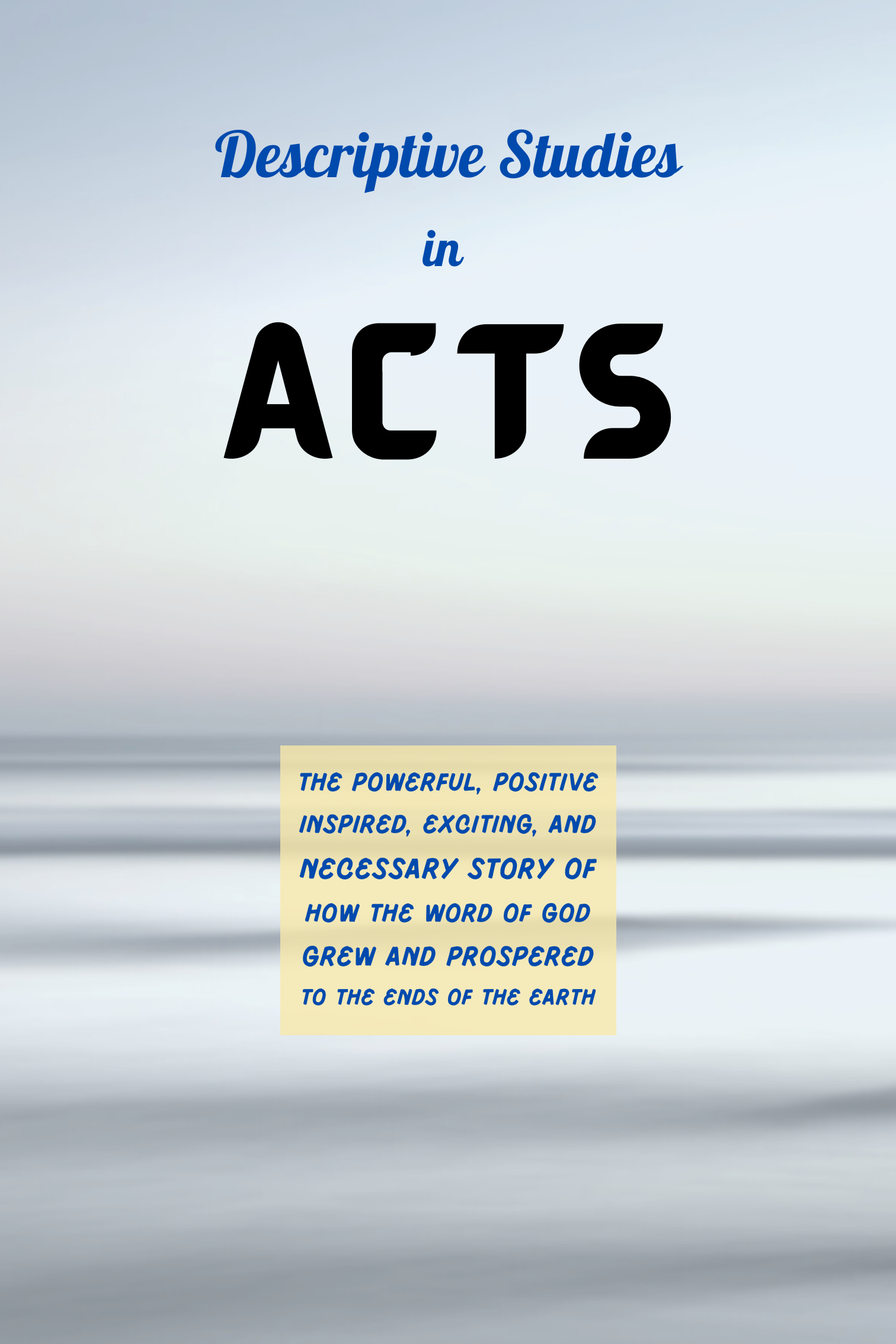 In several of the many studies in this set, lesser-known characters are the focus, but in most studies key events, messages, or ministries are tstudied and the descriptive method is used. 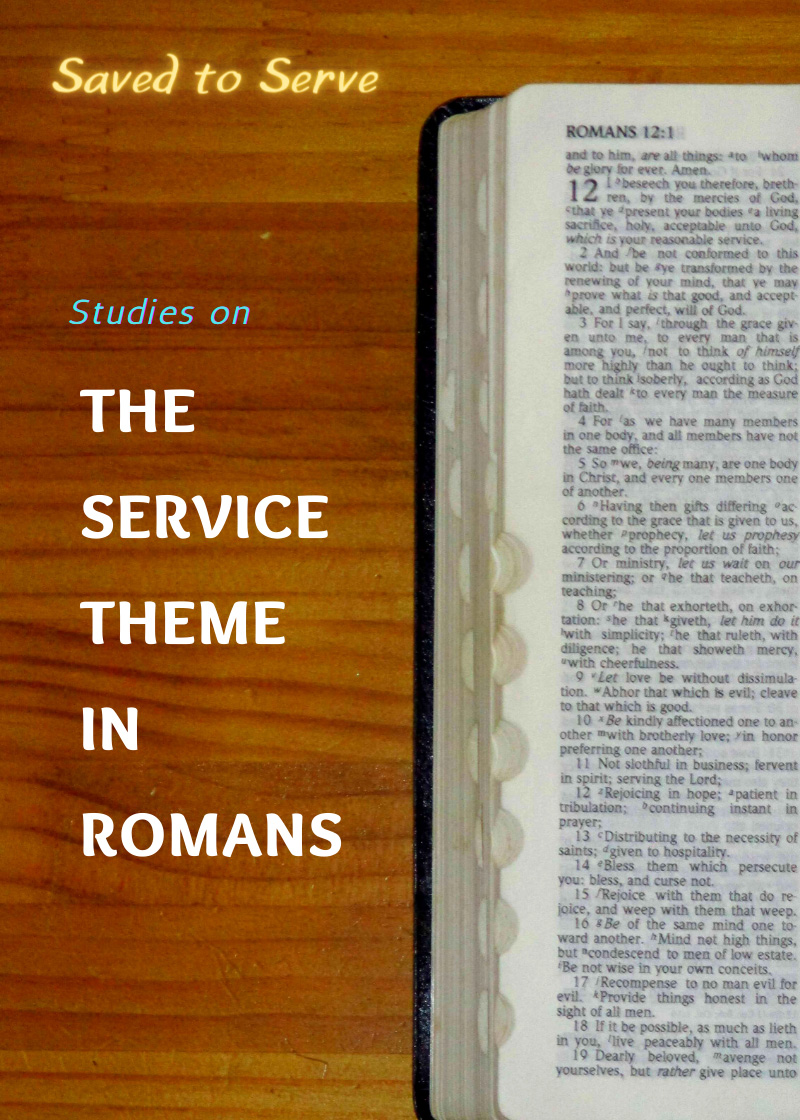 What is the purpose of Romans? It is not just about salvation. The goal is for us to serve God. So chapter 12 must be taken every bit as seriously as chapter eight. The same is true of chapter 16 in which many servants of the Lord are mentioned. We are saved to serve!
Most of the studies in this set are done with Describe-It-Yourself cards. 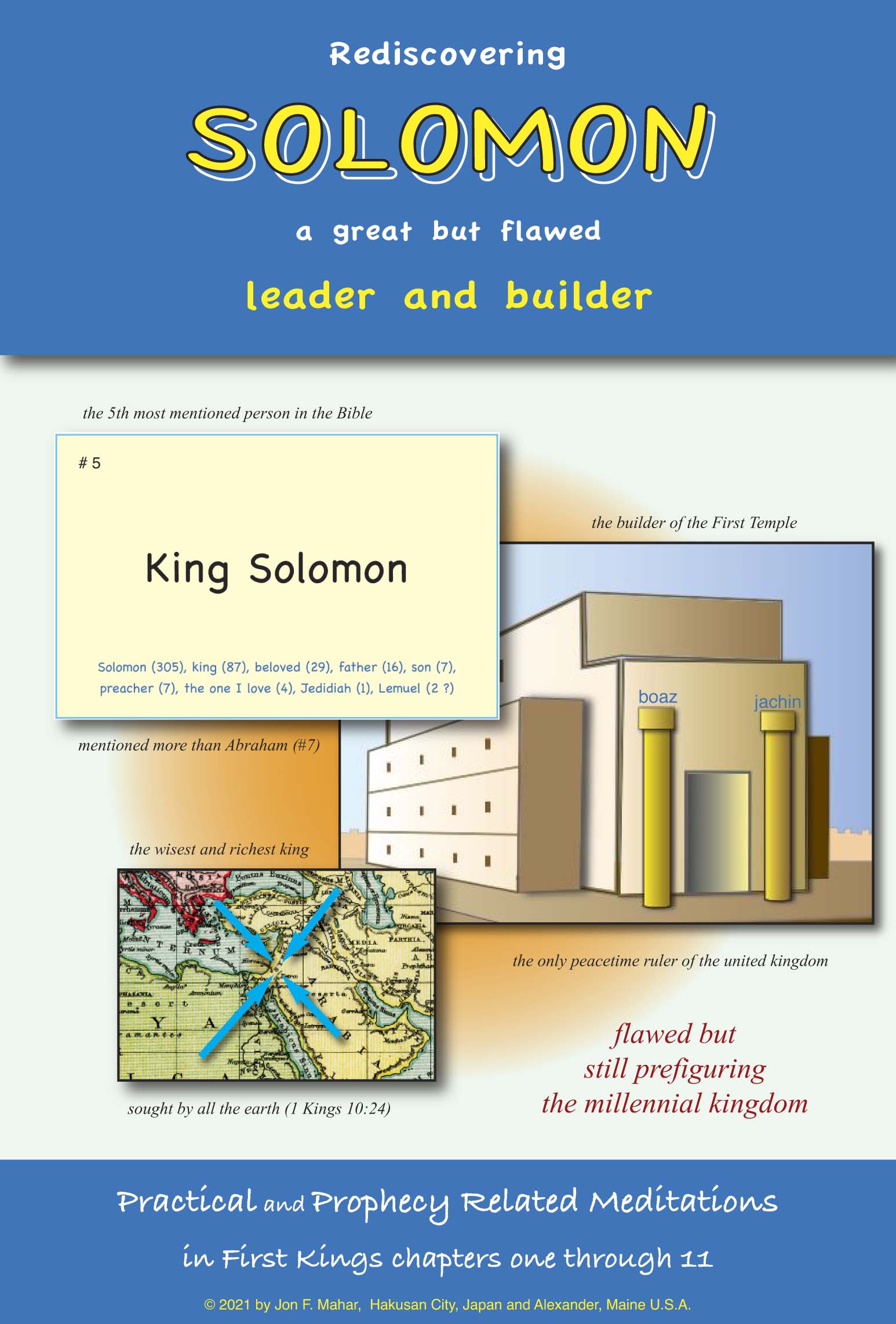 The third king of Israel is impressive in many ways but is rarely studied. This set of seven studies is practical and devotional. Yet it also develops key prophecy related points that are often missed.
Most of these studies make use of Describe-It-Yourself terms and the Wheel of Discovery tool. 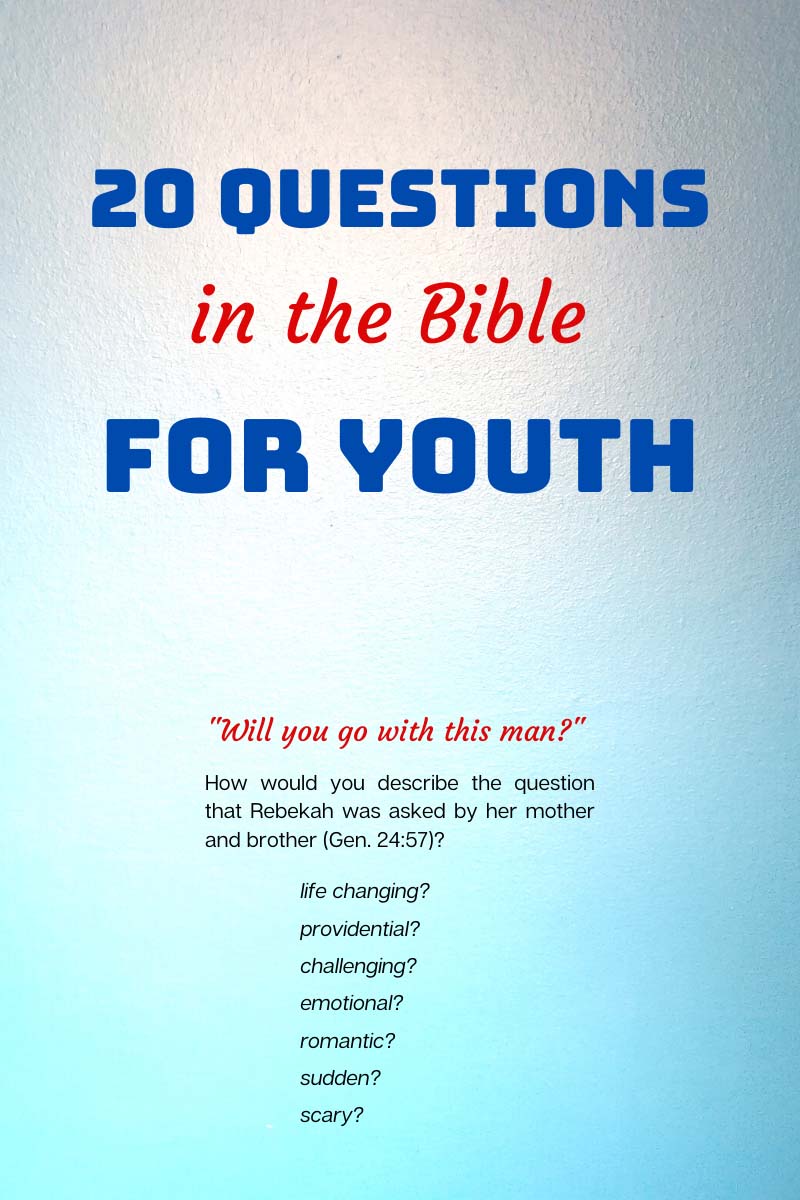 The twenty questions in this set -- which youth in the Bible were asked -- can be used in a variety of ways in youth groups, home school settings, or Christian schools.
Most of these studies make use of Describe-It-Yourself terms and the Wheel of Discovery tool. 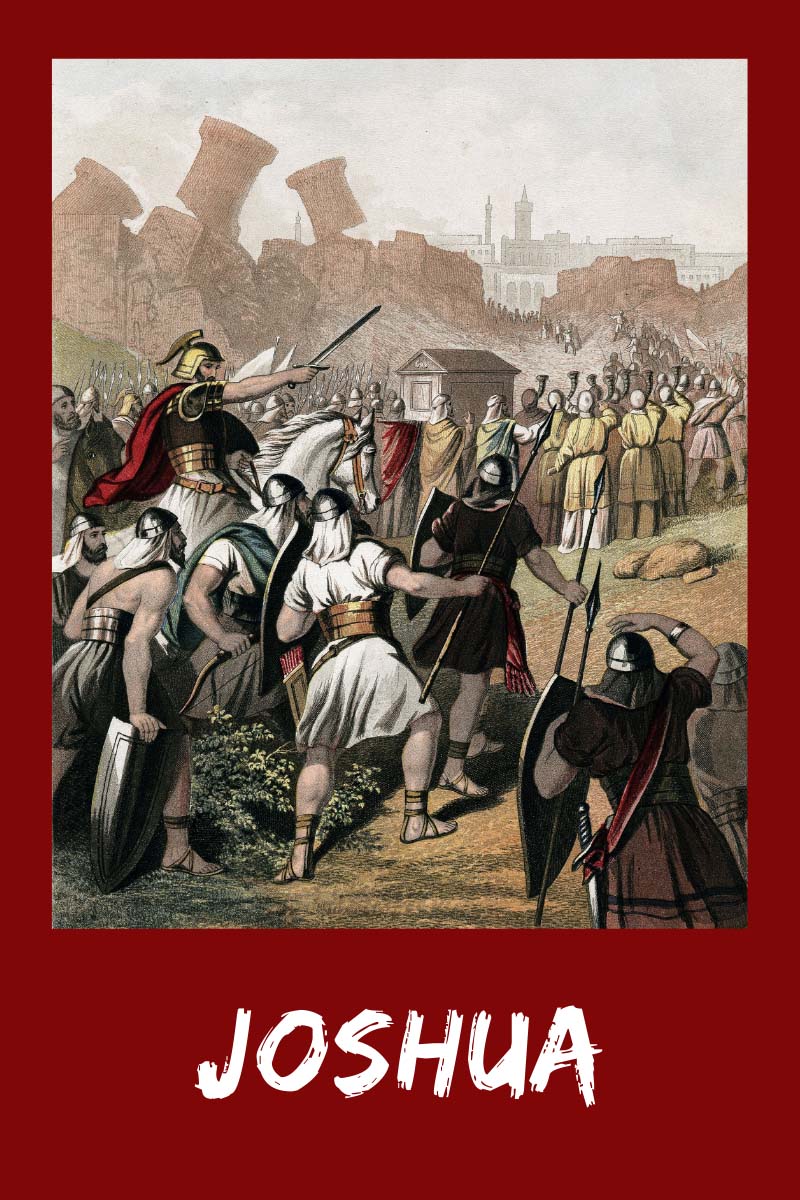 Five of the seven studies in this set are descriptive, making use of Describe-It-Yourself Cards. The first of these is on the crossing of Jordan. The second such is on the Commander of the Lord's army in chapter five. 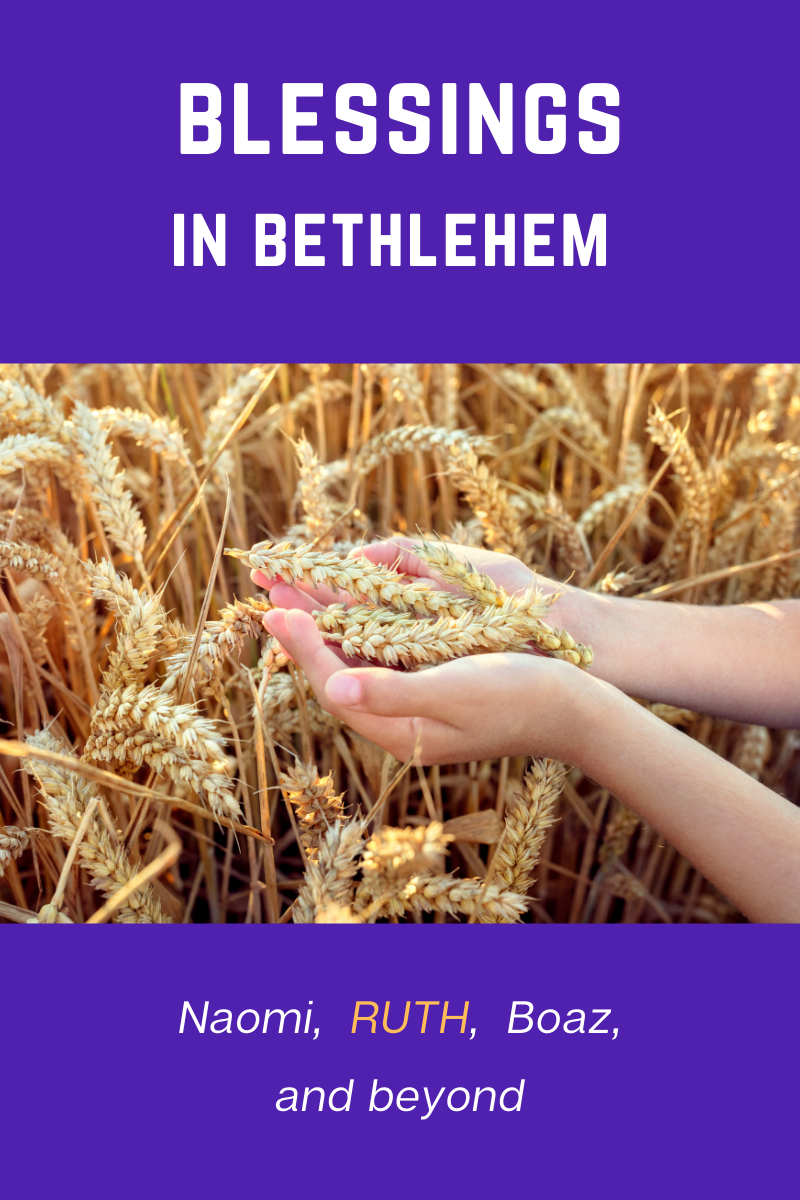 Five of the eight studies in this set are descriptive, making use of Describe-It-Yourself Cards. These studies well illustrate how the descriptive method works. 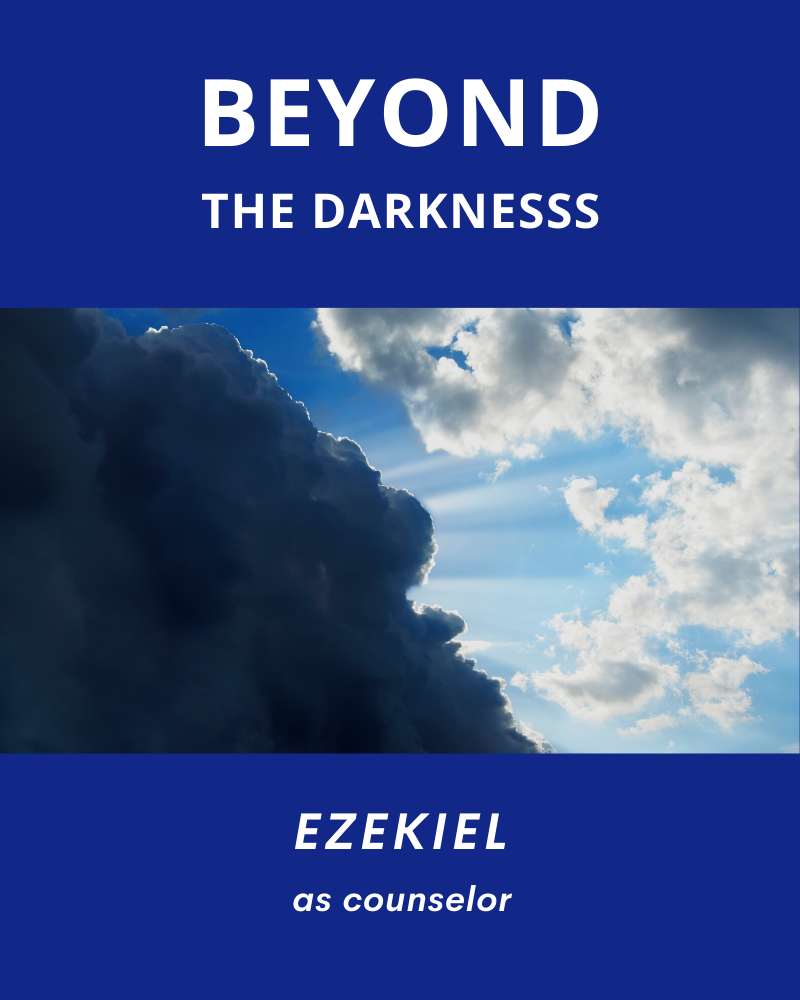 Ezekiel's ministry to the captives in Babylon was, of course, prophetic, but it was also counseling. The people needed to understand and look beyond their sad present reality to see the future glory of the Lord. We do as well.
Three of the six studies in this set use the Descriptive Method. 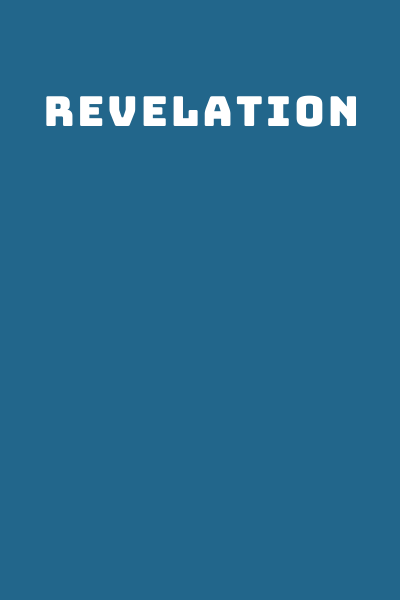 Three of the four studies in Revelation make use of the set of Describe-It-Yourself cards. in the final study, in chapter 21, the New Jerusalem is described. 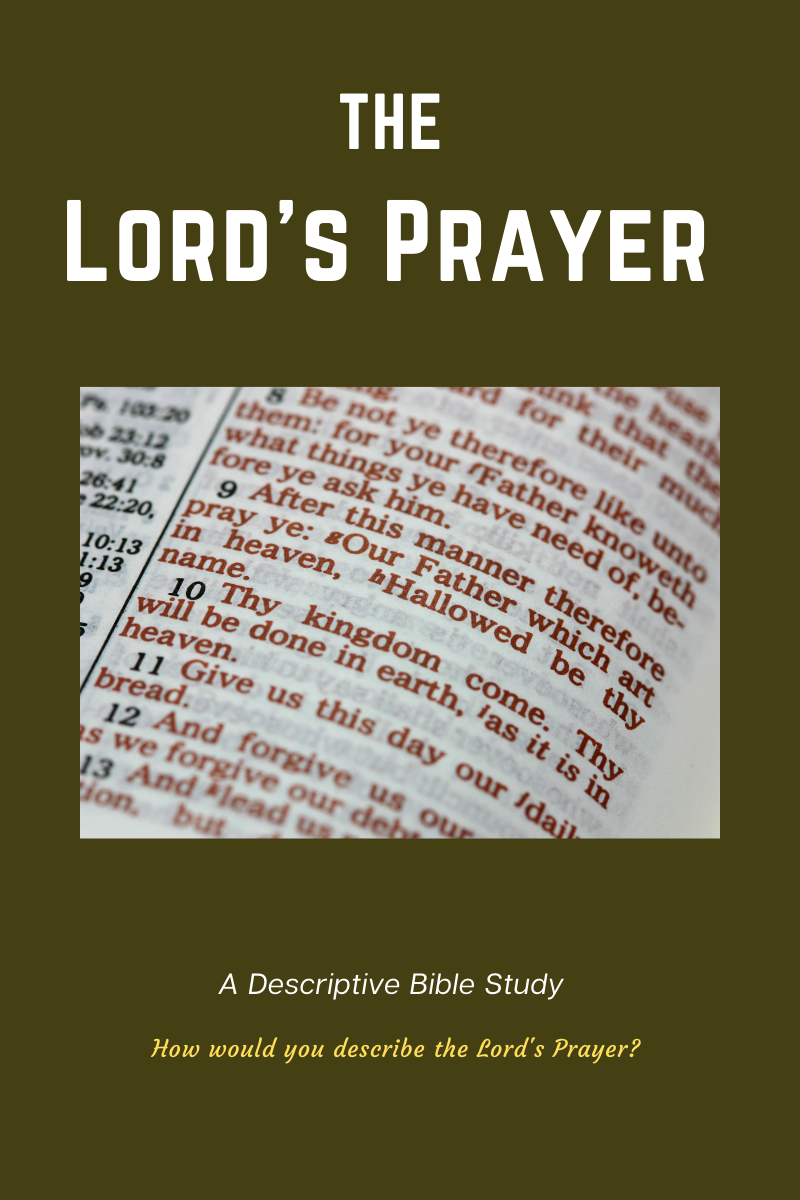 How would you describe the Lord's Prayer? The Describe-It-Yourself cards and terms can be used to do so. There is a summary chart and an optional game. One of the key points in this set is the Lord's Prayer is 3D. 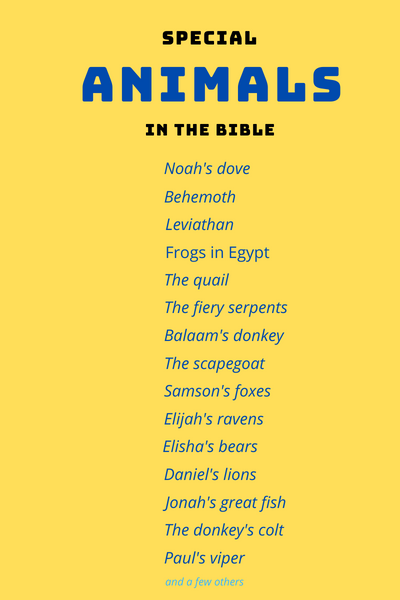 All 22 studies in this set use the Descriptive Meditation method with descriptive phrases or terms and blank lines for additional comments. How would describe the ravens that fed Elijah or the donkey colt that the Lord rode when he entered Jerusalem?