The worksheets in this set of studies all focus on the suffering of Christ as seen in particular passages, mostly in the Gospels. Although there are, of course, many similarities, each passage has its own focus and emphasis, and no one passage covers everything.

The blank lines on the worksheets are to be filled in using suggested terms and phrases listed at the bottom of the page. The descriptive cards on each worksheet are from the Describe-It-Yourself lists. The goal of each study and each card is to think deeply about the Lord's suffering rather than simply filling in the blank as quickly as possible.

It is best to try to fill in the blank lines before looking at the suggestions at the bottom. This will be much more thought provoking and may even lead to better answers than those suggested. 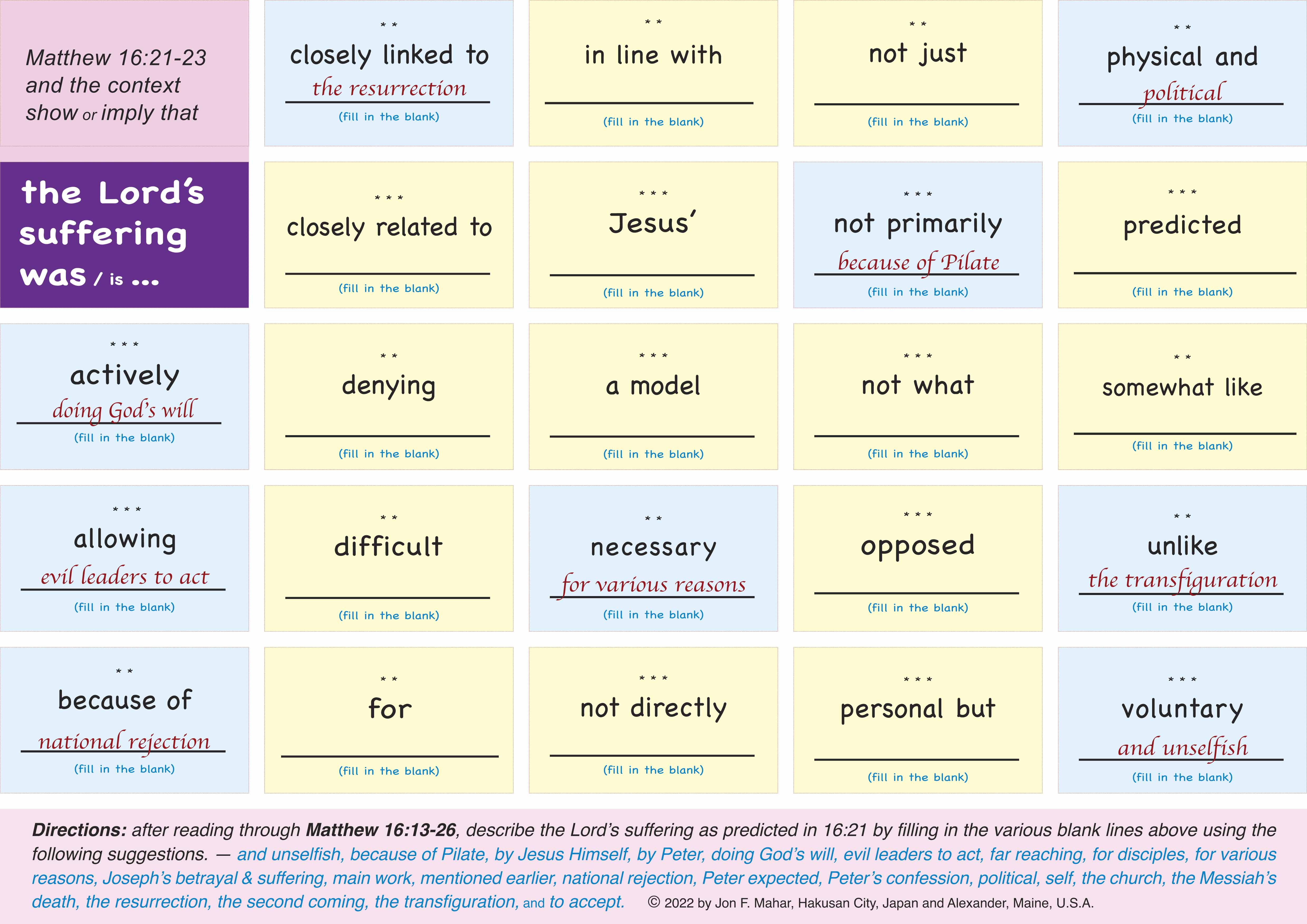 This passage contains the first direct mention of the Lord's suffering. Some basic points are shown as givens on the worksheet. For instance, there is a special emphasis on national rejection in Matthew 16:21 since Jewish leaders are mentioned but Pilate is not. This rejection is associated in the context with the beginning of the church (16:18), God's called-out assembly.
The substitutionary aspect of the Lord's death, for our sins, is not emphasized here, but Ephesians 5:25-27 shows that his suffering for the church involved love and had sanctification from sin as its goal.
Also, although the Lord's suffering was not what Peter expected (16:22-23), it was to serve as a model of unselfish living and dying for the disciples (16:24-26). 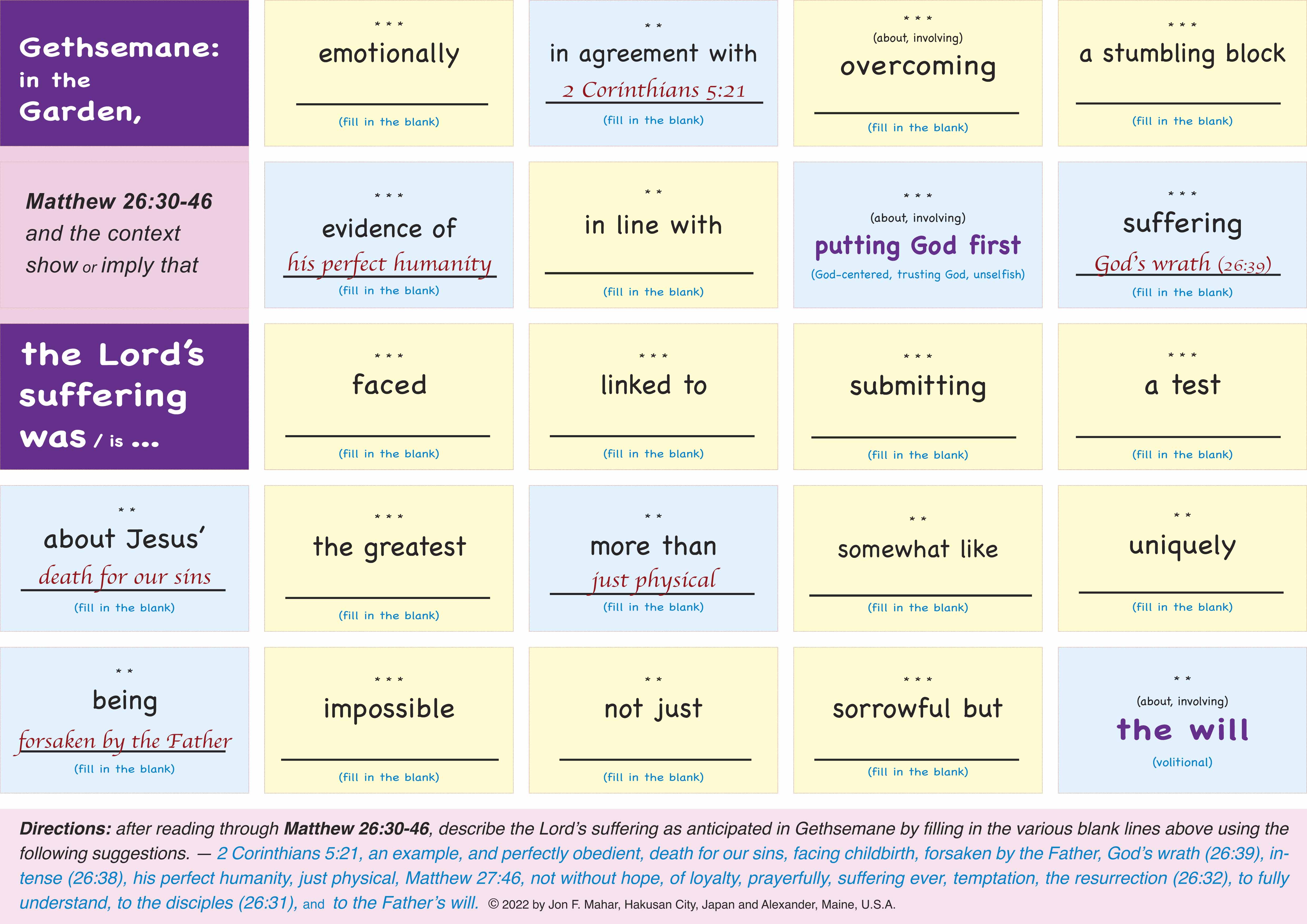 The Lord's prayerful struggle in the Garden of Gethsamane is the most emotionally intense manifestation of Jesus' passion. The only other text that is similar in this way is the "Why have you forsaken me?" cry from the cross (Matthew 27:46). Obviously the prayers in the Garden and this cry are closely related. They show that the Lord's suffering was not just physical and not just an example. His suffering for our sins was the greatest suffering of all time. 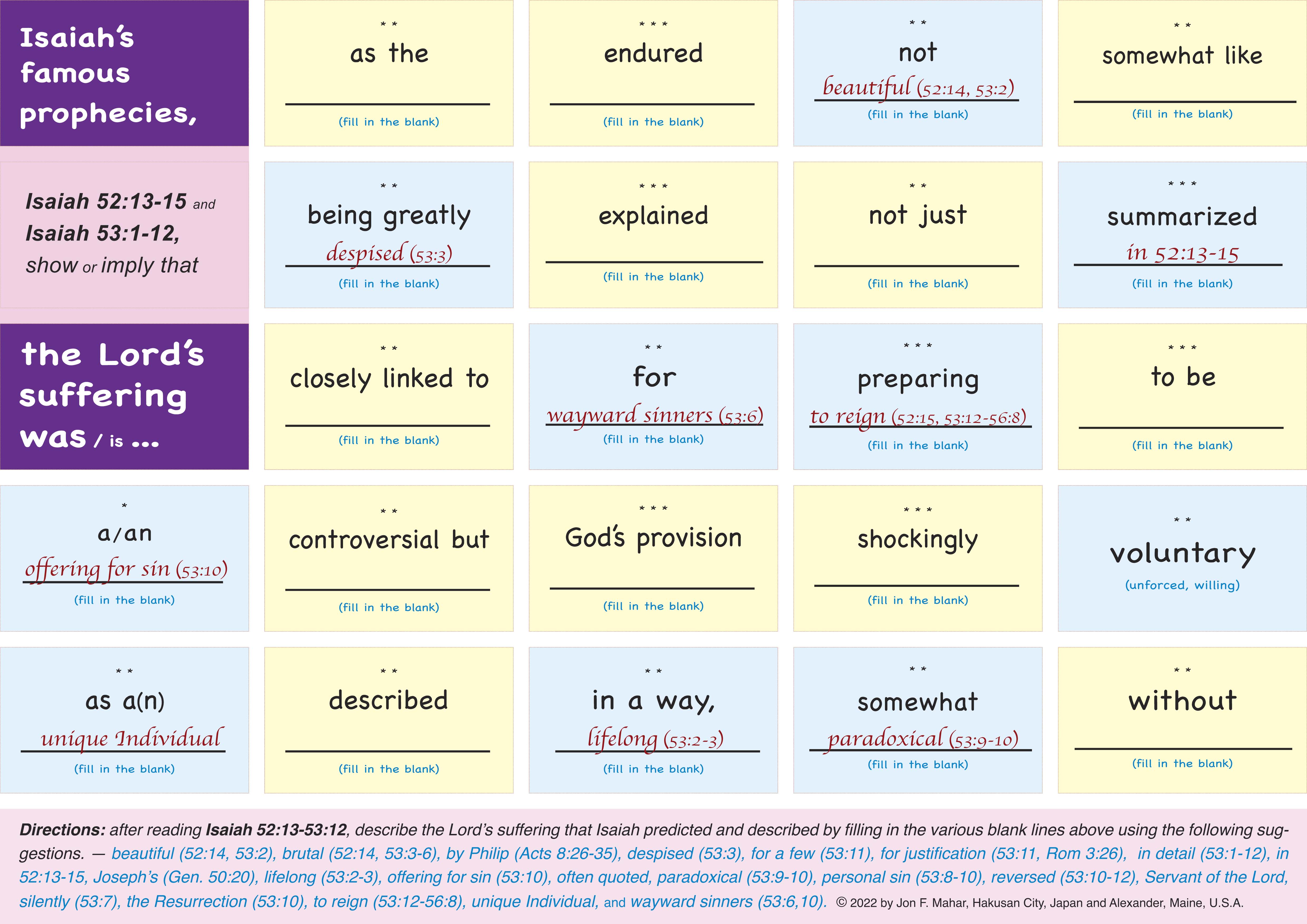 CONTROVERSIAL?
Isaiah's prophecies of the Suffering Servant are not, for the most part, controversial among Christians, but, of course, Jewish scholars argue that the Servant is the nation of Israel rather than an individual. The "we" and "us" references in chapter 53 seem to rule out their view. Moreover, the Ethiopian in Acts 8:26-39 shows that the most natural reading of the passage is to take the Servant as a unique Individual.

FOR WHOM?
Another theologically controversial aspect of the chapter is the meaning of "many" in 53:11. Does this mean that Christ only died for the elect rather than for everyone? The simplest explanation is that many in 53:11 and 52:15 contrasts with few rather than with all. The Lord was despised (53:3), but those who would be justified through his sacrifice were to be many rather than only a few.

LIFELONG SUFFERING?
The glory of the Lord Jesus was hidden from public view, including by the humble circumstances in which he was born and raised (53:1-2). In a way, this was lifelong suffering and is in line with Phil. 2:5-8. Of course, the suffering climax came with the cross, however.

PARADOXICAL?
That said, the following chapters in Isaiah and the final verse in chapter 53 show that reign of the Messiah over the nation of Israel and the world during the future kingdom are in view, and this will be a greater climax. So the Lord's suffering was in preparation for his reign, a key fact that many Christians fail to notice. The suffering is to be reversed or turned into glory and joy (Phil. 2:9-11). As Joseph was despised and rejected by his brothers but later reigned over them, so too the Lord Jesus shall reign over those who rejected him. This is probably the greatest paradox of all in the passage and context.

This is a new set of studies, but additional worksheets will be added in the future