Check out these great ways to study Joshua.

As Moses assistant and the main character in the book which bares his name, Joshua (#12) is one of only two people in the book who is ranked in the Top 55. Can anyone guess who is the other person is? Most people can not. The high priest, Eleazar, the son of Aaron is ranked #33. In fact, he is mentioned in Josh. 24:33, which is the last verse in the book. This shows that the priestly ministry was important as well as the military one.
‍
DISCUSSION IDEAS: 1.) Compare and contrast Joshua with Moses, Gideon, David, and Eleazar. 2.) Why wasn't Joshua given a military title (5:13-15). 3.) Why is Joshua's family hardly ever mentioned (24:15). Use the cards as you discuss the various people.

Why was crossing the Jordan necessary? Well, of course, it had to be crossed in order to get to the other side. This simple answer is worth one point. What other reasons were there? Well, the miraculous crossing helped establish Joshua as God's leader. Good, that's a second point. For each valid point made in one minute or less one point is earned. That is the essence of how this fun game or study is done using randomly selected cards, some of which are more challenging than others. Some cards are actually incorrect, but a point can be earned for each rebuttal point. 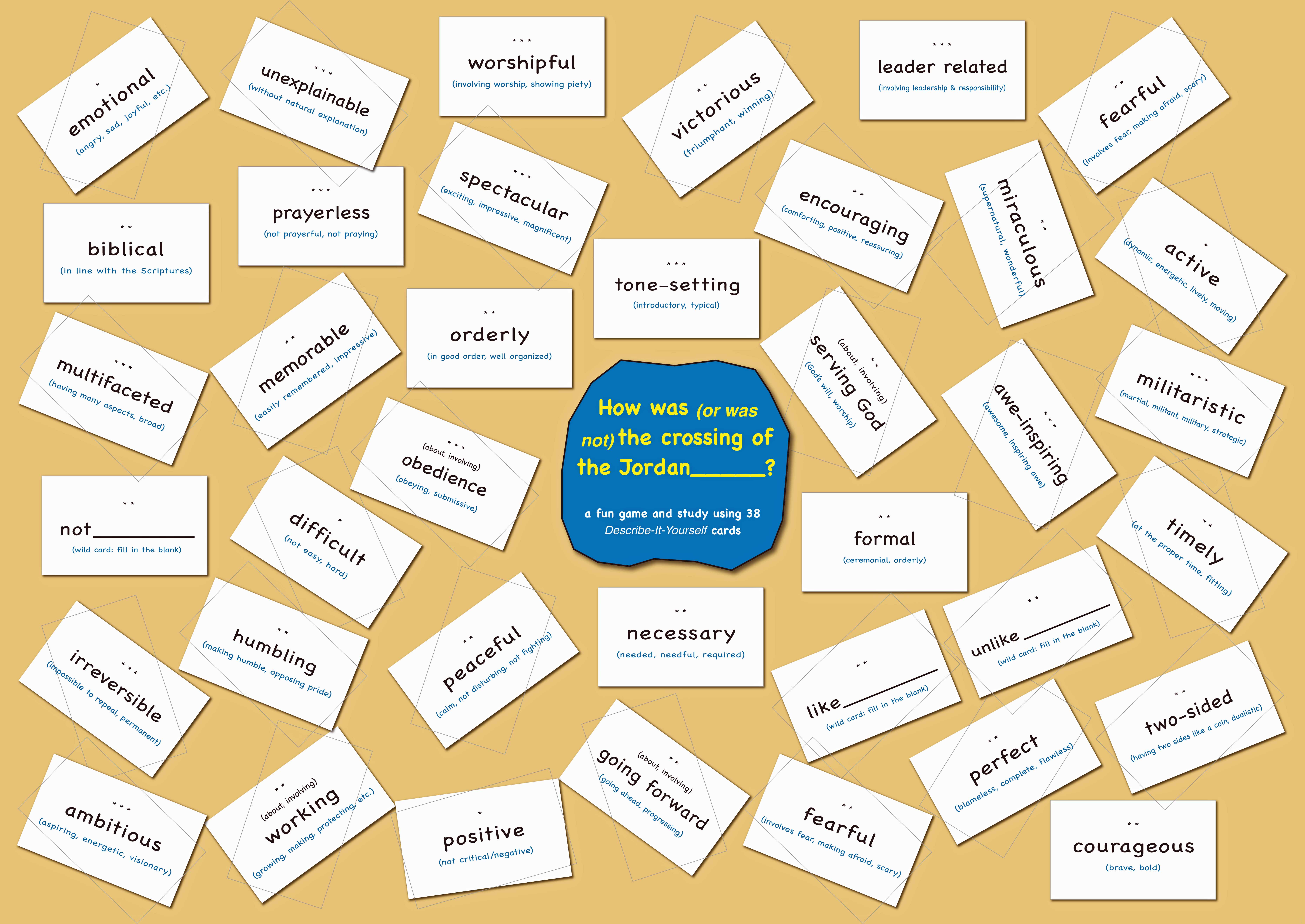 Be Flexible! If the group is mostly children or beginnings some of the more difficult cards can be removed and replaced by new simpler ones. Also it is often good to: 1.) form teams, 2.) allow thinking-time before answers are given, 3.) allow more than one minute for answers to be give, and  4.) allow the leader and others to provide helpful hints.

3. The Priests at the Jordan

The crossing of the Jordan in Joshua chapters three and four was as miraculous as the crossing of the Red Sea in Exodus chapter 14. Yet, the work of the priests who carried the ark and stood at the center of it all is usually overlooked. This is because the story was not really about them. It was about what God did. It was that which the people were to remember. Even so the priests who are never named served the Lord. They were Lesser-Known but Significant Servants, like many others in the Bible. What a example they are for us!

4. The Commander of the Army of the Lord - Describe-It-Yourself Study

How would you describe the Commander of the army of the Lord? He only appears briefly in three verses, in Josh. 5:13-15. Yet he DID several foundational things in these few verses. Therefore most of the descriptive terms and phrases in the summary diagram below are verbal rather than adjectival. The Commander came to take charge or to show that he, rather than Joshua, was in charge of the battle of Jericho and by implication of all the other struggles that followed. 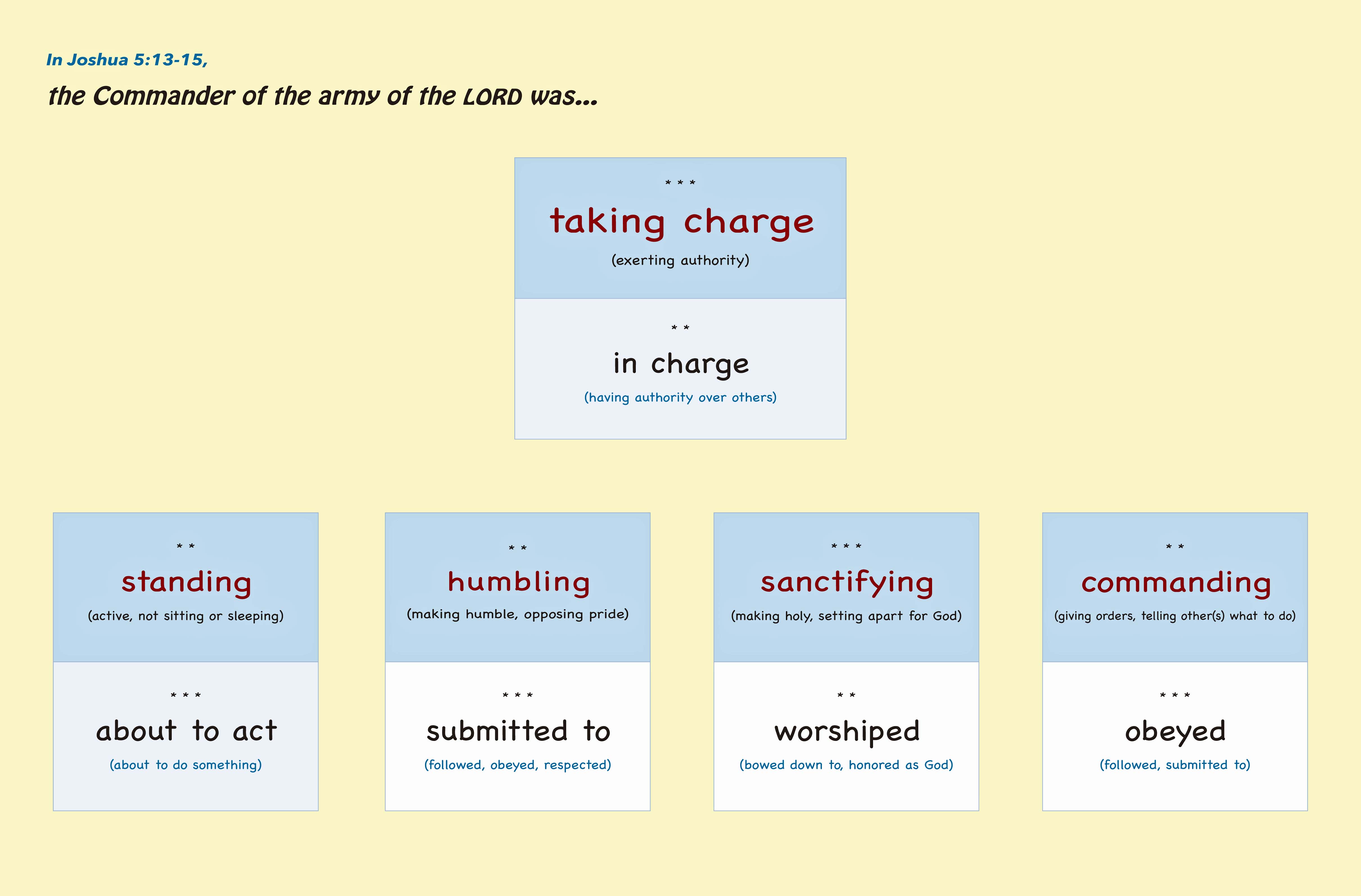 Since the Commander was worshiped by Joshua, he could not have been just an angel. So this was a pre-incarnate appearance of Jesus Christ, a Christophany. Joshua submitted to the Commander, worshiped him, and obeyed him. We must as well in order to prosper as God's servants (1:8).

God's presence and the sanctifying in 5:13-15 involved an indirect declaration that the judgment of the Canaanites and their removal from the land that was to begin soon after was a holy struggle in which God himself was taking the lead as the One with a drawn sword.

How would you describe Joshua in 5:13-15? Obviously, from the diagram above, he was submissive, worshipful, and obedient. In addition, it is important to note that Joshua was not as militaristic and ready to act as God was. He bowed his fact to the ground rather than remain standing, and his sword is not mentioned. Joshua was, of course, a godly man, as demonstrated by his worship. So, in a way, he did not need to be humbled. However, we all need to humbly acknowledge God's leadership. (Notice that Joshua is not called "commander.")

If you wish to describe Joshua more fully yourself, download the Describe-It-Yourself card file and make your own set of cards. It is more challenging to describe people and things in the Bible yourself, but it is always more edifying to do so. You can also use the D.I.Y. cards to lead group studies, many of them, not just this one.

CLICK HERE
for the printer-ready file of 800
DESCRIBE-IT-YOURSELF cards.

How would you describe the final day of the battle of Jericho? Click the button below to obtain the forty Describe-It-Yourself cards used in this study of Josh. 6:15-27. Think carefully, because some of the descriptive terms on these cards are incorrect and some others are only partly correct.

CLICK HERE
for the 40 printer-ready cards
for the JERICHO 7th day study.

This graphic is the answer sheet regarding these 40 descriptive terms. Those shown in pink do NOT describe the seventh day at Jericho correctly, and those with a yellow background are only partly correct. Pick a card and see if you agree with the answers shown.

Some terms like militaristic, successful, and suspenseful seem correct at first, but they are only partly so because they do not honor God adequately. The Israelites did not do most of the fighting; the Lord did. The victory was of God and military action is not stressed. Moreover, the fall of Jericho is presented as more a result of God's promise than as answered prayer. Since God fought for Israel, the chapter is indeed one-sided — but in a just way.

Unbelievers accuse the Israelites of genocide and excessive violence, but it was God more than men who acted in the chapter, and he was just and judicial when he did so, just like in the great flood. Yet, though the Jericho miracle was great, the chapter is not musical or joyful in tone. Nor is the chapter presented in a particularly glorious way, even though it is indeed awe-inspiring.

The judgment of the people of Jericho was much like that which will be carried out toward the entire world in Revelation. Since Christ will be the Judge during the tribulation period, the judgment in Joshua chapter six was Christ-like in that sense, even though it may not appear to be loving. However, Rahab and her house lived and their lives were changed for the better. In fact, Rahab is even in the messianic line (Mat. 1:5). So the chapter can be said to be about Jesus. (Cf. 5:13-15.)
‍
Sadly most of the world today ignores the historical accuracy of the Jericho events, regarding them as nonevents. Also sadly in the coming tribulation period, worldly people will think like Achan (7:1, 20-26) regarding God's fiery judgment upon fine Babylonian things as tragic and wasteful. (See Rev. 18:11-19.)

Finally, the seventh day at Jericho was climactic in the sense that it ended the seven days of marching around the city, but it also is introductory since it sets the tone for the various victories that follow in the rest of the book. All the victories were of God, though human obedience must never be depreciated. The Israelites were on the move!

How would you describe the Israelites' failure (and relationship) with the Gibeonites? Click the button below to obtain the forty-eight Describe-It-Yourself cards used in this study of Josh. 9:1-27.

This graphic is a worksheet with all 48 descriptive terms and phrases. Pick some terms and see if you agree with them. Some of the strong negatives ones are incorrect, because although the Israelites regretted making a covenant with the deceitful Gibeonites they remained faithful to the covenant because of the Lord. 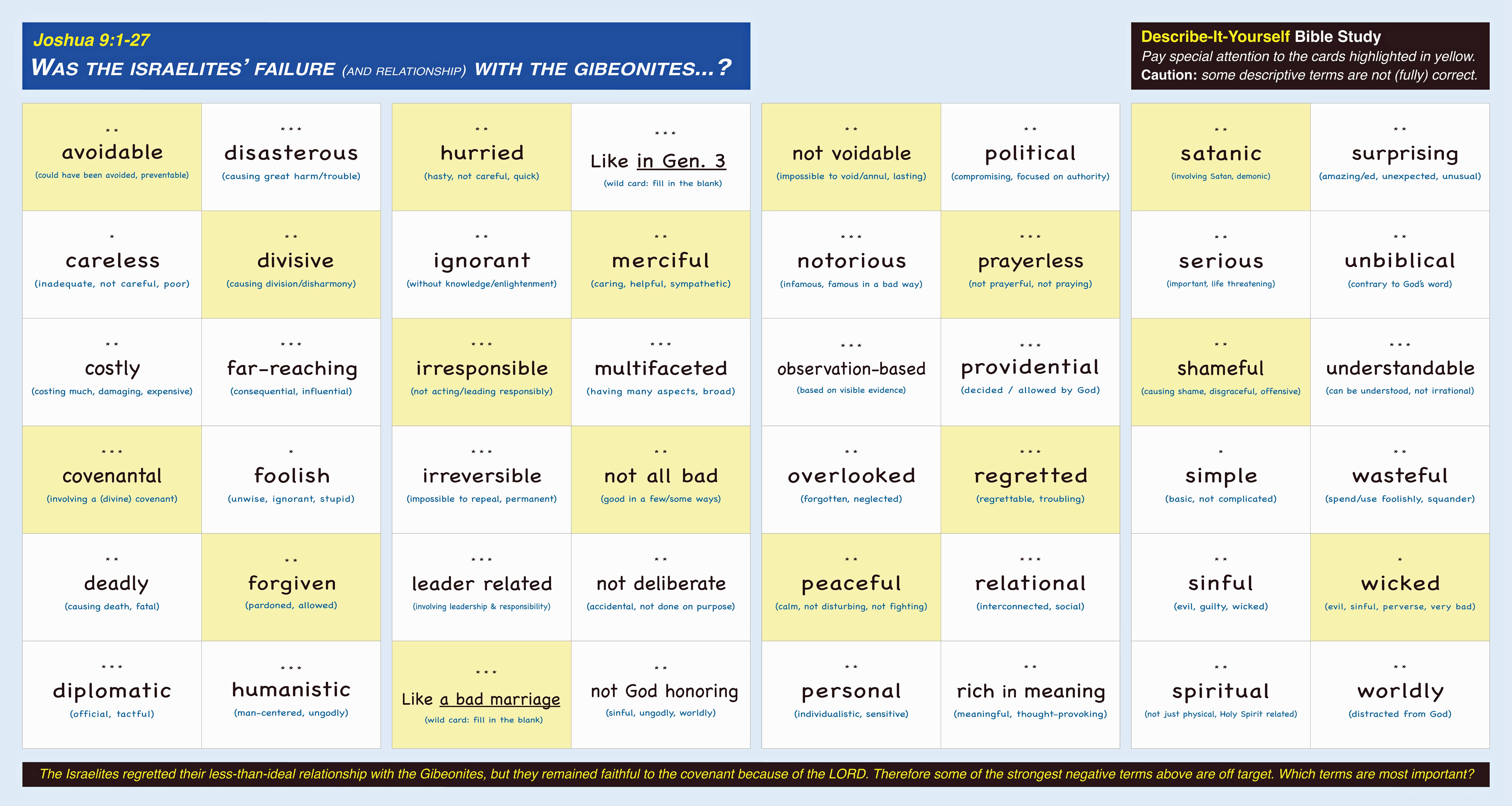 Although the Israelite leaders could have avoided making a covenant with the Gideonites by seeking the Lord about them, once the covenant was made, it was irreversible and could not be made void. So the relationship with Gideon was like a less-than-ideal marriage in which the more spiritual partner takes the lead in keeping the peace and honoring God despite differences.

Though a marriage may begin in a sinful and shameful way it does not need to remain as it began. Likewise, it is incorrect to say that the leadership failure in Joshua chapter nine was because of satanic activity or that the relationship that resulted from the failure was wicked. For sure, the relationship with the Gibeonites was unbiblical by being contrary to God's original plan. Yet, the Lord was still honored to some degree through the work of the Gibeonites as woodcutters and water carriers (9:26-27). So it is correct to say that the relationship was not all bad.

Sadly, Joshua chapter nine is often overlooked because readers and teachers fail to notice how rich it is in meaning and applications regarding marriage in less-than-ideal relationships. 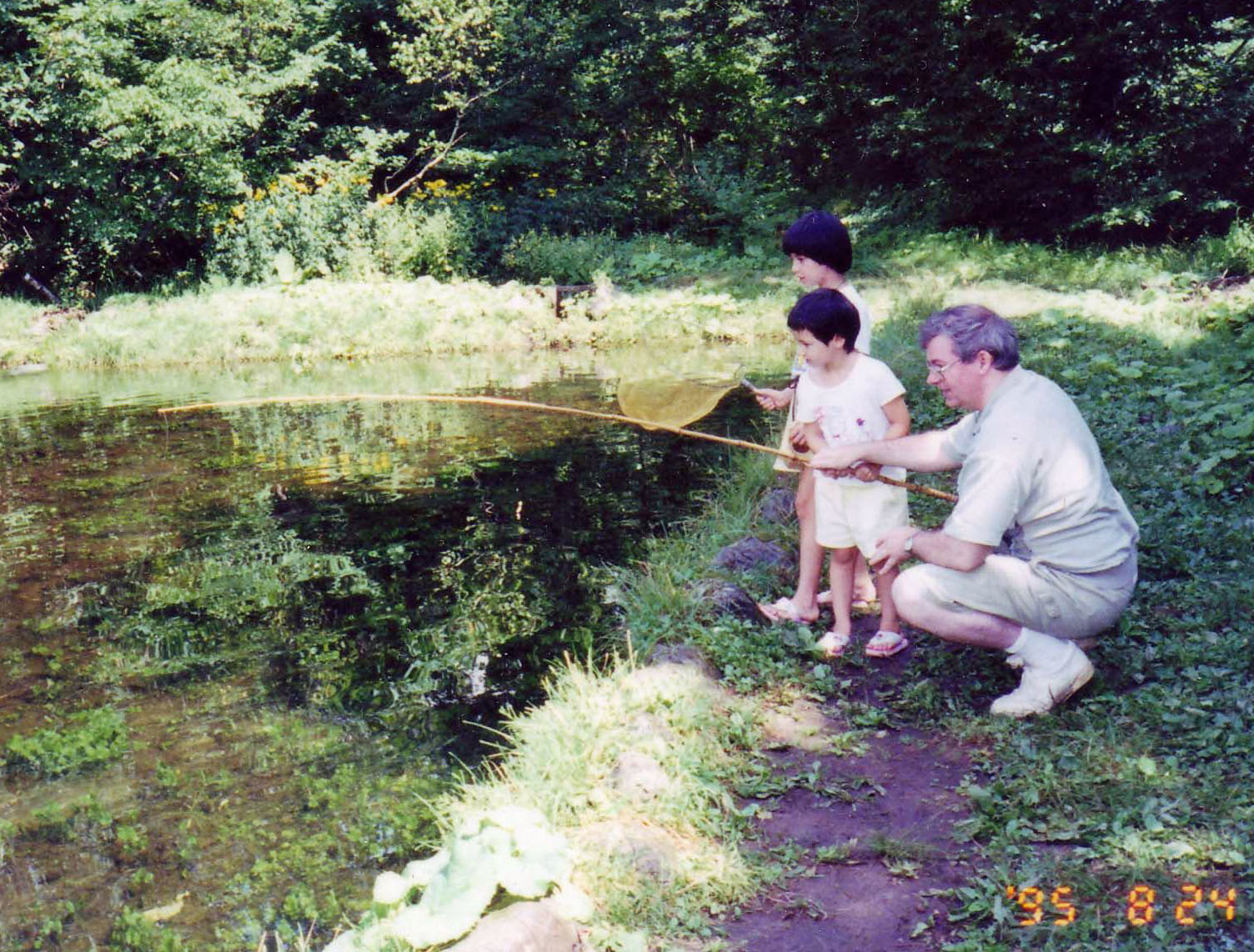 Did Joshua have daughters whom he took to the Jordan River for a pleasant afternoon of fishing? Maybe not. He seems to have had a family (Josh. 24:15), but they lived in a time of war. -- In this photo, Amy (nearly eight) and Yumi (almost six) excitedly prepare to catch a large rainbow trout from a tiny stocked pond. They each caught one, with a little help from their Dad. -- In Joshua, however, again and again, God's people, including the children, saw the Lord help them in various and spectacular ways. The miraculous cutting off of the waters of the Jordan was not soon forgotten (Josh. 4:7), and then there was Jericho. Moreover at the end of the book, Joshua reminded the people of God's miraculous work in the exodus, in the wilderness, and in the promised land (24:6-13). Perhaps Joshua's sons and daughters did not have time to go fishing with their dad at the Jordan, but oh what good and godly memories they must have had!