There is rich variety in these 11 studies in Acts.

Let's describe the ascension. In this debatable and unexpected descriptive terms like those on the cards below (regarding the ascension of Jesus) are often the most helpful because they are the most thought-provoking and lead to great questions and surprising discoveries.

A key first question: Is the ascension of Jesus presented in a glorious way in Acts 1:9-11? Most assume that it is, but is it really? If not, why not? Perhaps the biblical record is not especially spectacular so that the disciples would not be discouraged by seeing God's glory depart. Moreover, Luke presents Jesus as a perfect and prayerful man as well as God. So a less than super spectacular ascension scene fits well with this. It encourages us to pray like Jesus did (1:14). 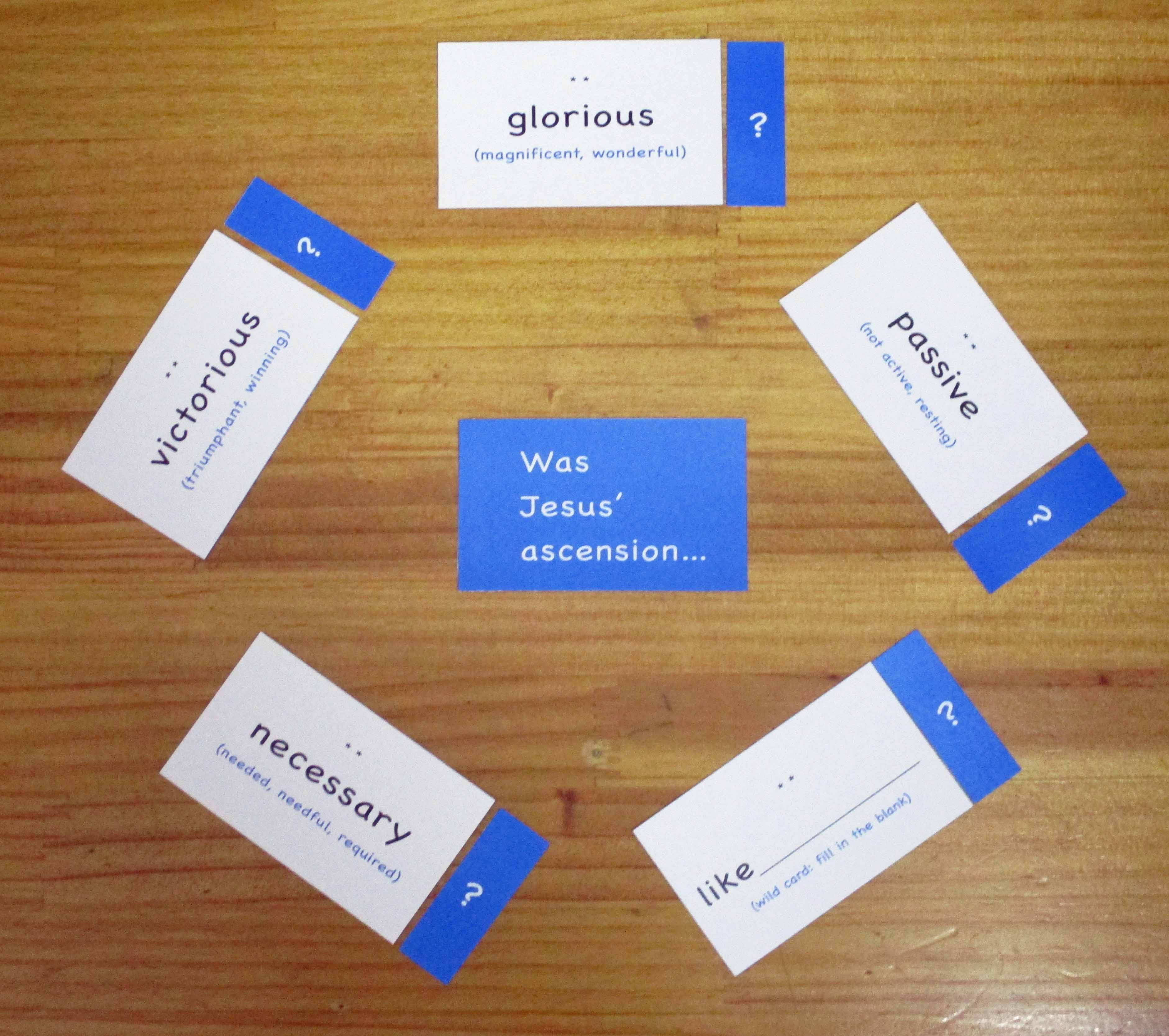 FOUR ADDITIONAL QUESTIONS
1. Was the ascension victorious? (The resurrection was, of course, but our short ascension passage does not say that it was a victory.) 2. Did Jesus ascend to heaven by his own power or was he raised by the Father's power? (The emphasis is different if Jesus was passive rather than active.) 3. Was Jesus' ascension necessary? (Of course, it was, but why?) Finally, 4. What other event(s) in the Bible is / are similar to Jesus' ascension? (The closest parallel may be the translation of Elijah, but there are significant differences.)

ANSWERS
Jesus was taken up by the Father (1:2, 9). So he was passive in 1:9. Therefore his deity and power are NOT stressed. His perfect humanity is stressed instead. Some believe the cloud in 1:9 refers to divine glory, but this view is questionable since nothing special is said about the cloud.

Of course, Jesus returned to heaven as God the Son, but the infinite difference in glory between the Lord and the disciples is NOT stressed. There is no fiery chariot in Acts chapter one like there was when Elijah was taken to heaven. Probably this was to better encourage the disciples and us. -- (Seeing God's glory depart must have been discouraging in Ezekiel chapter 10.)

SPIRITUAL ENCOURAGEMENT
The ascension of Christ in Acts chapter one is inseparably linked to the coming of the Holy Spirit in Acts chapter two. The ascension was necessary so that the Holy Spirit could come. Though WE ARE NOT APOSTLES (1:21-22) and do not have miracle-working gifts like Peter and Paul had, WE ARE still guided and enabled by God's Spirit today. God uses us as we humbly let Him work in our lives day by day. This is very encouraging!

For more encouragement, read Romans chapter eight, where the Spirit is mentioned more than anywhere else in the Bible. Also notice which spiritual gifts are mentioned in Romans 12:3-8. (Speaking in tongues is NOT one of them!) Moreover, the Spirit did not come to replace the Son as the object of our testimony. He came to help us bear witness to Christ (John 16:13, Acts 1:8).

If you do not have a set of the free Describe It Yourself cards please print out a set today and start using the cards to describe portions of the Bible. There is no substitute for doing this yourself.

How would you describe the early church in Acts chapter four? Many terms in the Describe It Yourself card set are appropriate. It was big, caring, courageous, confident, effective, evangelistic, instructive, knowledgable, prayerful, serious, spiritual, and truthful, for instance, but these many terms can be summarized well with just three terms. The early church was biblical, bold, and brotherly.

How would you describe the Jewish leaders in Acts chapter four? Many terms in the Describe It Yourself card fit them well, since they were angry, arrogant, coldhearted, critical, dangerous, defensive, fearful, hostile, negative, powerful, selfish, skeptical, social, tricky, ungodly, vocal, and worldly. Yet these many terms can be summarized well with the three terms shown below. The Jewish religious leaders were political, proud, and perverse.

Contrasting these two summaries, it is obvious that the early church was the positive, polar opposite of the Jewish religious leaders. First and primarily, the church was biblical but the Sanhedrin was political. Second, the prayerful church was bold because of their biblical faith, but the Jewish counsel members were proud and condescending based on formal religious training (4:13). And third, the early church members shared with one another in a brotherly manner, but the coldhearted Jewish rulers did not really care about the man who had been healed (4:16-17). So they and their rulings were perverse.

Today as well, smaller and newer biblical churches often contrast sharply with larger and older religious organizations that are run by highly educated but proud officials who are more concerned with power struggles and authority within their group than with biblical truth.

If you do not have a set of the free Describe It Yourself cards please print out a set today and start using the cards to describe portions of Bible. There is no substitute for doing this yourself.

This is the first of three W.A.L.K. Bible Studies in Acts. As always the third (L) step is what makes this method of study special. So what was the evangelization of the eunuch like or unlike?

This is the second of three W.A.L.K. Bible Studies in Acts. As always the third (L) step is what makes this method of study special. So what was Peter's prison break like or unlike?

It is shocking that Sergius Paulus is hardly mentioned in the New Testament, since he is the highest ranking Roman official to believe in Jesus in the Book of Acts.  This study is the first of three Lesser-Known but Significant Leaders studies in this book.

Jason played a key role in the beginning of the church at Thessalonica. He was apparently a wealthy believer with good connections. (He may be the same as the Jason in Romans 16:21.) This is one of 20 studies in the Lesser-Known but Significant Leaders series.

Lesser-Known LeadersJason and the Mob

There were two basic and closely related points in Paul's evangelistic message to his scholarly and philosophical audience at Athens. First, he told them to seek God (17:27) instead of just being religious (17:22). They desperately needed to do so because their idolatry showed that they were woefully ignorant of the Creator. Though they were constantly seeking to know new things (17:21), they had not seriously considered the most basic truth about all things and all people.

Even some Greek poets had said that the Creator must be personal since people are (17:28-29). Using this as extrabiblical support, Paul taught that the Creator was to be sought because he is knowable and near rather than metallic or far away.

Second, Paul taught that everyone, everywhere needs to repent because God has acted and appointed a time and a Judge, the God-Man, to judge the world righteously (17:31). In God's wisdom, everything from earliest times had been leading up to this, since time is linear rather than cyclic (17:31) as most Greeks believed. The resurrection of this special Man (Jesus, 17:18, 31) was the great proof that the special righteous Judge had come.

In all this, Paul stressed that his two related points apply to all people. He had been accused of being a proclaimer of foreign gods (17:18) since Greeks did not believe in physical resurrection, but his message was universal in scope. All men everywhere needed to repent (17:30).

Since God is righteous and we are not, and because God is actively working in all things to bring about his will for creation, we each must repent. Seeking to know God, rather than merely seeking to gain knowledge for knowledge sake, is a key aspect of this repentance.

If you do not have a set of the free Describe-It-Yourself cards used in the above summary diagrams, please print out a set and start using the cards to describe various portions of the Bible. There is no substitute for doing this yourself.

This is one of 20 studies in the Lesser-Known but Significant Servants series.  It shows that lesser-known people, including children, are an important part of God's work.

From ancient times lawyers have been better known for their speaking ability than for their honesty. Tertullus is a prime example. This is one of three studies in the Lesser-Known but Significant Leaders series based in the Book of Acts.

This is the third of three W.A.L.K. Bible Studies in Acts. As always the third (L) step is what makes this method of study special. So what is Acts chapter 27 like or unlike?

This is one of eight I.D.E.A. Bible Studies on decision making. Going against Paul's advice, the centurion disastrously decided to leave the port at Fair Havens (Acts 27:9-12). The focus of this study is this bad decision early in the chapter and the good one to spare the prisoners at the end of the chapter.

The ending of Acts can be described using many of the Describe-It-Yourself cards. Much of what is in Acts 28:23-31 is / was about Jesus, about salvation, evangelistic, important, instructive, knowledgable, life-changing, persuasive, providential, thought-provoking, and a warning. Much could be said about all these things, but the three contrasting pairs shown below probably deserve special attention.

First, the negative disbelief of many Jews contrasts sharply with Paul's positive prediction regarding Gentile faith. Second, the climactic declaration that the salvation of God had been sent to the Gentiles (28:28)—and the quote along the same line from Isaiah in 28:26-27—contrasts with the open-ended nature of Paul's ongoing preaching and teaching in the final verse (28:31). Third, the disbelief and debate among the Jews was sad (28:24, 29) and unproductive, but Paul was hopeful (28:28) and his ministry was unhindered and forward looking (28:31).

What is your favorite descriptive term or phrase to describe the ending of Acts? Whatever it is, it should reflect the positive and forward-looking way the book ends. Unlike Genesis, Deuteronomy, Joshua, it does not end with the death of a spiritual leader. The work for God continued.

If you do not have a set of the free Describe-It-Yourself cards please print out a set and start using the cards to describe portions of the Bible. There is no substitute for doing this yourself.