The Shulamite is Important.

Did you know that the Shulamite, the beloved bride in Song of Solomon, is the sixth most mentioned woman in the Bible? Of course, she is not mentioned by name, but the bridegroom addressed her in many loving ways. 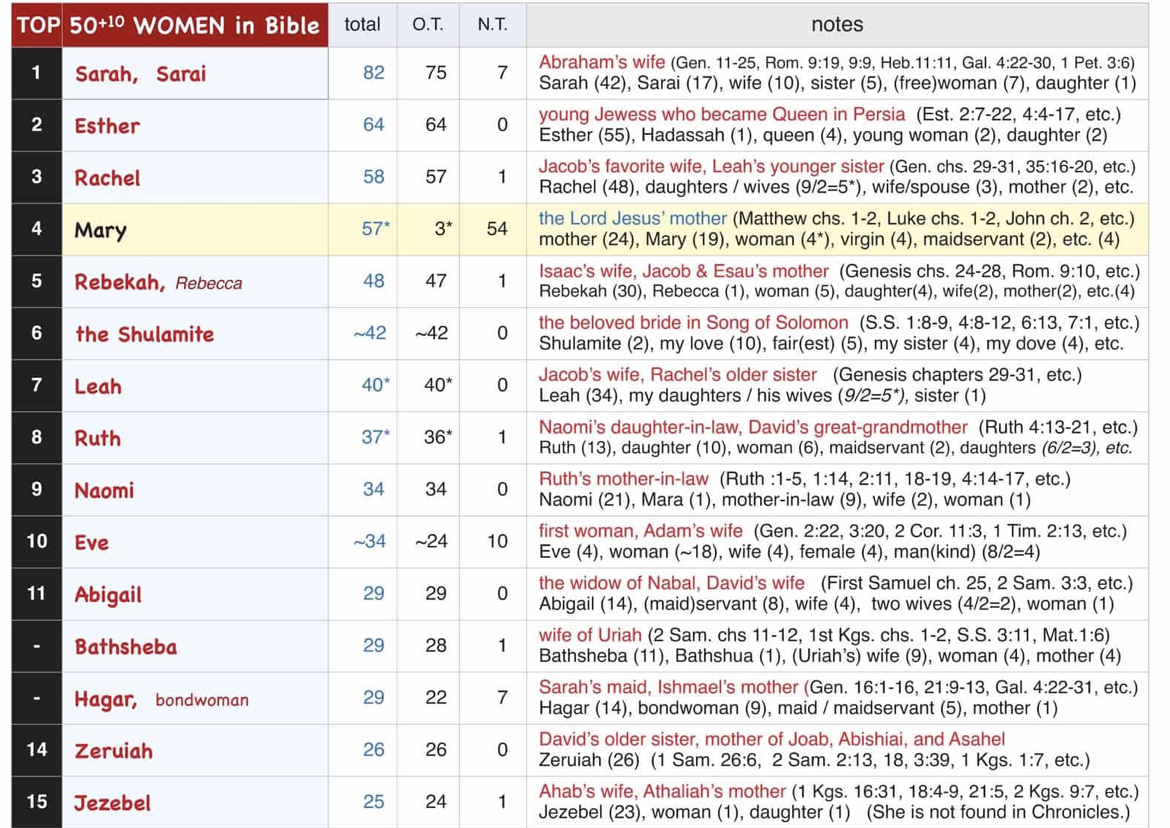 Therefore the Song of Solomon should not be neglected even though it is controversial and difficult to teach without some helps. A good study Bible will make it much easier to understand.

For a great study on the Shulamite and her relationship with Solomon, consider the worksheet below, after reading through the book with the help of a study Bible, 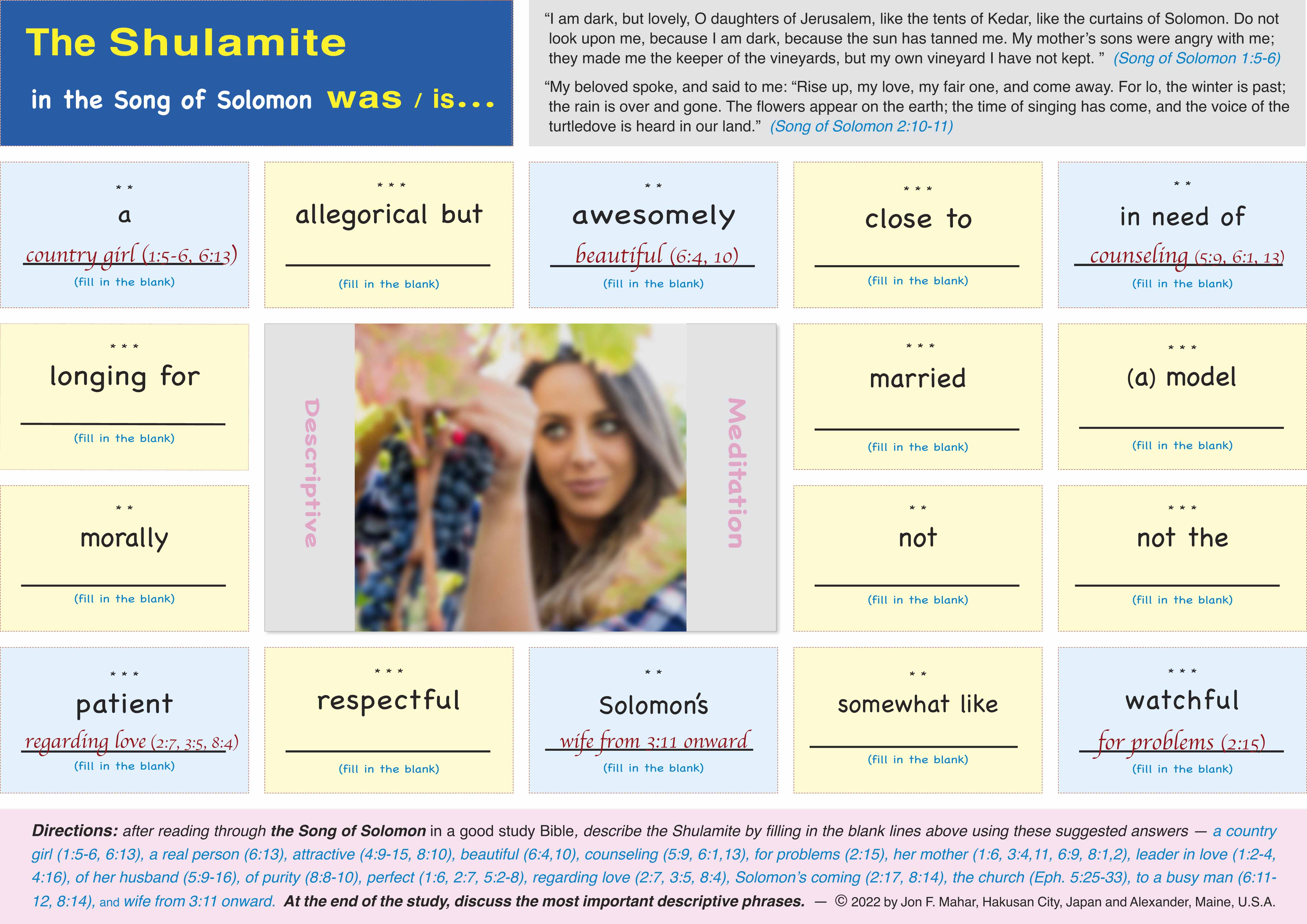 Although the Shulamite was awesomely beautiful (6:10) and respectful of her husband, she was not perfect. Moreover, she was married to a very busy man. So there was stress in the marriage as well as love. Even so, the bride was somewhat like the church, especially regarding her longing for her husband's return. (Notice the similarity between Song of Solomon 8:14 and Revelation 22:20).

As a newlywed, the Shulamite obviously did not have any children. So she may not have been as busy as her husband. Thankfully, at that point, there were no other wives, but Solomon was still a young man with many interests, agricultural and military (6:11-12). Counseling was needed, and the daughters of Jerusalem counseled the new bride by asking her questions (5:9, 6:1). The relationship was fully restored in chapter seven.

Yet, the Shulamite was not the mother of Rehoboam (2 Chronicles 12:13). We do not know why, but as Solomon's beloved first wife, we would have expected her to be the mother of his heir. She was not. Something happened. So sadly the Shulamite's words about love and jealousy in 8:6-7 can be taken as a warning.

8:6  Set me as a seal upon thine heart, as a seal upon thine arm: for love is strong as death; jealousy is cruel as the grave: the coals thereof are coals of fire, which hath a most vehement flame. 8:7 Many waters cannot quench love, neither can the floods drown it: if a man would give all the substance of his house for love, it would utterly be contemned.

Solomon is often remembered negatively because of the way his life ended and because of his many wives. Nevertheless, the Shulamite should be remembered as a model of purity (8:8-10) since she was attractive morally as well as physically. There is much to be learned about love in marriage from her.
In line with this, the Shulamite speaks more than Solomon. Her perspective is stressed. Yet, even so, she was not the leader in love (1:2-4). He was, but he did not force his attention upon her (4:16-5:6). She was loved and respected.

How Should the Song of Solomon be Interpreted?

Some use Solomon's special book to teach about the love of Christ for the church, but to do so one must broadly "apply" the actual content. Solomon obviously wrote about his love for the Shulamite who was a real woman. He often referred to her as "my sister, my spouse" especially in 4:8-12, perhaps the most intimate passages in the entire Bible, especially when taken together with 4:16 and 5:1.

4:10 How fair is thy love, my sister, my spouse! how much better is thy love than wine! and the smell of thine ointments than spices!  (Song of Solomon 4:10)

Some may argue that since the Shulamite was not Solomon's literal sister, it is ok to look beyond the physical relationship and speak of spiritual intimacy. In part, yes, but I believe there is a better way. -- Why not instead simply say, "If the God-given physical relationship in marriage which is described in Song of Solomon can be so wonderful (4:9), how much BETTER will each believer's relationships be with other believers and with the Lord Jesus in eternity where marriage, physical relations, and sin no longer exist?!"

20:35 But they which shall be accounted worthy to obtain that world, and the resurrection from the dead, neither marry, nor are given in marriage:  (Luke 20:35)

Many people either never marry or become single again because of the death of a spouse. Many will lose a loved one (for a while) which is, of course, very difficult, but if they know the Lord, the future in heaven will be far BETTER for them (Phil. 1:23) just like it will be for every believer.

So let's take the Song of Solomon as it was originally intended, to show the emotional and physical nature of courtship and love in marriage on earth, which always has it's ups and downs, but in the process let's not forget that eternity in heaven will be far better for every believer, whether they were ever married on earth or not. 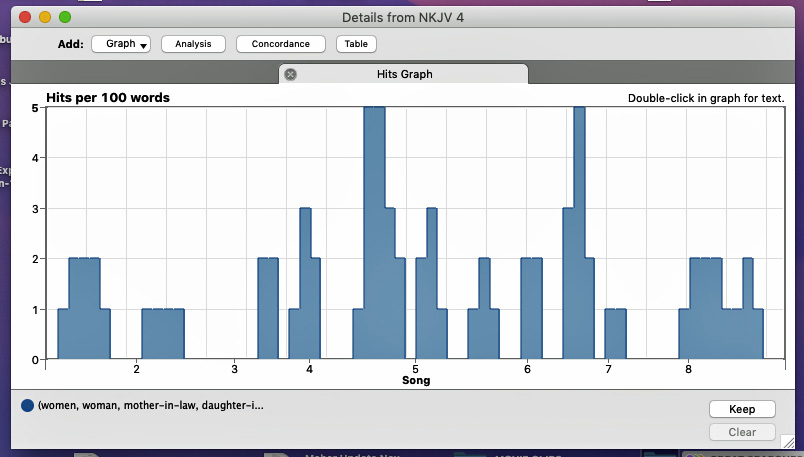 This graph shows where the various terms for women are used in the Song of Solomon. The high points are in 4:8-12 and 6:8-9.

The Shulamite & Her Brothers

The PLUS Bible study method which focuses on both negative and positive aspects of the story is used in this study. There are 15 lines on each worksheet which are to be judge as correct (C), incorrect (X), or partly correct (△). Some lines are correct in one way but incorrect in another. Answers and applications are found on the fourth page. 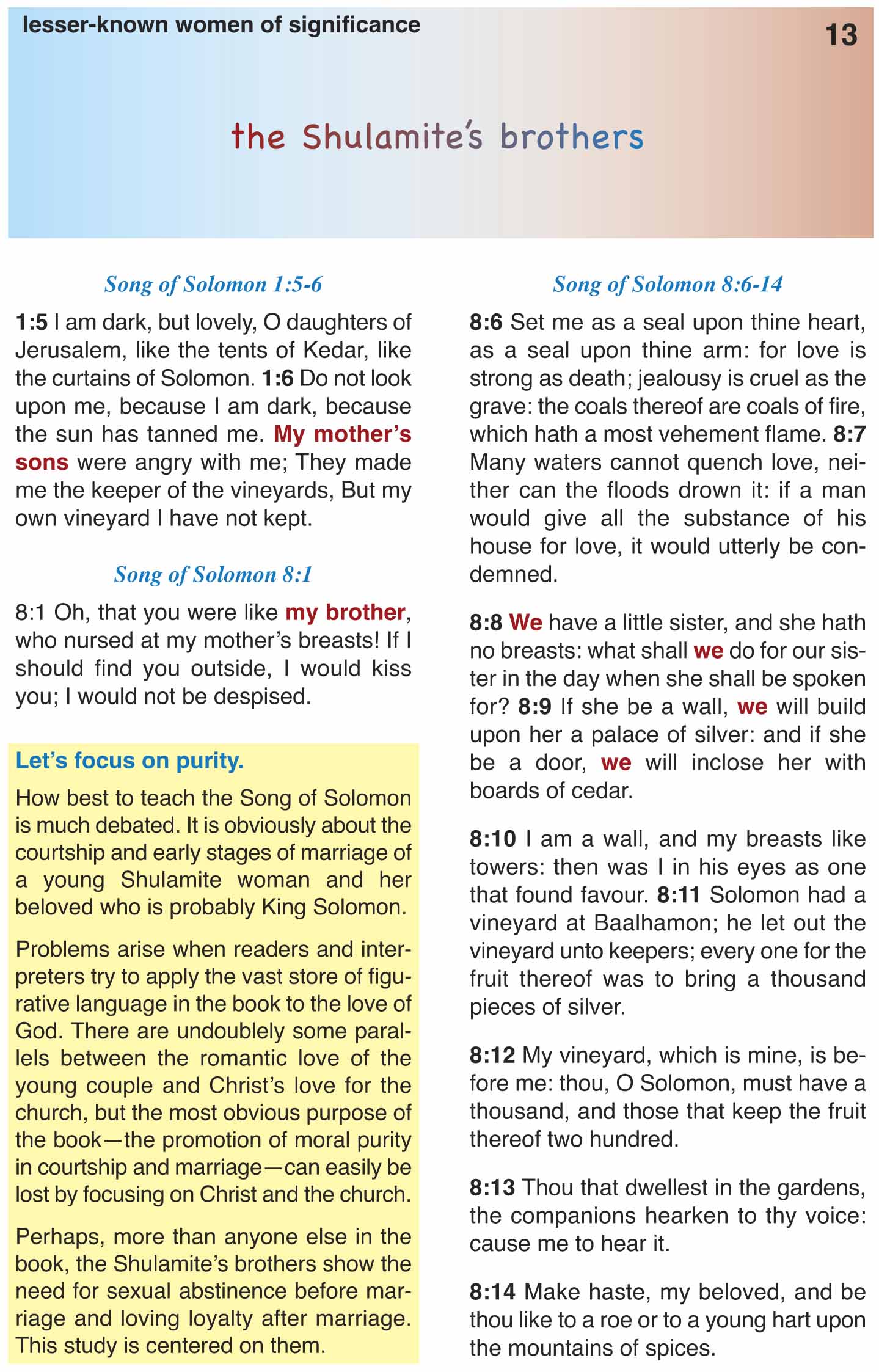 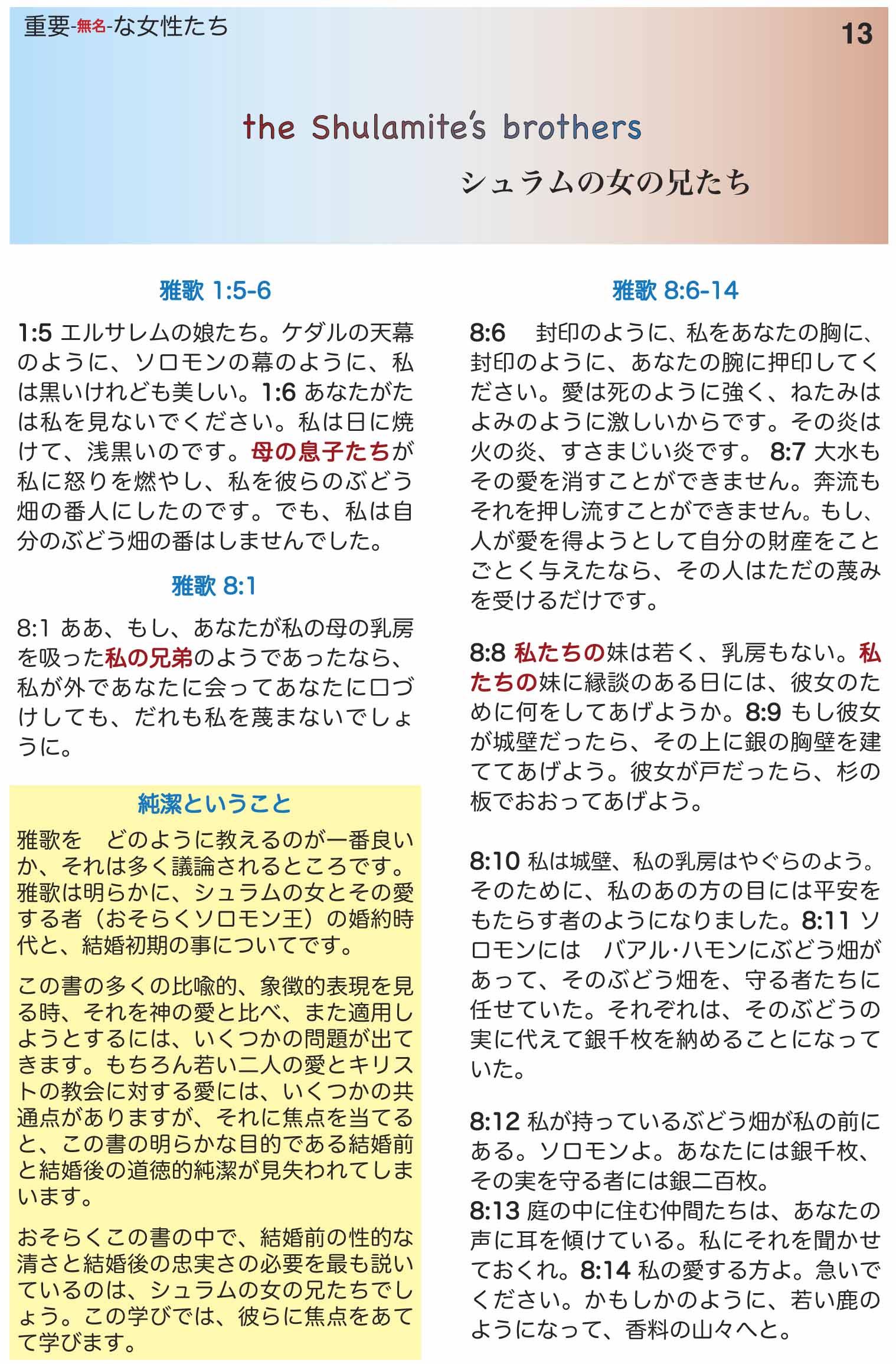 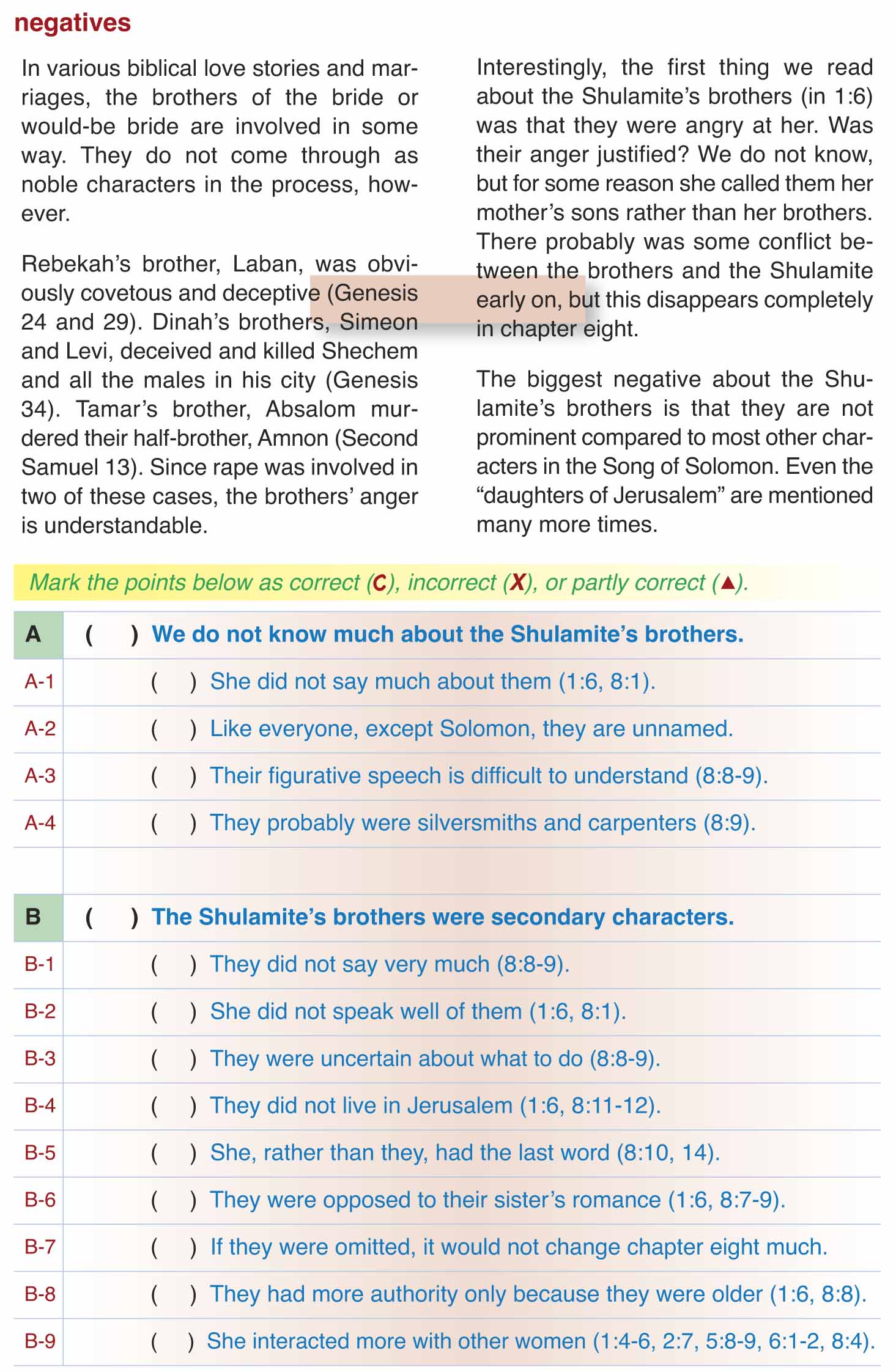 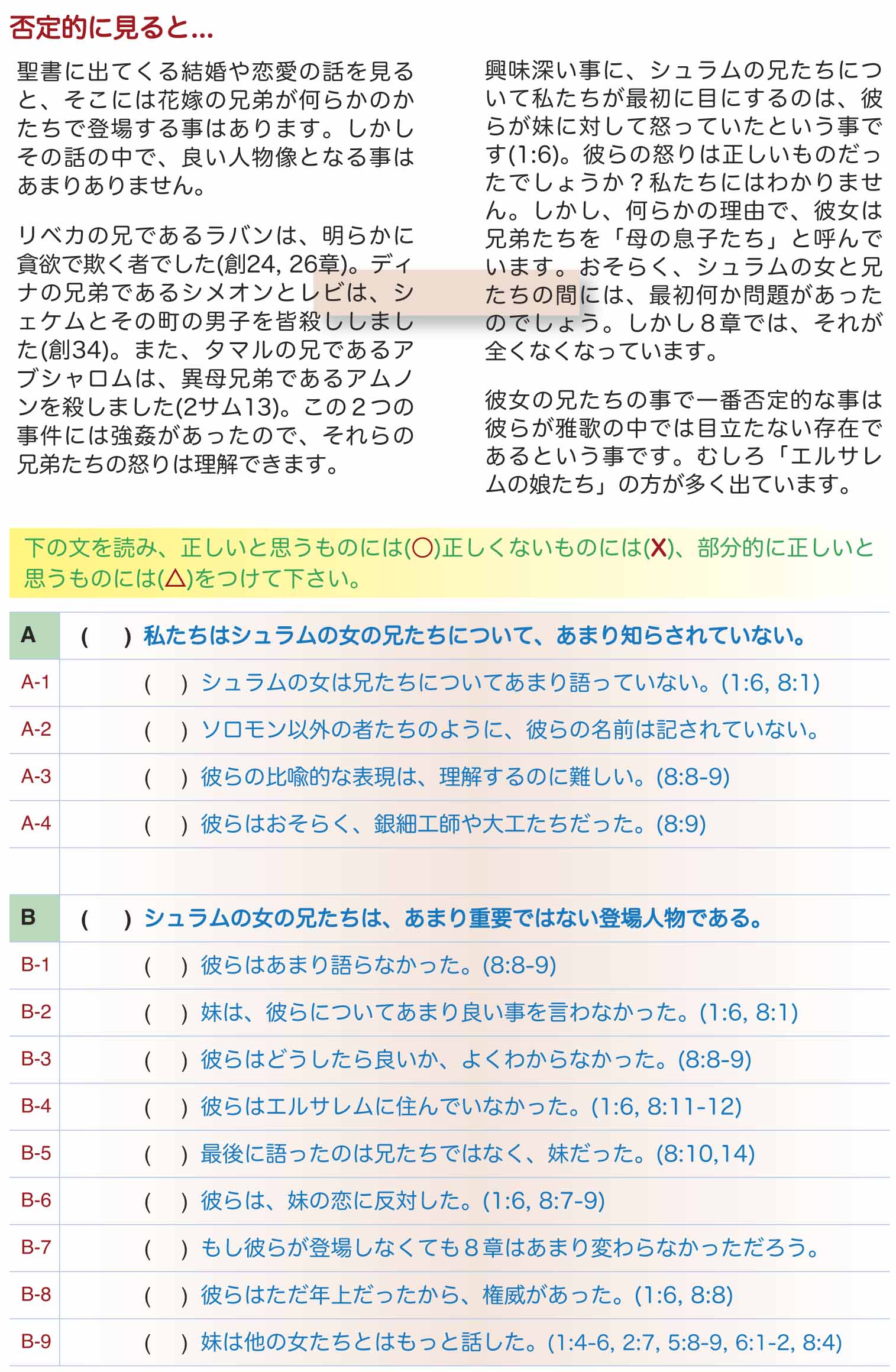 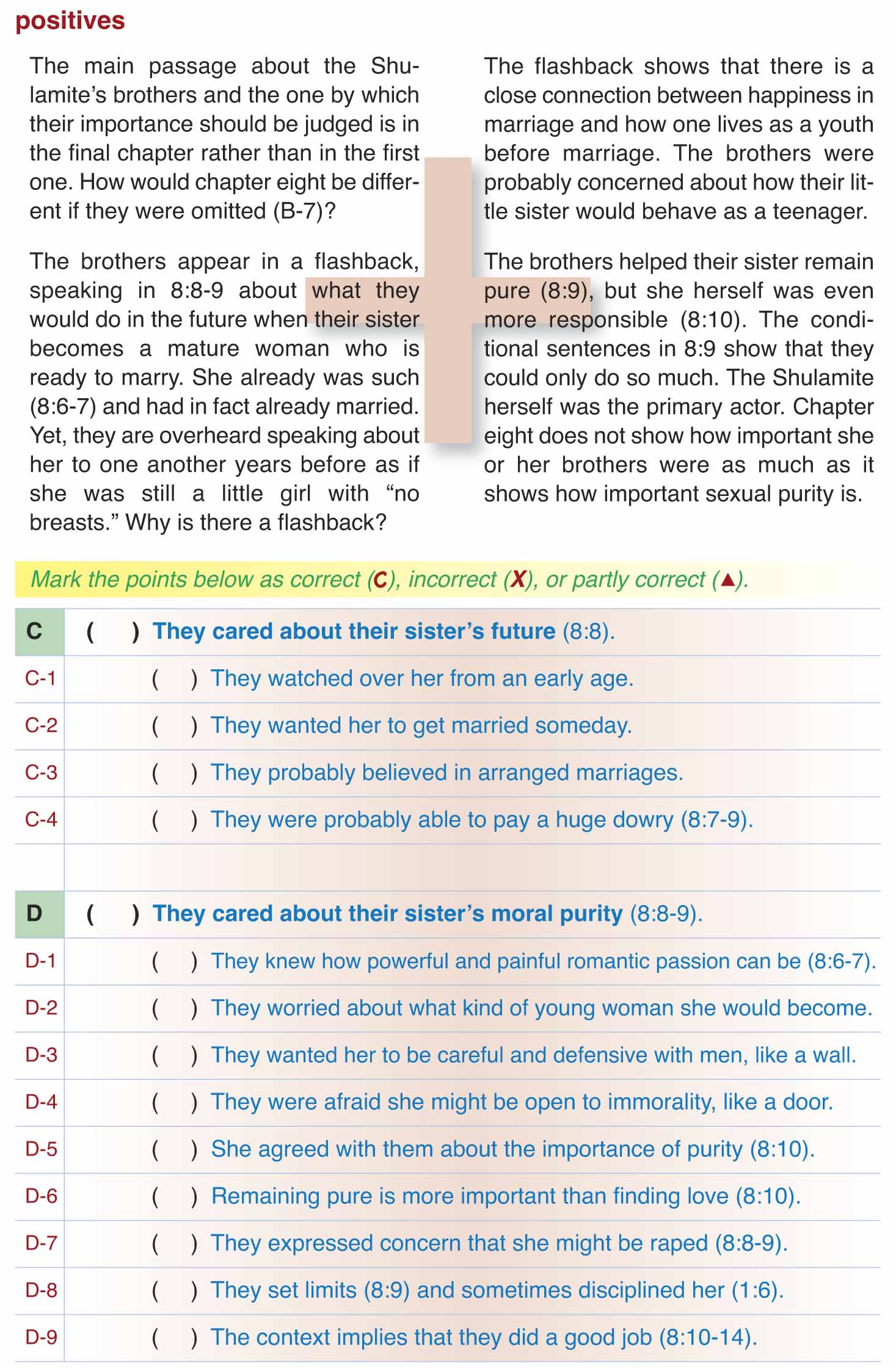 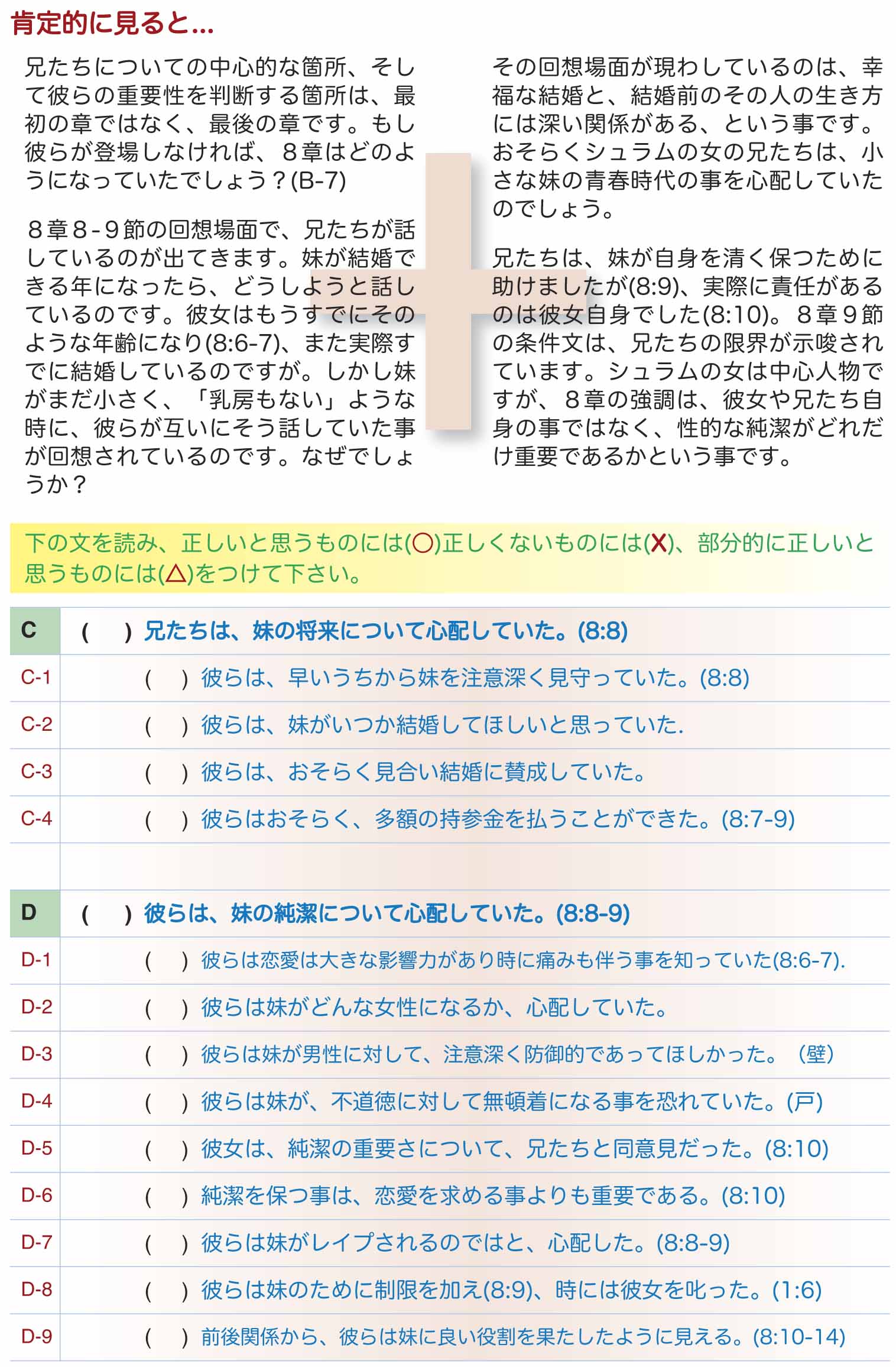 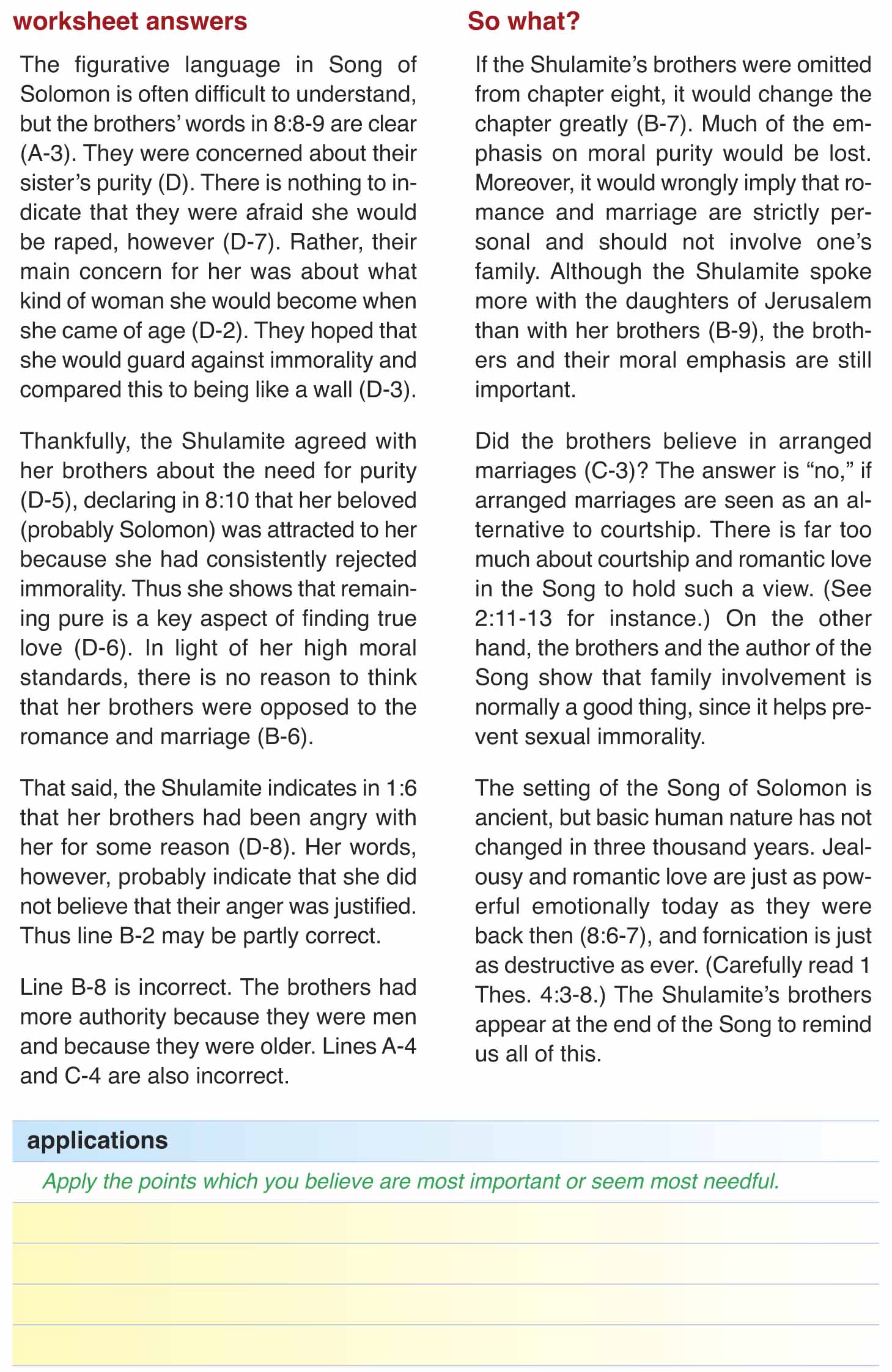 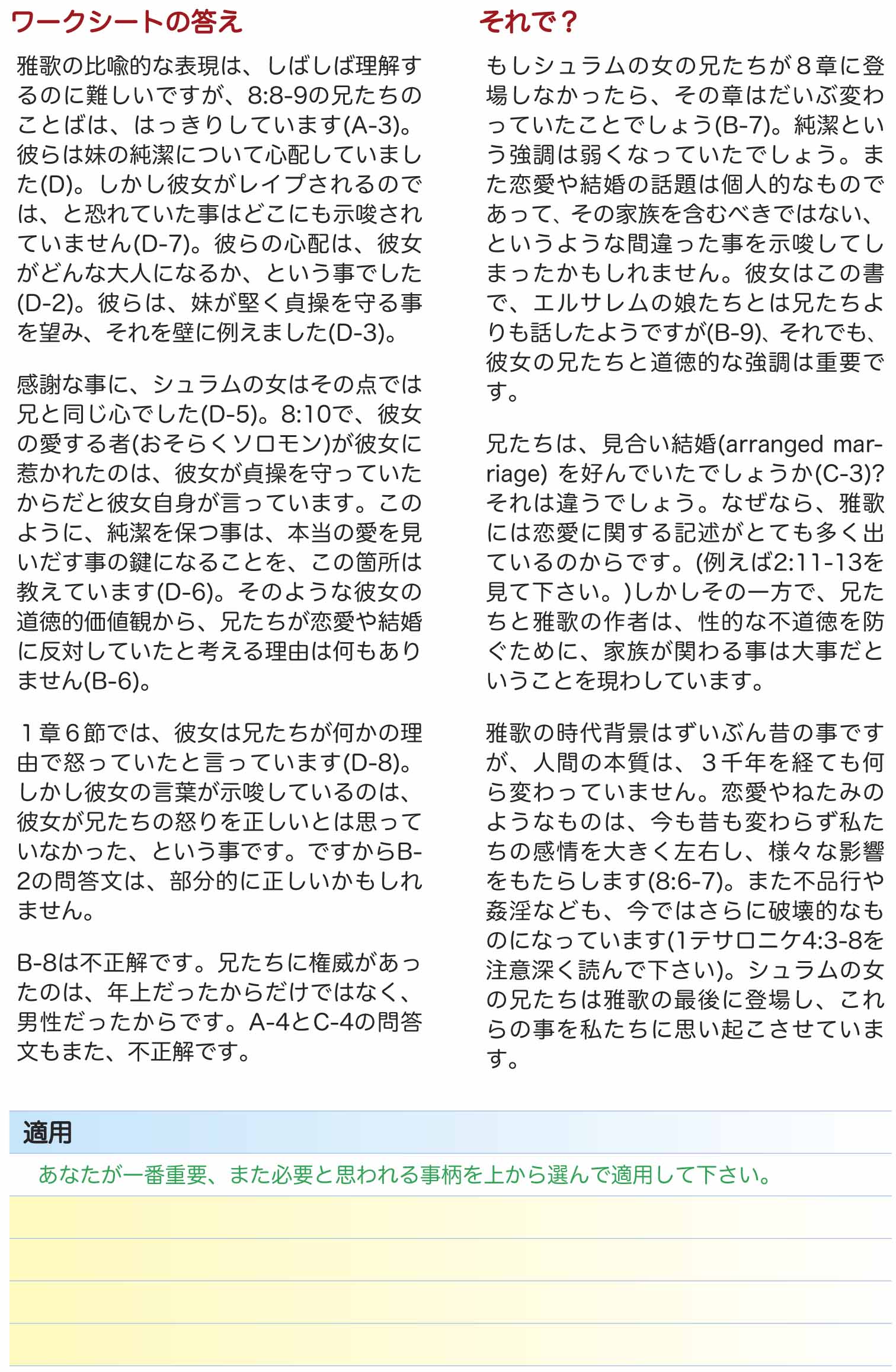 Click the links above for the full four-page PFD files for this study.