Studies on Questions Asked in John

There are many questions in John because of the debate about Jesus as God in the flesh. This reached a peak in chapter seven as shown on the graph below. Describing selected questions asked and / or answers given thereto is a great way to study through the Gospel. There is a sample study using this method below. 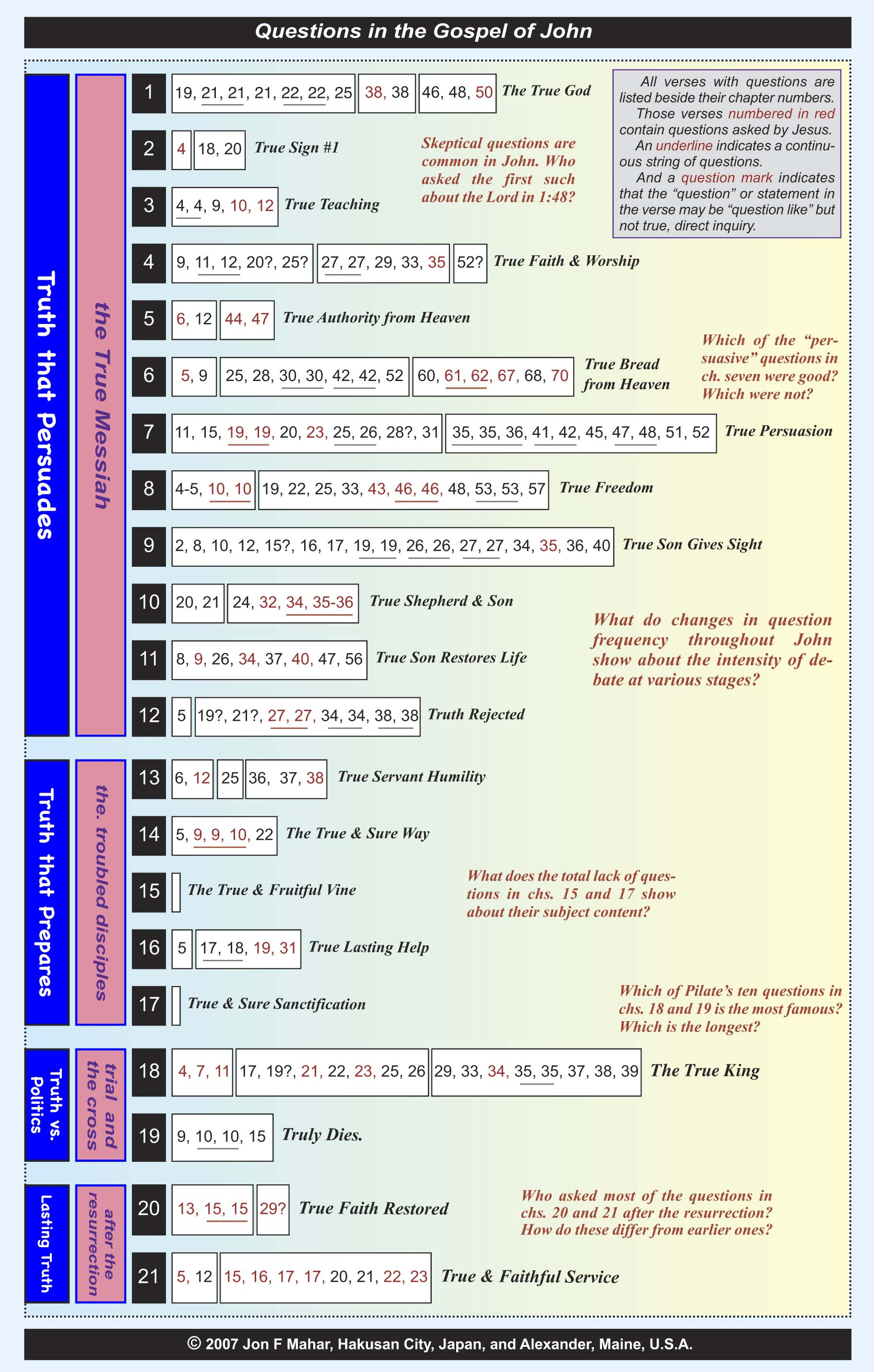 John 1:46 "Can any good thing come out of Nazareth?" Nathanael's question about Jesus and Nazareth was short, blunt, and negative, but that does not mean that it was bad. The card layout below shows that his question had it's good and bad side. The right side shows that his superficial bias against Nazareth in the question was problematic, but the big problem was his ignorance of Jesus. So Philip wisely simply said, "Come and see." 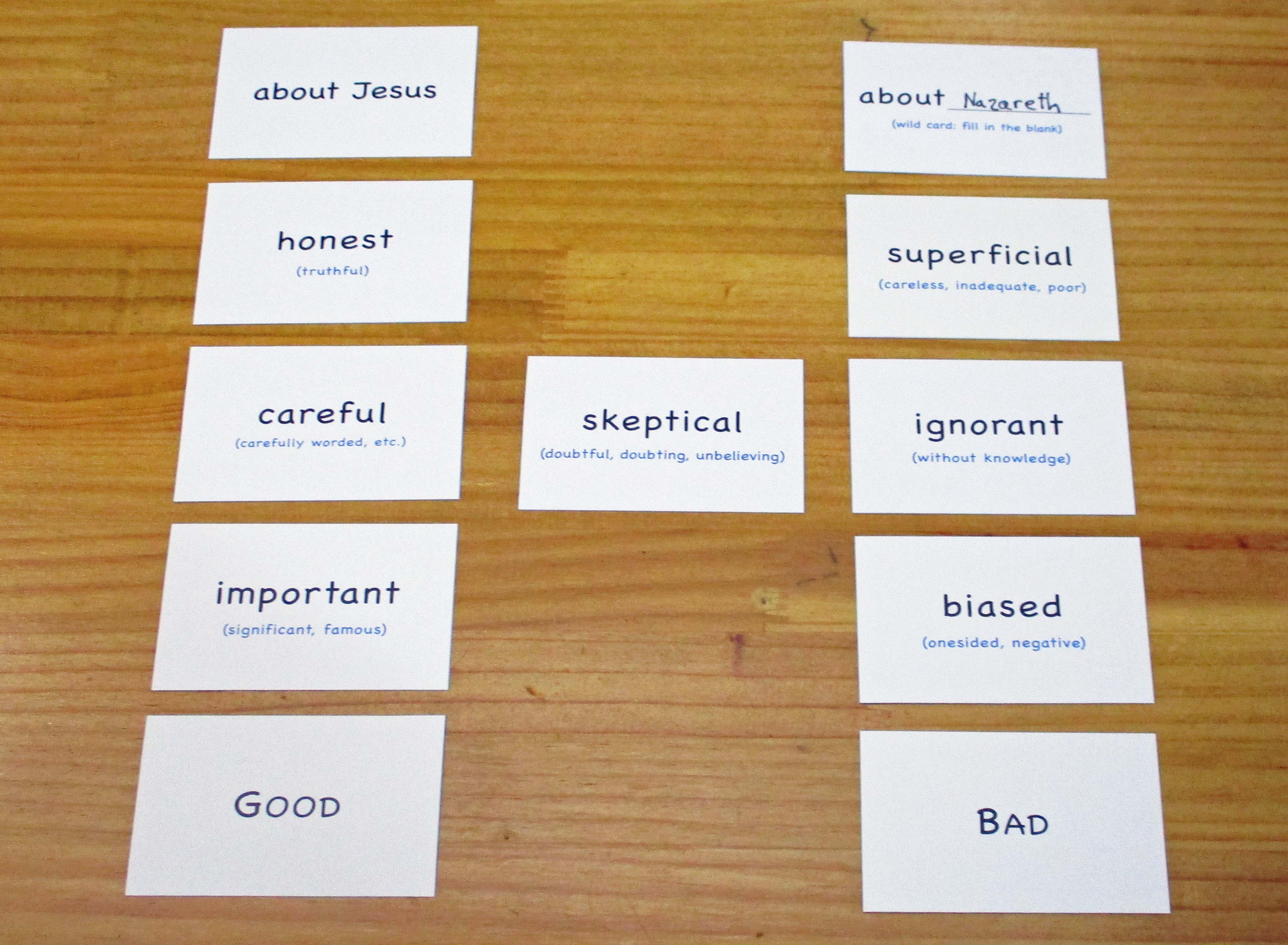 Being skeptical is not necessarily bad. So the skeptical aspect of Nathanael's question is shown midway between the good and bad row. It was good that Nathanael was careful about Jesus' identity. (There had been false Messiahs who had deceived many.) Thankfully, Philip introduced him to the True Messiah. So Nathanael soon believed after his initial ignorance was removed. His question was an honest one as the Lord himself indirectly said (1:47). The "H" shape above stands for honesty.

Using Describe-It-Yourself cards to visually describe the questions and answer in John like above is an interesting way to explore and teach through the Gospel. There are 1,300+ Describe-It-Yourself cards to choose from. So it is not difficult to find ones that are appropriate for the various questions and answers. There are also "wild cards" which can be filled in as needed. The "About Nazareth" card above is one of them.

For the Describe-It-Yourself cards or Fast-Scroll List click the links below. For more ideas on how to use the cards go to the Question Studies page.

In addition to the study on questions, there is a commentary on John. It is unique because the comments are provided through fictional characters who reflect various points of view. This was originally a 300+ page book, but it is now being abridged for easier distribution. See the sample studies linked below. 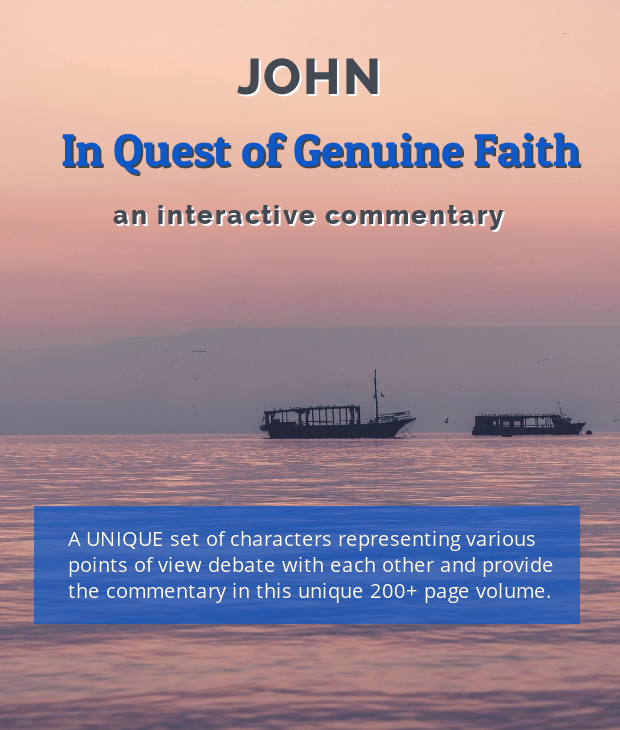 A diagram from the study on the nobleman in John chapter four Genuine faith usually has a background story as well as a point of decision.