Check out these five encouraging studies.

The Greeks were known for their pursuit of wisdom. So it is not surprising for wisdom and wise to be key terms in the first four chapters of First Corinthians. Yet many of Paul's points about wisdom are negative, such as against the use of humanistic rhetoric and man-centered boasting which were common in Greek culture.

Though most of those in the Corinthian church had been saved, there was a natural tendency for them to think of the church in light of their past cultural experiences. So as they had in the past favored certain philosophers and orators over others, they had begun to choose between various church leaders as well (1:10-13, 4:6). This was disregarding the fact that the true wisdom and power of God are ours in Christ alone (3:21-23).

In the summary chart below, negative points are shown with gray backgrounds near the top, and positive points about Christ, the gospel, etc. are shown with red backgrounds in the middle. Points having to do with the bottom line have light brown backgrounds and are the bottom. Instructions on how to use the chart are at the bottom as well. Special attention should be paid to the commands in 1:31, 3:18, and 3:21. Like Paul, all believers are to be wise fools for Christ rather than crafty seekers of worldly honor and profitable connections (3:18-21, 4:8-13). 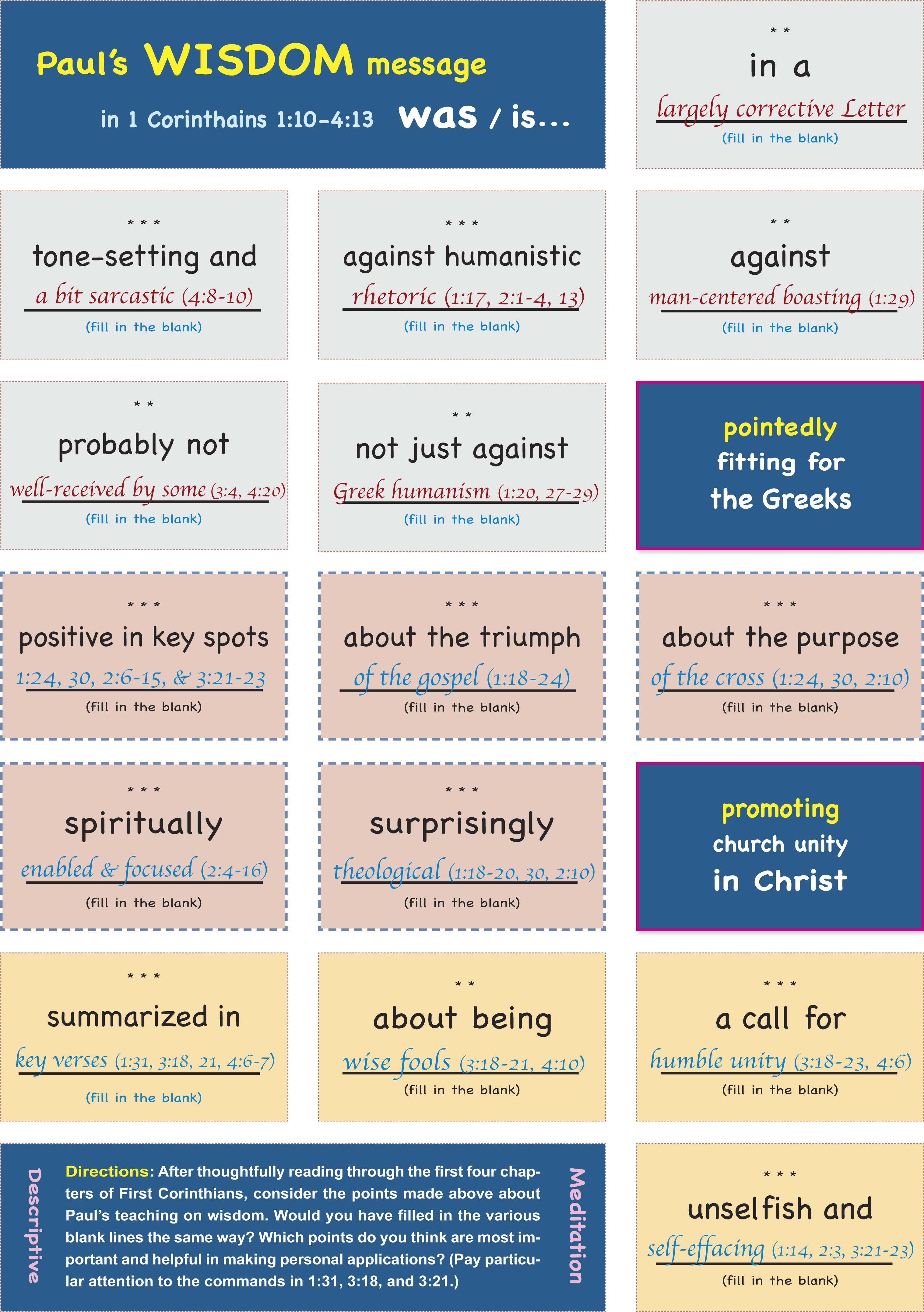 Unlike chapter 13, chapter five of First Corinthians if far from popular, since Paul's exhortation to the church on how to deal the incestuous man in their midst is far from pleasant reading. Yet, the man's shocking sin needed to be dealt with quickly, and that is probably one reason why it is mentioned faily early in the book.

There are two worksheets in this study. The first one is on the man himself and shown below. The second one (not shown) is focused on the church and why the people were reluctant to excommunicate the sinful man. There were cultural and social factors involved, and First Corinthians is a great book to study in order to see how social and cultural factors can effect the church in a negative way. The other Double-Top Bible Studies are socially-sensitive as well. 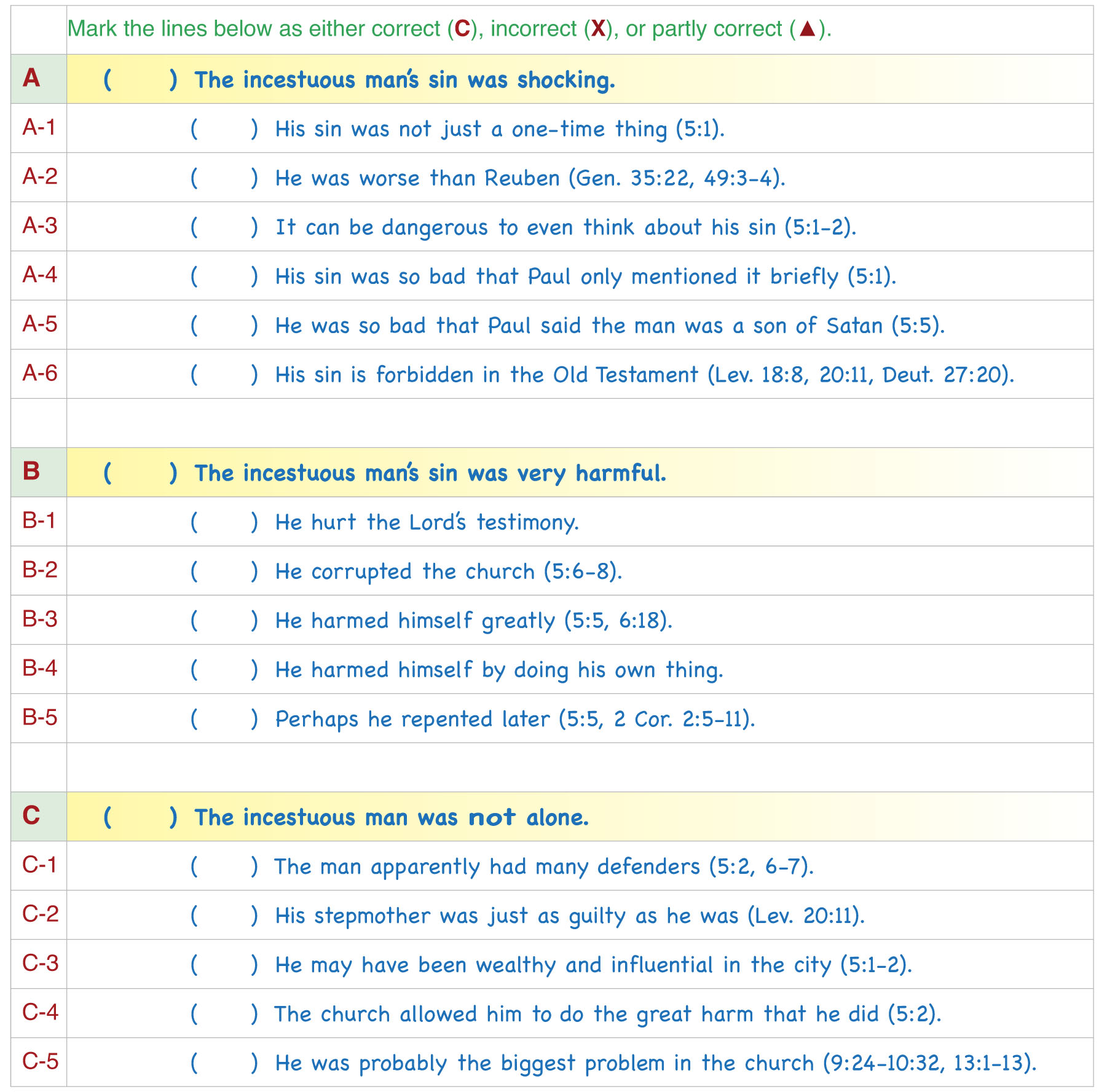 First Corinthians chapter 13 is well known in a way, but there are many important things about the chapter that are easily overlooked. It is not about love in general, but was aimed at changing the sinful situation in the Corinthian church at the time. Similar selfishness still exist in churches today. The worksheet for this Godless-Times Bible Study is shown below. It is part of this set of studies because God is never or rarely mentioned in the chapter and because there are far more negatives in the chapter than many realize. To a great extend, the chapter is about what love is not. By all means, check out the entire study (button below) in order to see the answers to this worksheet and much more. 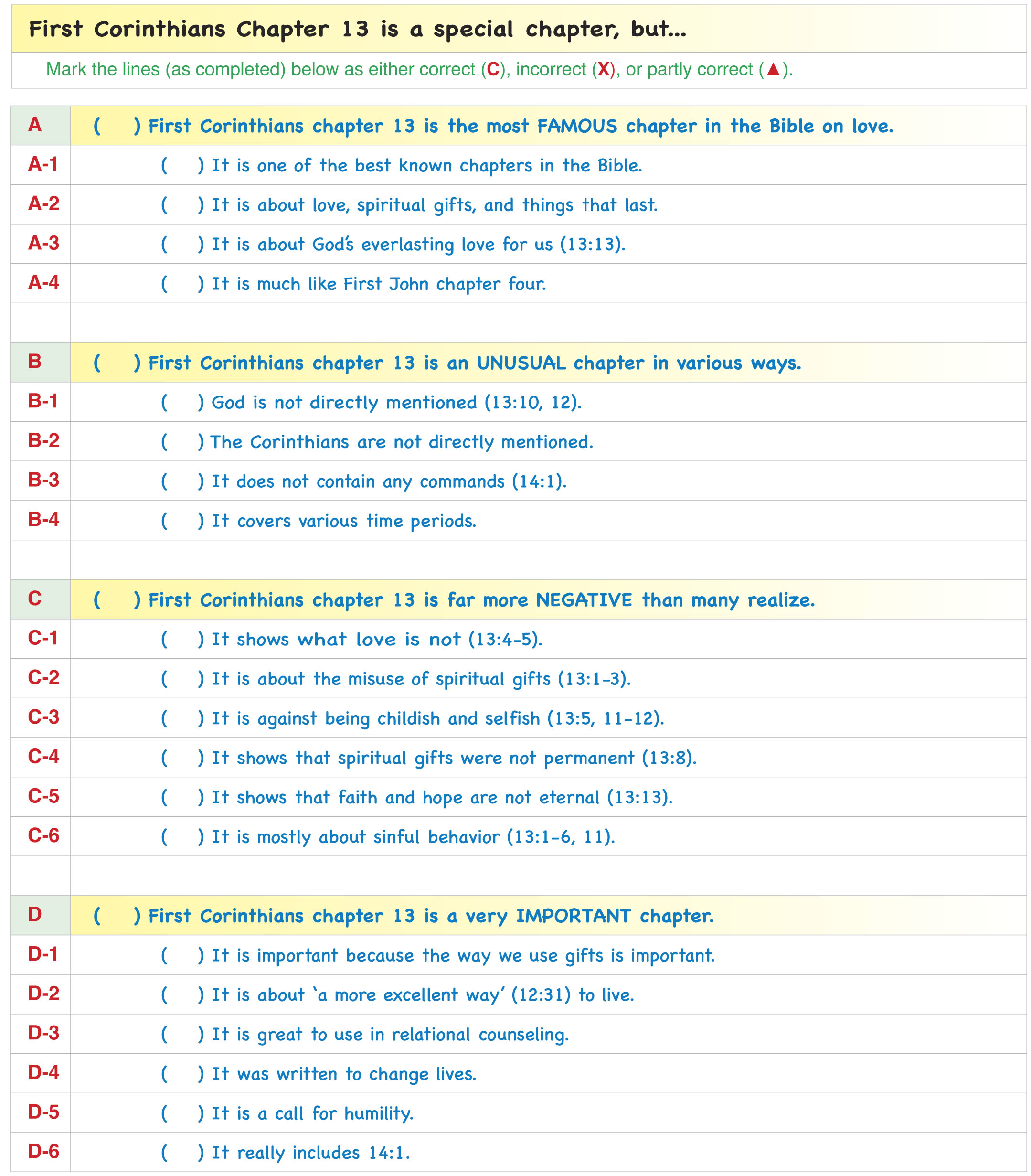 First Corinthians chapter 15 is about the reality and importance of Christ's physical resurrection, and the closing, climactic section in verses 50 through 58 is about the rapture. This is fitting, of course, since the rapture will involve the resurrection of the physical body of those who have died in Christ.

In this study, we will think about how Paul described the removal and transformation of believers in 1 Cor. 15:50-58 and 1 Thes. 4:13-18. We will also think about how the rapture is understood and described by Christians today. Sadly, the descriptions are often NOT the same.

The worksheet below has 40 Describe-It-Yourself cards. Several of the suggested terms and phrases are a bit tricky and likely to promote lively discussion. Will the rapture really be conditional, deliverance, disruptive, healing, hidden, loud, nocturnal, spectacular, and unexplainable? Obviously, there is much to think and talk about. 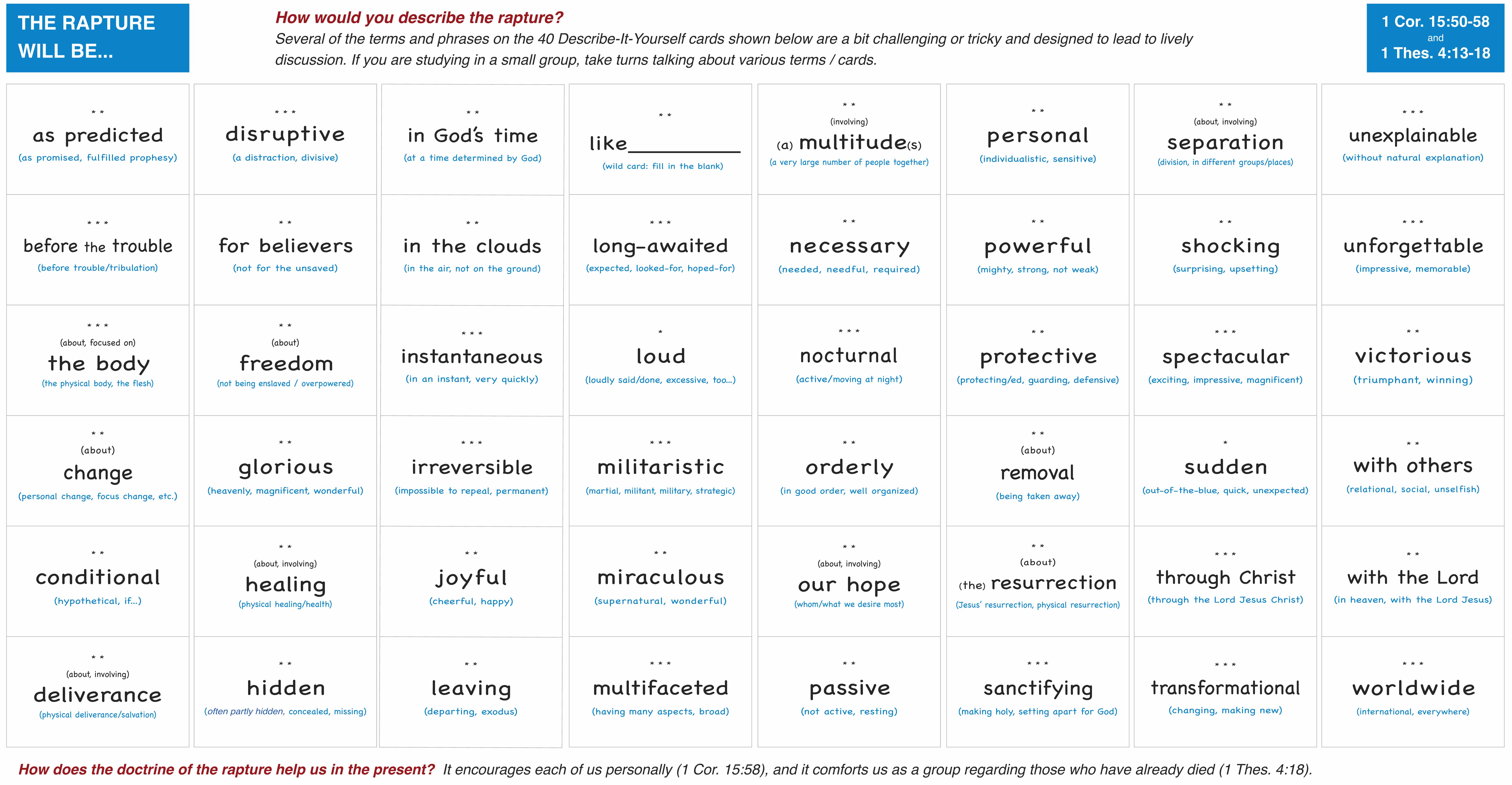 "Therefore, my beloved brethren, be stedfast, unmoveable, always abounding in the work of the Lord, because you know that your labor is not in vain in the Lord."

How would you describe this famous verse? There are many Describe-It-Yourself terms to choose from, including "wonderful" and "encouraging," but in this study we will limit the study to cards and terms that begin with the letter "C." After reading the verse and its context, think about how the terms on the cards below are appropriate. Which one is your favorite? 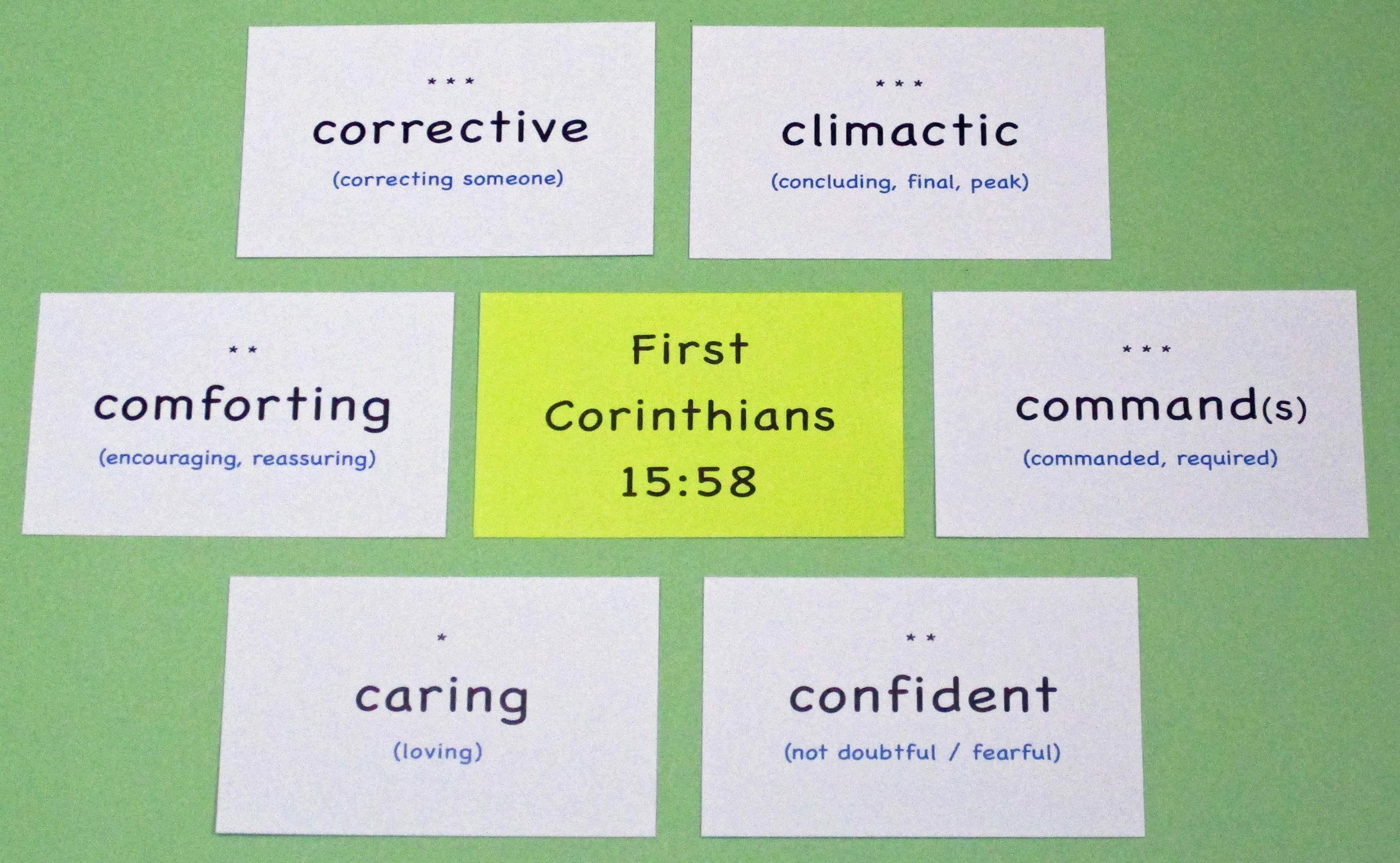 The verse is corrective because most Greeks did not believe in physical resurrection, and it is climactic because verse 58 comes at the end of chapter 15, Paul's great doctrinal defense of resurrection.

The verse contains commands, but it is comforting and encouraging because the Lord Jesus was victorious over death (15:57). Standing firm in the faith (15:58, 16:13) therefore is being confident of the gospel (15:3) and thereby joyfully abounding in the Lord's service. Love for other believers is involved in this. Notice how the verse begins and compare it with the commands in 16:13-14 which echo chapter 13.

If you use your own set of Describe-It-Yourself cards or scroll through the same as you think about this verse and others, you will be encouraged greatly.