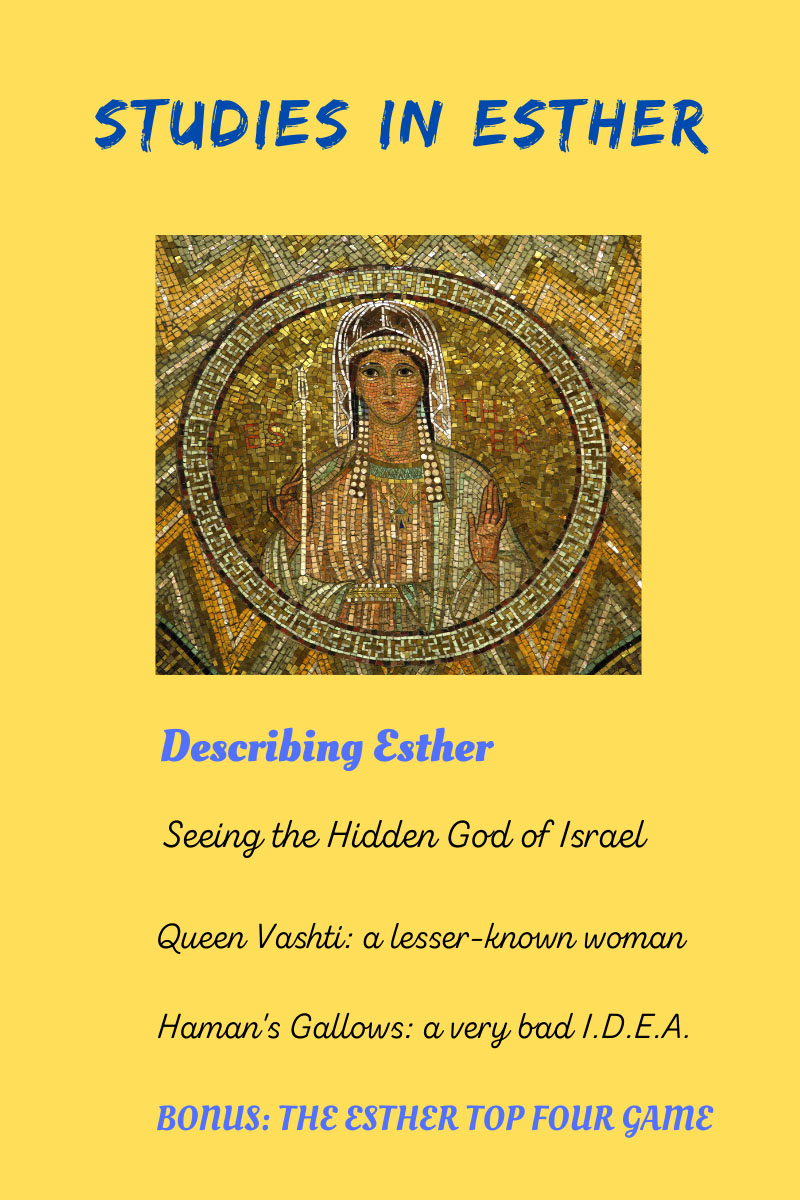 Check out these five ways to study Esther.

Surprisingly, there are four people in Esther on the Bible Top 55 list. The first is King Ahasuerus or Xerxes who is ranked #20. He far outranks Esther (#42), Mordecai (#46), her older cousin, and Haman (#54), the villain of the story. There is a one-page study on each of these in the Top 55 booklet.

THE ESTHER TOP FOUR GAME -- a simple and fun way to teach through Esther
Take the cards for Ahasuaerus, Esther, Mordecai, and Haman from the Top 55 deck or simply print out the cards below. Arrange these on the table or a white board to form a rectangle. Then do a short pregame interactive study of a few basic things about these four main characters in Esther. Do not spend too much time on this, however, because much will be learned during the game itself, much of which is open-Bible. 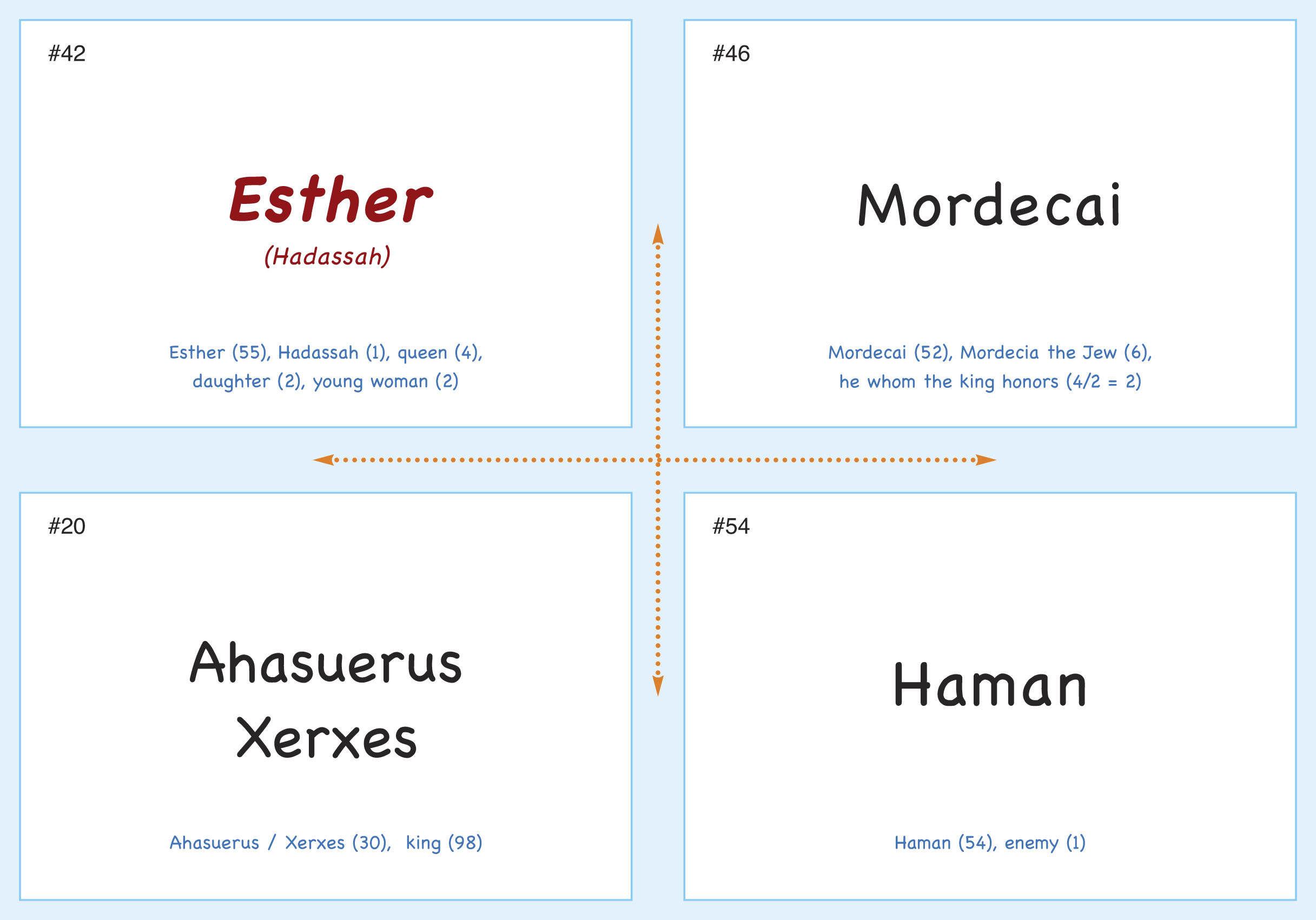 For instance, a player or team could earn two points by saying, "Moredecai was Esther's older cousin." They would only earn one points, however, for saying, "Esther was young and beautiful."

Compound sentences are not to be used to score two points. For instance, the sentence "Esther was young, but Mordecai was old." contains two names but it is only worth one point because it is a compound sentence with two parts which can not both be counted. On the other hand two points would be earned for saying, "Both Esther and Mordecai were godly."

At first it is easy to make sentences and score points, but a particular sentence can only be used once. (The leader should keep a record of what is said.) As the game progresses, it becomes difficult to think of something new to say. So as it begin to slow down, the leader should allow all players to use their Bibles. A timer should also be used, however, to keep the game from becoming too slow.

Near the end of the game, players or teams are to be given between five and ten minutes to use their Bibles and write out on paper as many NEW lines about people in the Top Four as possible. This special, game-ending round is where much of the differences in scoring will occur.

TEACHING DURING THE GAME
During the game, especially the open-Bible portion, the leader should ask participants to back up their sentences. For instance, if someone says, "Both Esther and Mordecai were godly." the leader should ask for evidence, in which case reading the verses on fasting (4:15-16) would be appropriate.

The leader should also be prepared to expand upon various points that are made. For instance, he or she might point out that fasting is directly mentioned in Esther but prayer is not. Probably this is because, mentioning prayer would have been too close to directly mentioning God. Undoubtedly they prayed as they fasted, but it does not directly say so.

THE WORKSHEET
below is to be used to describe Esther. Some blank lines have been filled to help begin the study. So the study leader should go through these with the group before dealing with the blank lines. Suggested answers are listed at the bottom of the worksheet, but those in the group should discuss other possible answers as well. 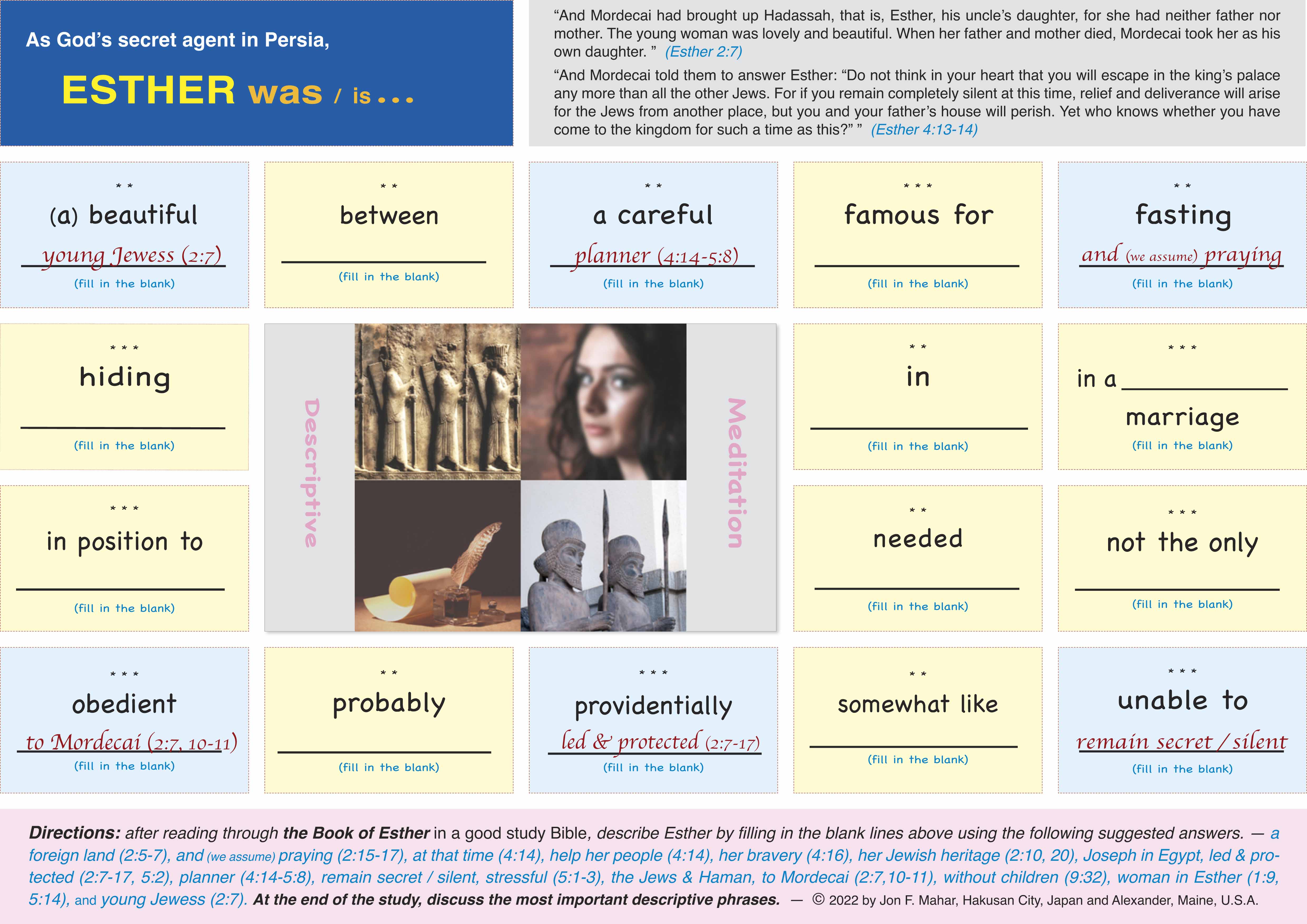 GOD'S LEADING
Thanks to the providential leading and protection of God, Queen Esther was in a special position to help her people. Before the crisis brought on by Haman arose, she probably did not understand why the Lord had led her to marry the Persian king (4:14). God had a special purpose which became clear in time. Undoubtedly, Mordecai had wondered about God's purpose as well.

GOD'S AGENT
Since Esther's Jewish ancestry had been kept secret (2:20), the beautiful, young Jewess was God's secret agent within the Persian king's inner circle. Her ethnic origin and relationship with Mordecai was kept from Haman until it was too late for him (7:5-6). Like a skillful agent, Esther planned and acted carefully (4:15-5:8) rather than hastily, and this obviously involved prayer since fasting is prominently mentioned (4:15-17).

GOD'S POWER
Esther, in the Book which bares her name, was somewhat like Joseph in the closing chapters of Genesis. Both Joseph and Esther were used of the Lord to save the Jewish people. In both cases, however, it was mainly God himself who worked in a special way.
The clearest indication that it was God working in all this is in chapter six. The king was unable to sleep and read about Mordecai's earlier good deed (6:1-3). This insomnia and reading was perfectly timed, just like the royal butler in Egypt remembering Joseph in Genesis 41:9-14. God's led in both cases in and through Gentiles.

GODLY MARRIAGE
How would you describe the marriage of Esther and the king of Persia? For sure, it was stressful and unusual, but was it godly? Esther was a godly woman, but the king was not, especially at first. So it was a mixed marriage between a believer and an unbeliever, even though it was God himself who brought them together.
Does this show that it is ok for a believer to marry an unbeliever? Certainly not! This was obviously a special case. Moreover, it does not seem that Esther's personal will was involved initially since she probably had no voice in the matter (2:17). Over time, the marriage seemed to change somewhat, as trust grew. Thus, it was a growing relationship. Discussing the nature of their unusual marriage is a helpful practical way to study Esther!

The Lord is never directly mentioned in Esther. So in a way it is a godless book, and the title of this study is God's People in Godless Times. As in other studies in this series on passages in which God is never or rarely mentioned, the main point is that the Lord is active even when he seems to be missing. -- So for us, Esther is a call to live by faith (Heb. 11:1-2), expecting to see God work in the little things as well as in the big things of human history which is centered on the Jewish people and the Messiah (John 4:22).

The idea of building a gallows or execution tower to hang Mordecai was Hanan's wife's idea, and as she hoped, it changed his somber mood (Est. 5:14). In the end, however, the tower was used to hang Haman. So it was a very bad idea for him, but the outcome was fitting. Zeresh was Haman's counselor, and this is one of several studies on good and bad ideas in the Bible which demonstrate four simple steps to use in order to see if an idea is good or bad.

This study on Vashti, the queen whom Esther replaced, is featured in the Lesser-Known but Significant Women series. The main point in the study is that God was in charge of all that happened. It is similar to the study in Esther in the Godless-Times series, but that study (#2 above) makes it more clear that God was not responsible for the various evil things that the king did.