The Four Gospels without Getting Lost

The summary charts of the four Gospels below are unique in three ways. The first big difference from those in other guides to the Gospels is that you can see it ALL ON ONE TO-SCALE PAGE. The second and third big differences are that NUMERICAL DATA and COLOR CODING are included so that you can quickly see exactly where in the Gospels Jesus spoke more, where he performed more miracles, where women are mentioned most, etc.

These first charts are focused on the LENGTH of each Gospel as a whole, by section, and by chapter. Like the various other charts below, they are designed to help compare the the four Gospels in various ways.

Although Luke is longer than Matthew as a whole, the portion from Jesus' entry into Jerusalem onward to the end is considerably shorter in Luke than the parallel portion in Matthew. Why? The main reason is because there is much more teaching about the end times in Matthew than in Luke. (Compare Matthew chapters 24 and 25 with Luke chapter 21.) 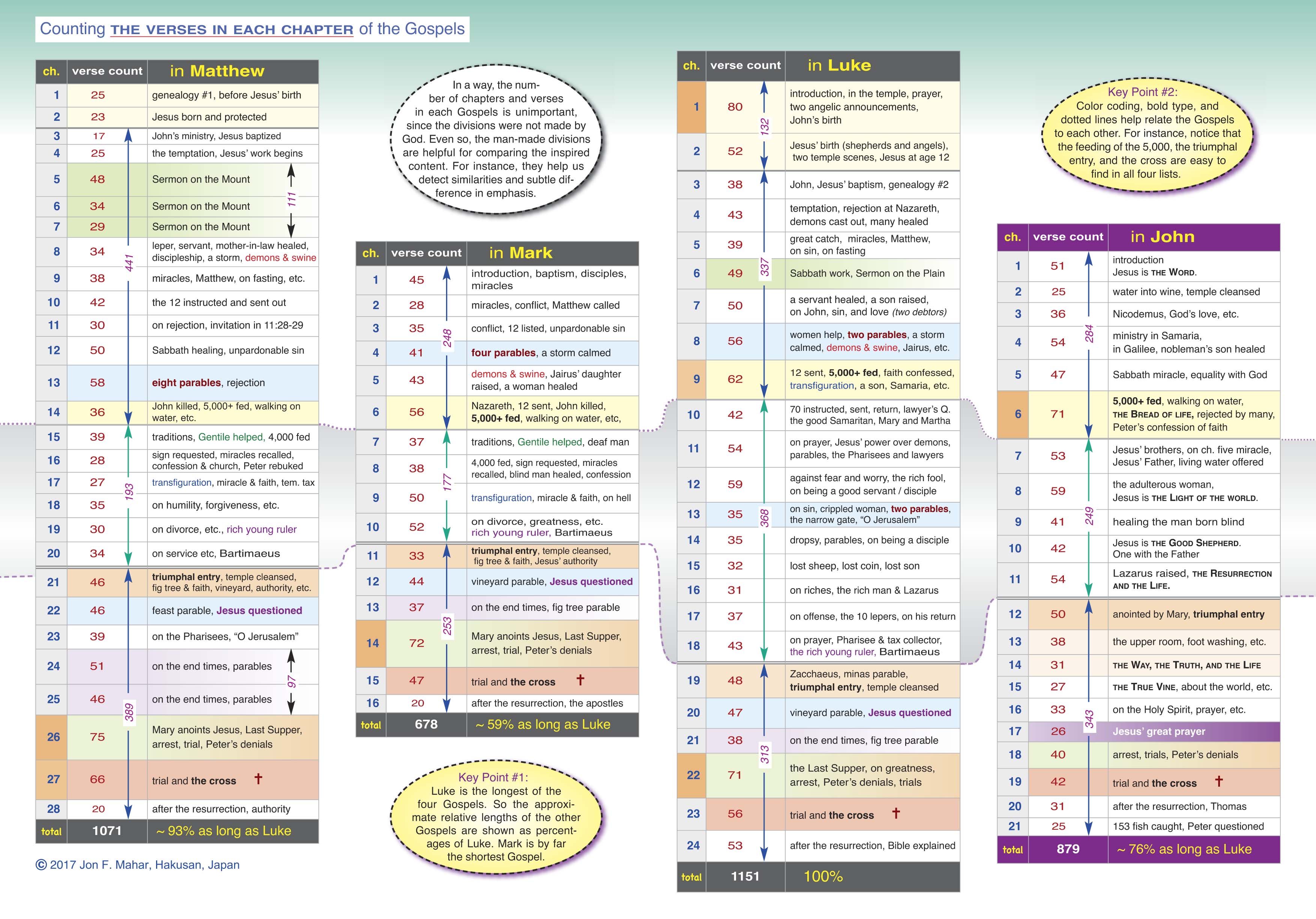 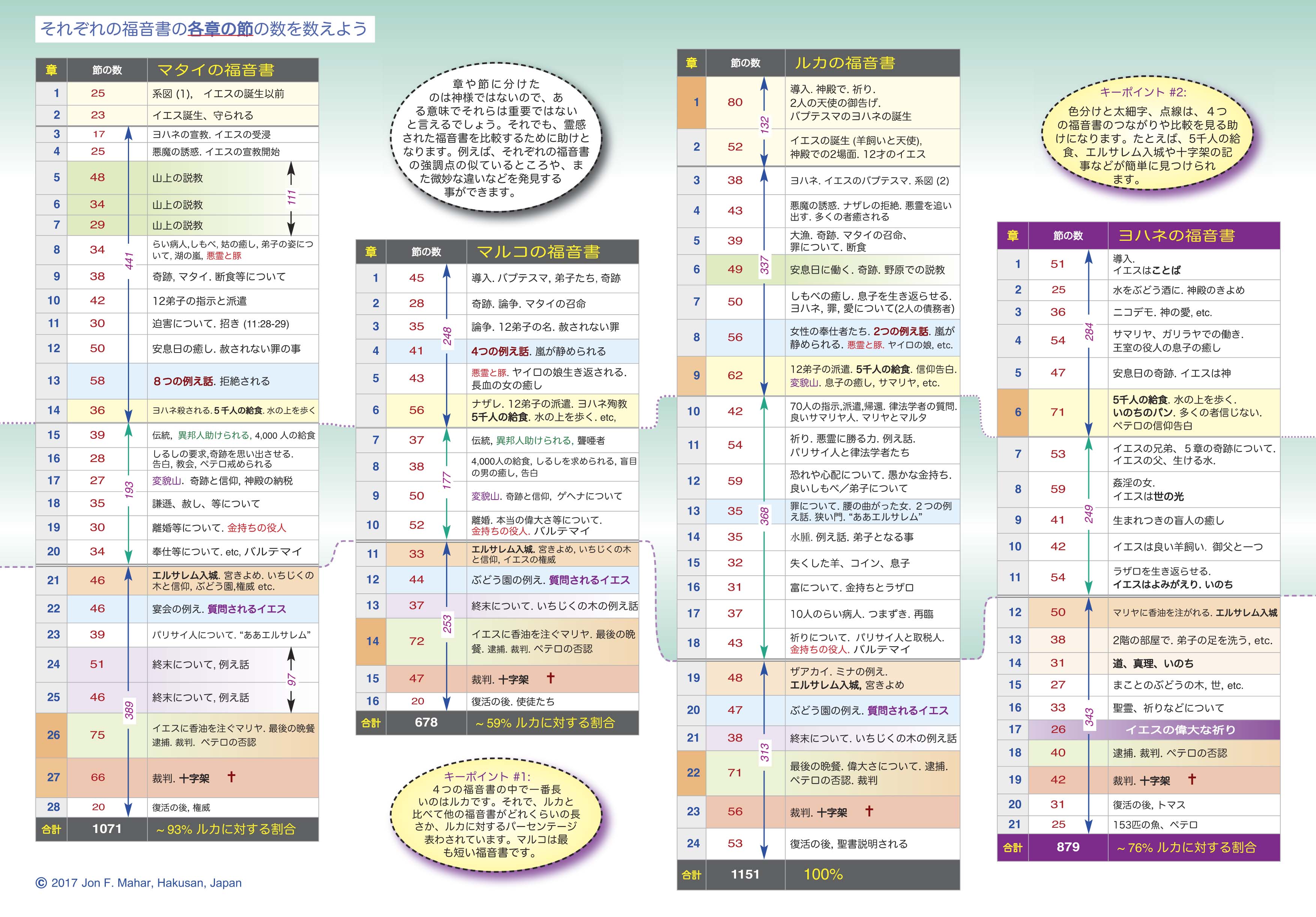 These charts are focused on JESUS' SPEAKING.
For instance, notice that the percentage of verses with Jesus speaking is much higher in Matthew than in Mark. 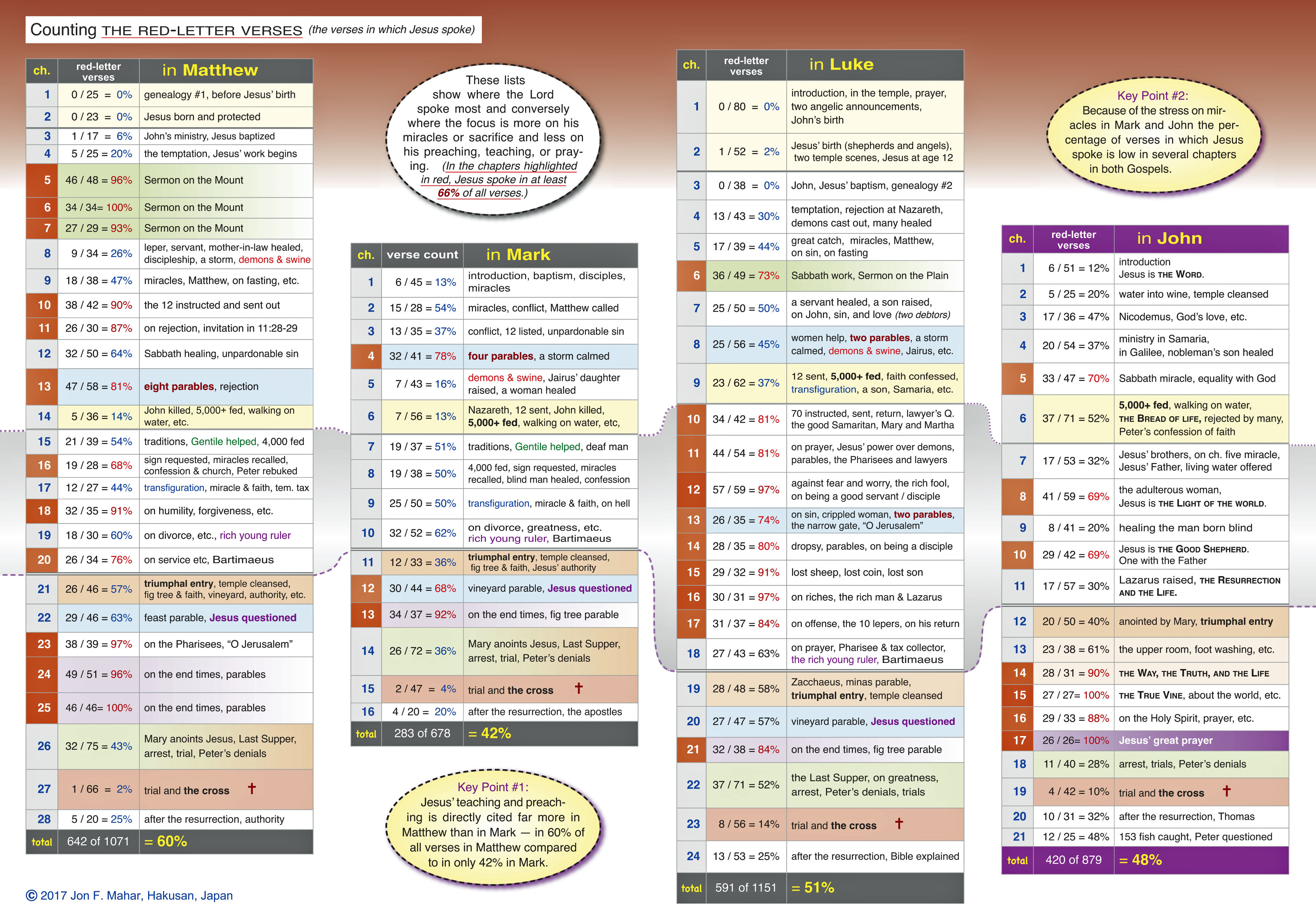 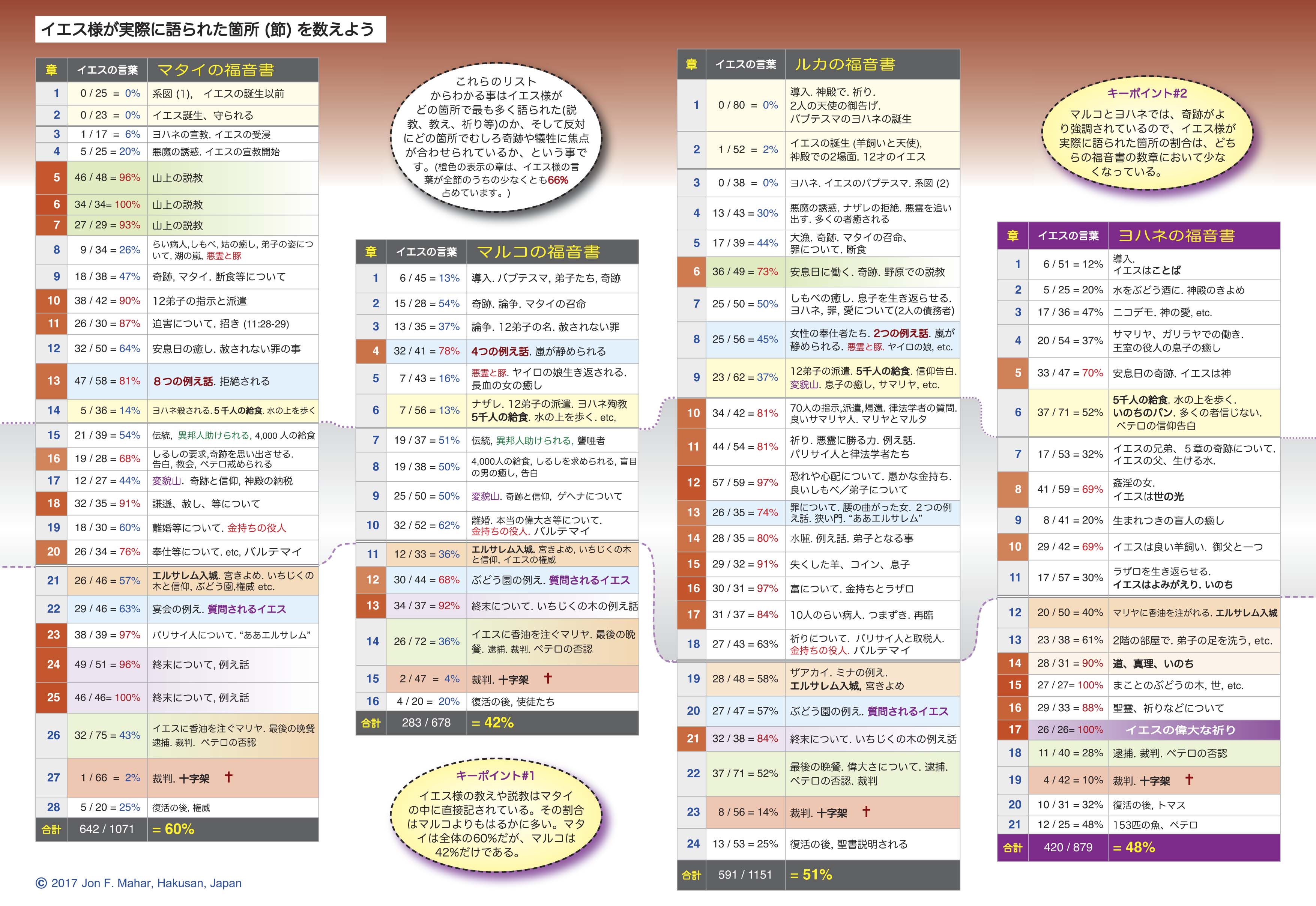 These charts are focused on JESUS' MIRACLES.
For instance, notice that the percentage of verses concerning miracles is much higher in Mark than in Matthew. 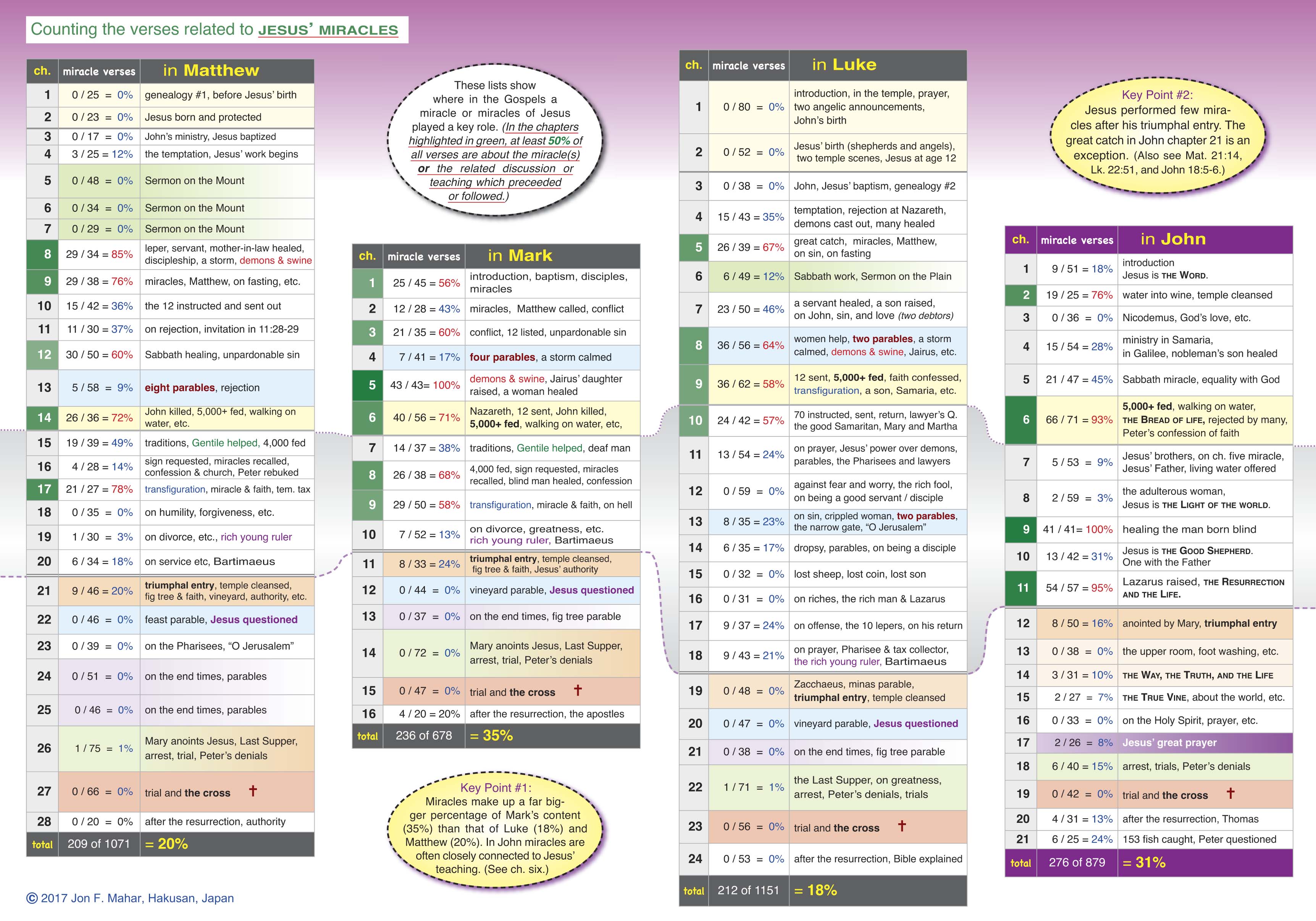 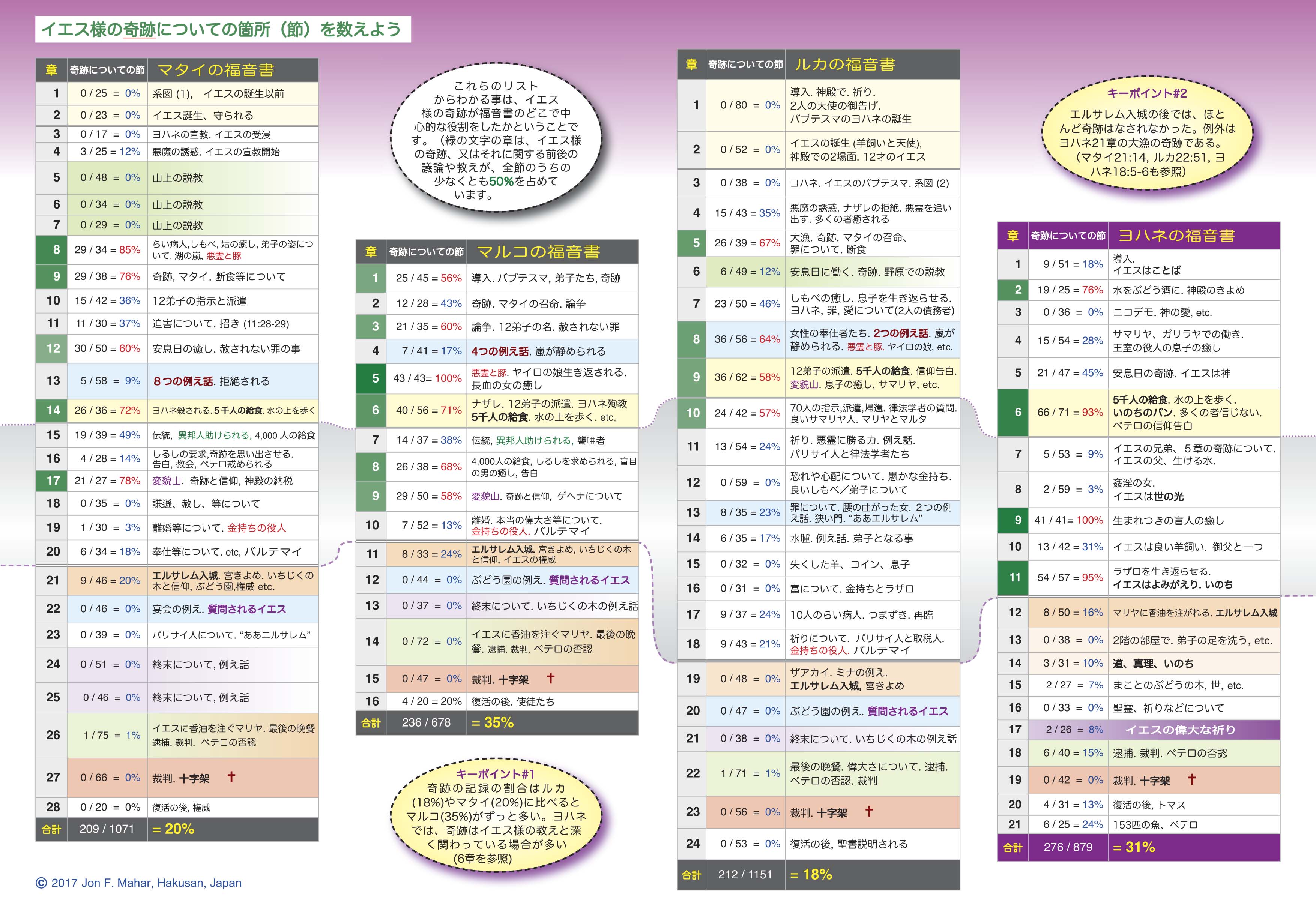 These charts are focused on WOMEN in the Gospels.
For instance, although Luke is well known for passages with women, the percentage of such in Luke is only slightly higher than in Mark who is not nearly as famous for such. The lowest percentage of verses concerning women is in John. 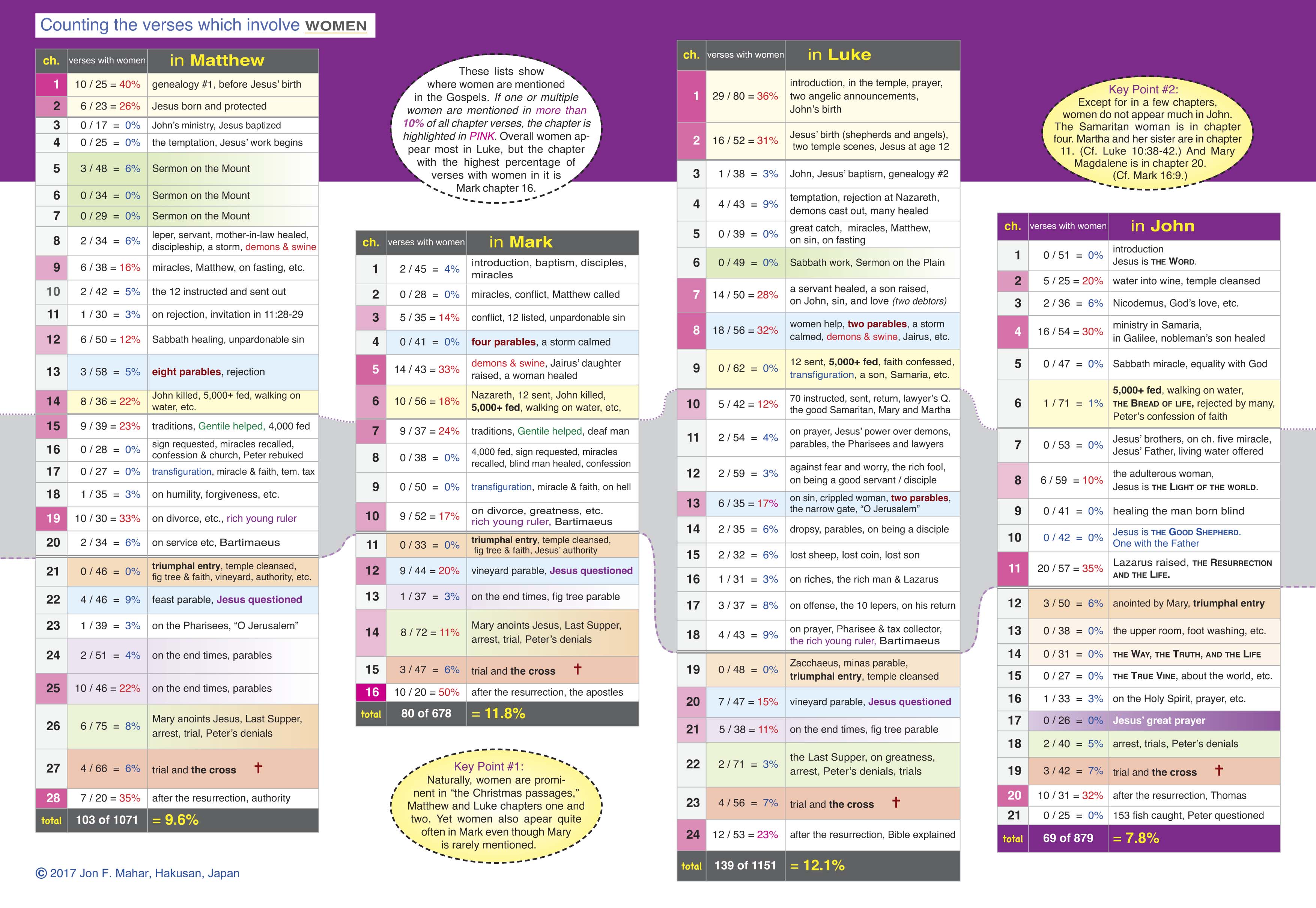 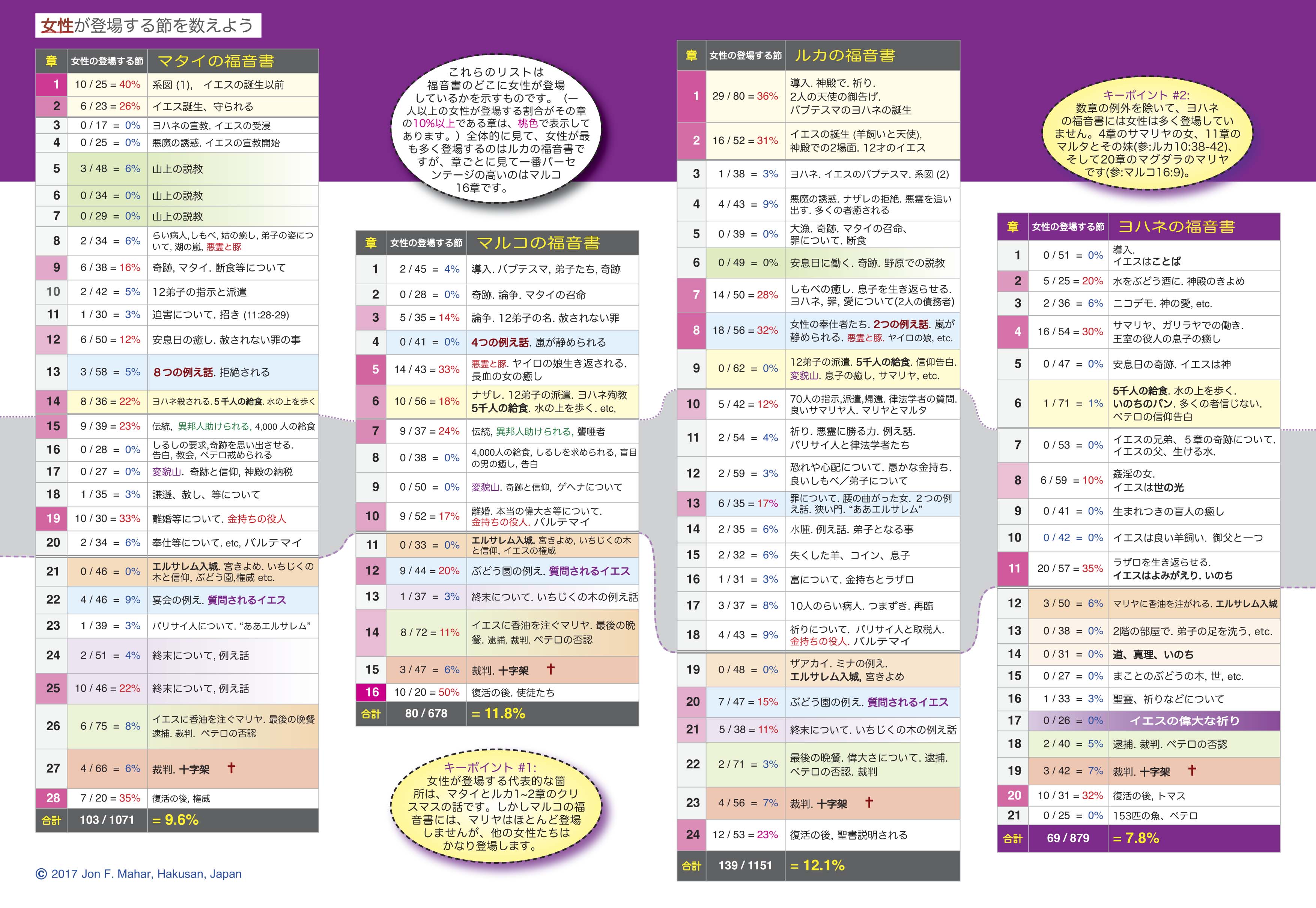 These charts are focused on BELIEF and UNBELIEF in the Gospels.
Compared to the others, John is well known for focusing on belief, but he also stressed unbelief. One of John's main purposes was to show why "the Jews" did not believe in Jesus. Moreover, belief and unbelief are also stressed here and there in the other Gospels, including in Matthew chapter nine, Mark chapter 11, and Mark chapter 16. 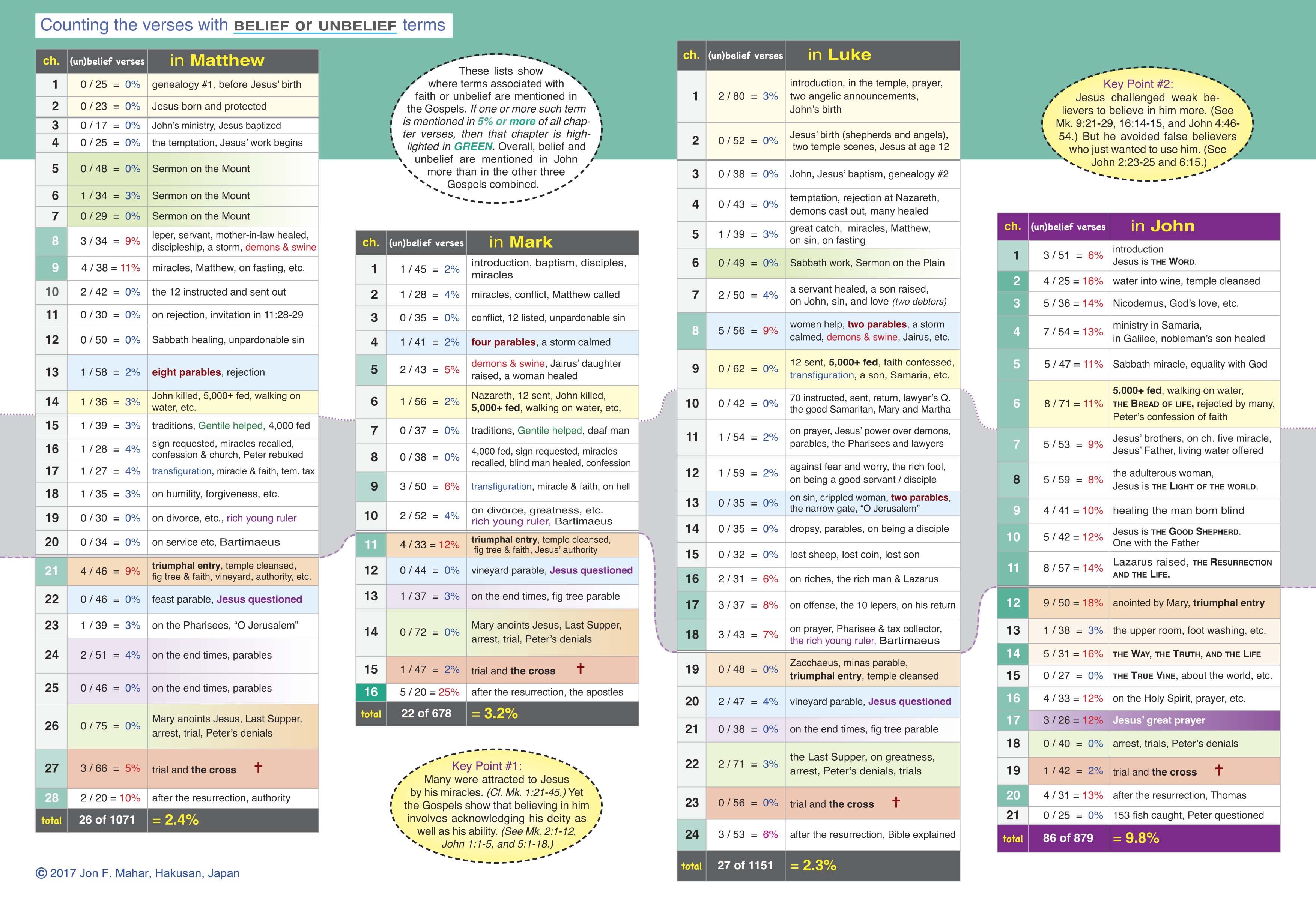 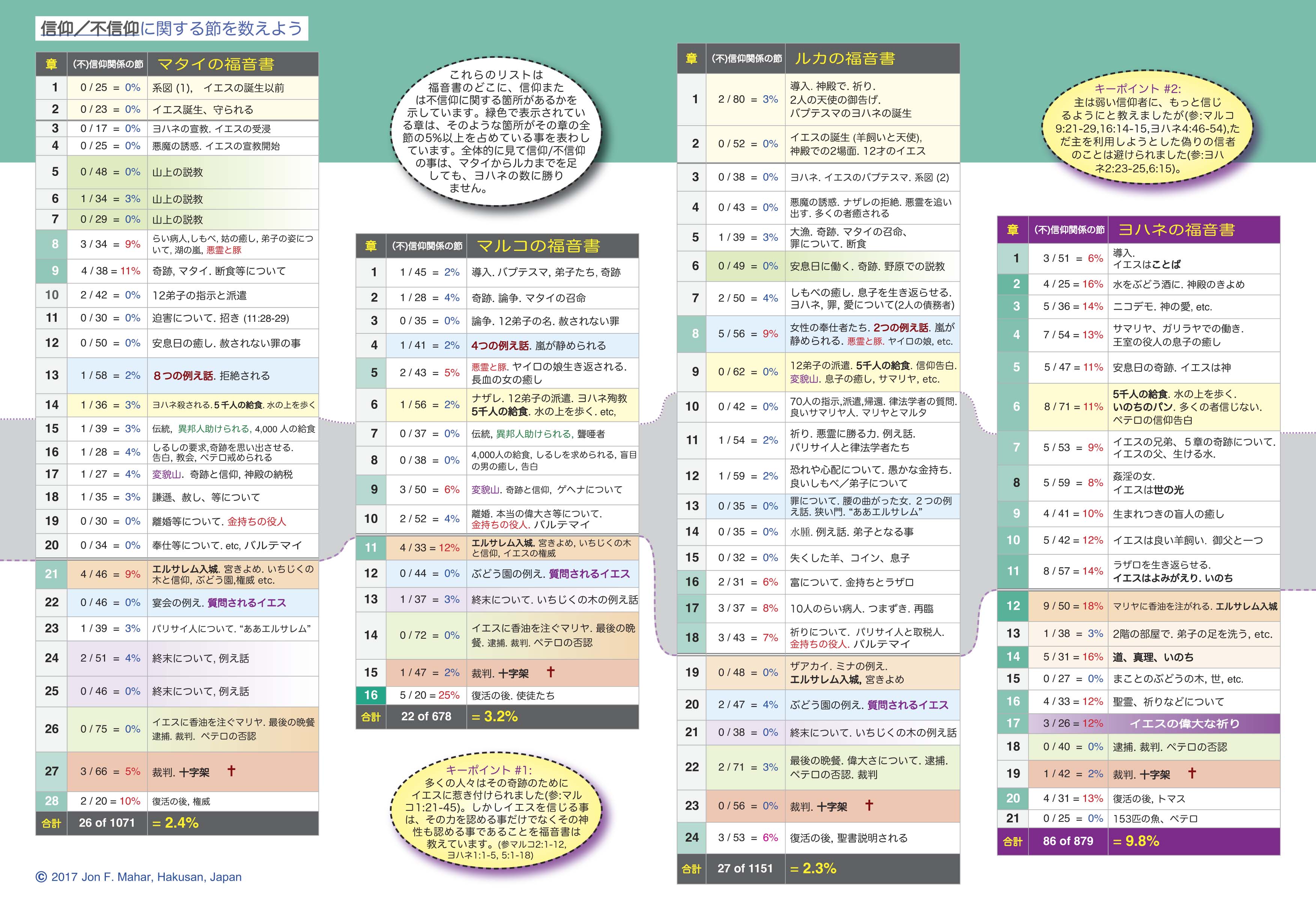 These charts are focused on QUESTIONS and QUESTIONING in the Gospels.
Although many questions were asked in all four, the overall frequency is somewhat higher in John. In chapters seven and nine, this reflects the intense debate about Jesus among the Jews. In the final chapter, the questioning was mostly during personal interaction between the risen Lord and Peter. In contrast to this, there was little or no questioning in the final chapters of Matthew and Mark. 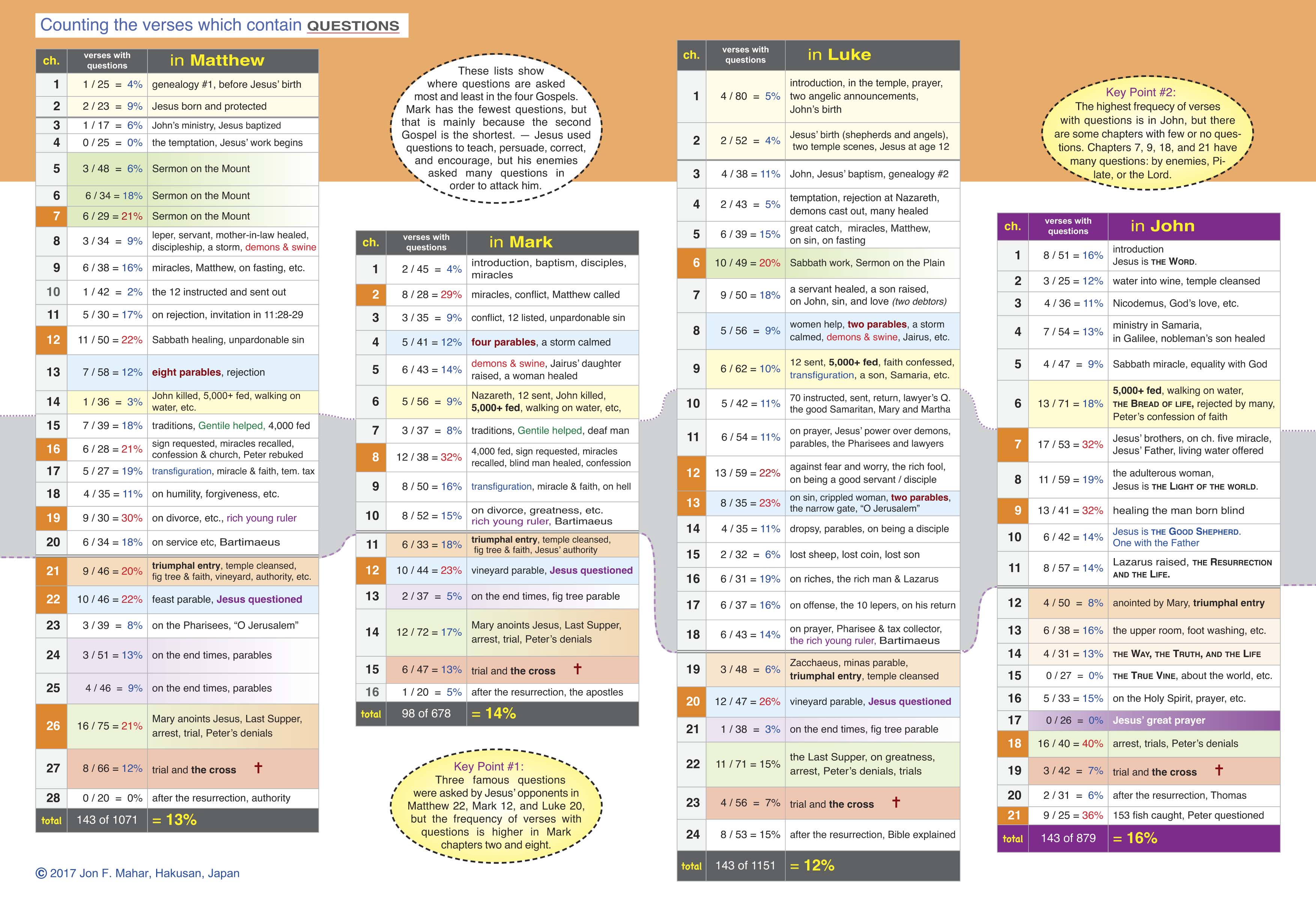 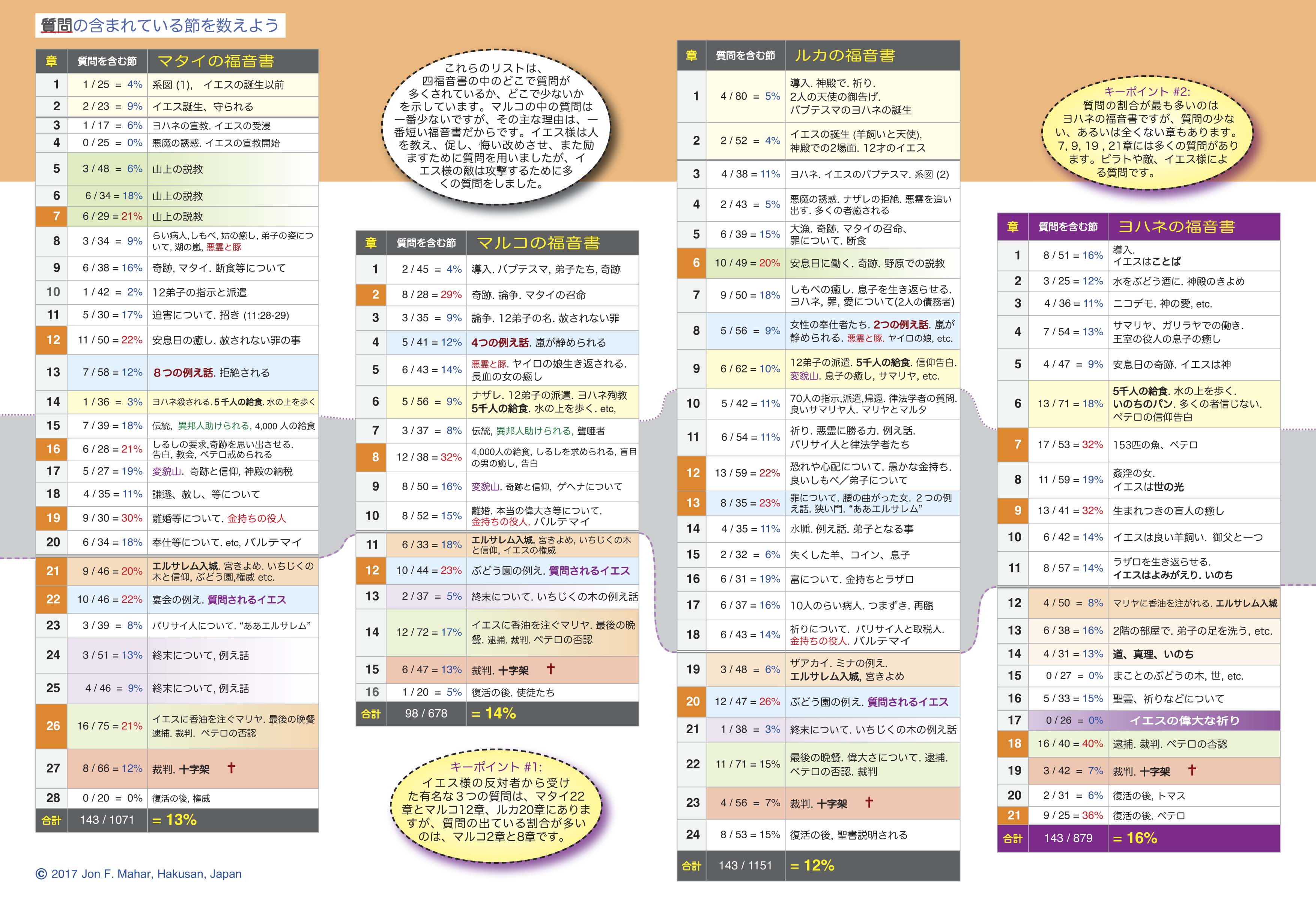 These charts are focused on JESUS' AUTHORITY OVER EVIL SPIRTS as seen in the Gospels.
There is much about this in Mark's Gospel since Jesus' greatness and power are important themes in Mark, but evil spirits or demons are hardly mentioned at all in John. Why not? Perhaps it is because such would distract from the deity of Jesus theme in John. For instance, when Jesus walked on the lake in John chapter six, John does not mention that the disciples at first thought that they were seeing a ghost. 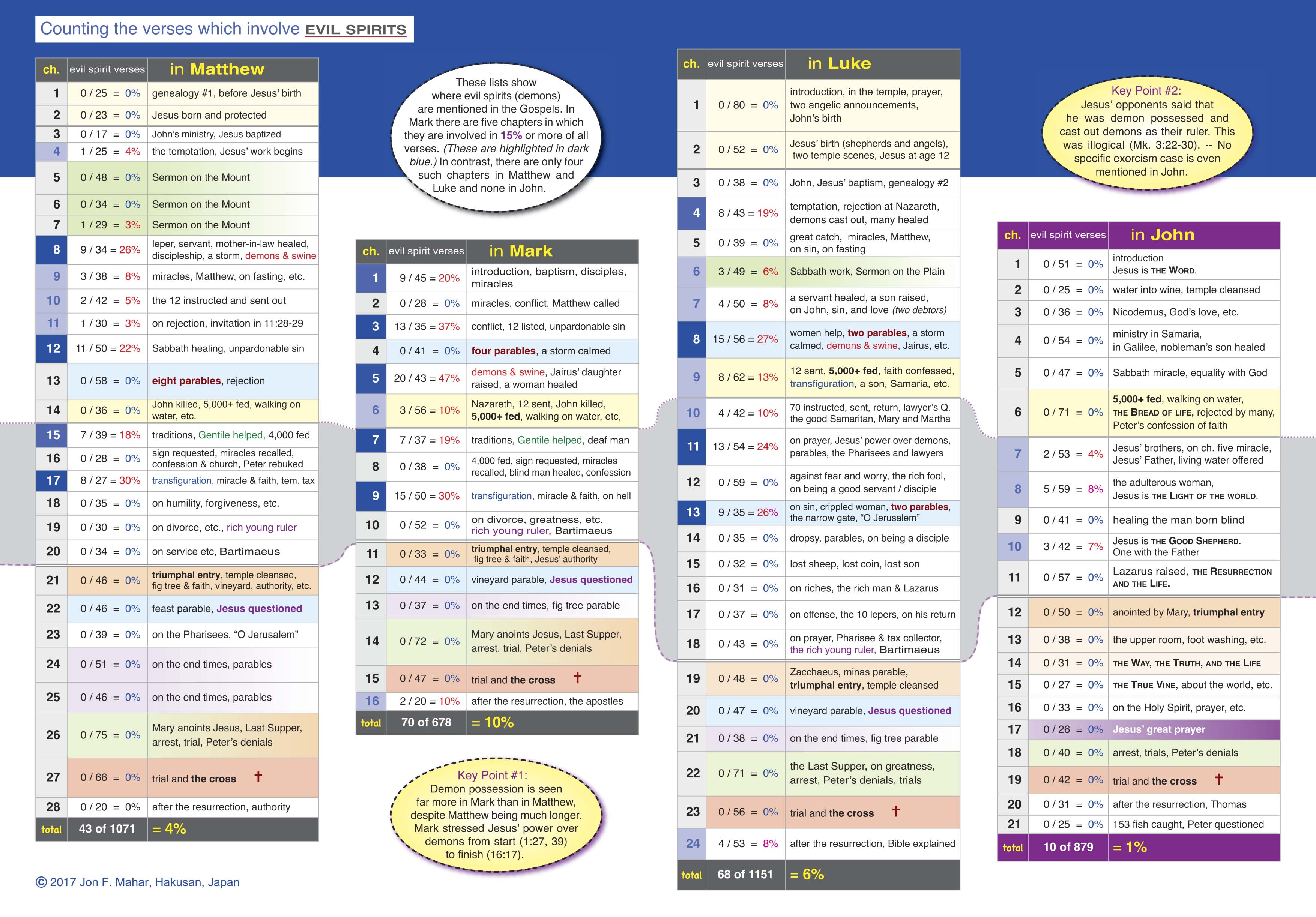 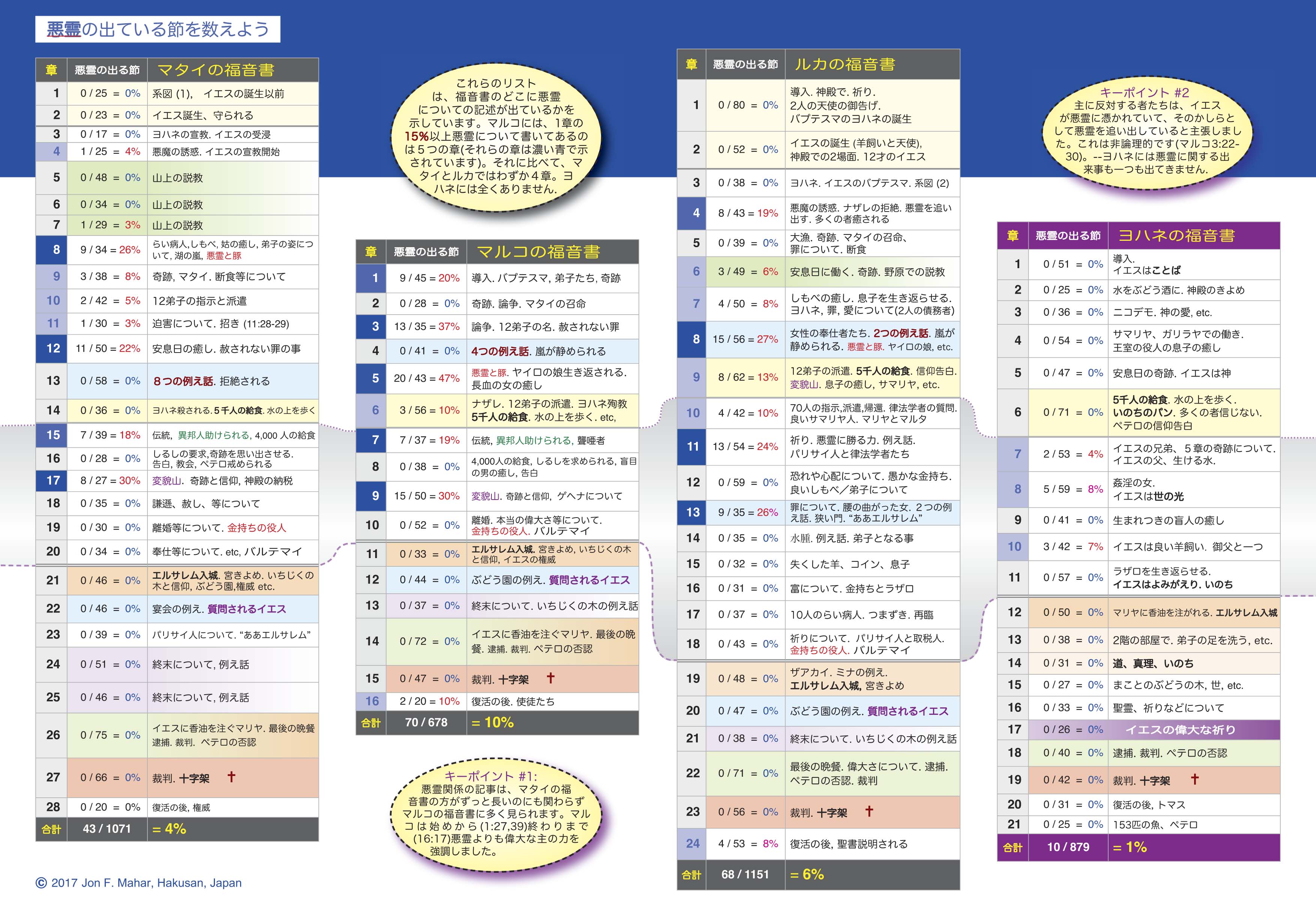 The seven sets of worksheets below are to be used for studies with the corresponding seven summary charts of the four Gospels above.

These first worksheets are to be used for studies concerning THE FOUR GOSPELS IN GENERAL, along with summary chart #1 above which is focused on length. They may be used for an introductory study and / or for a concluding one. 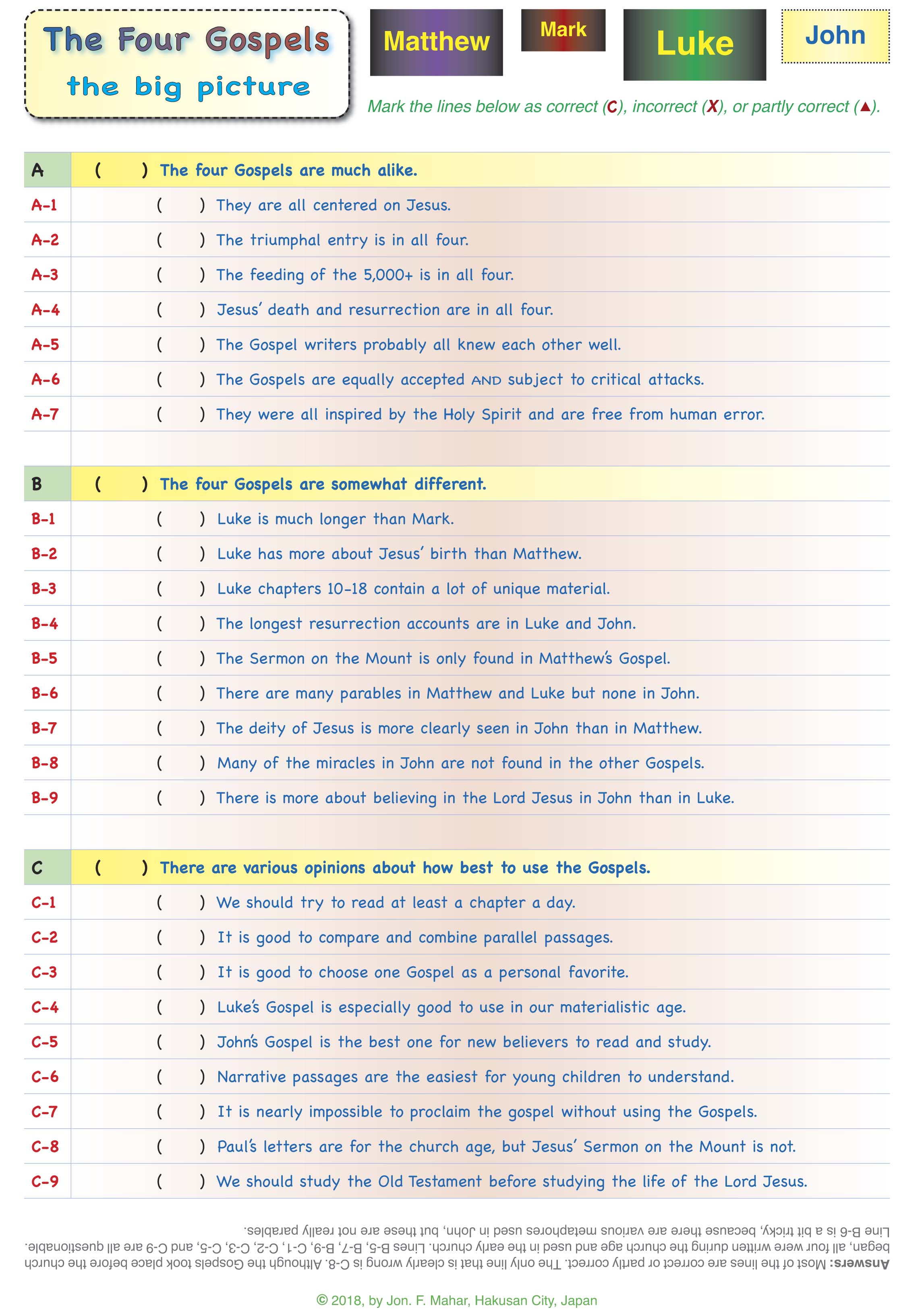 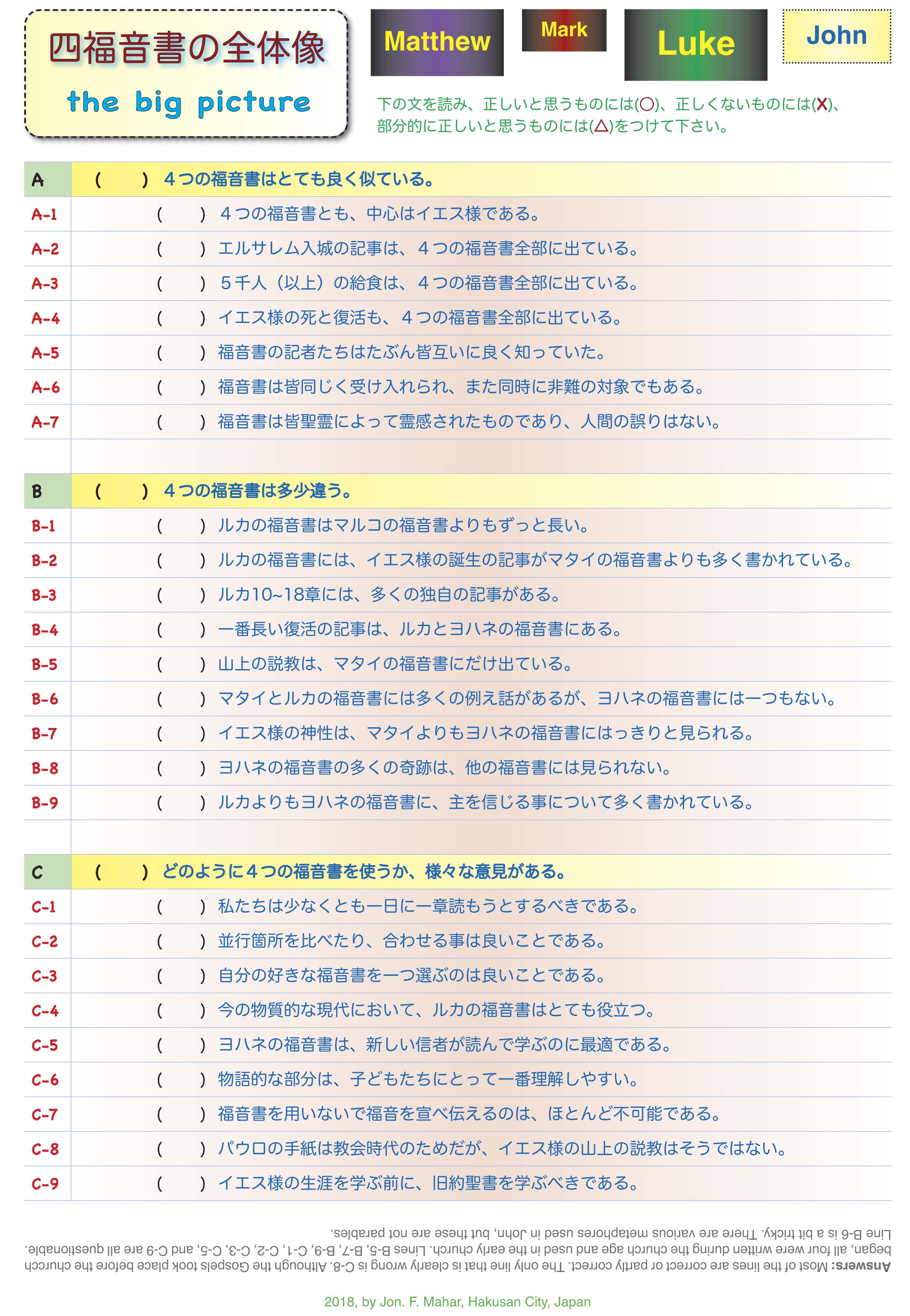 These worksheets are to be used for studies concerning JESUS' SPEAKING and PREACHING, along with summary chart #2 above which has the same focus. 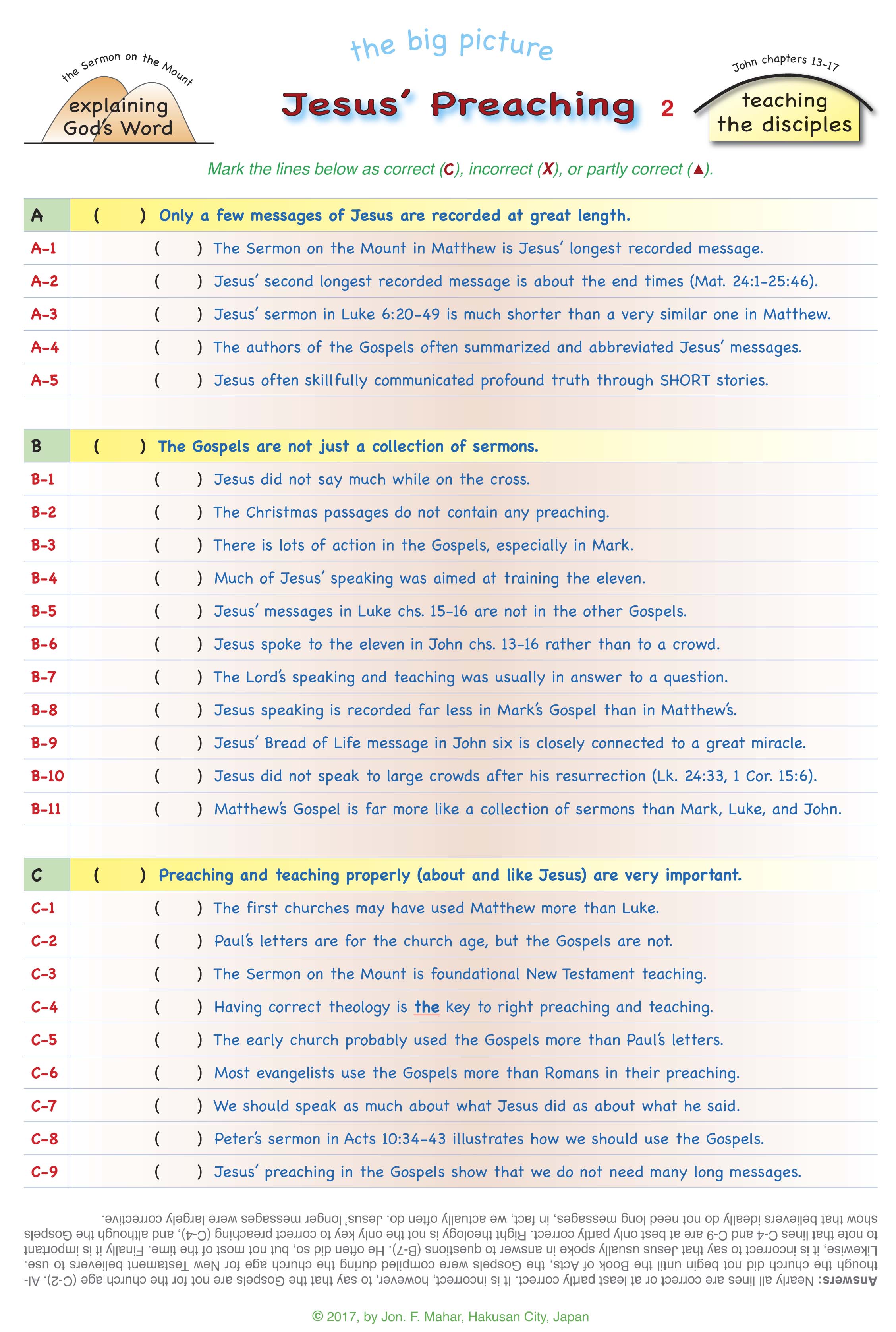 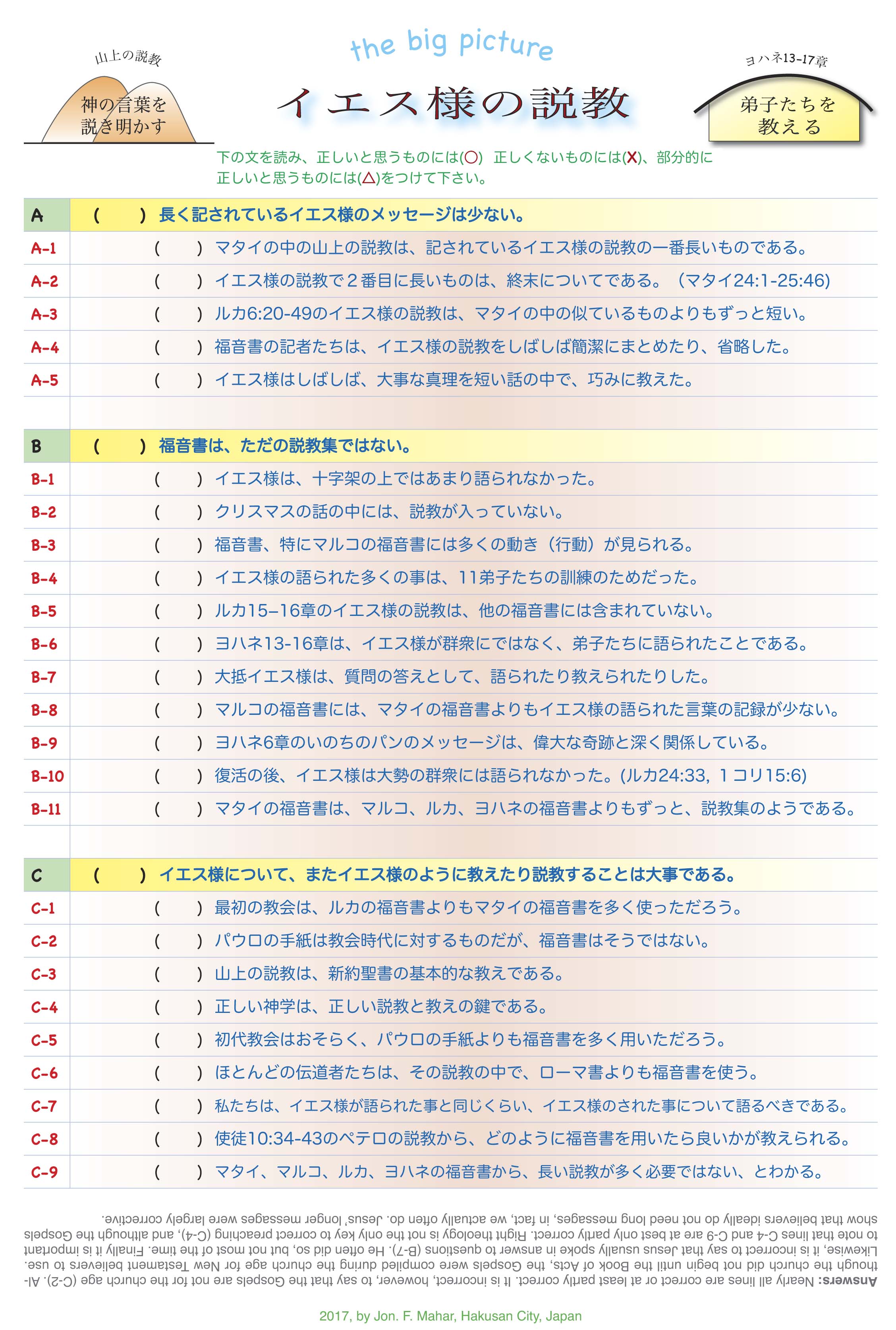 These worksheets are to be used for studies concerning JESUS' MIRACLES, along with summary chart #3 above which has the same focus. 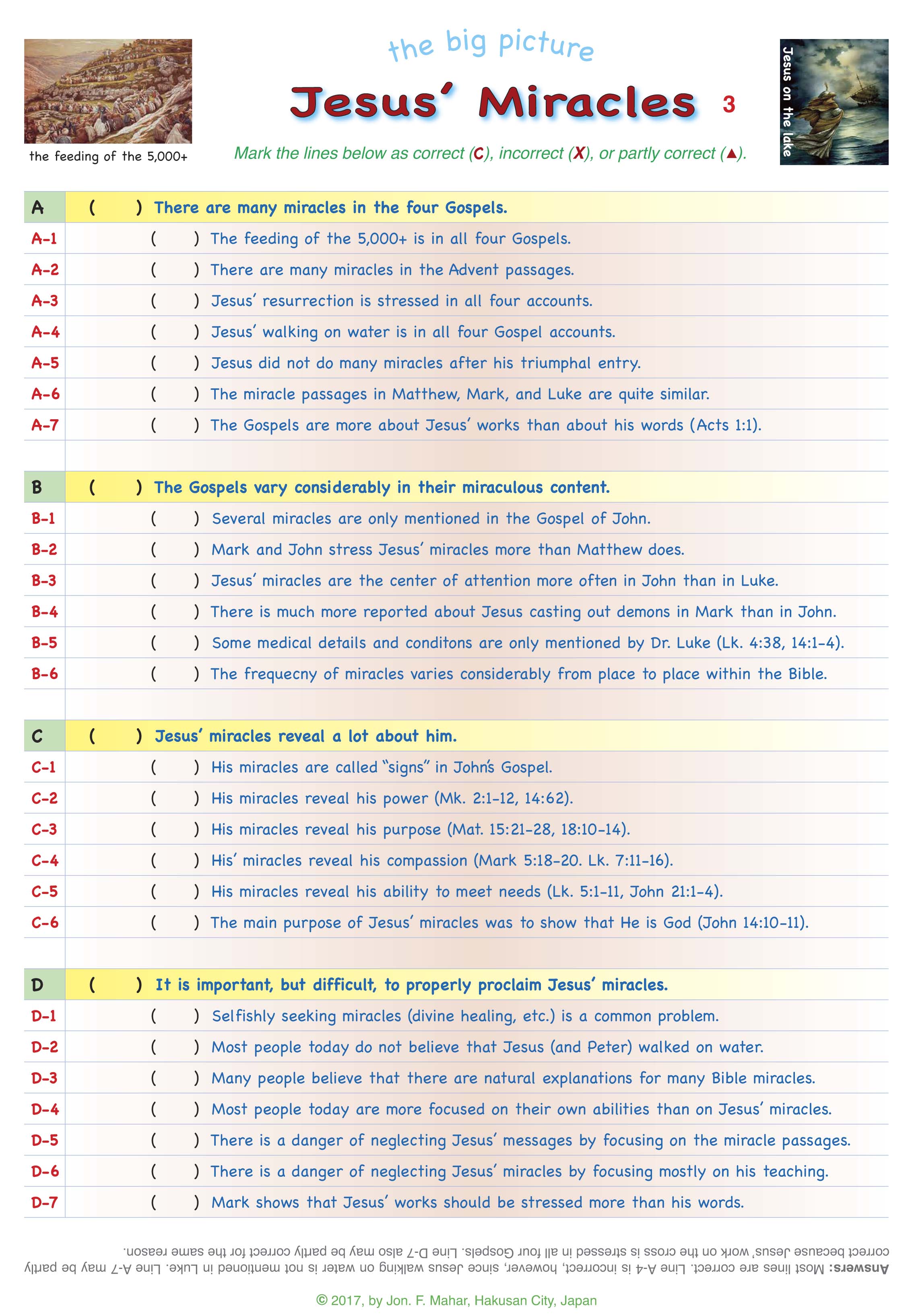 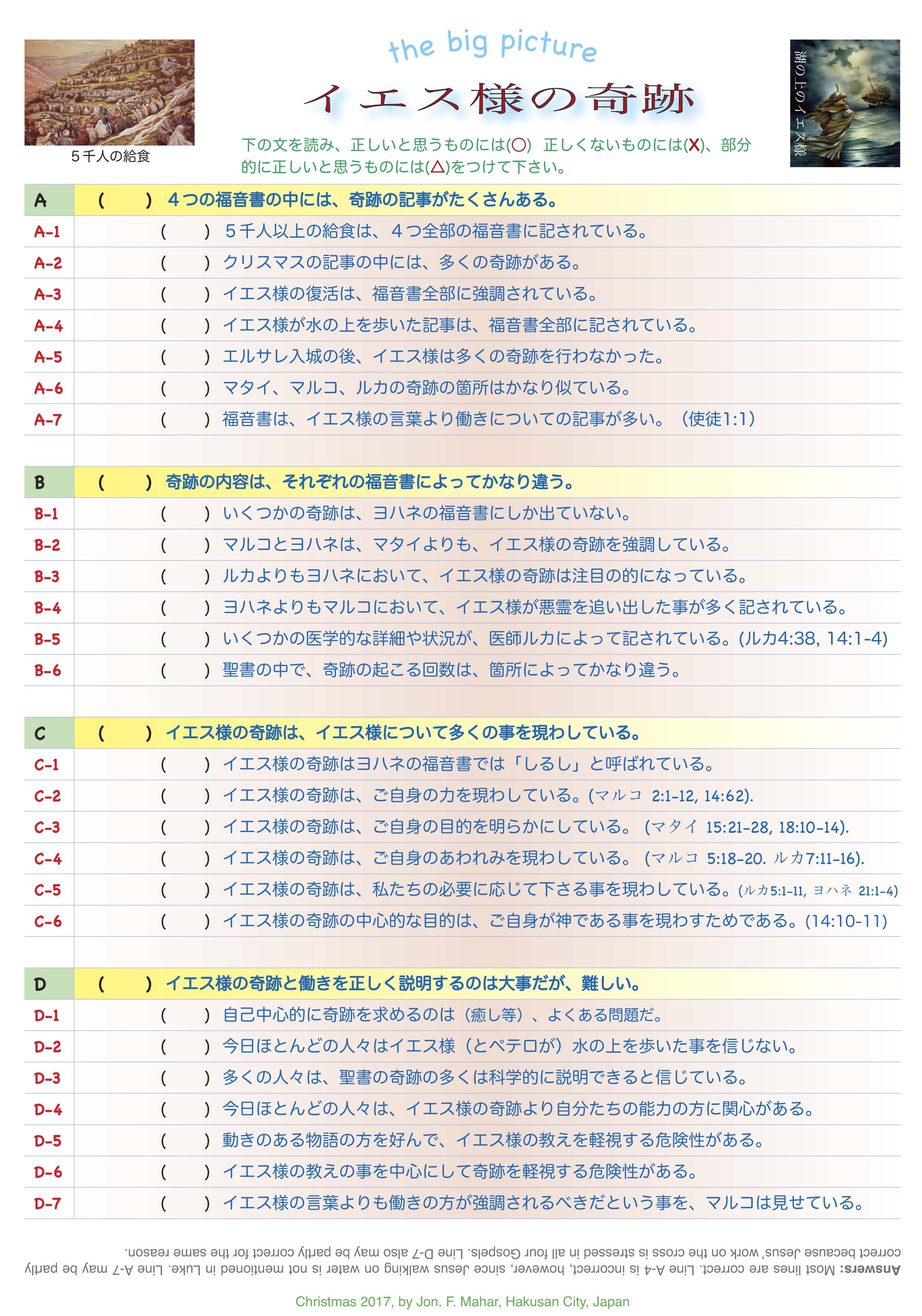 These worksheets are to be used in studies concerning WOMEN IN THE GOSPELS, along with summary chart #4 above which has the same focus. 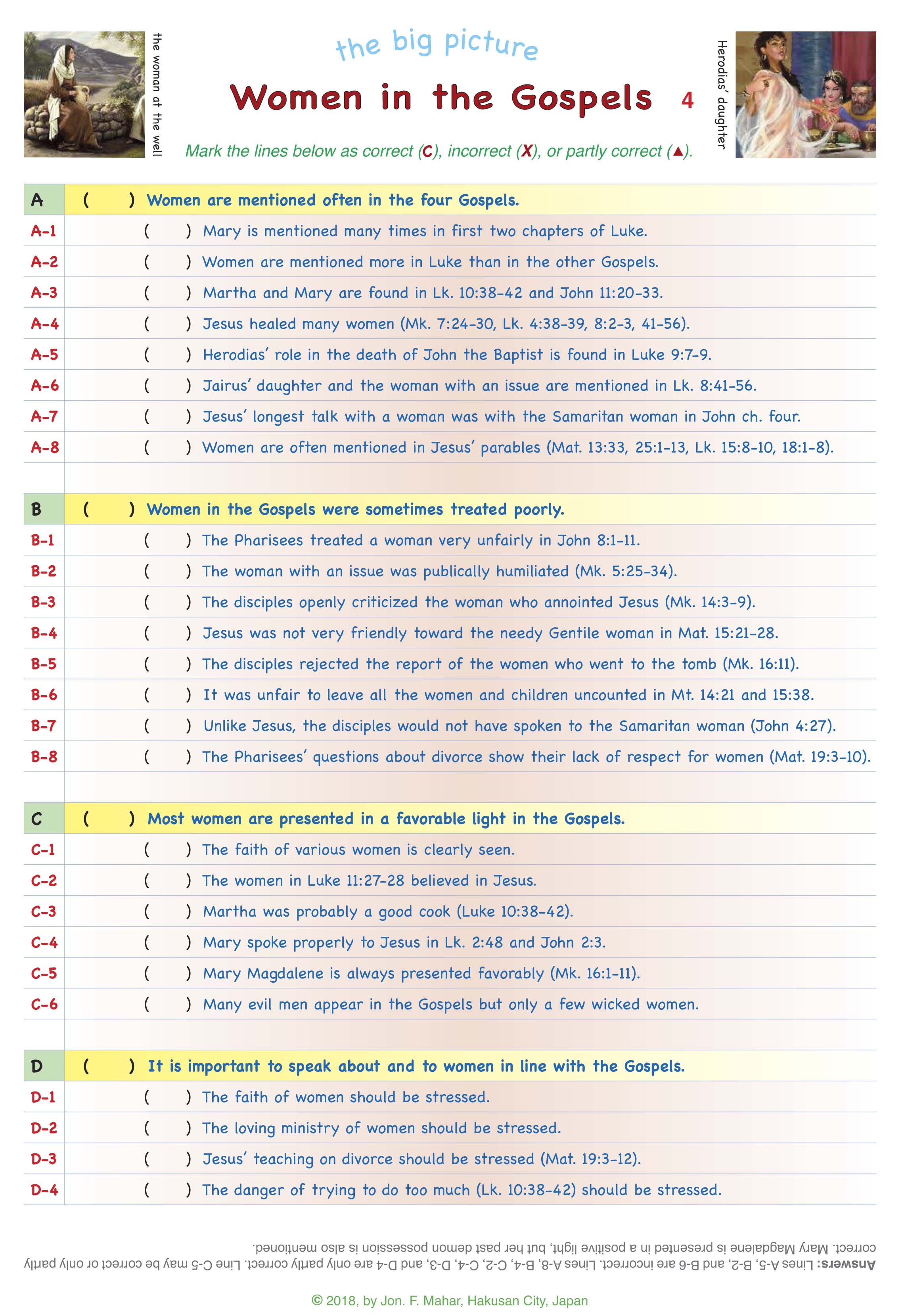 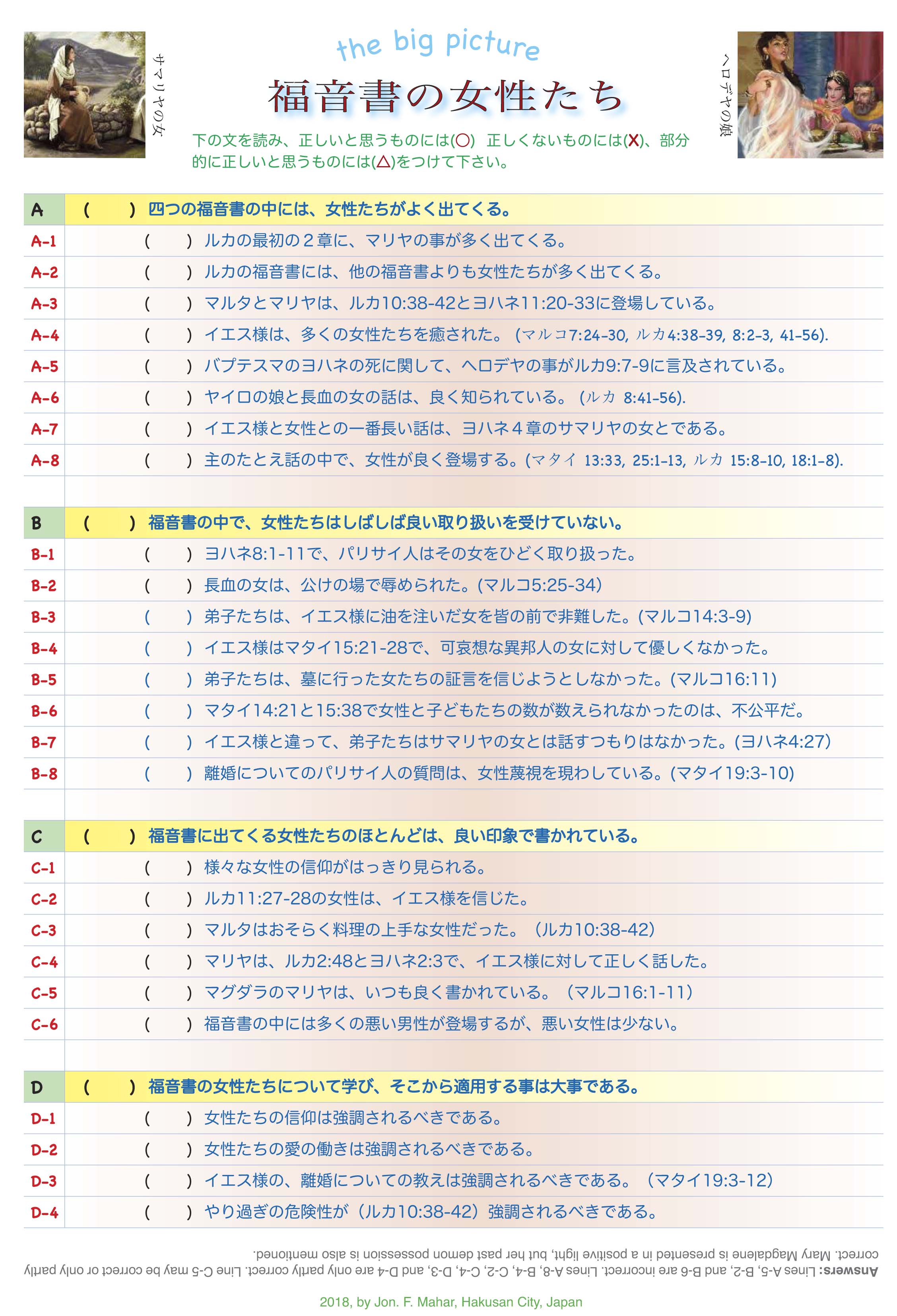 These worksheets are to be used in studies concerning BELIEF and UNBELIEF in the Gospels, along with summary chart #5 above which has the same focus. 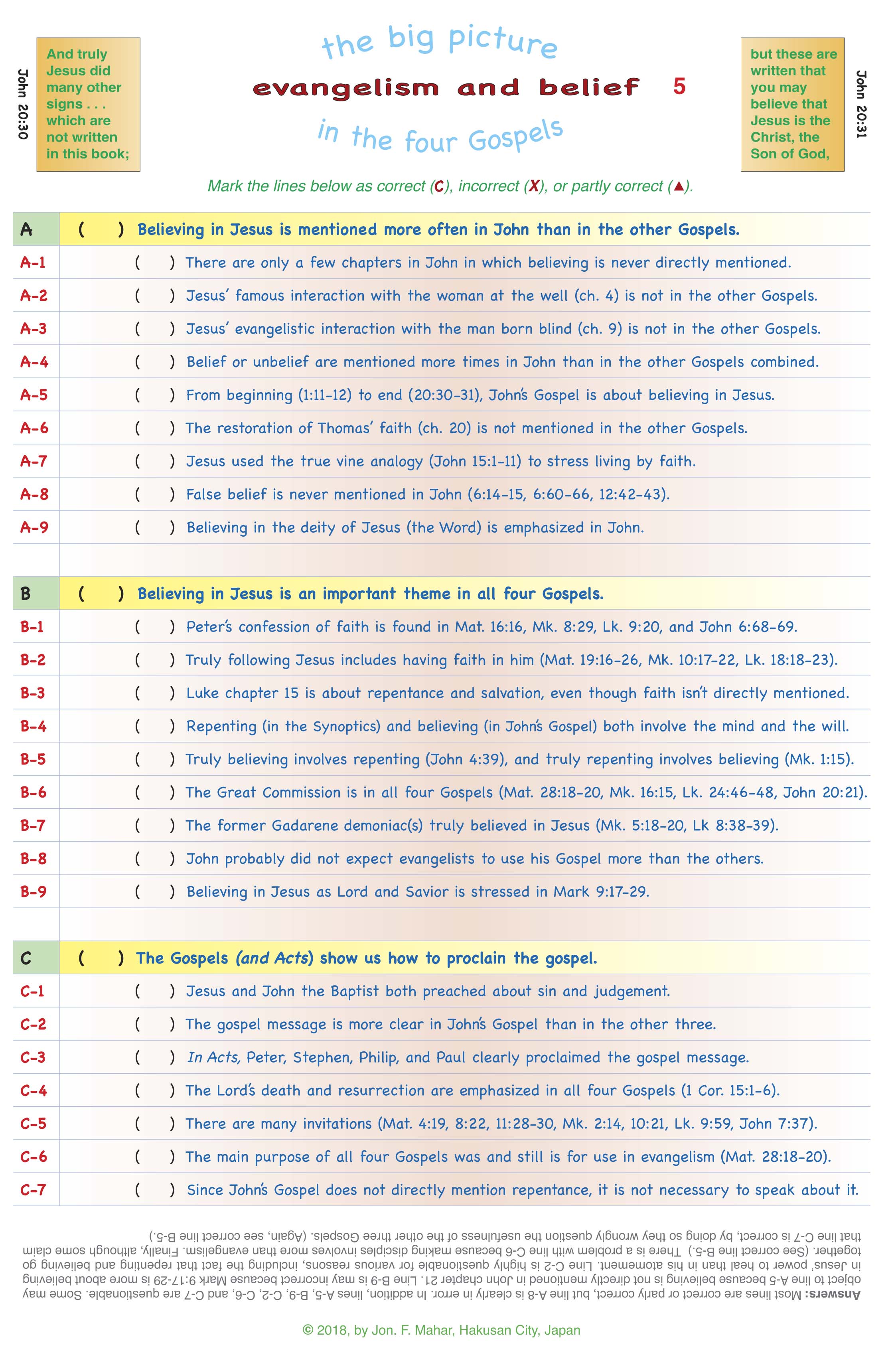 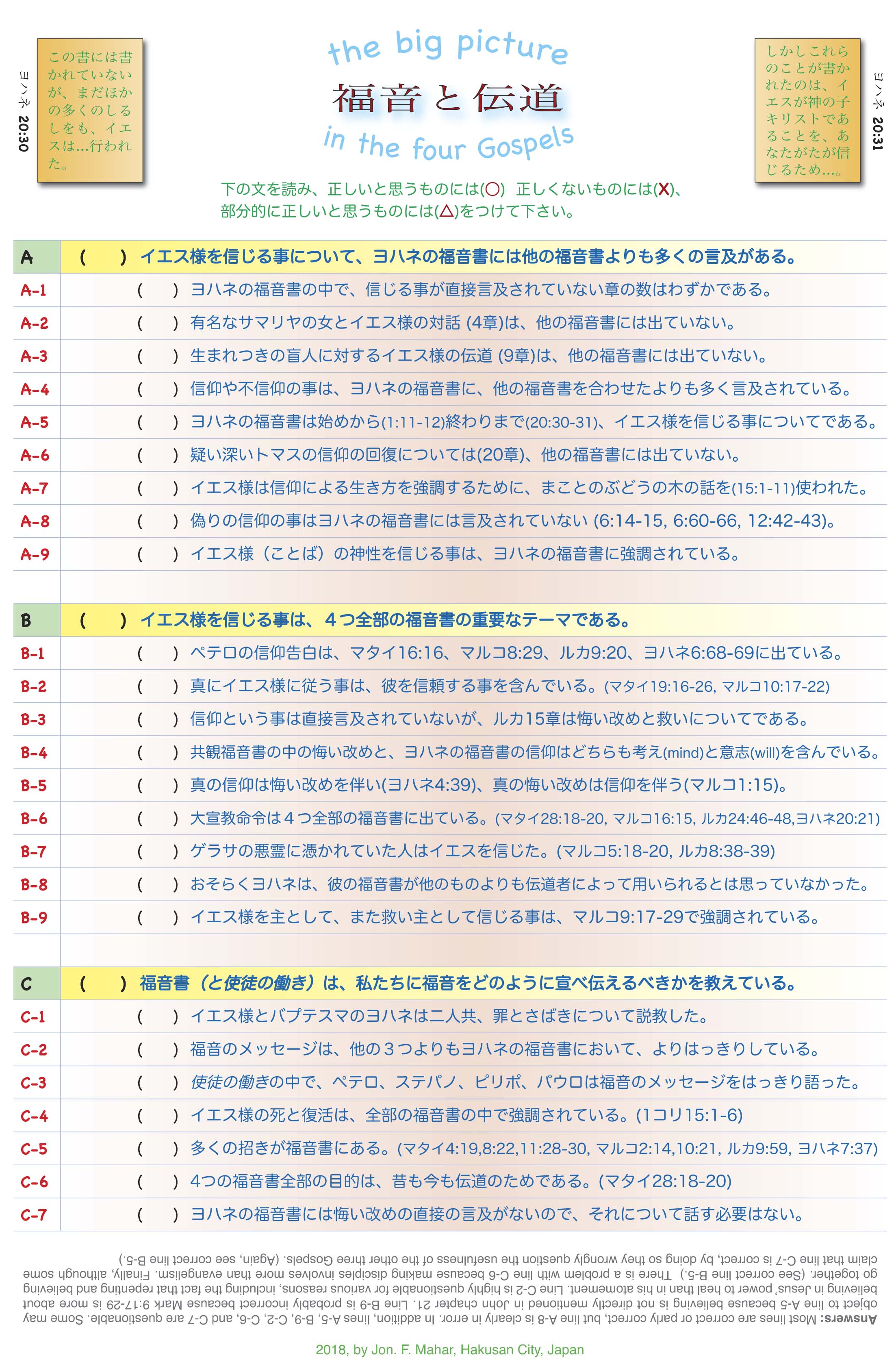 These worksheets are to be used in studies concerning QUESTIONS and QUESTIONING in the Gospels, along with summary chart #6 above which has the same focus. 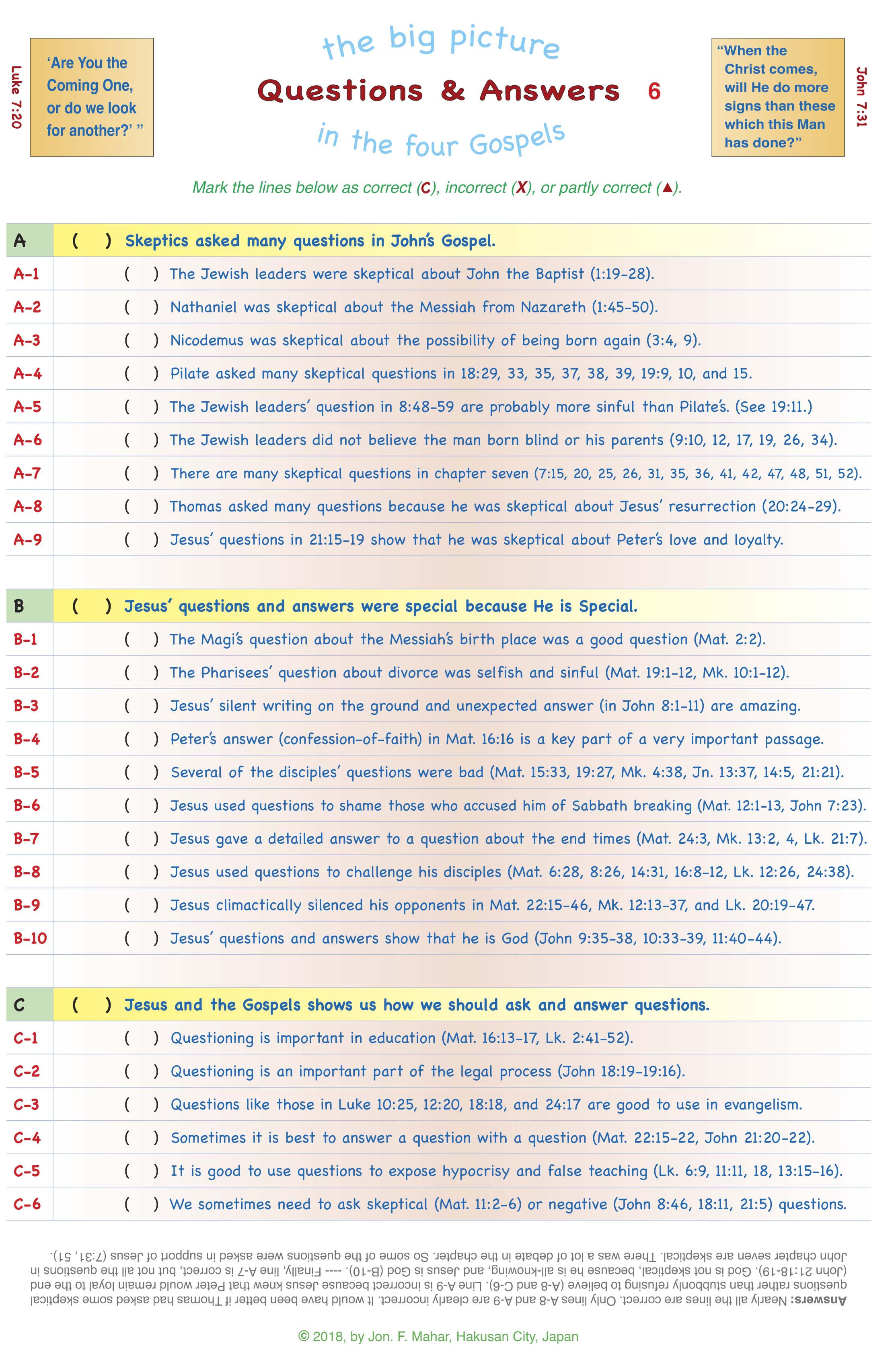 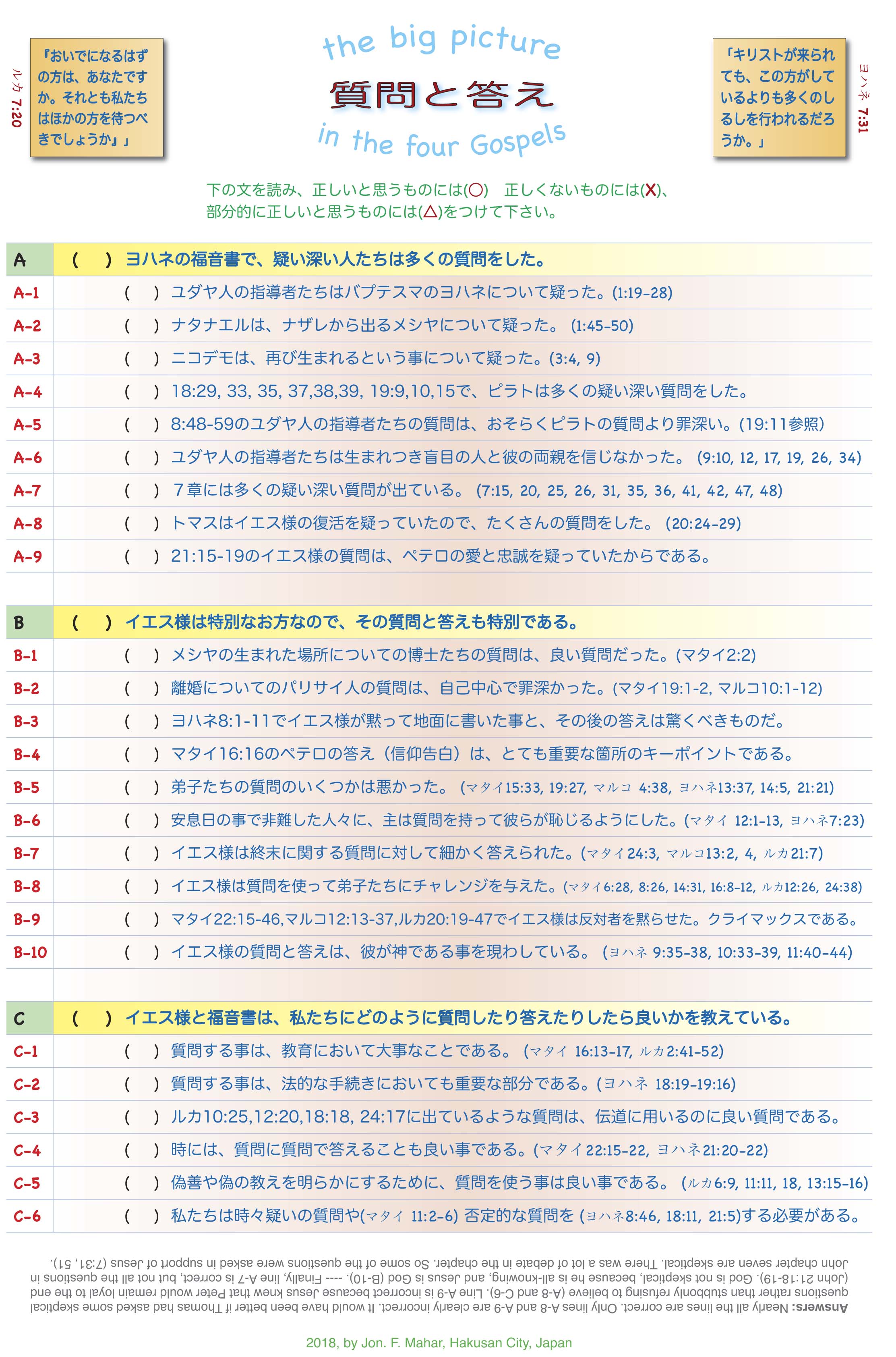 These worksheets are to be used in studies concerning JESUS' AUTHORITY and POWER OVER EVIL SPIRITS, along with summary chart #7 above which has the same focus. 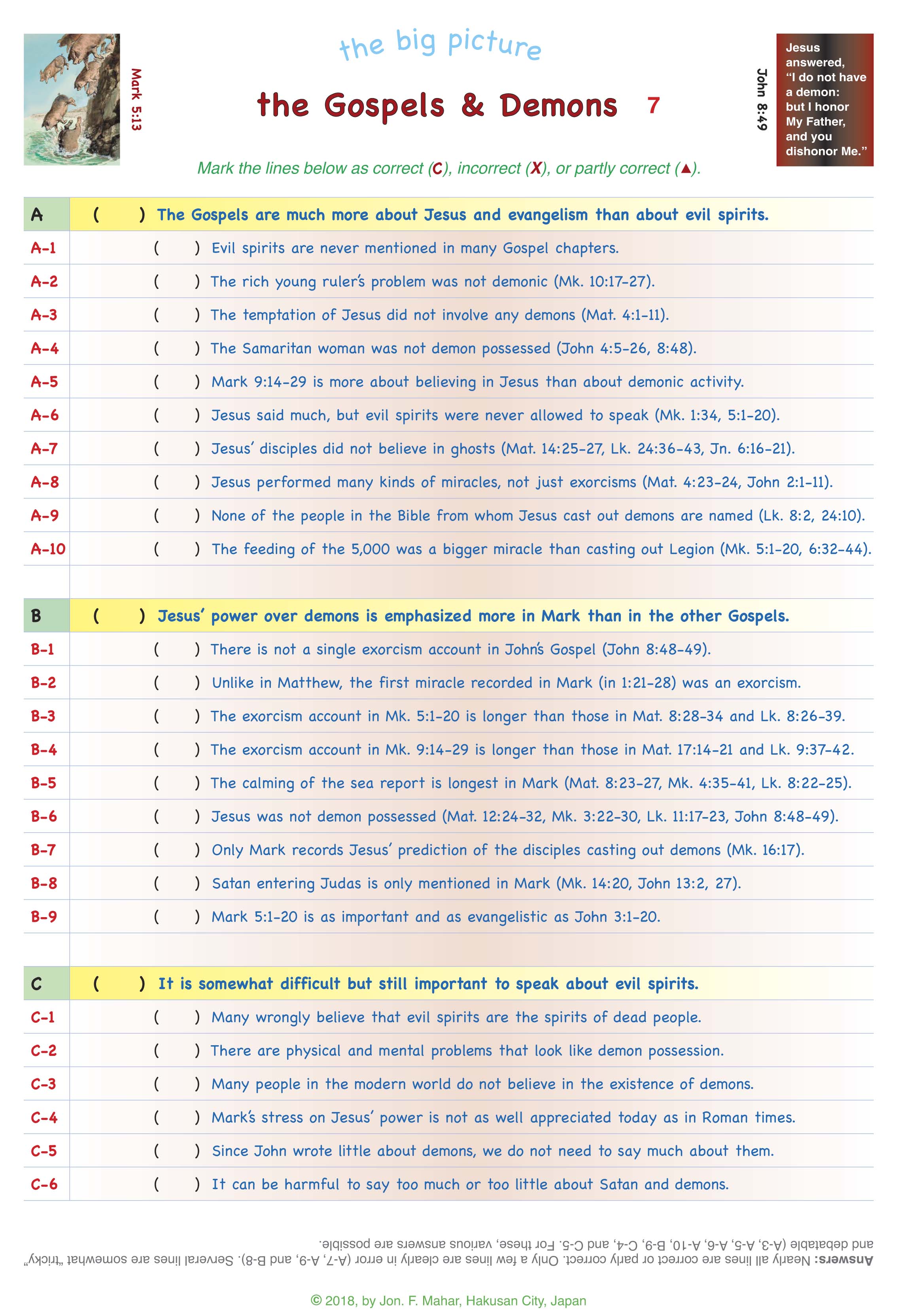 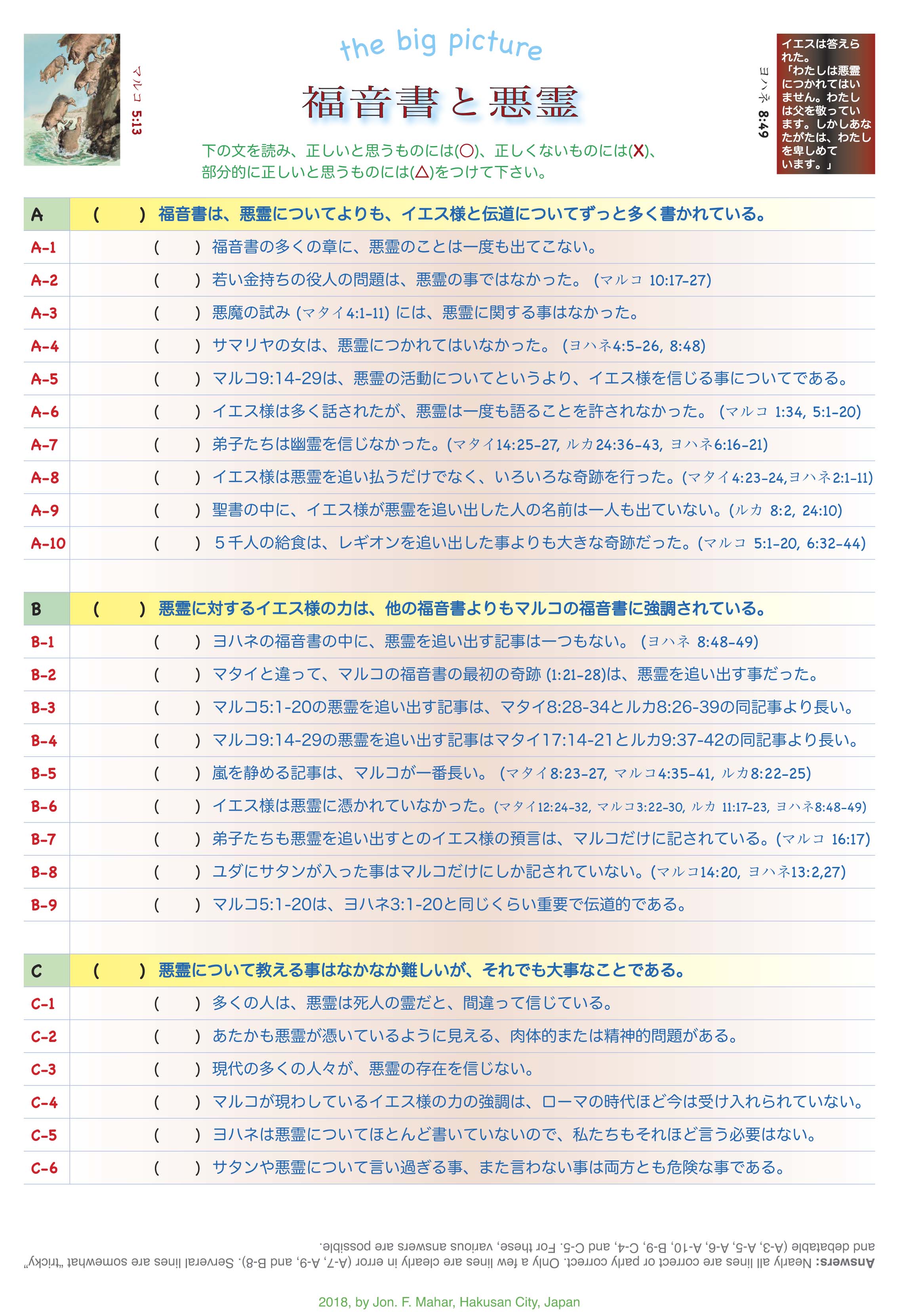 Participants are divided up into teams and everyone is given one of the Gospel summary charts. In each round one member of the team is given a chapter in one of the Gospels that the other member or members of his or her team are to guess. As in golf, the winning team after several rounds will be the one with the smallest number of hints given and wrong guesses made. After each hint, at least one guess must be made.

For instance, the leader may give a team's hint giver Luke chapter 21. A good first hint for this chapter would be, "I'm about the end times." A team member then might wrongly guess Matthew chapter 24. Next the hint giver probably should say, "I'm in Luke's Gospel." Then team members could easily guess that the right answer is Luke chapter 21. This round would resulted in four points, much like four golf strokes.

The game leaders should pick chapters about which he or she is prepared to speak after the right answer is given. Also, usually the chapters that are to be guessed should not be too easy. For instance, John chapter 15 is easy to guess since it is the only one which is about Jesus as the True Vine. It would be like a par two hole in golf. Mark chapter six is more difficult, however, since Jesus' walking on water is in three different Gospels and chapters. So it would be like a par four hole.

Each hint is like a single stroke in golf and may not contain two pieces of information. For instance the following sentence --"This chapter is about a great catch and the call of Matthew." -- contains two bits of information which would make guessing Luke chapter five too easy. It would be like hitting the ball twice rather than just once.

Which Chapter am I Game

Participants take turns choosing a chapter which others try to guess by asking questions that progressively narrow down the possibilities. One point is awarded to the person (or team) being questioned for each question asked. The answers will usually be "yes" or "no," though occasionally the answer must be "partly."

Once the Gospel and the general portion thereof have been determined, more specific questions will be asked such as about the chapter length, the percentage of verses that involve miracles, or specific chapter people or events.

As much as possible, at the end of the round, the leader should speak about the chapter and any parallel chapters in the other Gospels. Reading and discussing a portion of the chapter may be helpful as well. The purpose of the game is not just to guess correctly or score points!

Each participant is given a copy of a summary chart and after the leader explains some basics about the Gospels the game might begin with the leader shouting out, "the raising of Lazarus." The first member to stand and begin reading a fitting verse from John chapter 11 would earn three points.

If there is a great diversity of Bible knowledge in the group, the leader can even things up with hints such as by saying, "It's in John's Gospel." So beginners would have a good chance of winning or coming in second or third and earning points.

CAUTION: A wise leader will be careful to not spend more than five to ten minutes lecturing about the content of the Gospels before beginning the game. He or she should instead be prepared to teach about the Gospels while the game is being played, here a little, there a little. Also rules regarding the use of smart phones and tablets must be established before the game begins!