Check out these studies in Philippians.

1. DESCRIBING PAUL in Philippians Chapter One

Philippians chapter one is wonderful for describing Paul as a model believer, Christian worker, and soldier for Christ. Most of the descriptive phrases on the top half of the summary chart below are negative, since Paul's ministry was limited in some ways and because he said such negative things about those in Rome who were envious of him. Yet, for the most part Paul's attitude was positive rather than negative as shown in the descriptive phrases on the bottom half of the summary. Though he was under house arrest, he was still effective, and above all he was joyfully serving Christ.

Christ is mentioned far more frequently in Philippians, including in chapter one, than in most of Paul's other Letters. (Only tiny Philemon has a slightly higher frequency rate.) Perhaps the frequent use of Christ in Philippians in various phrases was intended to stress the supremacy of Christ over Caesar. Paul's critique of selfishly ambitious preachers in Rome (1:15-16) may also have been aimed at turning the Philippians against ambitious Roman ways and toward the way of Christ the Servant who is describe in chapter two. Thus Paul seemed to stress having joy in Christ rather than in Rome from the beginning of his Letter, 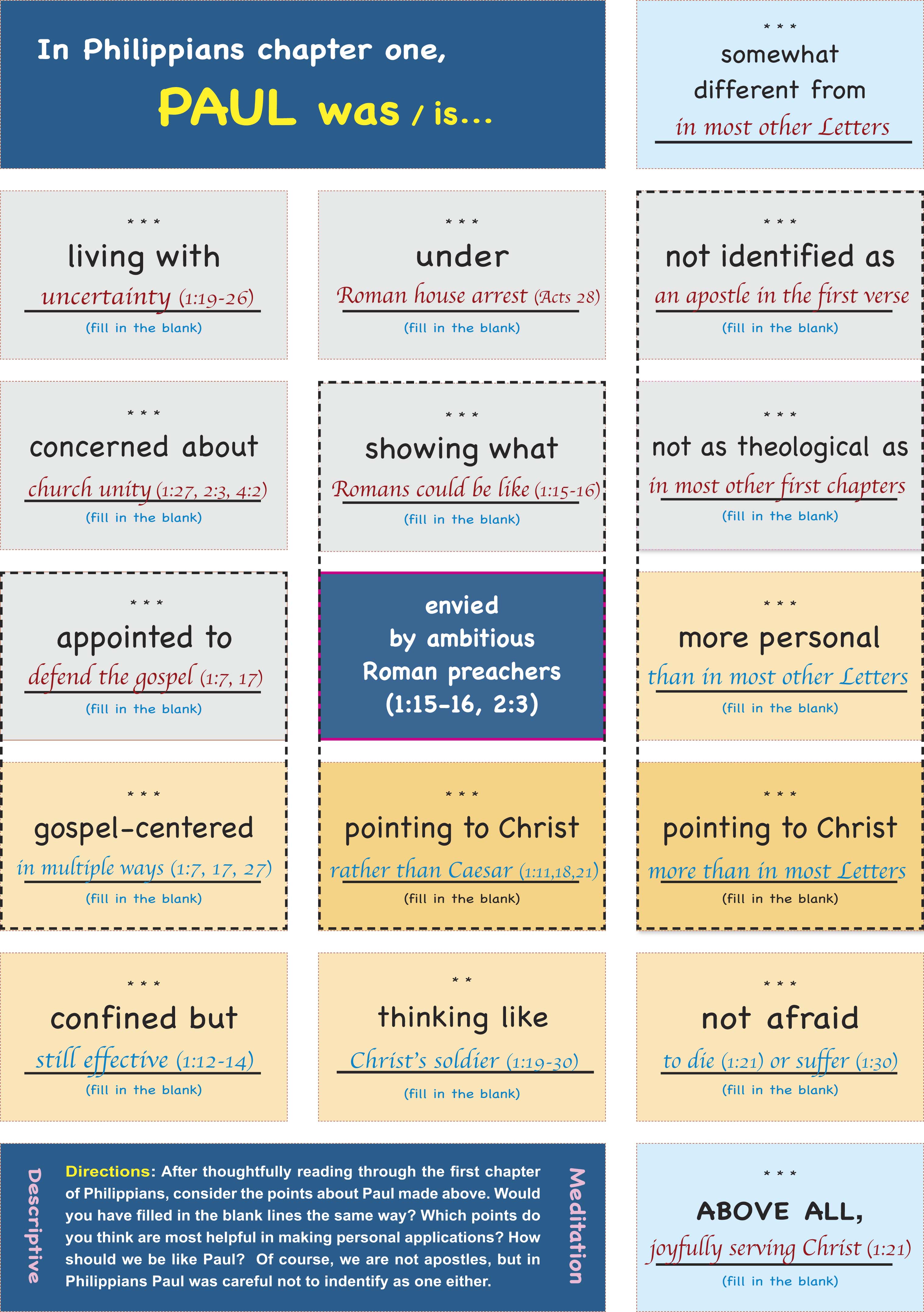 Simply following the directions at the bottom of the summary chart above should lead to interesting small-group discussion on various points including on what may be the best applications. Joyfully serving Christ like Paul did, is one such. In order to encourage this, Paul seems to have deliberately not referred to himself as an apostle in 1:1. His readers could not be apostles, but we all can try to serve humbly like Paul did rather than be overly ambitious and selfish like some of the Romans.

Since Philippi was a Roman colony where many retired Roman soldiers lived, honorable service was an important and fitting topic. So in chapter two Paul described such in five somewhat overlapping sections. The greatest example of faithful service unto death is, of course, that of the Lord Jesus (2:5-11). Timothy and Epaphroditus were lesser examples, but they well-known by those at Philippi.

Use the summary chart below as a guide as you read through the chapter verse by verse and section by section. As you do so, you will notice that various details—such as willingness to suffer—appear again and again. This is as we might expect, since honorable service is stressed throughout.

Unity and harmony within the ranks was also important in the Roman army. So it is natural for that to be mentioned prominently in the first part of the chapter. In addition, Timothy and Epaphroditus were available to be sent on special missions much like some Roman soldiers who were more trustworthy than others. (Notice the similarities between these two men, even though there were differences as well.) 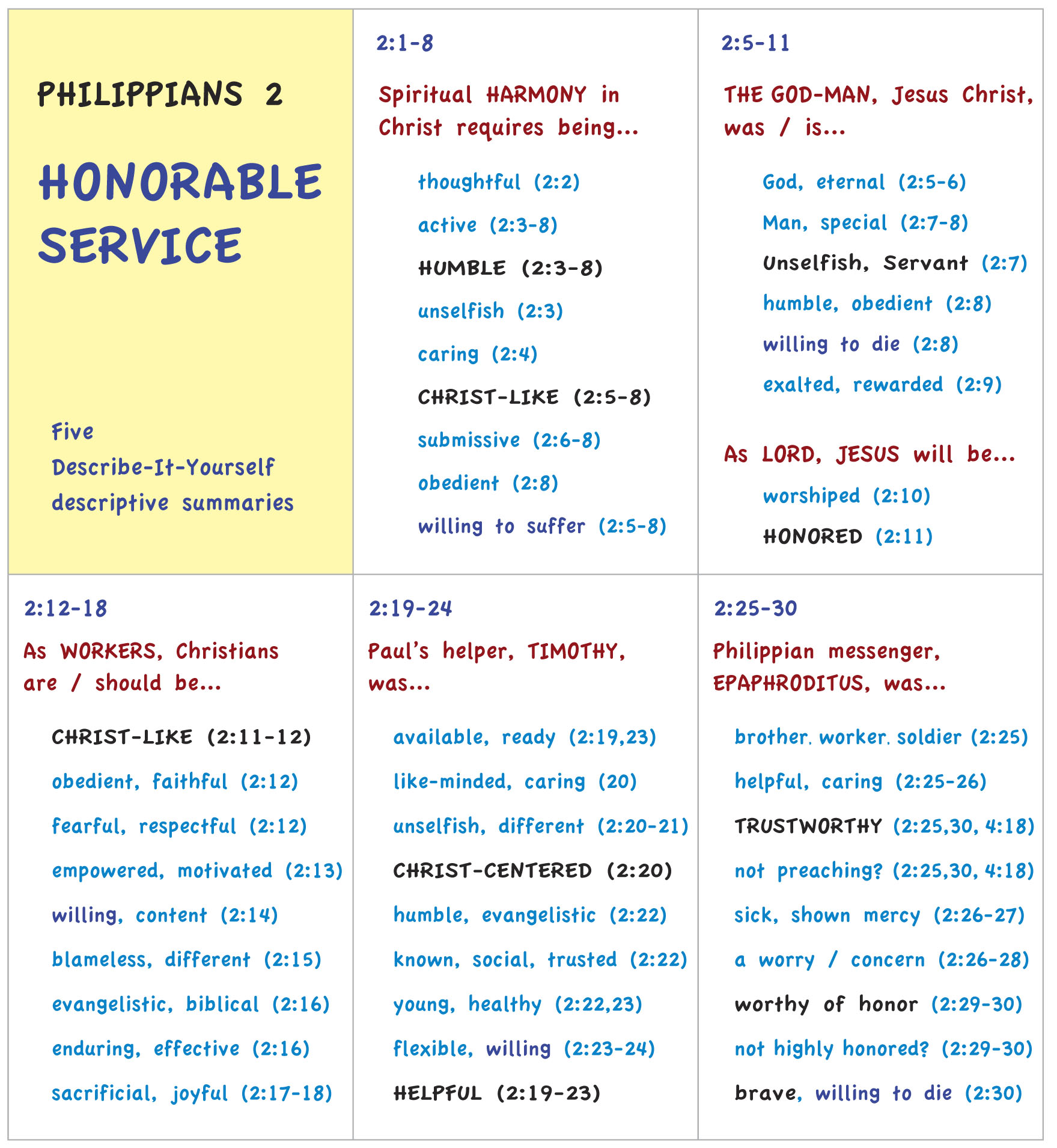 The various descriptive terms and phrases in his summary chart are based on those in the Describe-It-Yourself set of 1,300+ cards and fast-scroll list.

This study on Epaphrodutus in Phil. 2:23-30 and 4:16-19 is one of 20 in the Lesser-Known but Significant Servants series which as a whole shows that everyone who serves the Lord is important, not just those who are well known. The ministry of Epaphroditus to Paul in prison was not at all glamorous. Rather it was dangerous, because of the travel involved (4:18) and the unhealthy conditions in the prison. Epaphroditus, in fact, nearly died (2:30). Paul said he was to be highly regarded (2:29) for his service and referred to him as his fellow soldier (2:25). Perhaps he had not been highly regarded by some in the church previously for some reason.

4. Right Rejoicing: The Way to Safety

The four steps in the W.A.L.K. Bible study method are easy to understand and help bring out the meaning of the passage being studied (in this case Phil. 4:4-7) in a way that naturally leads to fitting applications. The third (L) step which compares the text to other texts and to other things in daily life is especially helpful. In this study, the rejoicing in the Lord in Phil. 4:4-7 is compared to Paul and Sinus rejoicing while in jail (Acts 16:25) and to the safety that a strong defensive fort brings. This analogy fits the situation in Philippi well, since it was a Roman colony with many retired military living there. In order to be safe in their thinking as Christians, they needed to rejoice in the Lord rather than in earthly connections (to Caesar or Rome, Phi. 3:20) or circumstances (Phil. 4:11). The same is true of us.

W.A.L.K. Bible StudiesRejoice in the Lord

5. All Things Through Christ

Phil. 4:13 I can do all things through Christ who strengthens me.

In this study, we will use Describe-It-Yourself cards / terms that begin with the letter "P" to describe and think about this practical, powerful, peaceful, and proper verse. These four appropriate terms are used in the summary chart below, but there are several other P-terms that can be used to aptly describe this verse as well.

Click the button below to view all 114 of the P-terms in the Describe-It-Yourself set. For a lively group study, make as set of cards and take turns turning them over and discussing them. This can be done as an Apples-To-Apples ® like competitive game if desired. On average, about every fourth or fifth card will have an appropriate term or phrase.

Think about what this verse meant to Paul himself. Obviously, he did not view it as "a popular verse" like we do today. However, it certainly was a powerful and proper statement.. What else was it for Paul? Go through the full set of P-cards for help with this.

Caution: it is important to think about what this great verse becomes if Christ is left out or if the will of God is not carefully considered. Sadly, many have tried to apply Phil. 4:13 selfishly to things that are not God's will. When this is done, the verse becomes a proud and perverse statement. So special attention needs to be paid to how the verse is applied. Though prayer is not mentioned in the verse, we must be prayful about God's will.

Blank Cards: there are a few blank "wild cards" at the end of P-term list. These can be used to write in additional descriptive terms. For instance, it is good to remember that Phil. 4:13 was a prison verse, since Paul was confined in a prison in Rome when he wrote Philippians. This makes the positive nature of the verse all the more amazing.