Check out these four great studies in Jonah.

The core written message of the book is that "salvation is of the Lord" (2:9) rather than through idols (2:8-9). The two great contrasts in the book which illustrate the message are 1.) between rebellious Jonah and the repentant Gentile seamen in chapter one and 2.) between the teachable and repentant people of Nineveh in chapter three and the unteachable and selfishly rigid Jonah in chapter four. 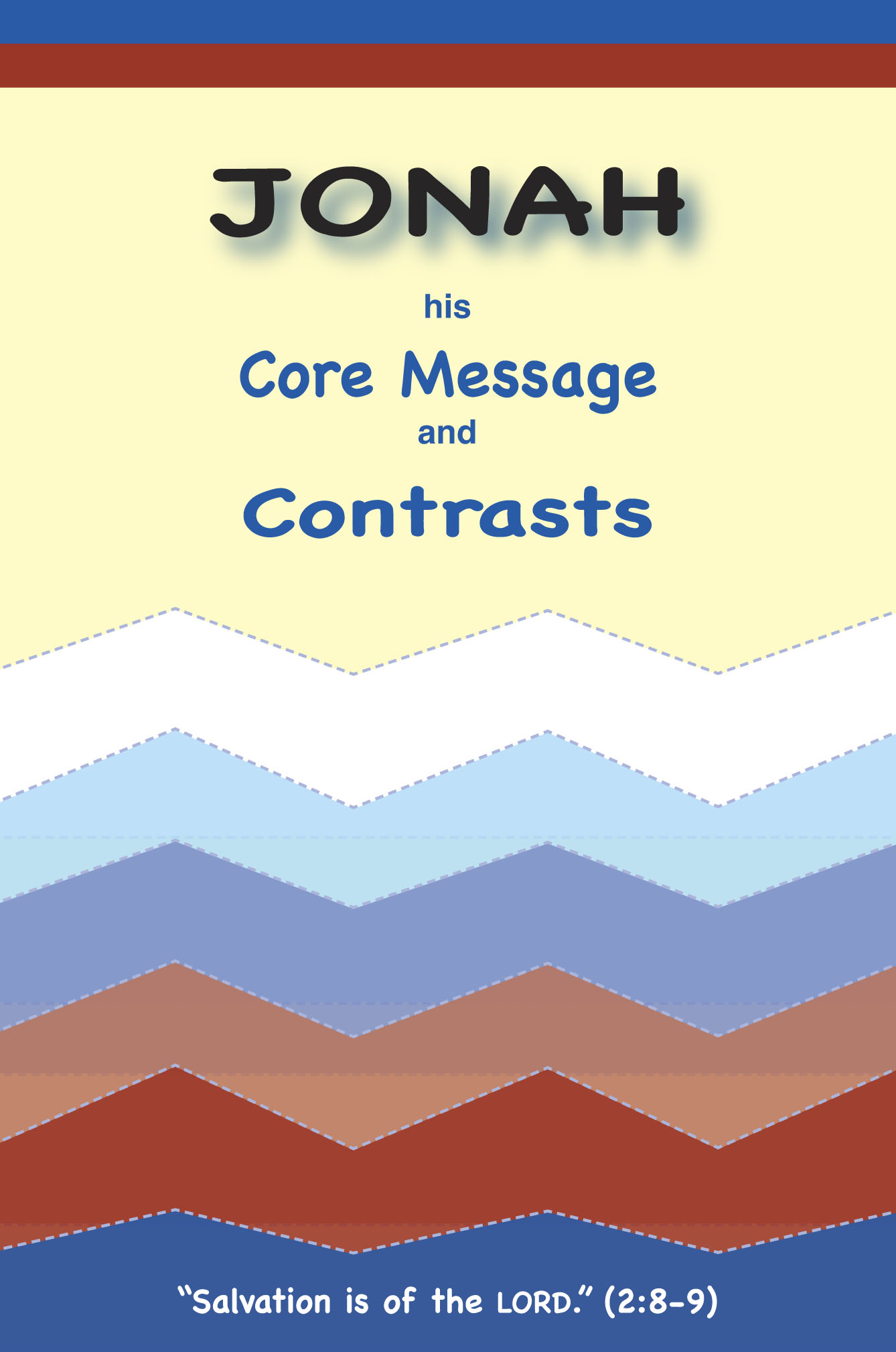 The book was probably originally written for the idolatrous people of the northern kingdom of Israel, which included Jonah's home area (2 Kings 14:25). His goal as a written prophet was to lead his own people to repentance. Apparently, he himself eventually repented for otherwise we would not have his book. Another indication of his repentance is the book ending with a question from God (4:11) without an answer from Jonah.

The contrast between the disobedient Jewish prophet and the Gentile seamen make this an interesting cross-cultural study which is one of six in the Socially-Sensitive Double-Top Bible Studies series. The first worksheet (below) is used to describe and discuss Jonah. 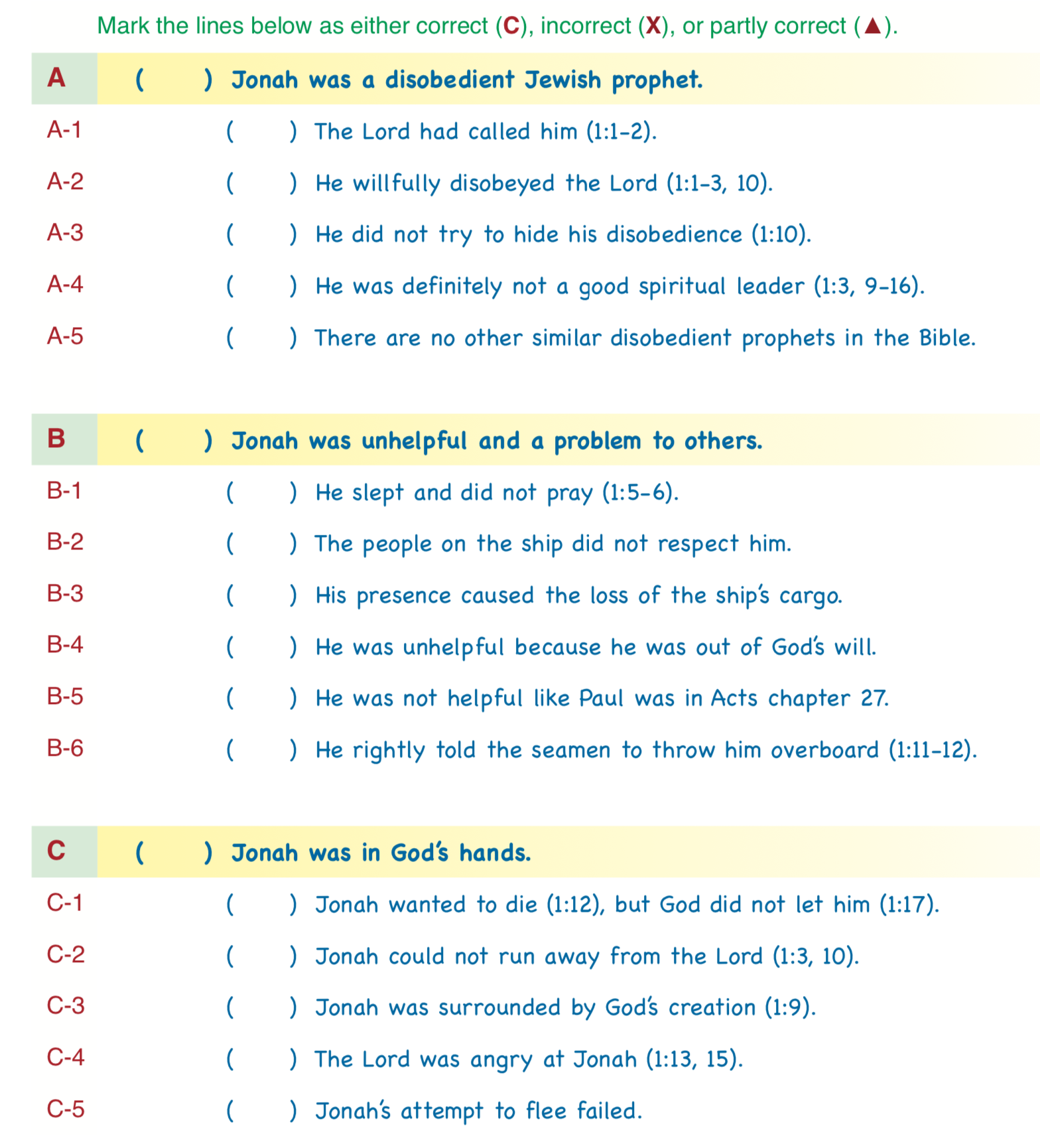 The second workshop (below) is used to describe and discuss the seamen, with the final (F) group of lines aimed at the main points of contrast between them and Jonah. Obviously both worksheets are designed to help promote lively group discussions. 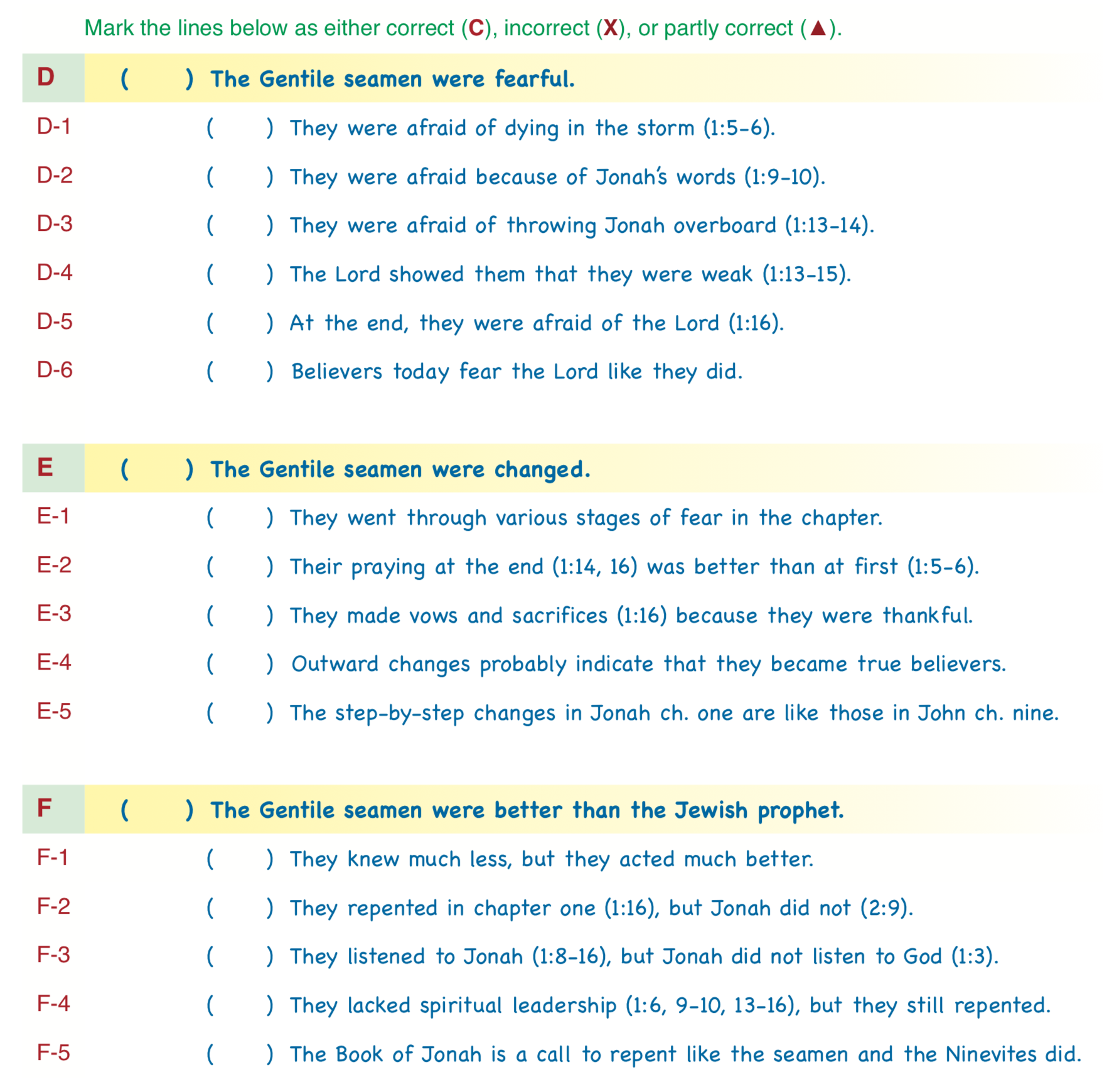 The answers to the worksheets are brought out conversationally through a number of imaginary characters representing various points of view, as seen on the page below. Notice the disagreement and debate between Cal and Wes. Their opinions are obviously someone one-sided but still mostly correct. Dr. Quest has the final say and represents the author's point of view. 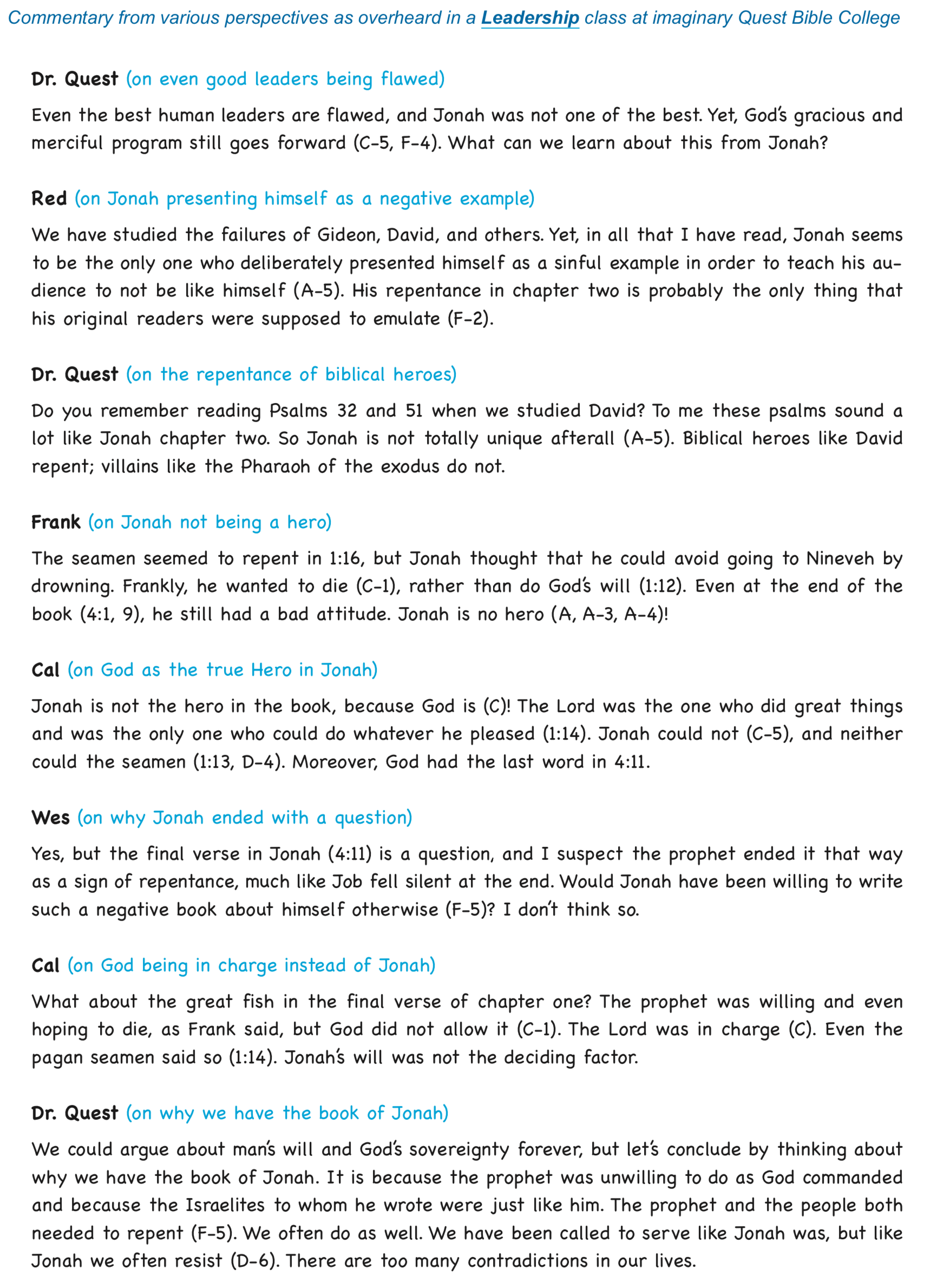 APPROACH
One of the best ways to study a short chapter like Jonah chapter two is to simply describe it. This can be done in a small group using a worksheet or list like the one below.

There are three possible ways to judge each line. 1.) If you totally or mostly agree with the descriptive term or phrase, mark it as correct (C). 2.) If you totally or mostly disagree with the line, mark it as incorrect (X). 3.) However, if you think the line is somewhere between 20% and 80% right, mark it with a triangle (△). Obviously this third option is very subjective, but that is actually a good thing since the purpose of each line is to help promote discussion and truth discover rather than to quickly come up with a perfect black or white answer.

Caution: Some of the points below are, of course, incorrect. Which ones?

ANSWERS
‍We could argue about many lines, since several may be partly correct. For instance, prayer is important in the chapter, but it is probably too much to say that Jonah 2:1-10 is mostly about prayer. Similarly, the chapter is an unbelievable story to the unsaved, but it certainly is NOT to us in light of the existence of God and the testimony of other scripture. Also, in a way the chapter is personal since Jonah is speaking. Yet, at the end of the chapter (2:8-9) the focus turns to those who forsake God to worship idols, as Jonah's readers in Israel had done.

The chapter is short but very important. Moreover, it is not just a story, because it a highly personal record of what Jonah experienced, thought, and did. The focus on idolatry near the end shows that the chapter is also a sermon which contains the core message of the book. Jonah used his experience to illustrate the true way of salvation through the Lord (2:9) and to contrast such with idolatry.

Both Amos and Jonah were closely connected to the northern kingdom (Israel) and spoke against its useless idols. So Jonah 2:7-9 is in line with Amos 5:4-6. Moreover, Jonah 2:7-9 are three of the most important verses in the entire book. Both prophets showed that there is no deliverance through idolatry.

Some understandably use the "Salvation is of the LORD." line (2:9) to stress God's sovereignty. However, the main focus in Jonah 2:7-9 is the contrast between worthlessness idols and the living God of Israel who answers prayer. Jonah' core written message was aimed at his own people, personally illustrating for them how to return to the Lord and be saved or delivered from an impossible situation. Jonah was evangelistic.

Was the great fish that swallowed Jonah necessary? God could have saved his wayward prophet though other means, such as with a floating log, shoreward tidal currents, and divinely directed wind. Alternatively, the Lord could have sent an angel to protect Jonah like he did for Daniel. Yet, the Lord's unusual provision for Jonah was a great fish. Why?

Jesus' words in Matthew 12:40 show that one of God's purposes in putting Jonah in the tomb-like belly of the great fish for three days was to foreshadow the resurrection. Obviously, surviving three day at sea with the help of a log would not have foreshadowed the resurrection nearly as well.

There must have been a purpose in Jonah's day as well, and this is implied by the connection between the great storm (1:4) and the great fish (1:17). Both of these were from the Lord, rather than from Baal, the so-called storm god, or from Dagon whose name in Hebrew sounds much like the word for fish. Both the great storm and the great fish showed that the Lord is God, rather than Baal or Dagon. Therefore, it is significant that idolatry is strongly condemned near the end of chapter two (2:8-9). Salvation is of the Lord (2:9). 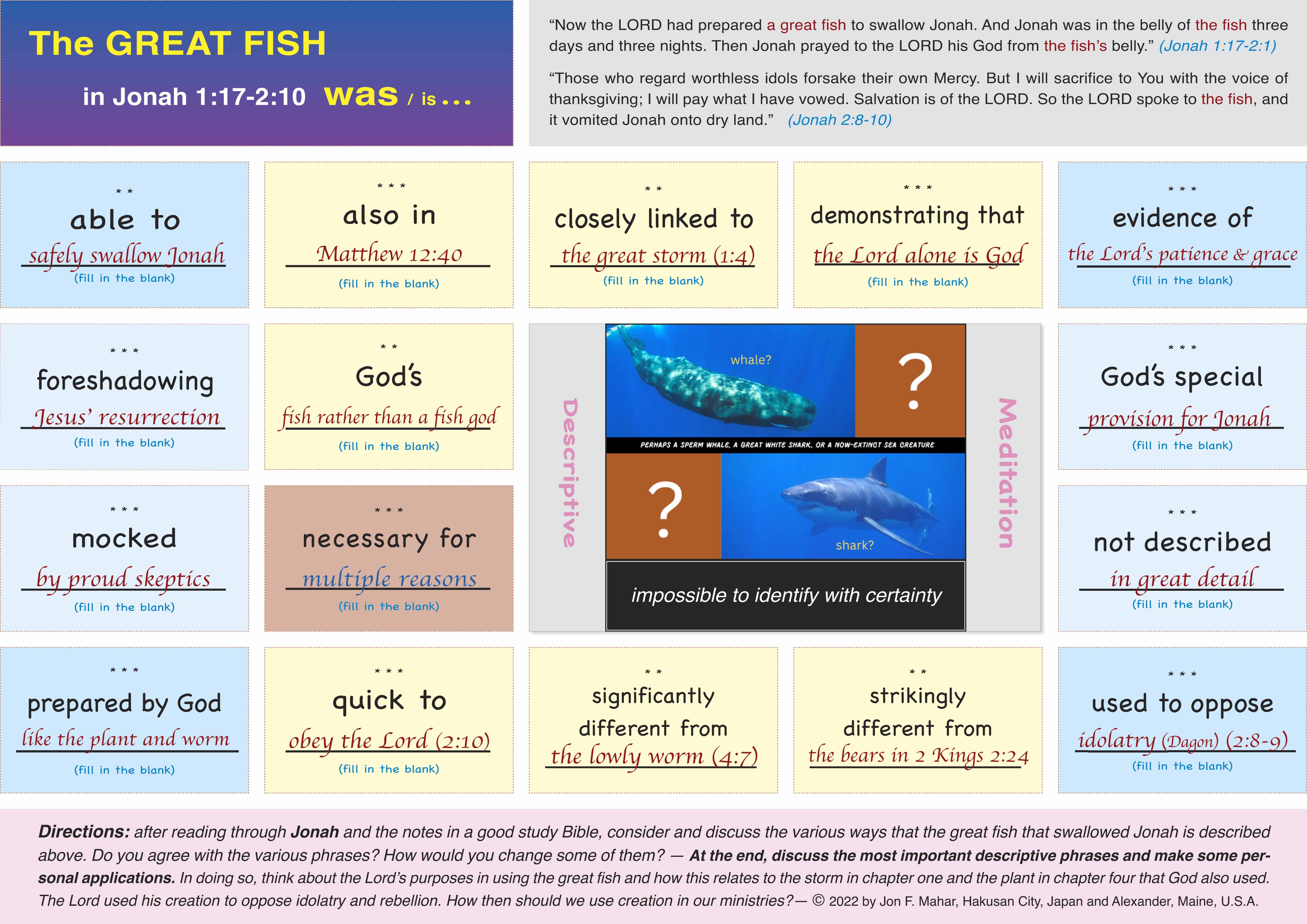 Was it a great fish or a whale? We do not know, since it is not described in detail and because the terms used could refer to either. A sperm whale is often suggested since its throat is large enough to swallow a man whole. And, of course, it may actually have been a larger shark or something else.

Why isn't the great sea creature described in detail? The main reason was probably because the focus was primarily on Jonah and the Lord. There may be another reason, however. By limiting the description, the key Hebrew term "dag," meaning fish or fish-like creature, stands out more. This, in turn, may have pointed to Dagon, the god that was worshipped by many in the Euphrates valley as well as by the Philistines.
Like all idols, Dagon, could not save anyone (2:8), but the Lord who made all things could use a dag (a fish or a whale) to save Jonah if He chose to do so. The great fish was God's fish rather than a fish god.

Agricultural god or fish god? Some object by pointing out that the Hebrew term for grain also sounds much like Dagon. So many scholars believe that Dagon was an agricultural god. Ok, but why couldn't Dagon have been both an agricultural god and a fish god? Most idolaters worship more than one god and mix various ideas and images lest they overlook something. (See Acts 17:23.) In addition, in chapter four, the Lord is the One who makes plants grow (4:6) and the One who cared about livestock (4:11). The Lord is to be worshipped rather than Dagon or any other idol, including the idols shaped like a calf that Jeroboam sat up. (See Second Chronicles 11:14-15.)

How should we apply this study? First, Jonah is against idolatry, which is associated with covetousness (Col. 3:5). So we should not lust after things. Second, like Jonah, we should point to the Lord through his testimony in creation. Storms, great fish and whales, helpful plants, livestock, and even lowly worms (4:7) all still point to him. Third, we should speak of the resurrection of the Lord Jesus, the greatest of all miracles.

Go to the Special Animals page.

LISTS & QUESTIONS
After reading through the two chapters, ask yourself or your group questions like the following. Do you agree with the contrasting descriptive terms and phrased in the lists below? Are there some important terms that should be added to the list? Which point in each list do you think is the most important? Is there one particular descriptive term in each list that could be used to summarizes all the other terms in that list? How about 'teachable' and 'unteachable' or 'repentant' and 'selfish.'

ANSWERS & APPLICATIONS
In addition to being mostly unteachable and selfishly rigid, Jonah was also much like Israel in the wilderness since he was quick to complain and angry at God. In contrast to the wayward Jewish prophet, the Ninevehites were teachable, repentant, and much like the Gentile seamen in chapter one. The obvious general applications are 1.) to be teachable and beleive God's message like the Ninevehites and 2.) to not be like unteachable and selfish Jonah.

The only constructive thing that Jonah did in chapter four was to selfishly build a shelter for himself (4:5). Otherwise he was mostly inactive. Thankfully, God was active, however. He patiently corrected and counseled Jonah, as indicated by the many questions in chapter four. Yet, the only thankfulness that the prophet showed was for the plant that provided temporary relief from the heat (4:6). Thus, even Jonah's gratitude was selfish and short lived. How about ours? For what do we give thanks?

Chapter four shows that selfishness, sinful anger, and lacking concern for others are all closely related. So we should not be selfish, hardhearted, and angry at God like Jonah was. His anger is mentioned four times (4:1, 4, 9, 10). God's anger was righteous (3:8-9), but Jonah's was not. Neither is ours much of the time.

AN ALTERNATIVE APPROACH
Alternatively a set of 32 cards (or more) with the descriptive terms shown on the two lists could be prepared. Then after reading chapter three, group members can take turns selecting cards and terms which they believe correctly describe the Ninevehites, explaining their choice as they do so. The same procedure could be followed for chapter four and the description of Jonah. If the group's level of knowledge is high, both chapters and descriptions could be done at the same time. It could even be done as competition between two teams. Near the end, the group should be led in a discussion of what are the most important or central descriptive points. The cards could then be arranged on a table in a pattern in such a way that the main points stand out.