A Closer Look at JOB

Check out these various ways to study Job.

1a. Questions in Job: Summary Charts

The color-coded charts of Job below show where the many questions in the book are found. There are more of them in Job than in any other book because of the debate and lack of understanding on the part of Job's three 'friends.' This in turn was because they did not have the Scriptures and were dependent upon observation and reason. Man's ignorance is stressed.

FOR STUDY: 1.) Notice how the book of 42 chapters is divided up into six sections. 2.) Discuss the questions asked on the summary chart and 3.) discuss the nature of selected questions on the chart and answers given, if any are given. (Many questions are rhetorical.) 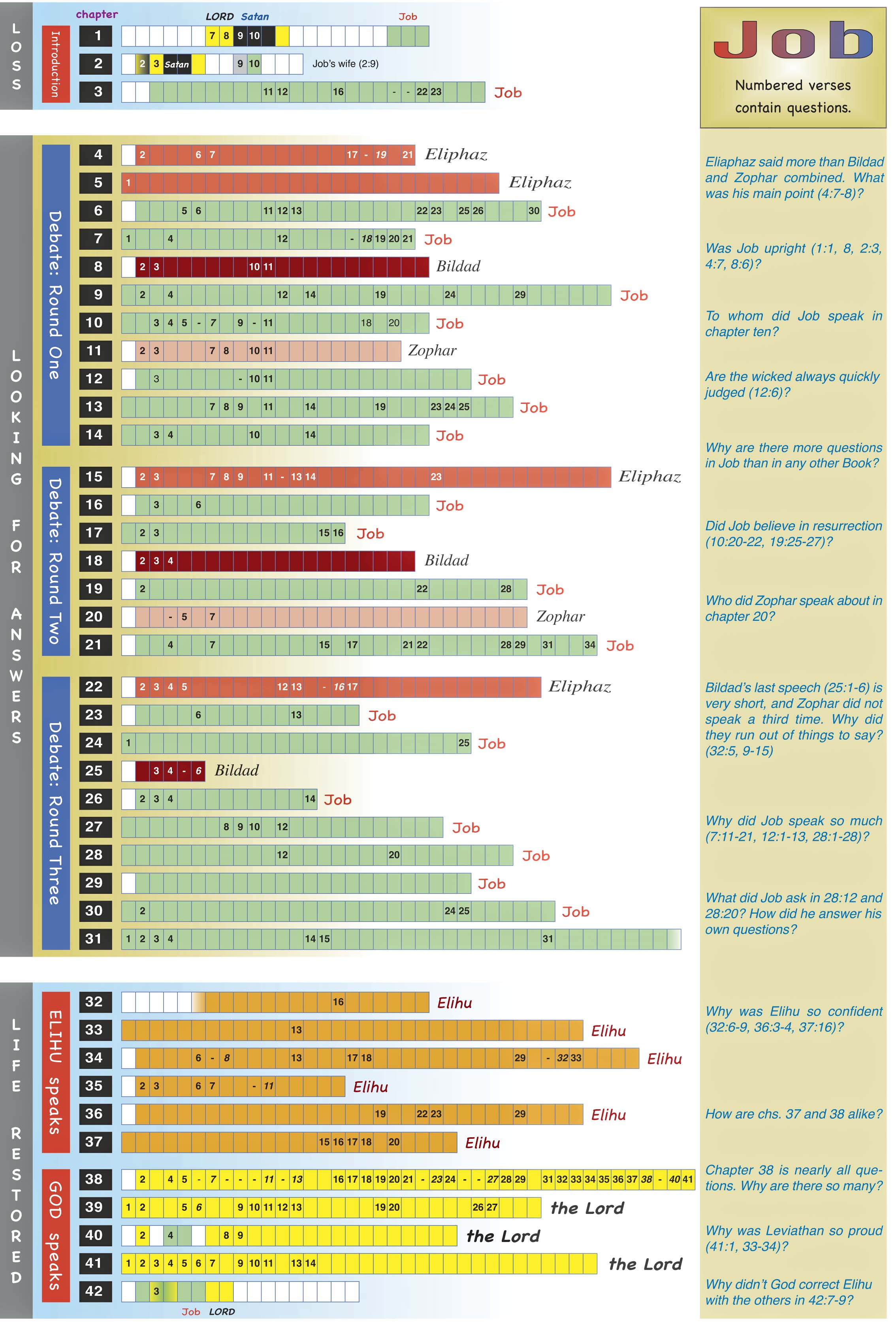 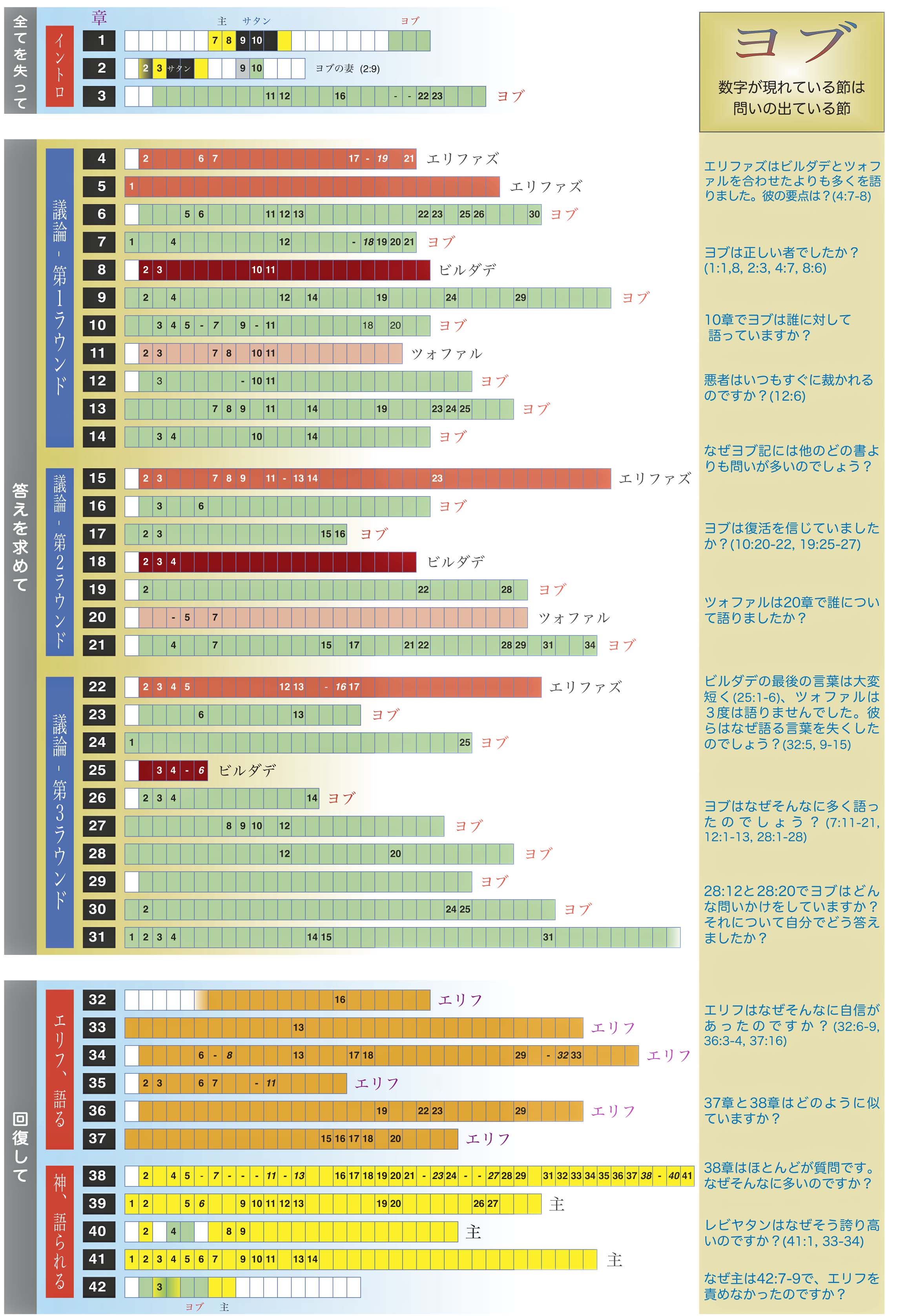 1b. Questions in Job: DESCRIBE-IT-YOURSELF Cards

Cards from our DESCRIBE-IT-YOURSELF set of 1,300+ are used to describe selected questions (or answers thereto) found in Job. The opening question in each study is always, "How would you describe . . . ?"

For instance, how would you describe the longest question in Job, the one the Lord asked about the creation of the oceans in 38:8-11? "38:8 Or who shut up the sea with doors, when it burst forth, as if it had issued out of the womb? 38:9 When I made the cloud the garment thereof, and thick darkness a swaddling band for it, 38:10 And fixed my limit for it, and set bars and doors, 38:11 And said, This far you shall come, but no further: and here shall your proud waves be stopped?”

The cards below were chosen from the Describe-It-Yourself deck by the study leader and were freely discussed by those in the group. At the end of the study, the cards were arranged as shown to help bring out the fact that God's main purpose in asking such a long, difficult, and poetic question was to humble Job. Above all, it was a humbling question.

GAME FORMAT OPTION
The DESCRIBE-IT-YOURSELF cards can be used for an interactive "game" somewhat like "Apples to Apples" ®. If this method is used, each group members is given a random set of cards from which he or she selects one card to play in each round. The various cards played in a given round are then compared and one winning "best" card selected each time.

For instance, if the five cards shown below were to be played in a round, the judge (who does not play a card) would probably select humbling as the best card, though the merits and demerits of all cards played should be discussed. Someone might, for instance, point out that God's question to Job was more theological than philosophical. At the end of the game, all "best" cards should be compared and judged to determine the main point of the question or answer being studied. 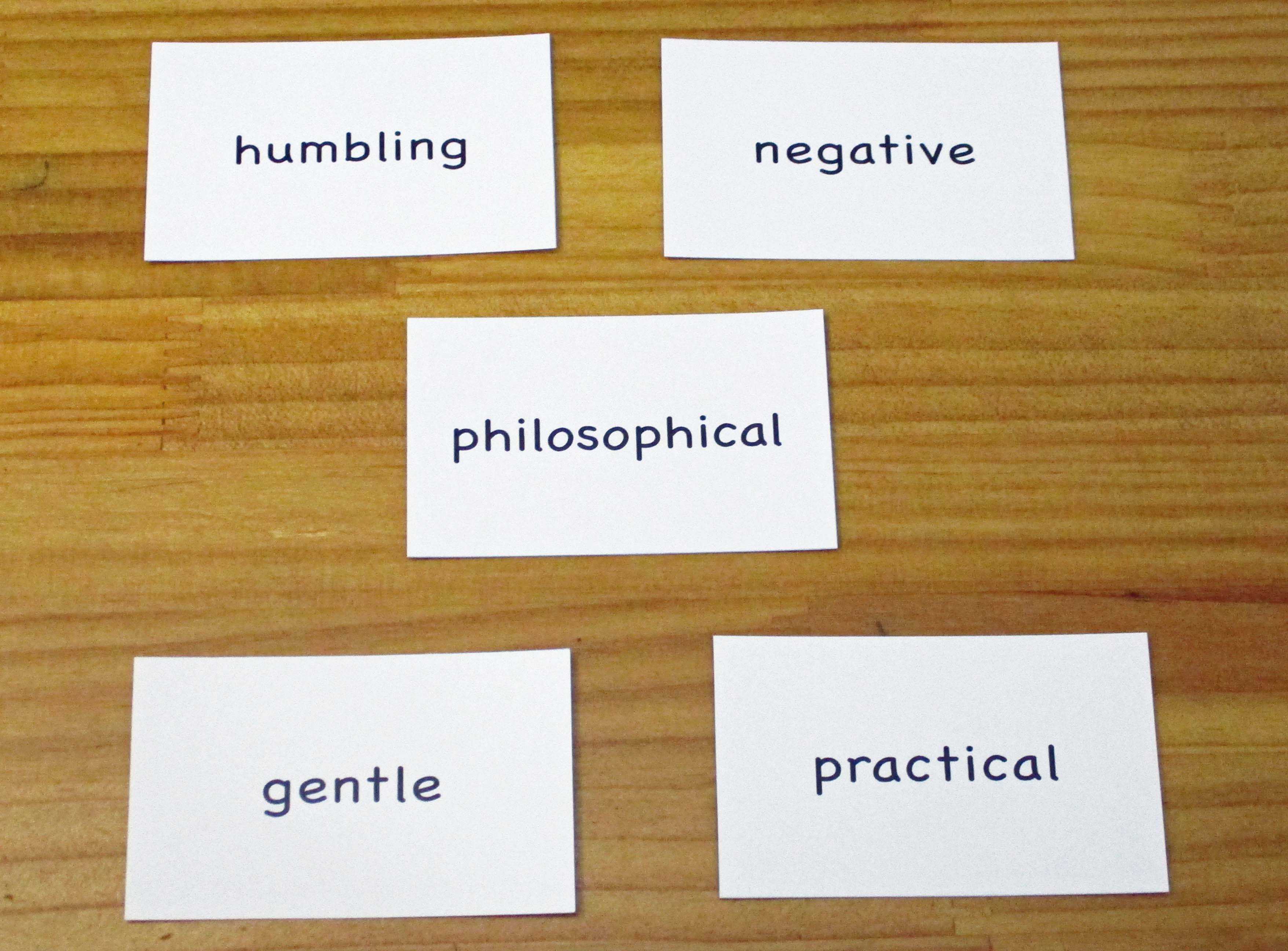 2. Associating Job with Others in the Top 55

Job's three friends were not very helpful, and had to repent at the end. Young Elihu in chapters 32 through 37 spoke much more like God did in chapters 38 through 41. He was not commanded to repent. -- This short study is part of the Lesser-Known but Significant Servants series and shows that youthful servants are sometimes better than older ones. He seems to be somewhat similar to Timothy in the New Testament. The third of four pages and one of two worksheets in this study is shown below.

lesser-known servantsElihu: as a theologian 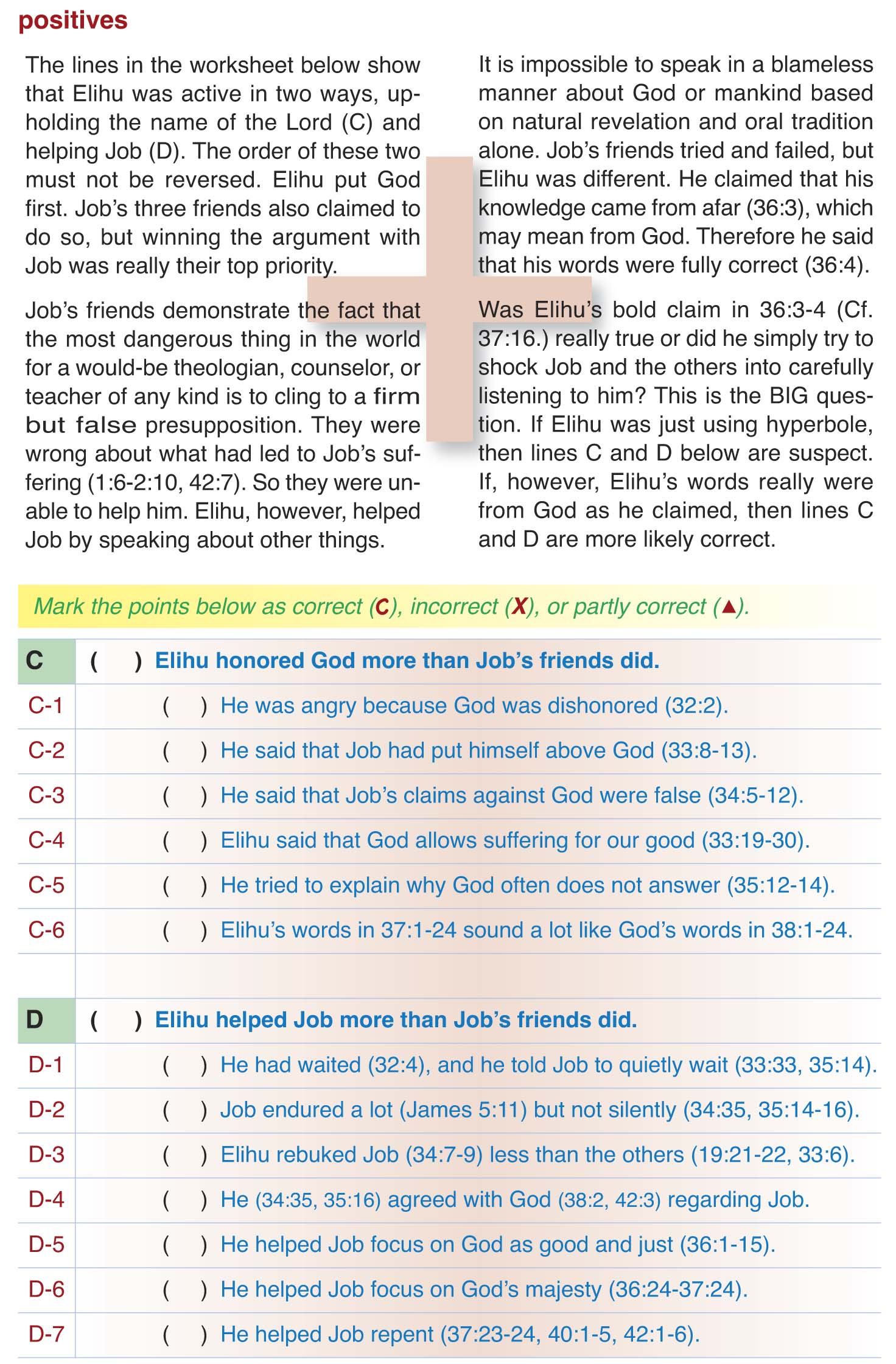 What was the Creator teaching Job?
The identity of Behemoth is controversial, but God’s purpose in describing it to Job is not. As with Leviathan in the next chapter, God was speaking to his servant about human weakness compared to the greatest of animals and himself. Behemoth was so great that it was free and unhindered since it could not be controlled by any human being (40:19-24). Therefore whatever behemoth was, it was a gigantic object lesson.

What are the applications for us?
Lest we miss the point of the Behemoth passage by only focusing on its identity, we have purposefully began with God’s purpose. Simply stated, the basic point in Job chapters 40 and 41 is that we should not question the Lord for he is not required to answer us since we are weak, ignorant, and secondary. He does, in fact, often graciously answer us as he did Job in the end, but we must not demand that he do so.
Moreover, in light of God’s greatness, we should not focus on human accomplishments, either personal or collective (Daniel 4:30). Rather, we should think about the greatness of the Creator and what he has made.

What was Behemoth?
This is a controversial topic and should not be the starting point. Yet, it is still important because the great animal's emotional impact on Job and us is linked to its identity. Whatever it was, it was gigantic and the greatest of all creatures (40:19) that Job knew. Since Job lived thousands of years ago, however, long before Moses in the time of Abraham, it is probable that Behemoth was alive then but now extinct. Therefore linking it to the largest animals alive today, such as the elephant or hippopotamus is probably incorrect.

Was Behemoth a dinosaur?
Many believer that Behemoth was the greatest of all dinosaurs since such would have had a much greater emotional impact on Job than a relatively small hippopotamus or elephant. Moreover, it could not have been a hippopotamus because its tail was like a great cedar tree (40:17). In addition, the hippopotamus is not at home on dry land and in the mountains (40:20). As for the argument that the mouth of plant-eating dinosaurs not being large enough (40:23), such huge herbivores had small heads compared to their overall size, but their heads and mouths were definitely not small.
Whatever Behemoth was, it points to the Creator rather than to the godless theory of evolution. Therefore it makes no sense to begin with a belief in evolution over millions of years and assert that the greatest land animals that God made could not have coexisted with Job. Apparently it did, and what an impact it must have had! It should humble us as well.

What was Leviathan?
Though it is impossible to know for sure what this likely-now-extinct creature was, it is clear that it was important since God spoke of it at great length in chapter 41. None of the other animals in preceding chapters are mentioned in such great detail. Moreover, in addition to Job, others in the ancient world knew of this creature since it is mentioned in the Psalms and by Isaiah.

How is Leviathan regarded today?
Those who are in the habit of rejecting biblical truth often claim that Leviathan was just a mythical creature, but the animals in chapters 39 and 40 are obviously real, though it is unclear what Behemoth in 40:15-24 was. Most likely it was a large, now-extinct dinosaur, and this lends credence to the view that Leviathan also was a huge, now-extinct sea creature. Both were so large and powerful that only God could overpower them (40:19, 41:7-10). Moreover, their existence in the time of Job and Abraham is evidence for a young earth and against the theory of evolution.
As Pharaoh repeately rejected the Lord’s powerful messages to him in the ten plagues, each of which displayed God’s power in creation, so also proud disbelievers today reject Behemoth and Leviathan. Both are viewed as mythical creatures by those who in their pride regard creation as a myth. Moreover, sadly, not a few believers attempt to tone down the power of the greatest of God’s creatures by suggesting that they may have been a hippopotamus and a large shark. Both ot these approaches are disrespectful.

What was the Creator teaching Job?
It must have been humbling to think about the awesome power of Leviathan, since the Lord repeatedly compared its brute strength to the weakness of human beings. It was far too big for Job to catch with a hook (41;1-2) and far too powerful and well protected for anyone to successfully attach it with weapons (41:7-10, 26-29). Like Behemoth, Leviathan and its Creator were to be respected.

What is the application?
Though Job for the most part did not sin in what he said about his suffering (2:10), he was too bold in asking God to reveal himself and explain what had happened. Since it was foolhardy to attack Leviathan, it was also foolish to oppose God in any way (41:10) including by questioning his goodness or wisdom. Thankfully, Job took the powerful Leviathan object lesson about respect seriously and repented as seen in the next chapter (42:1-6). We should take it seriously as well.