Check out these many ways to Study God's VIP's

This great little booklet of 42 pages has several ranked lists on the people in the Bible, named and unnamed. As shown below, these can be used in many educational and fun ways. At first glance, this material seem to be just Bible trivia, but it is much more than that. The lists are actually courses in biblical literacy. Do we really know the Bible and the people in it? This booklet will show us ALL that we really do not, but it will also help us become more biblically literate and have fun doing so. 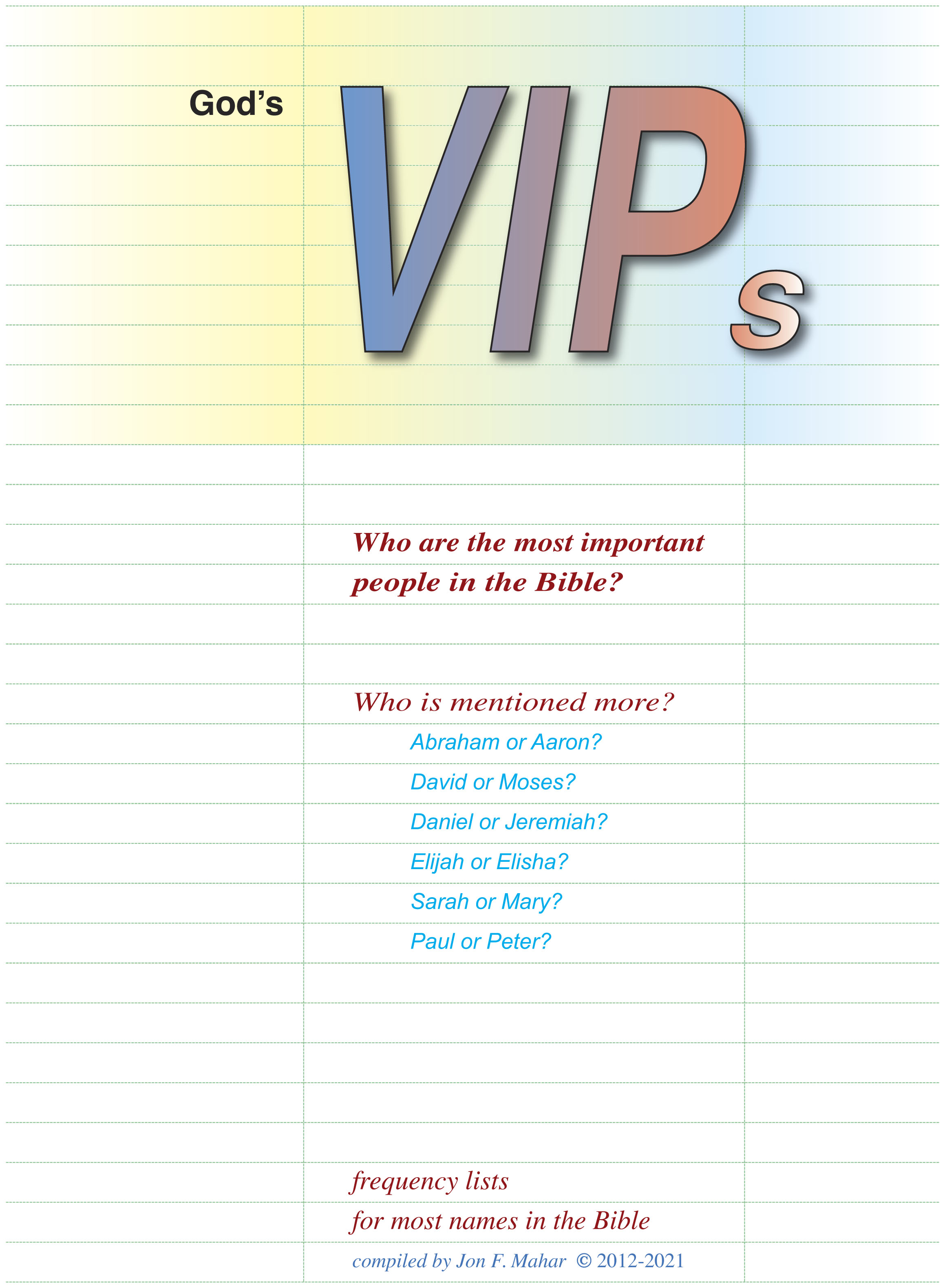 To view or print out the entire 42 page VIP Booklet just click on the cover photo above. To view or obtain the VIP's material a piece at a time use the various buttons further down the page.

For Introductions
The ranked lists are a treasure trove of facts for use as interesting first points or in opening questions for a message or group Bible study.

For Illustrations
Often it is difficult to quickly think of an appropriate biblical example, but the ranked lists with over 400 names are an easy to use set of quick reminders when searching for an example.

HOW MANY "A" PEOPLE IN THE BIBLE CAN YOU LIST?
Give yourself or the players / teams a few minutes to write out as many as you or they can. Abraham, Aaron, Adam, Ahab, etc. Who got the most? Did you remember Abigail and Apollos? Have fun and think through the Bible at the same time. One way to do this is to begin in Genesis and move on to other books and people such as those around Moses, David, Jesus in the Gospels, and Paul in Acts.

WHAT ABOUT BEGINNERS AND CHILDREN?
‍Beginners could be allowed to use a "baby names" website as a source and simply guess if various names are in the Bible or not. "No, Alice in Wonderland is not a book in the Bible!" Also, J names might be easier for beginners to list. If the group is made up of children, the teacher may make a list of A names, some of which are from the Bible but others that are not. The children can then try to pick out those that are biblical.

HOW ARE THE VARIOUS PEOPLE LISTED IMPORTANT?
‍After the initial competion to see who can list the most names, it is good to discuss who among the many people in the Bible with "A" names is most important. Abraham is the highest ranked at #7 and Aaron is #8. Many may be surprised that Adam is only ranked #53. So the question naturally becomes, "Why is there so much more about Abraham than Adam?" Another good question is about why Abigail (#95) is the top ranked woman in the Bible with a name that begins with A. (See First Samuel chapter 25.)

WHY ARE THESE GAMES IMPORTANT?
Listing and counting names may seem silly, but this game has a serious purpose! A large percentage of Christians do not really know the Bible, and some of them have been in church for years. This game is a fun and educational way to show many who play it that they need to do something about their biblical illiteracy. 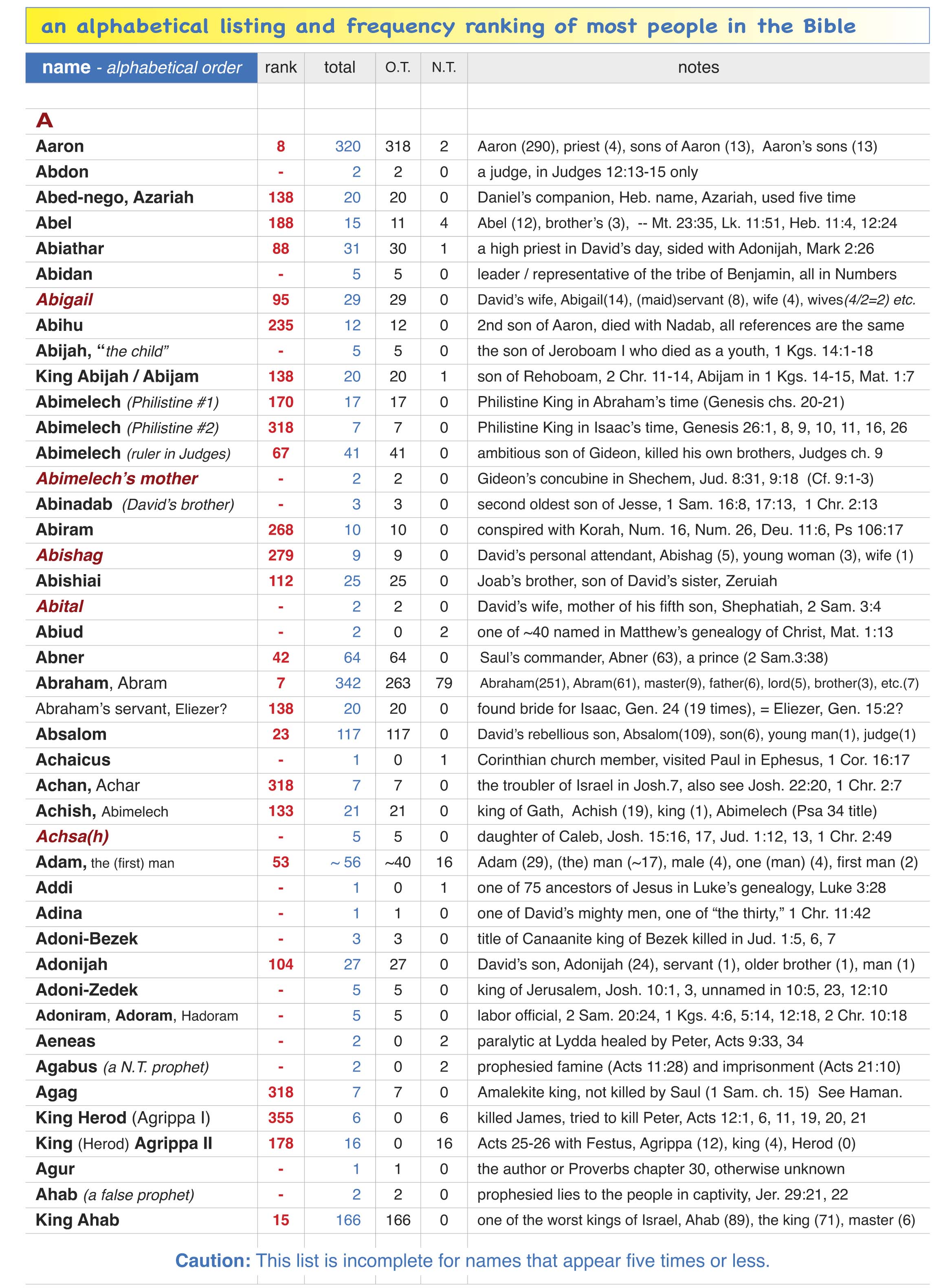 There are more than 365 individuals in the Bible who are mentioned six times or more. So you could study one a day for a year and never run out, but that is NOT the best way to use this great list. It can easily be broken down into shorter topical lists and learning by doing by doing so is far better than always being fed selected parts of the Bible by someone else. Make your own topical lists and think about those who are on it. If possible, do this as a group and discover many new things together.

COMPARATIVE RANKING GAME
A number of educational games can be played using this great list. One of the best is to simply compare and discuss the rankings of various Bible characters. In this game, individuals or teams take turns questioning others about which of two characters is ranked higher. For instance, "Who is mentioned more in the Bible King Ahab or Isaiah?" Many will probably incorrectly guess Isaiah, but evil King Ahab (#15) is actually ranked much higher than Isaiah (#51). The detailed data on the list shows that Isaiah is mentioned often in the New Testament but Ahab is not. Which of them then is truly more important? Legitimate arguments can be made for each.

TOP 100 GAME
In this game, individuals or teams take turns questioning others on whether particular Bible characters are in the top 100 or not. For instance, one might ask, "Is Eli mentioned enough in the Bible to be ranked in the Top 100?" If those being questioned do not know who Eli is, the questioner should give some basic information such as Eli having been a high priest that is found in First Samuel. Many will probably wrongly guess that Eli is not in the Top 55, because he is not nearly as famous as serveral others in Samuel. Yet, Eli is ranked #71 and is more important than many realize. The reason for this should then be discussed by referring to First Samuel chapters two through four. -- If there are many beginners in the group, teams should be formed. 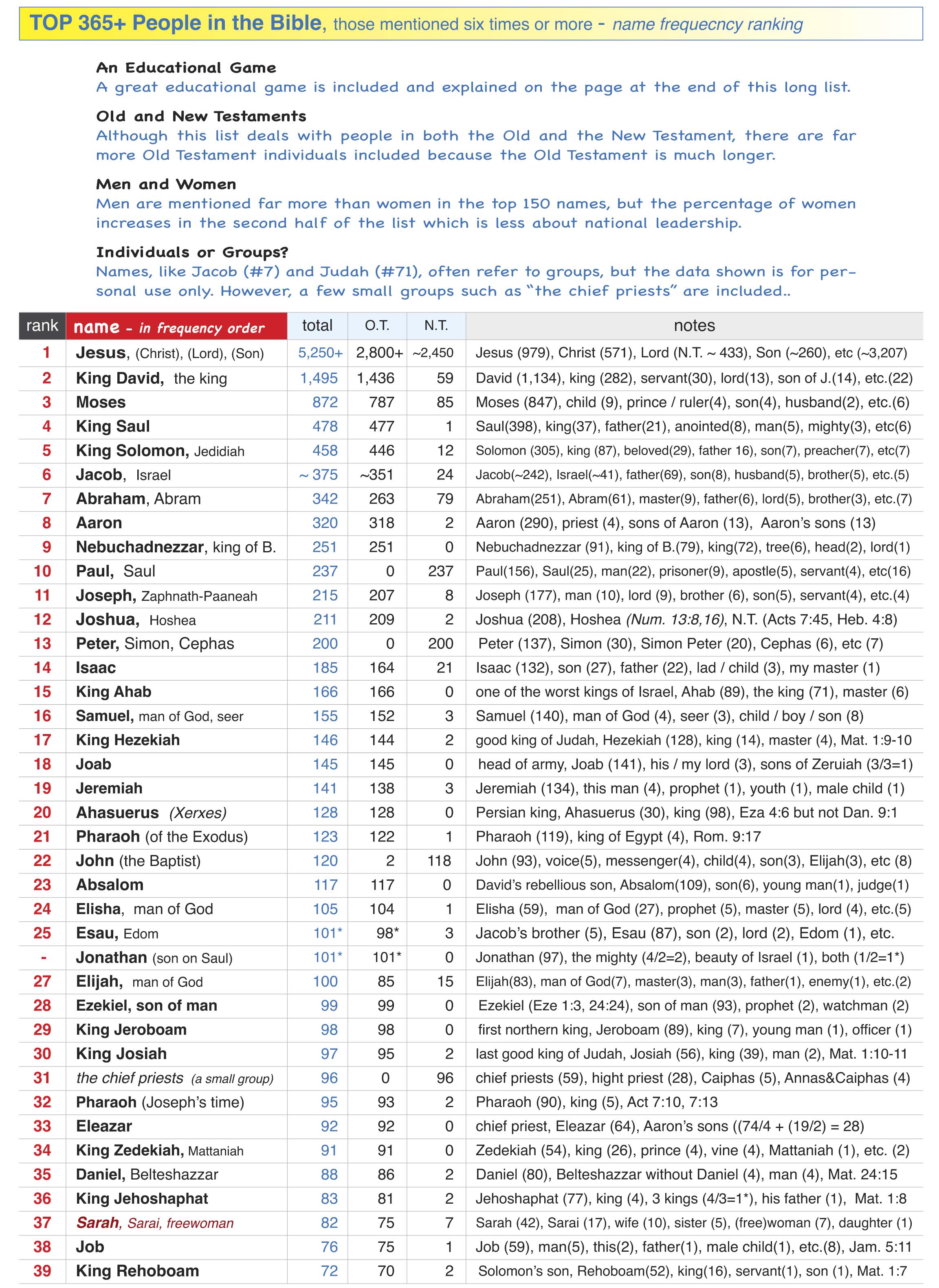 THE TOP 55 PEOPLE IN THE BIBLE LIST
is included in the 42 page VIP Booklet, but users should check out the detailed Top 55 Page since there are links to far more Top 55 material, including SEVERAL GAMES, A SET OF CARDS, and A BOOKLET. 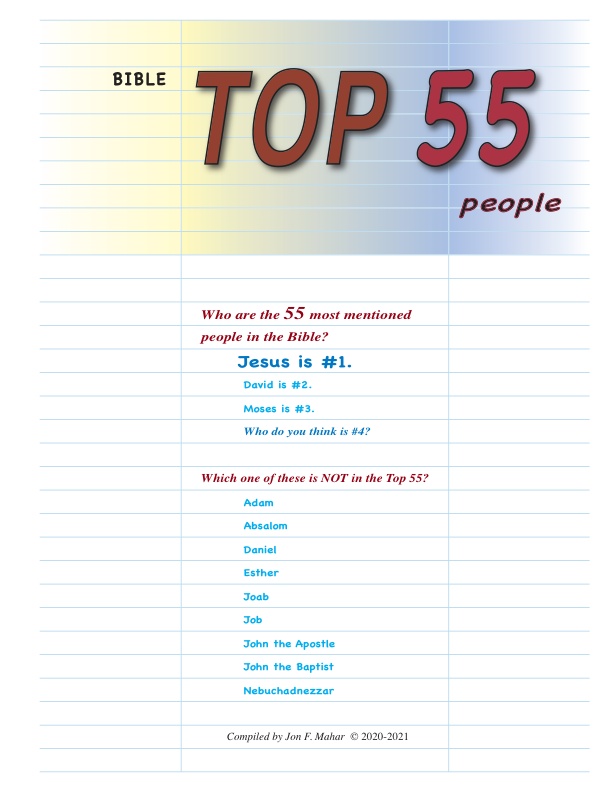 QUIZZING
Using the Top 60 Women in the Bible list, it is fun to ask questions like the following and earn points for correct answers. Who is mentioned more in the Bible Ruth (#8) or Rehab (#41)? How about Leah (#7) and Rachel (#3) or Delilah (#51) and Samson's wife (#38)? They are different people you know!

SURVEYING
The women on the Alphabetical List are shown with RED letters. So you can use it to find them quickly, but how many can you or your groups name and write down without looking them up?

This may seem trivial, but . . .
there is an urgent need for many in our evangelical churches to discover that they really do not know the Bible well. Often evangelism, attendance, worship, or preaching are stressed, but faithful Bible reading and biblical education are not.

Click here for the
FULL 18 pages of
top 60 women material
with 10 games, etc. 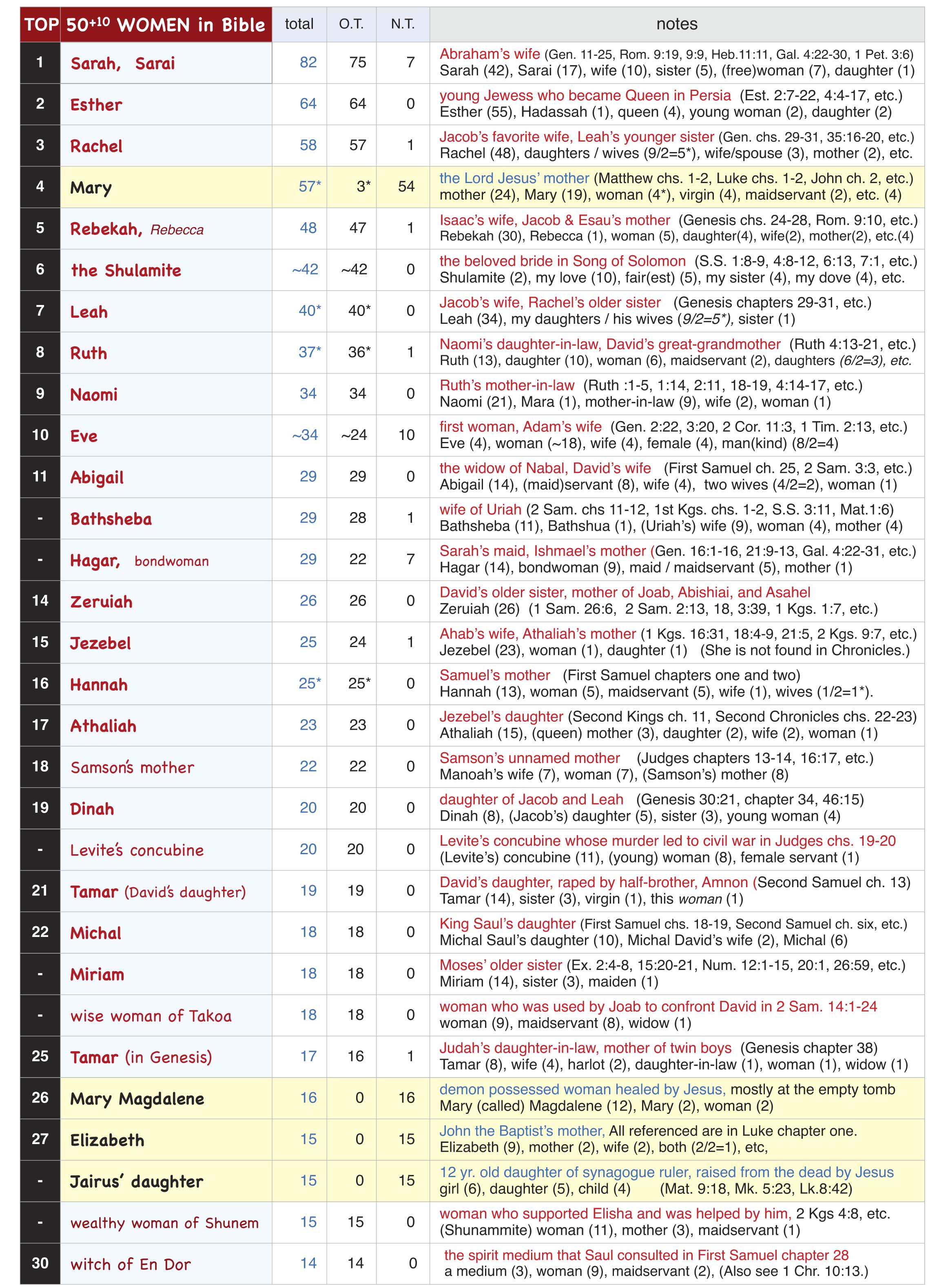 As God the Son and our Savior, Jesus is the Greatest of all VIP in the Bible. So he has many titles in the New Testament. Some of these are used much more than others, however, as this ranked list shows. 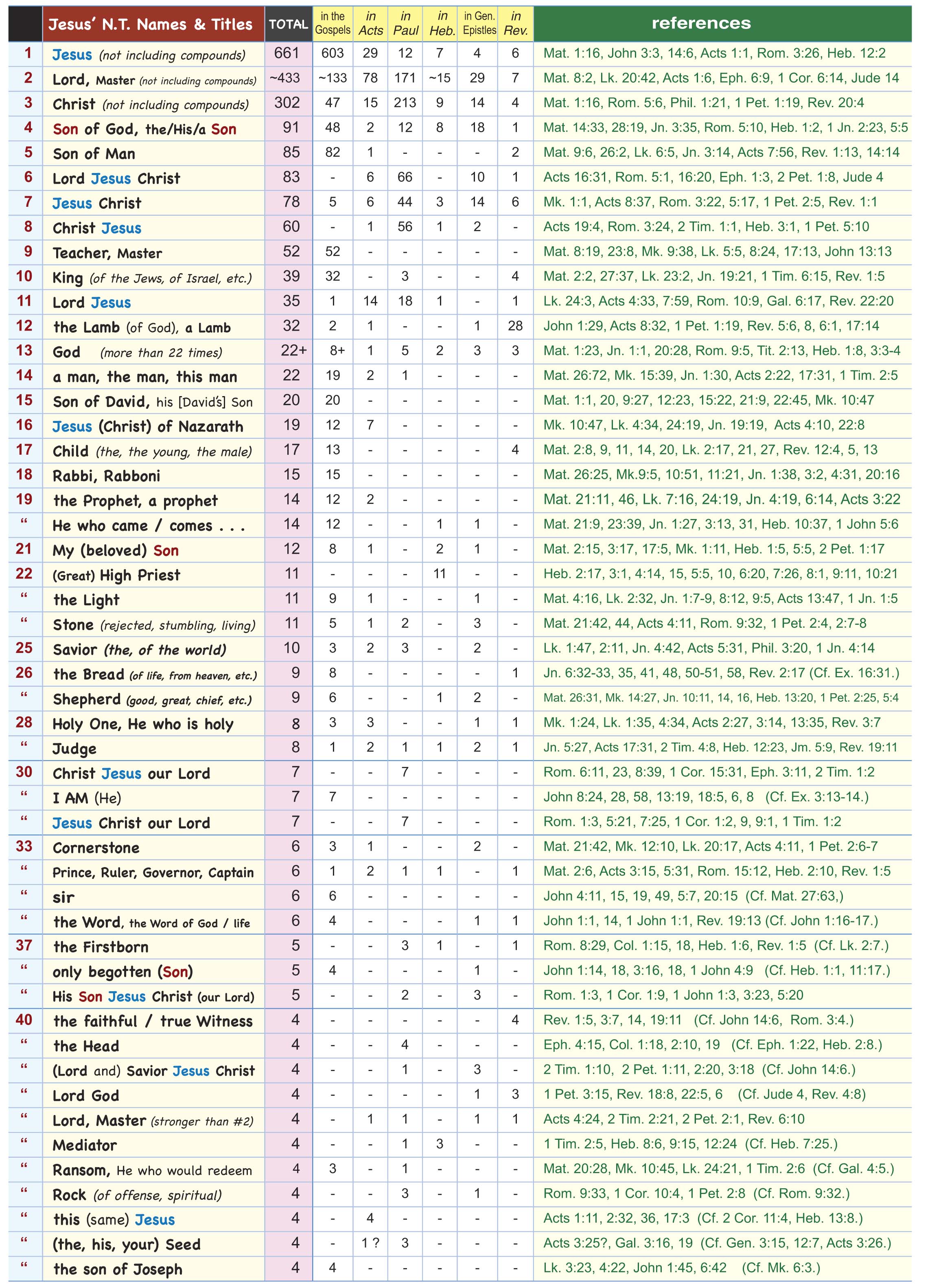 I WAS SURPRISED.
Individuals or teams are to give short reports on whatever they find surprising in the various lists in the booklet. This can be done as simple sharing or as competition with a judge awarding points. The session leader may wish to assign a particular list to be used in each round.

Example #1
For instance, the leader might instruct the group to look of unexpected things using the alphabetical list of people in the Bible. --- In response, someone might say, "I was surprised to notice that there are only three people listed whose names begin with the letter F. Apparently all three were Romans. There was nothing surprising about finding Felix and Fetus, but I had never heard of Forunatus before. After reading 1 Cor. 16:17-18, I looked him up online. Apparently his name meant 'fortunate.' Rather than just lucky, however, he was faithful and trustworthy regarding money and a spiritual blessing. As a group, he and his two travel companions, were a blessing to Paul. Many others in Corinth who were not as faithful and unselfish undoubtedly were not!"

Example #2
Alternatively the leader might instruct the group to look for unexpected things using the Top Women in the Bible list. --- In response, someone might say, "I was surprised to notice that Samson's wife who is mentioned 12 times is not the same as Delilah who is mentioned seven times. After reading Judges chapters 14 through 16, I understood the difference. Samson did not marry Delilah, but there was an official engagement and wedding with the other woman even though the marriage never became a reality. --- Another member or group might say, "I was surprised to notice that the Shulamite (bride) in Song of Solomon is the sixth most mentioned woman in the Bible. We don't even know her name, but she is ranked highly because of all the many loving ways the bridegroom (Solomon) addressed her. I guess this shows how important love is."