Check out these three ways to study Elisha.

Elisha is ranked #24 on the Bible Top 55 list, slightly ahead of Elijah (#27) whom he succeeded. Elijah is better known because he is mentioned 15 times in the New Testament (often in connection to John the Baptist) but Elisha is only in Lk. 4:27. Nevertheless, Elisha did twice as many miracles (2 Kgs. 2:9). Using the Top 55 cards and booklet it is easy to compare the two.

What happened and why?
The two female bears severely injured and / or killed 42 youth because they mocked the Lord and in order to demonstrate that Elisha truly was Elijah's successor. In this, the incident was the negative flip side of the positive healing of the waters in the previous verses (2 Kings. 2:19-22). This shocking passage is probably very short in order to indicate that this is NOT the primary way the Lord wants us to remember Elisha. The accounts of his positive miracles, such as the healing of Naaman, are longer. 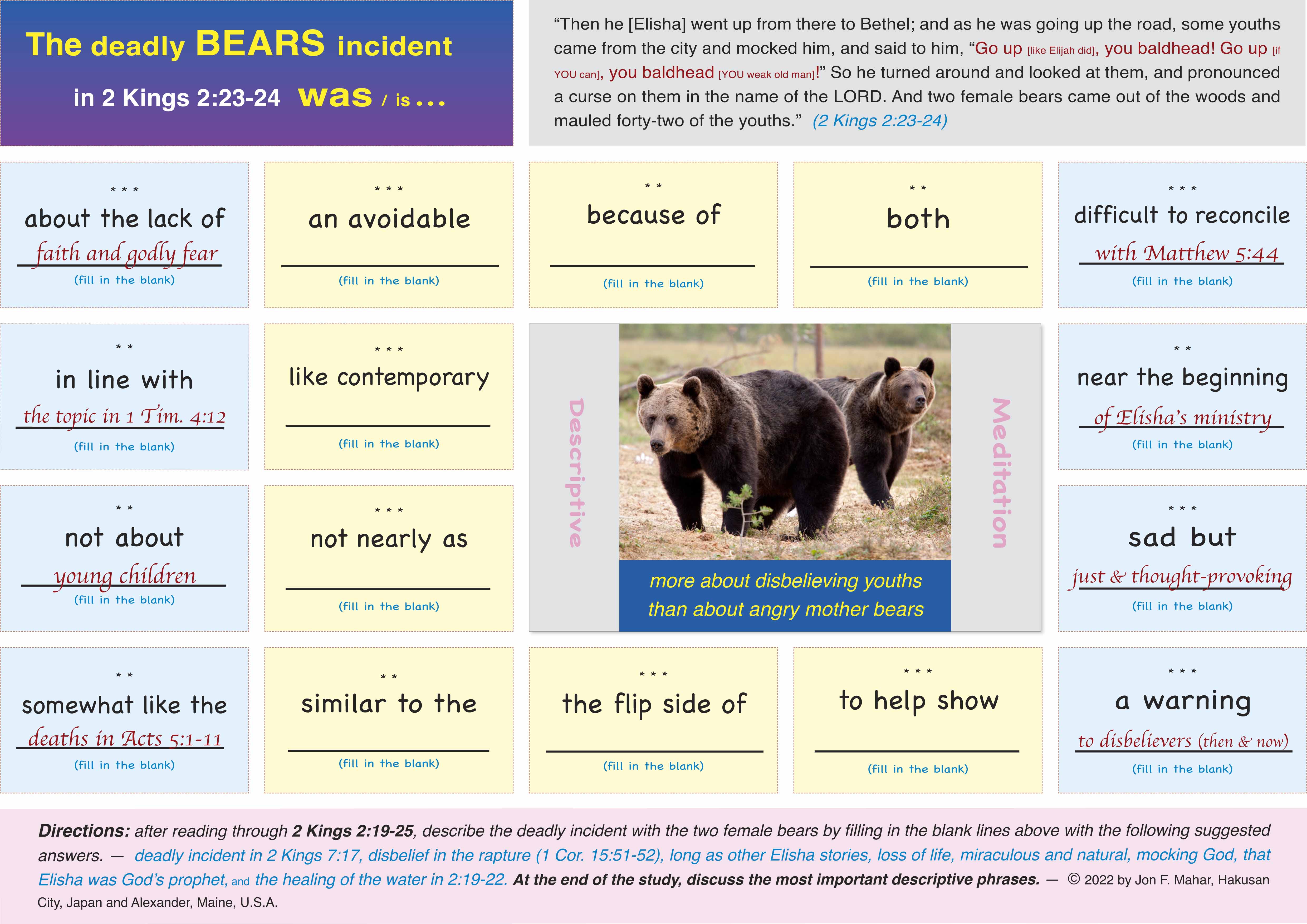 What was this incident like?
Several worksheet phrases link the two bears incident with others that are somewhat similar, including the judgment of Ananias and Sapphira in Acts 5:1-11. In both cases God was establishing his authority, first within Israel via Elisha and later within the early church via the apostles. So both passages come early in their respective books.
The irreverent youths showed their disbelief by challenging Elisha to go up to heaven like Elijah (2 Kings. 1:11), and this is much like those today who scoff at biblical teaching about the rapture (1 Cor. 15:51-51). So this passage was and is a warning to disbelievers both then and now.

How could two female bears have been in the same area since bears are solitary?
The loud shouting of the young men  probably got the attention of two sows each of whom had cubs to protect. Though male bears tend to travel widely, females often have somewhat overlapping ranges in the same general area. Undoubtedly these two bears knew each other, and perhaps one of them was even the mother of the other. Undoubtedly, their protective instinct was involved in what happened, though their unusual attack upon many people at once, while avoiding Elisha, must have been directed by the Lord in a special way.

What are the applications for believers today?
Obviously, we should treat God’s leaders and their teaching with respect. Moreover, in light of Matthew 5:44, we should not curse those who oppose us. However, the Lord’s gracious teaching in the Sermon on the Mount does not mean that those who oppose the gospel will be blessed by God in the end (2 Timothy 4:14-15). Judgment will still come in God’s time.

The study on Naaman and his servants in 2 Kgs. 5:9-15 naturally involved Elisha, although the main focus is not on the prophet. The greatest lesson to be learned from the servants may be the importance of having hope. Naaman’s pride briefly got in the way (5:11-12), but the servant’s questions quickly turned the focus back to “the prophet.” How much they believed in the Lord at first is debatable, but they at least had some hope in the man of God (Elisha) and acted accordingly.

The page attached below is the third one in this study, and it has many thought-provoking lines. As usual some of the worksheet lines are purposefully incorrect or only partly correct. Which ones? 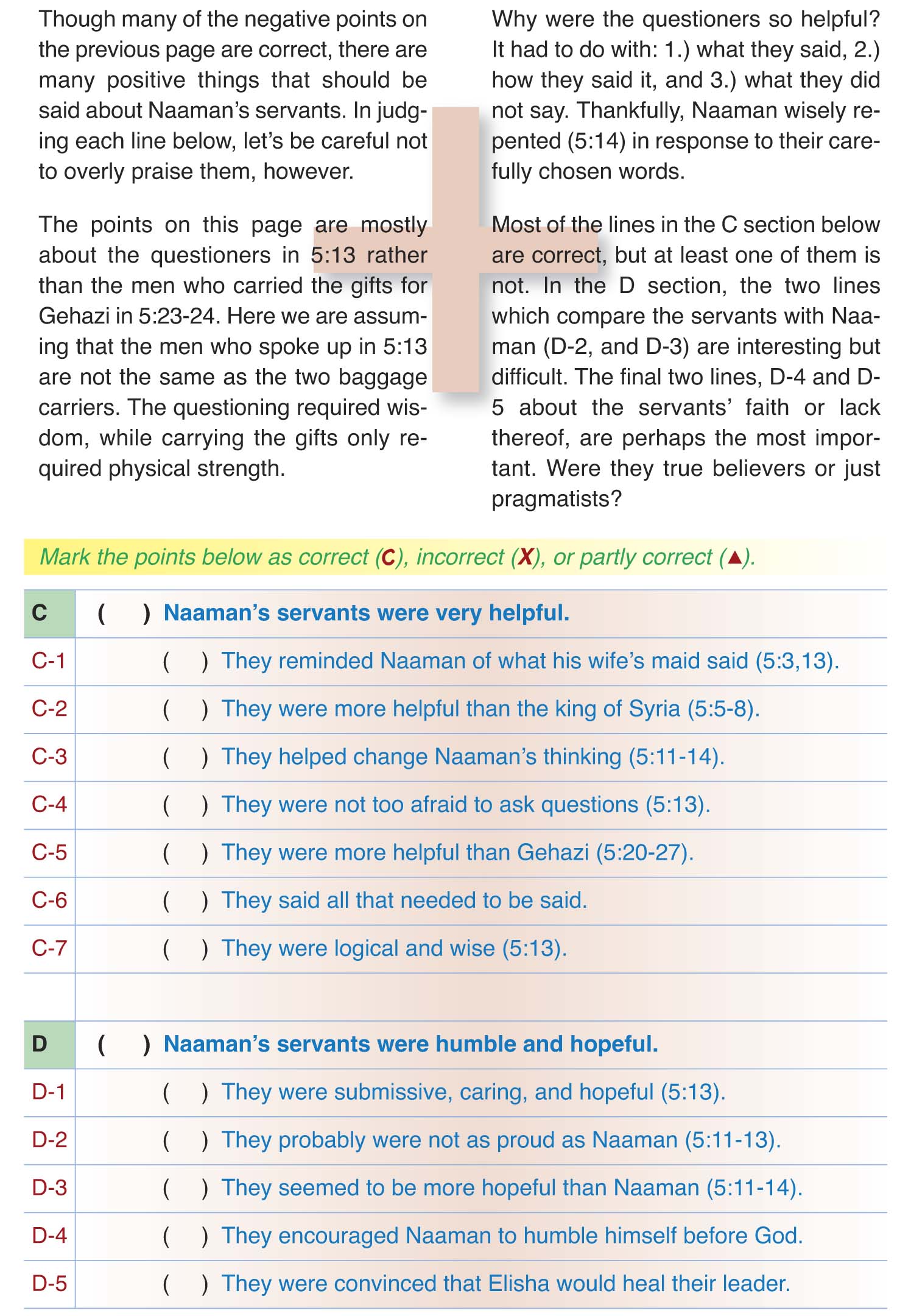 Gehazi's quick decision to chase after Naaman in order to receive a generous gift (2 Kings 5:20-27) is a classic example of bad decision making that was hastily done without seeking godly assurance. The worksheet below brings out various aspects of his decision by following the four-step I.D.E.A. study method. Like each study in the I.D.E.A. series, this is good to use in a counseling context as well as in various small-group settings. Practical applications are mentioned at the end. 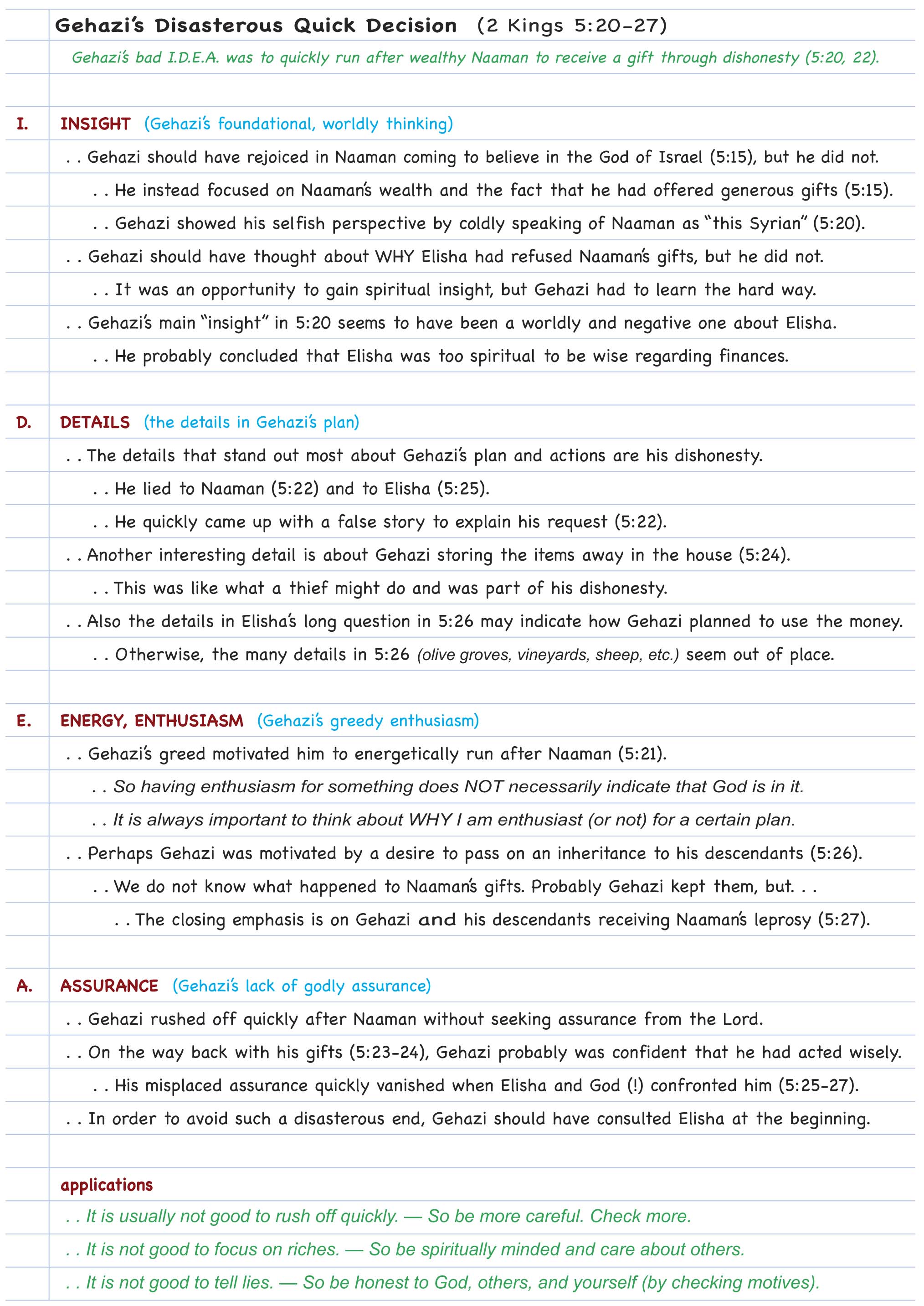 The story of the lost and recovered axe head in Second Kings chapter six is a good one to use with the Plus+ Bible study method. One reason is because the loss of a borrow axe head was a big negative in that day when iron was much more expensive than today. So it's recovery was a big plus as well. Thus, again we see the bigger the minus, the bigger the plus can be.

Today, we often belittle a problem by saying, "It's no big deal." This may even sound spiritual. Yet it can keep us from seeking God as we should. The man who lost the ax head spoke properly about the great loss. Let us be like him so that we may pray more. Instead of just counting our blessings it can also be good to count our problems as well IF it helps us pray more. (The psalmist / Jeremiah? seemed to do that in Psa. 119:81-88). 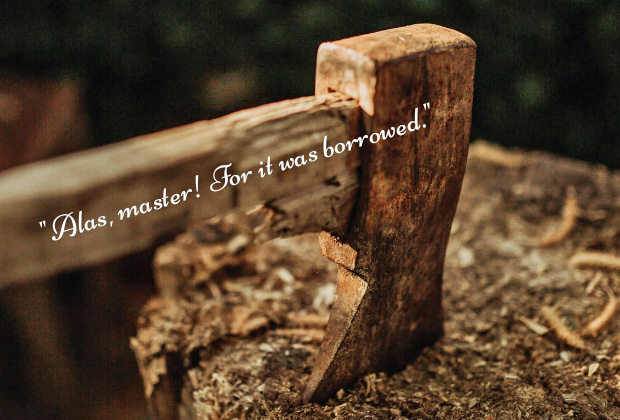 PLUS+ Bible StudiesElisha & the Axe Head

6. The Officer who was Trampled to Death -- Lesser-Known Leaders Study

The unbelief and death of the royal official who died in the gate (2 Kings 7:2, 19-20), helps bring out one of the main themes in the life and ministry of Elisha. We should believe in the Lord despite not being able to see how divine deliverance is even possible. The same point is made in 6:14-17 as well, in a more positive way, as Elisha prayed for the eyes of his servant to be opened to see the forces of heaven that surrounded the city.

The page below contains the second worksheet, which is focused on negatives since the officer who was trampled refused to believe without first seeing. This was in direct opposition to the point made about genuine faith in Hebrews 11:1. He was not a true believer in the God of Israel. 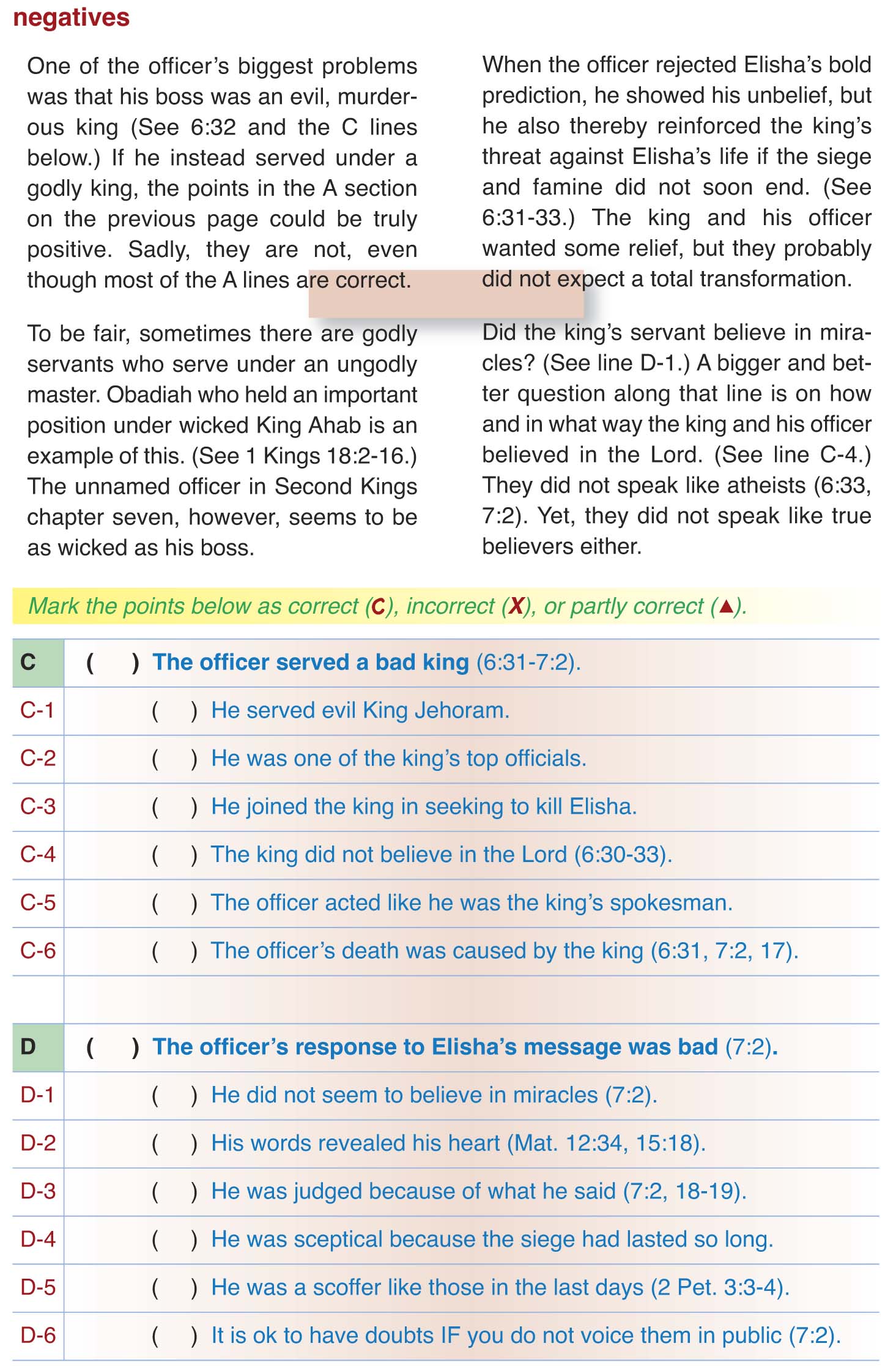 7. The Sons of the Prophets -- Lesser-Known Servants Study

This study on "the sons of the prophets" concludes by noting that more than just a strong message (like that of Elijah) was needed in order to draw the nation back to God. A discipleship program was needed as well. That is where Elisha's many helpers fit in. -- The page below is the concluding one from this study of Elijah and Elisha's disciples. 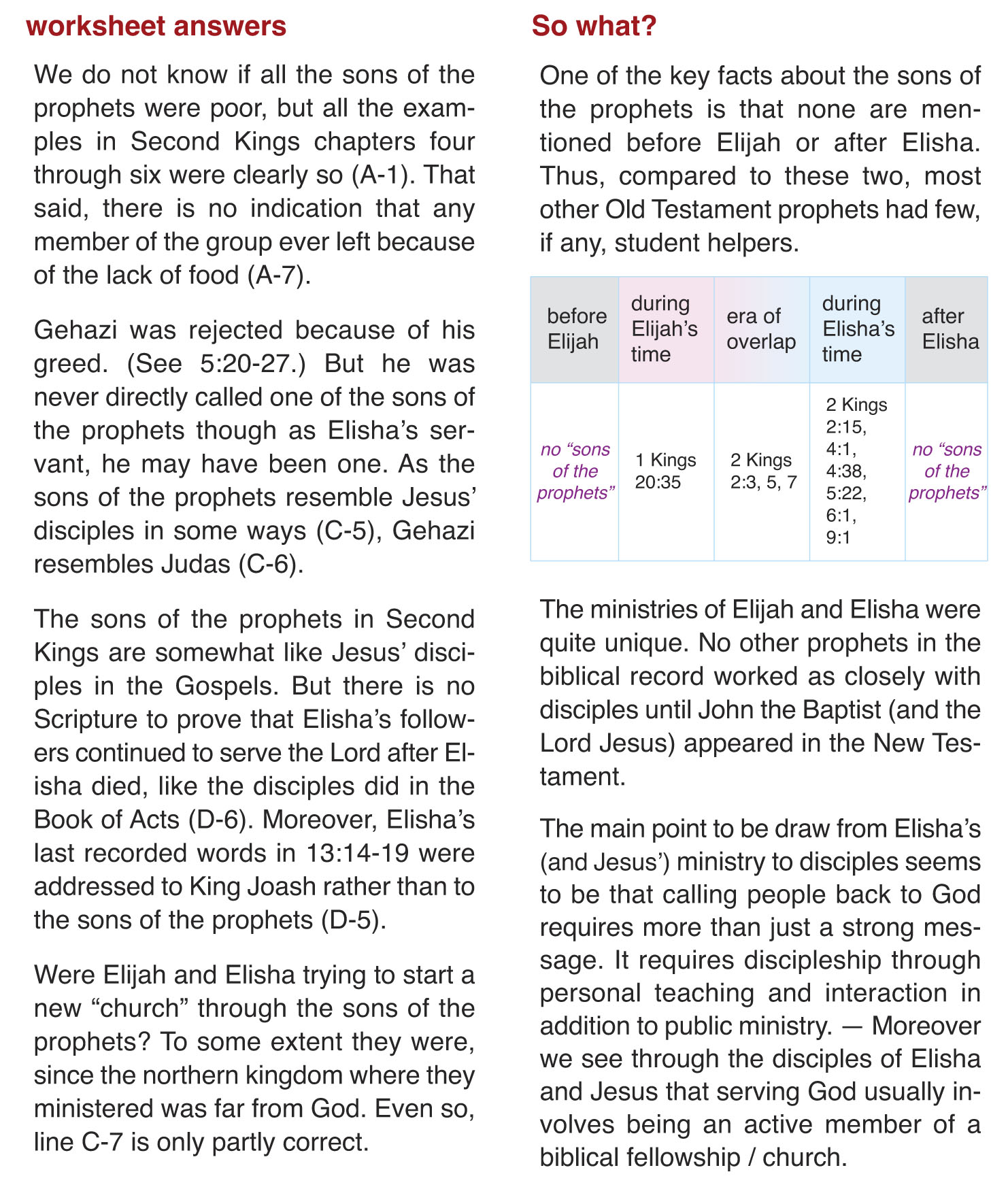 How would you describe the ministry of Elisha? Many of the 1,300+ Describe-It-Yourself cards and Fast-Scroll List items are appropriate, but the summary diagram below is concise and precise. After reading and thinking through the various chapters in First and Second Kings about Elisha, think about why the various points in this diagram are appropriate.

against idolatry
Elisha often aided the king of Israel militarily against neighboring pagan nations, such as in 3:9-25, 6:8-23, and 13:15-25, but this was not just Jewish nationalism. It was because of God's opposition to idolatry. (Notice that the Lord healed Naaman who was the Syrian military leader in chapter five and that many Syrian soldiers were spared in 6:18-23.) Moreover when Israel was involved in idolatry the help of God was often withheld. (Notice that Elisha is not mentioned in chapters ten through 12.)

with others
More personally, Elisha often interacted with and worked with the sons of the prophets and various individuals. He interacted with more people personally than Elijah and was rarely ever alone, unlike his predecessor. Therefore Elisha's ministry became multifaceted as he dealt with various special problems, from Jericho's water supply (2:19-22), to personal debt (4:1-7), to the death and raising of an only son (4:8-37), not to mention the healing of Naaman (5:1-19 and the recovery of a lost axe head (6:1-7). In it all, there was no problem too great for God to handle.

Probably the biggest and most painful interpersonal problem for Elisha came through Gehazi (5:20-27). Though the man of God was unselfish in his dealings with others, Gehazi was not.

8b. A God of Elisha Summary -- using Describe-It-Yourself Cards

How would you describe God's work through Elisha? This question puts the focus more on the Lord than on the prophet himself, but the points in the graphic below are, of course, related to those in the previous one above.

Elisha's ministry was "of God." So the Lord showed himself in a "powerful" and "protective" way. Moreover, since Elisha ministered "with others," the God of Elisha was "pastoral" or "personal" toward ordinary people and "political" in a militaristic way toward those who had authority.

At the most basic level, God was "propitious," favorable and gracious, toward Israel because of his covenant with Abraham, Isaac, and Jacob, despite their sinfulness. This is emphasized at the end of Elisha's life.

2 Kings 13:23
And the LORD was gracious unto them, and had compassion on them, and had respect unto them, because of his covenant with Abraham, Isaac, and Jacob, and would not destroy them, neither cast he them from his presence as yet.

Moreover, God's covenant with Israel and his patience and long-suffering toward them was based on the propitiation that came to them and us through the blood of Christ.

Romans 3:24-25
3:24 Being justified freely by his grace through the redemption that is in Christ Jesus: 3:25 Whom God set forth to be a propitiation through faith in his blood, to declare his righteousness for the remission of sins that are past, through the forbearance of God;

Therefore?
Once again, we see that the ministry of Elisha was related to the greater ministry of the Lord Jesus. So the bottom line for us like above in 7a is to not be like those who opposed or doubted the God of Israel and Elisha, whom we now know more personally through God the Son (Hebrews 1:1-2). 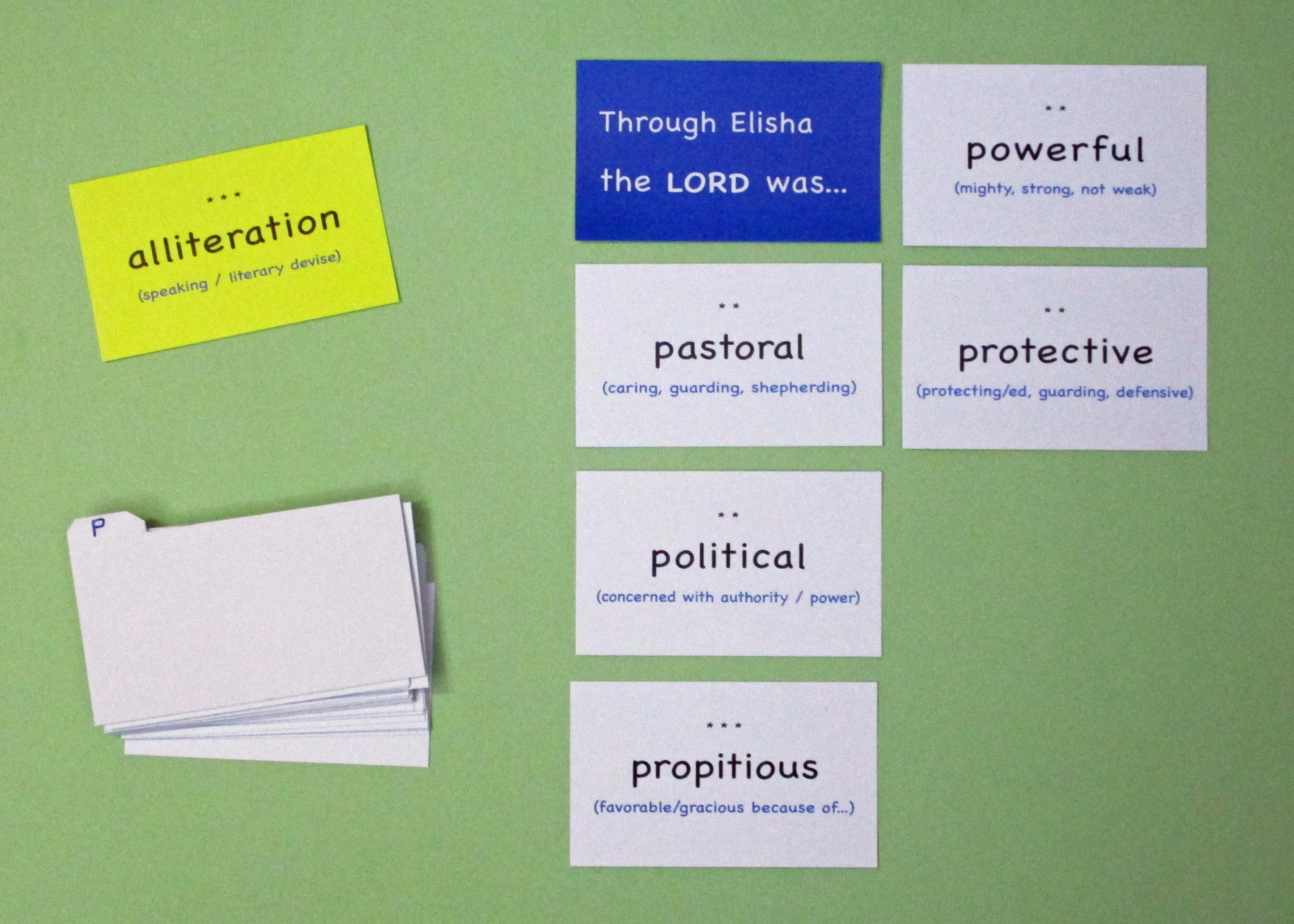 alliteration
The use of various terms that begin with "P" in this diagram is an example of alliteration. It is a helpful but imperfect device often used by preachers. Some terms above, such as "political" and "propitious" require explanation, and others like "personal" and "patient" could be added. Even so, thinking through the Describe-It-Yourself deck is a great help. Arranging cards in an orderly and distinctive shape can be as well. Did you notice the P-shape arrangement of the cards above? Perhaps you would arrange them differently or use different cards. Please give it a try.