Check out these great ways to study David.

David is ranked #2 on the Bible Top 55 list, second only to the Lord Jesus. So rather than simply studying WHAT is written about David, we should think about WHY there is so much about him. Of course, it is in part because the Messiah came through his line, but that is not the only reason. Another king, King Saul is also ranked very high at #4. Why? Perhaps it is to contrast him with David, but again there is more it than that. Going-deeper questions like these are often asked in the Top 55 booklet.

The cards and booklet in the Top 55 set can also be used to study the various kings on the list, such as by putting them into chronological order and divide them up into groups -- good kings / bad kings, Jewish kings / Gentile kings, etc. This can be fun as well as edifying.

THE BASICS
The charts below are a wonderful concise summary of the people in the life of David. For an explanation of the color coding and layout, click the CODE button below. For a concise introduction to each person mentioned click the LIST button. To print out a copy of the summary chart click the CHART button. Copies are available in English and Japanese. 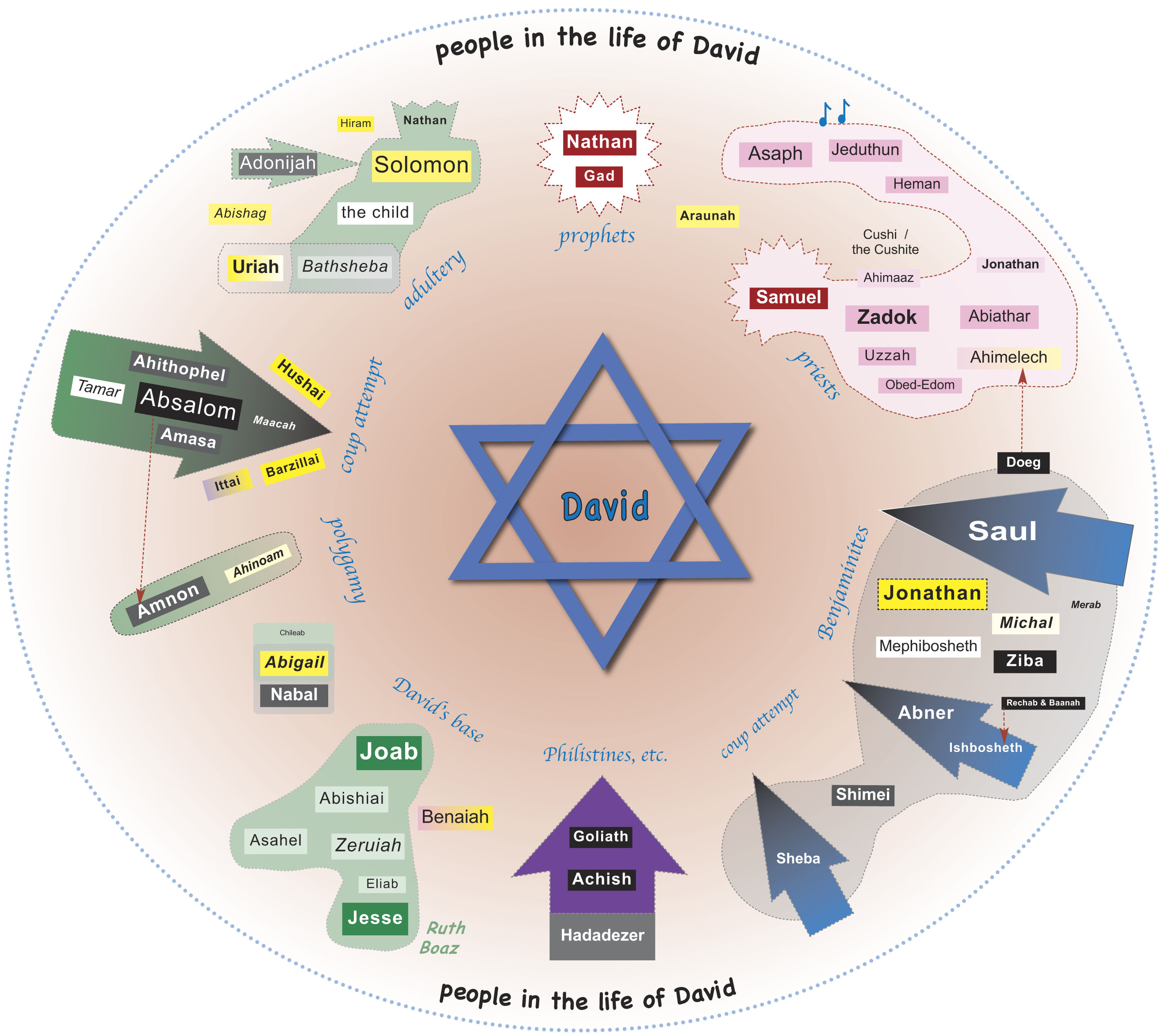 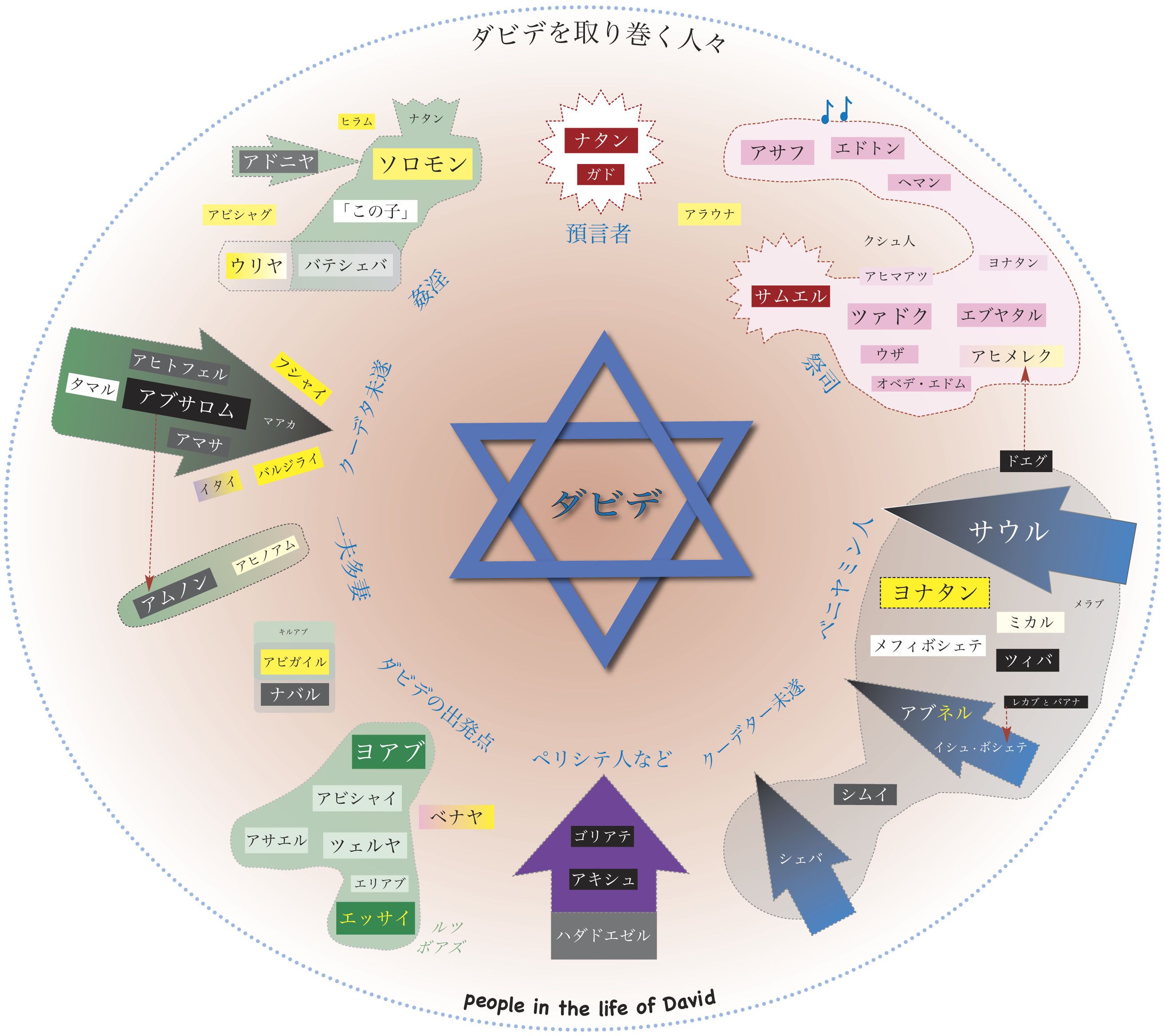 THE GAME BOARD
Game boards can easily be made by cutting along the dotted line which forms an oval shaped border on the People in the Life of David Chart (shown above) and glueing it to a piece of cardboard that has the same shape and size.

IDENTITY FOCUS
Players or teams take turns randomly pointing to an area around the outside edge of the board where the names other than David's are found. If the player or team can identify the person who is closest to their finger they earn a point. For instance, if it is closest to Joab, he should be identified as the head of David's army.
. . . Various alternative approaches can also be used. For instance, the player or team doing the pointing could be allowed to speak about several of the people near where the finger is placed. Another option would be to make the game totally "open book." The Tyndall House Publishers "Who's Who in the Bible" would be good to use along with the list provided above and the Bible itself.

COMPARATIVE FOCUS
Again, players or teams take turns randomly pointing to an area around the edge of the board, but the identity of the person or person being discussed is not the main topic. Rather, the person or person pointed to is to be compared and/or contrasted with someone else. For instance, if Saul is randomly selected, he could profitably be compared to David, Absalom, Jonathan, or even King Ahab who came later in Israel's history. Points should be rewarded in line with the quality of the comparison / contrast.

FOR SMALL GROUP STUDIES
Each of the 21 studies has a cover page with the summary chart, a page of basic introduction, an easy-to-use worksheet for lively discussions, and a final page with worksheet answers, conclusions, and applications. The descriptive format is similar to the PLUS Bible Study method, in which the negatives and positives in each person's life are the main focus. All 21 studies are available in English and Japanese. 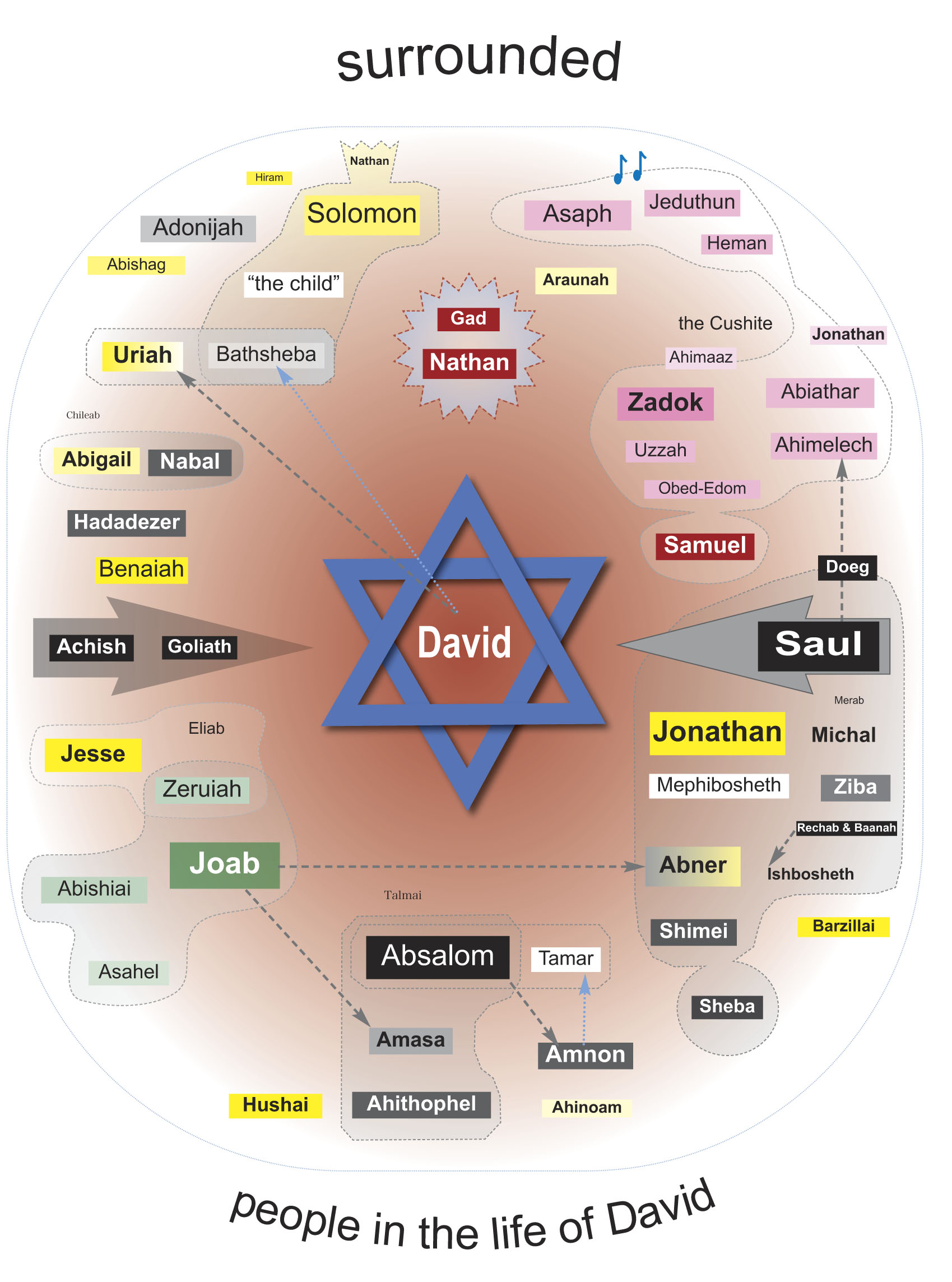 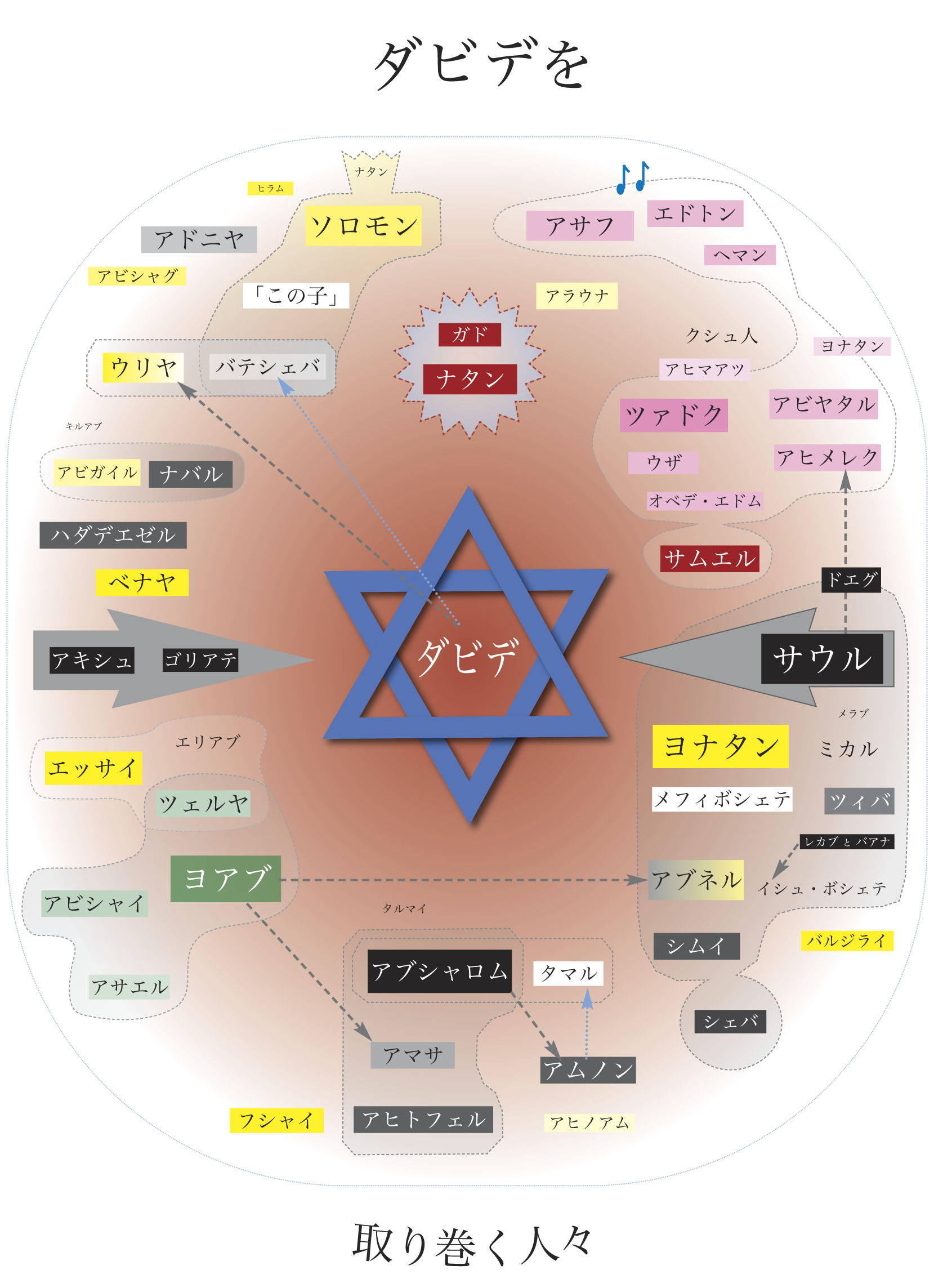 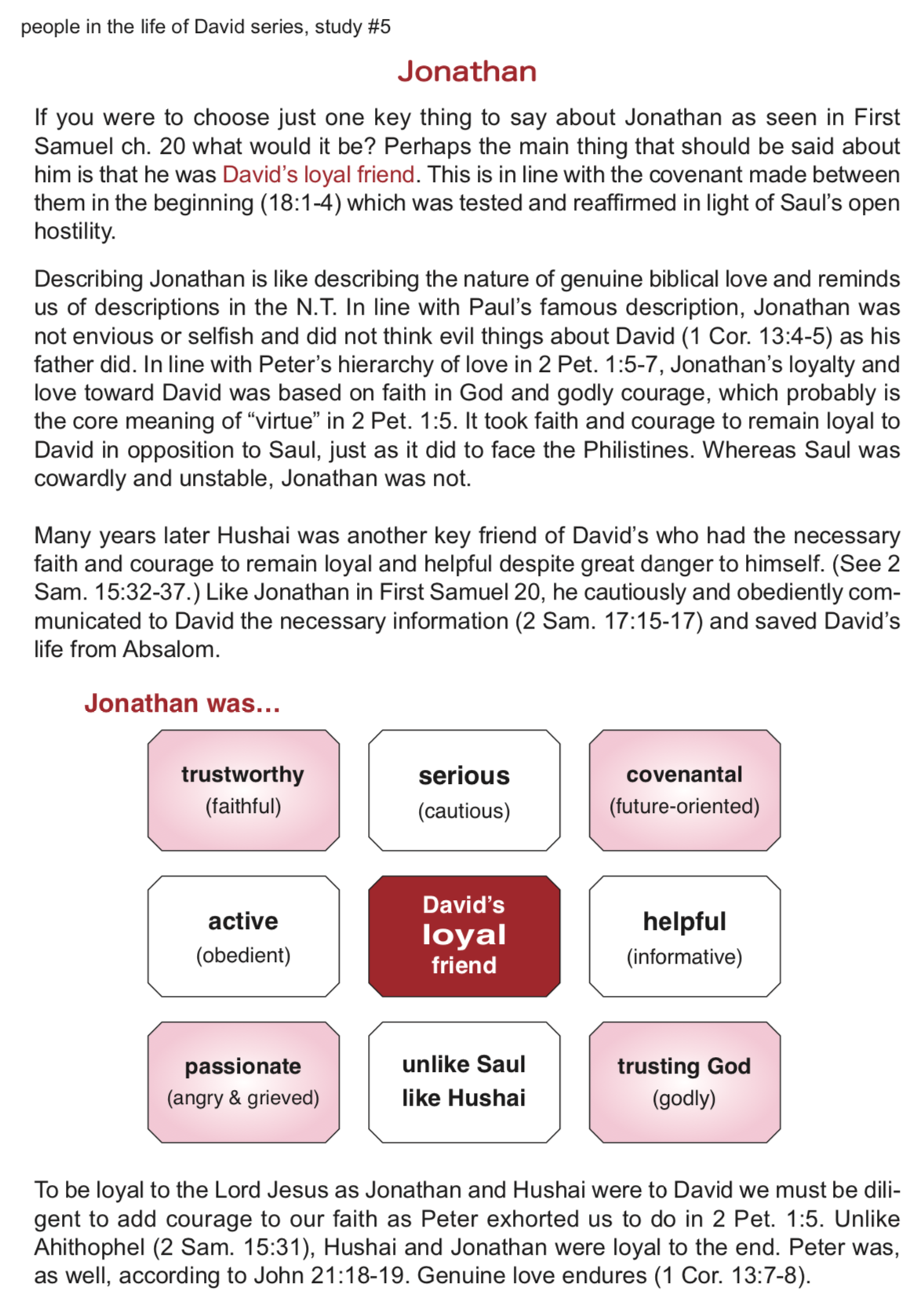 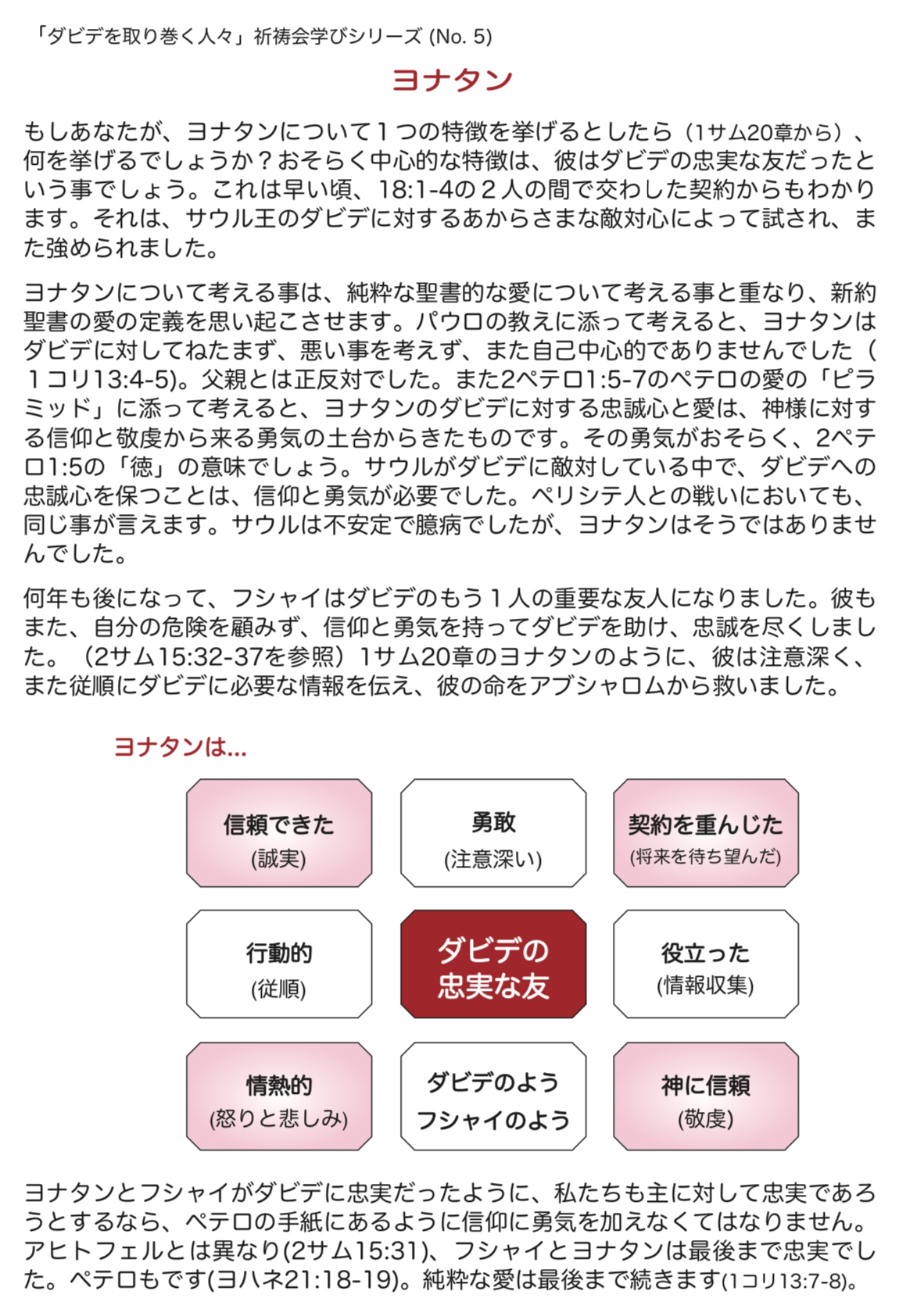 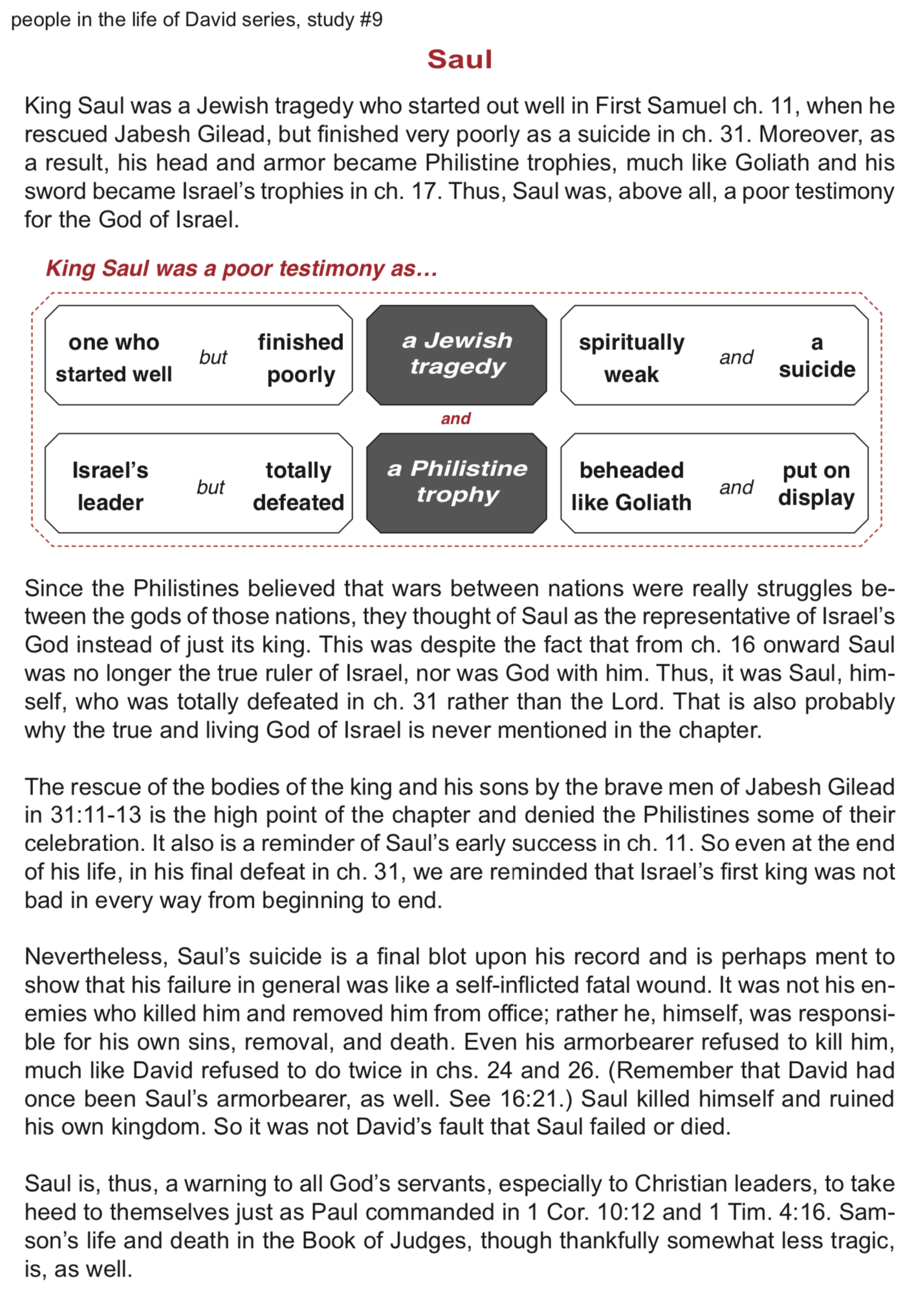 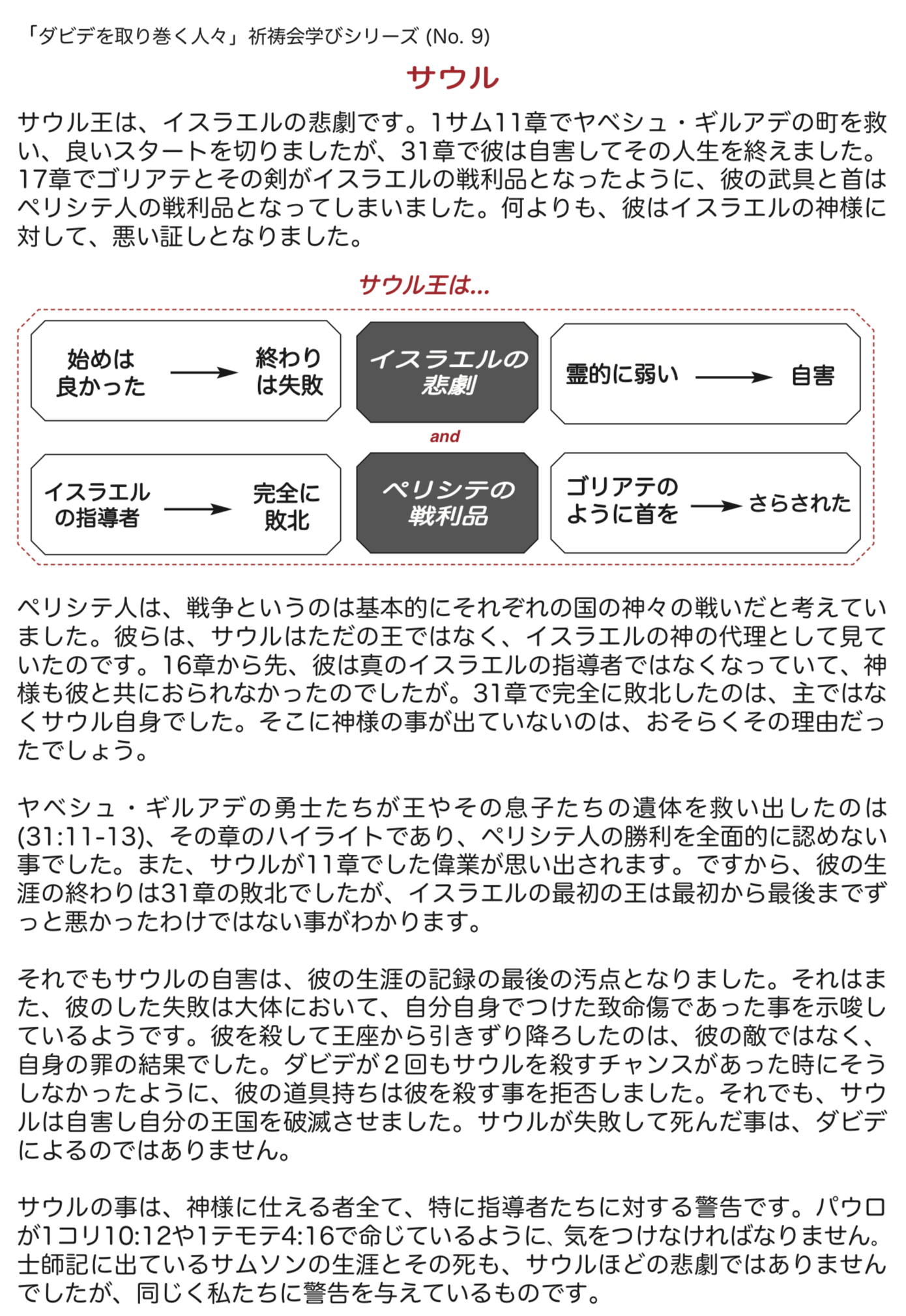 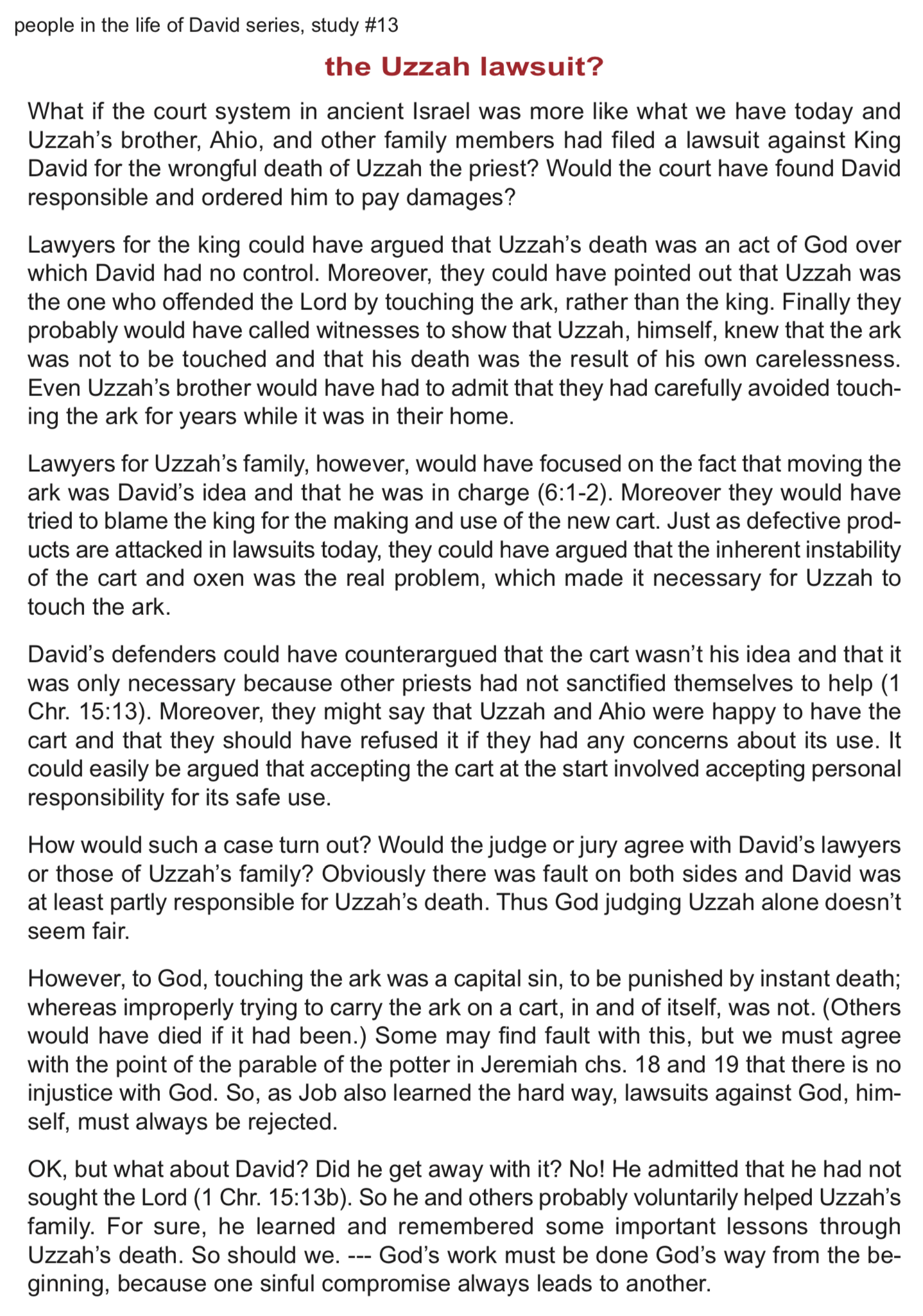 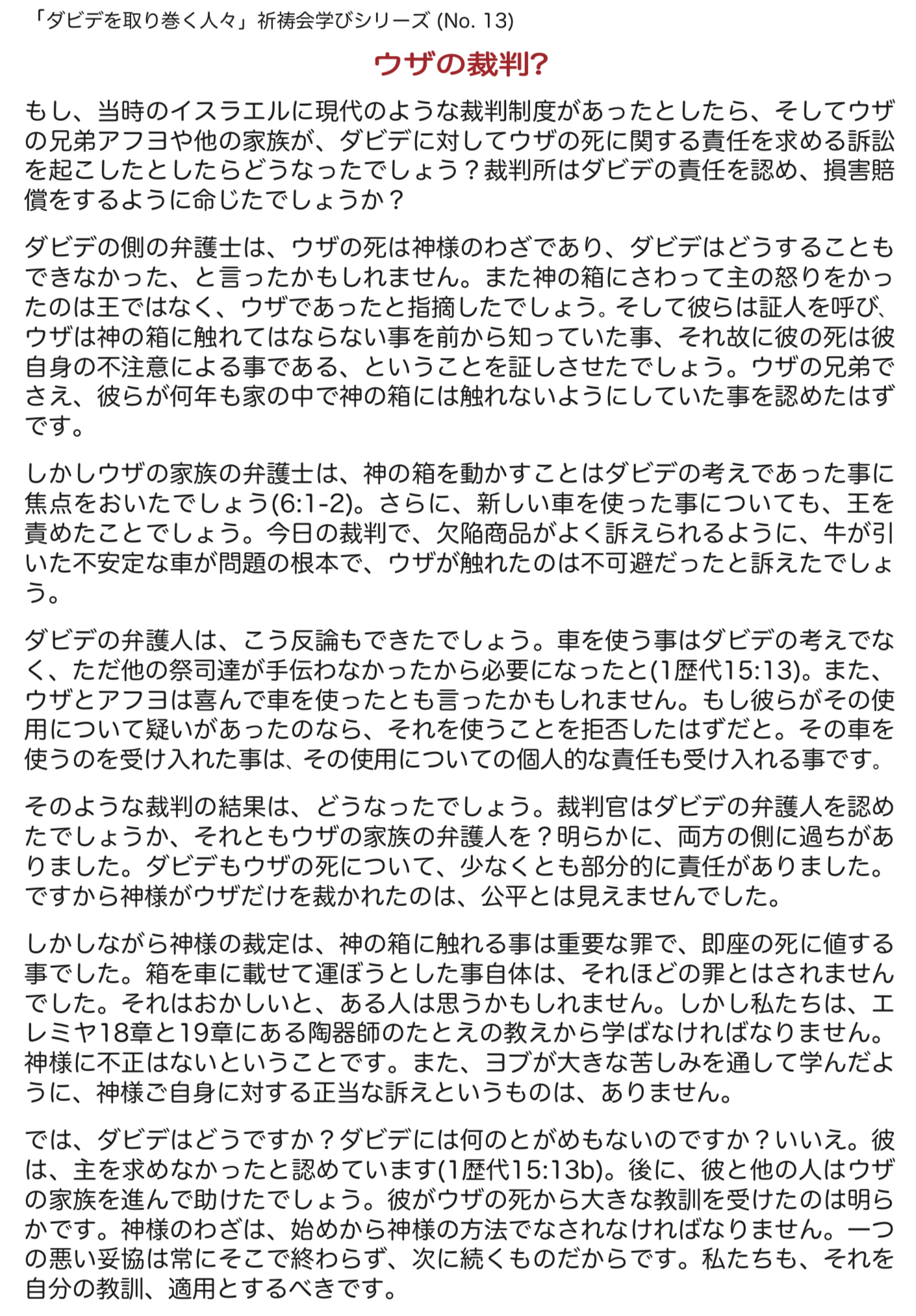 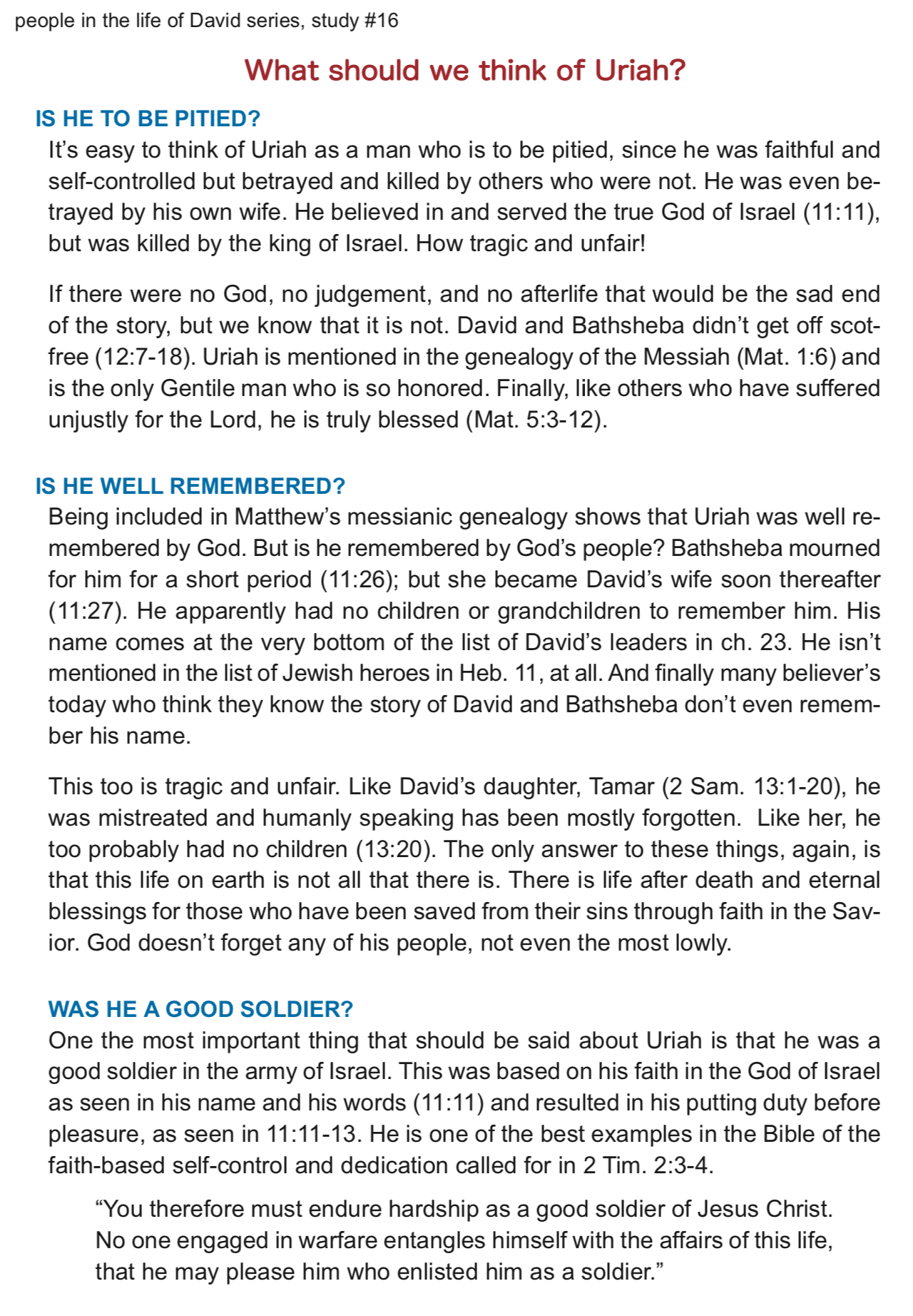 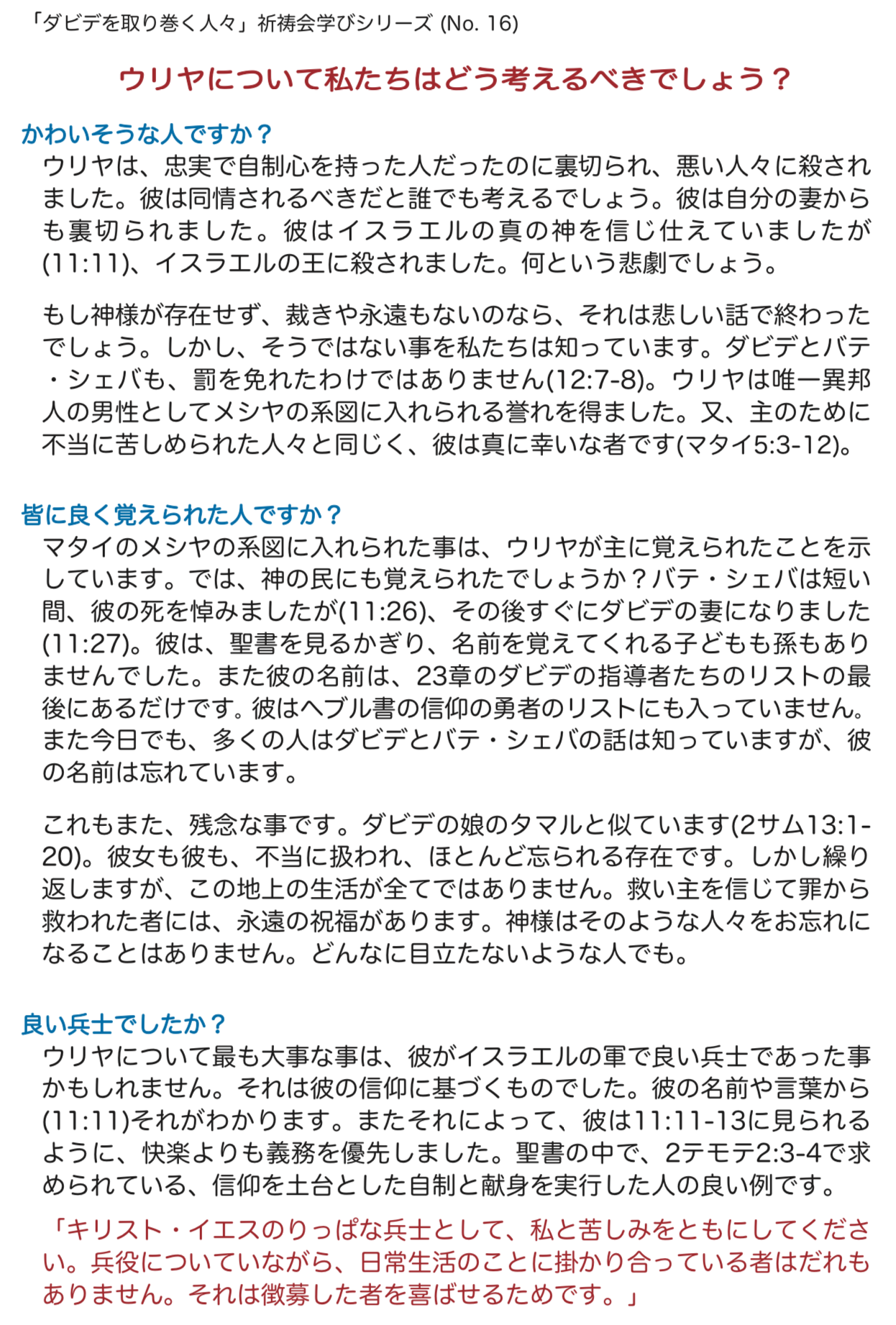 This study on the well-known story in First Samuel chapter 17 is like no other that you have ever done and a good example of the PLUS Bible Study method. After considering the various negatives and positives in the passage, the final questions are about what was the worst and best things in the chapter. These bottom-line questions naturally lead to fitting applications. -- Trust God and be brave like David was and don't be fearful like the people and King Saul. -- The conclusion is simple, but the PLUS method allows those in the study to discover it for themselves. This is a great study and an even greater study method.

PLUS+ Bible StudiesDavid and Goliath

How would you describe Abigail?
She was not David's first wife, but she was probably the best woman in his life, aside perhaps from his mother who is rarely mentioned. Although Abigail is, for the most part, only in one chapter (First Samuel chapter 25), that chapter is long. Probably that is in order to highlight her faith and practical wisdom. For sure she was a good and godly woman.
Suggestions for using the worksheet below and filling in the blank lines on it are at the bottom of the worksheet. Also many of the answers to the blank lines are made clear in these comments. 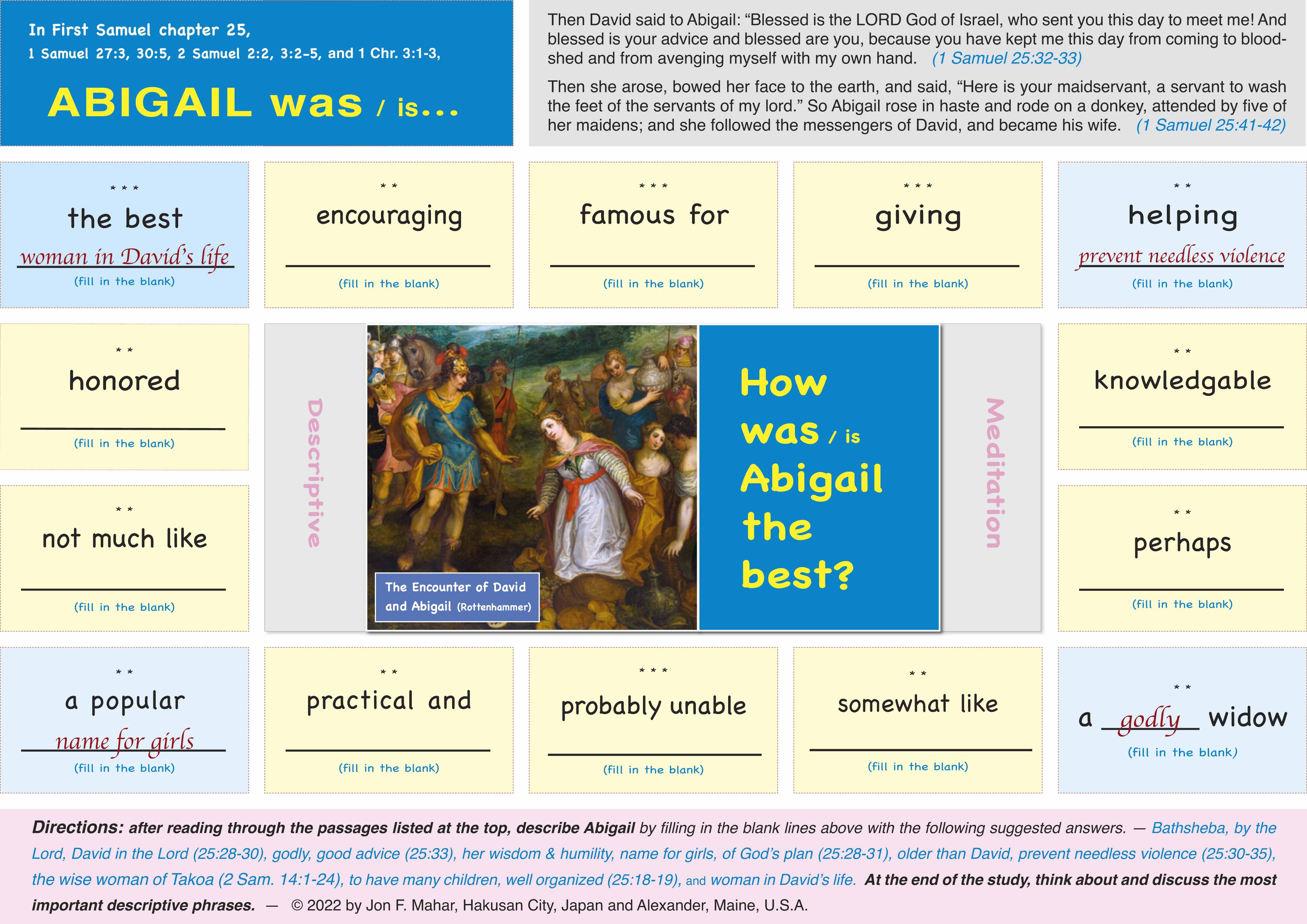 How old was Abigail when she met David?
We do not know, but this may be an important question nevertheless. Chapter 25 shows that she was respected by the men in Nabal's house. So she had probably been in the household for a number of years. Therefore she may even have been older than David. Moreover, importantly, she apparently did not have any children by Nabal during the years of her first marriage. So David did not seem to be concerned that she might be pregnant with Nabal's child when he proposed (25:39-41).

Abigail & Ahinoam
Abigail may have been considered barren, but the account does not directly say so because nothing negative was to be said about her. However, barrenness may explain why David quickly took another wife, Ahinoam (25:43). Though a son was eventually borne to David and Abigail (2 Sam. 3:2-5), the child apparently died in infancy, and as far as we can tell no other child of Abigail came along later.

Abigail & Bathsheba
In the minds of many, Abigail is overshadowed by Solomon's mother, Bathsheba. Yet, the ranking of these two women (tied at #11) is exactly the same. Moreover, beyond simple name counting, it is obvious why Abigail is a popular name for girls; whereas Bathsheba is not. Best of all, God himself honored Abigail by presenting her in detail and always in a positive light. She is famous for her wisdom and humility as well as for her faith and the way that she encouraged David in his faith (25:28-30). In the long-run, this was more important than being the mother of David's heir.

Preventing needless violence
The story of Abigail is also long in order to stress the value of human life and God's sovereignty regarding such. The Lord himself judged Nabal, and David was prevented from doing so. The same was true regarding the death of King Saul as well, as seen in chapter 26.

The summary chart of 2 Samuel 1:17-27 below has 15 selected Describe-It-Yourself cards showing that David's lament was nationalistic and personal. For a larger and printer-ready file simply click on the graphic.

After Saul died, it was important for David to show that he was sorrowful rather than joyful about Saul being killed. Yet, his lament was not written and promoted just for political effect. David had forgiven Saul. So he spoke generously about the good things that Saul had done for the nation militarily and economically (1:24). There were some good things to be said about Saul, just as there were about the actions of the jealous preachers who set themselves up as Paul's rivals (Phil. 1:15-18). If there is any virtue, courageous deeds of excellence, that is what we should think and talk about (Phil. 4:8). Saul was a failure in many ways, but he stood his ground at the end.

One of the most interesting, aspects of the passage is that God is never directly mentioned. Perhaps, this was because David wanted to guard against the idea that Saul's defeat was also the Lord being defeated by the Philistines (1:20).

The best description of David's lament will probably be the one you do yourself. There are many possible summaries. Here is alternative one with just nine Describe-It-Yourself cards. 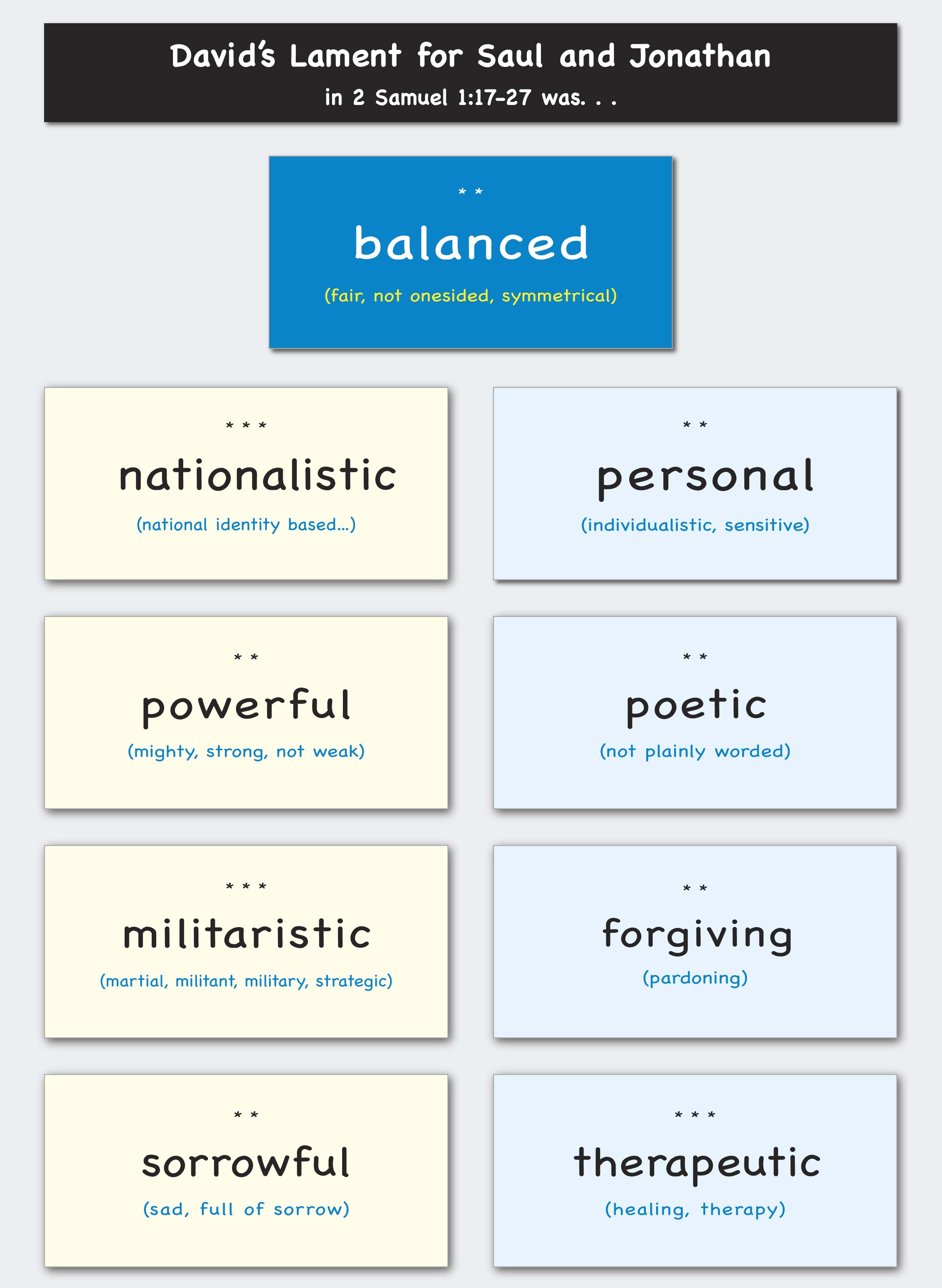 Let's Learn from the Negatives.
The long list below shows that David was far from perfect. Some of the negative points are more obviously sinful than others, but they all can be profitably discussed. The goal of this study is not to find fault with David, however. The main question is why the Scriptures, especially Samuel, shows so many negatives about him.

Are all the actions listed above really sinful?
Some may have simply been unwise. Dividing Mephibosheth's land with Ziba does not seem to have been the loving thing to do. Yet, it may have prevented future conflict between the two. We can not tell for sure. Some of David's inactions were also unwise and sinful.

Which of David's Sins Are Remembered Most?
Obviously, his adultery with Bathsheba and the murder of Uriah stand out, since the Lord's special protection was withdrawn from David from that point onward (2 Sam. 12:10-11). Nevertheless, these great sins were connected with those that preceded them as well as those that came after. Before David looked upon Bathsheba with lust, he had previously violated the command against multiplying wives (Deuteronomy 17:17), and long before he tried to deceive Uriah, he had deceived Ahimelech. One sin led to another.
. . . The counting of the fighting-age men of Israel is probably the second most memorable sin of David, since it is in the final chapter of Samuel and cost the lives of 70,000.

Why Are David's Sins Prominent in Samuel?
There are at least four reasons. First, we know much about David's shortcomings because we know more about him than about most other people in the Bible. Second, like the sins of others, including those of King Saul which stand out far more, those of David serve as a warning. Third, knowing about David's sins allow us to observe that he repented and was forgiven. Fourth, David shows that even good rulers fall short, and the world needs the righteous and just King of kings, the Lord Jesus. So when we look at David, we should look beyond him, thinking of the Messiah (2 Samuel 7:16, 23:5) who alone turns away the wrath of God. This is probably why Second Samuel ends with one of David's great failures AND a sacrifice (2 Samuel 24:24-25).

In addition, there is more about David's sins and failings in Samuel than in Chronicles in order to more clearly display human sinfulnessl. Saul's failures are also shown in greater detail in Samuel than in Chronicles. This may be because human sinfulness is a foundational truth. It is stressed early on in Genesis and Romans as well. In each of these books, this helps show the need for the Savior and the righteous King of kings.