Check out these three great studies in Amos.

We can learn a lot about the Book of Amos from the first two verses. Rather than boring everyone with a lot of historical background information that can easily be found elsewhere, however, how about a quiz?

Consider each of the 15 descriptive lines below and rank the strength of the evidence for each one in the first two verses, using a zero to five scale. Five would indicate that Amos 1:1-2 clearly shows that the point is correct, and zero would indicate that there is no evidence at all for the line in the passage.

Point #1
There is abundant evidence in 1:1-2 that the Lord is not silent or timid. So this line deserves a five.

Point #3
The earthquake in 1:1 helps show that the Lord is the God of all creation. So also does the ending of verse two. So line three should be given at least a three. There are many references to the Lord as the Creator in Amos.

Point #4
The roaring and the earthquake both indicate God's power. So this line probably calls for a four.

Point #6
Both Judah and Israel are mentioned in 1:1. Though Amos mostly ministered in the Northern Kingdom, he presented the Lord as the God of all the children of Israel. (See 3:1.) Line six calls for at least a four.

Point #7
Judah is mentioned before Israel in verse one, and the Lord roars from Zion and speaks from Jerusalem in verse two. So the southern kingdom is favored over the north in some ways. Yet, Mount Carmel which is mentioned in verse two is in the north. So line seven probably deserves about a three.

Point #8
For sure the Lord favored Jerusalem over Bethen since the latter was the main center of idol worship in the northern kingdom. (Notice how Bethel is prominent in 7:10 and 7:13.) That said, however, Bethel is not mentioned in Amos until 3:14. So line eight also should probably be ranked at about a three.

Point #9
There is no doubt that the Lord was angry at Israel because of idolatry and other sins. (See 2:6-8 and 3:12-15.) Yet this is not directly mentioned in chapter one. So line nine probably only deserves about a two. Amos spoke about the sins of other nations in 1:3 through 2:5 before coming to Israel in 2:6 and onward.

Point #10
Amos is shown to be God's spokesman in verse one. Yet he is not directly called a prophet. He was a sheep breeder. Line ten therefore may be ranked at less than five.

Point #11
The first two verses in Amos set the tone for most of the book, BUT we must read all nine chapters in order to know this for sure. Yet, since the first few verses in a book often set the tone, line #11 probably should be given a ranking of about three even though it is totally correct and important.

Point #12
This line is incorrect, because the Lord is NOT presented as angry or roaring in the last five verses of the book. So line #12 could be given a ranking of only one.

Point #14
Of course, the Lord is to be feared and obeyed. The earthquake, roaring, and other things in 1:2 show this. So line #14 should be given at least a four.

Point #15
The power and righteous anger of the Lord is clear in 1:1-2, however, his love is much less so. Nevertheless, the calling and sending of Amos, who had been a shepherd, is a sign of God's loving pastoral care. So line 15 probably deserves at least a two. (For more on God's love and care, see 3:7 and the next study below.)

Can two walk together, unless they are agreed? (Amos 3:3)

The obvious answer to this famous rhetorical question is "no." Unless two people have previously agreed to travel together, they will not be found doing so later. There has to have been a mutual agreement, unless one believes in mere chance which Amos did not. (See 3:6.)

Since this question is an opening line in a rather long sermon, there is more to it than is obvious at first. In chapters three through six, the Lord confronted the children of Israel for their willful rebellion against the One who had brought them out of Egypt (3:1-2).

The two walking together represent the Lord and the Jewish people. So the question in verse three and the two verses before it clearly show that ongoing fellowship was what God desired. Israel was family! Sadly, chapters three through six are mostly about judgment, however. Yet the opening question in 3:3 is caring as well as negative. If God had totally given up on his people, Amos would not have been called (See 3:7.) and the message would have begun with the lion roaring in verse four. So the dark message in these chapters can be viewed, at least in part, as a call for repentance much like in Jonah chapter three.

How would YOU describe this question?

The Describe-It-Yourself list portion shown below contains the first two of 15 pages of terms and descriptive phrases (144 in all) that should be considered. Some phrases have blank lines to be filled in as desired. All terms and phrases are thought provoking though some are incorrect and some are only partly appropriate.

Click on the cards / pages shown below to access the complete list. After reading through Amos chapter three, scroll through the D.I.Y. list and think about each suggested term and phrase in order to describe the question in Amos 3:3 for yourself.

Is the question in 3:3 about agreement? Yes. Is it basic? Yes, but it is also important. Is it closely connected to Amos 3:1-2. Yes. Is it difficult to understand? No, but it can be difficult to interpret. (For more on the controversy about the verse, see the next section below.)

Is Amos 3:3 a call for separation?

The prophet called for separation from idolatry in 4:1-5 and 5:4-8. However, the question in 3:3 is probably an expression of God's desire for reconciliation with himself. The tragic separation of Israel from God is the problem that the question addresses.

Amos 3:3 is often applied in a negative way to harmful associations with evil people such as false teachers. Various other Bible passages and books, such as Second Peter and Jude, call for this, but using Amos 3:3 to teach this kind of separation is problematic. Doing so overlooks two key facts. First, Amos was evangelizing Israel in chapter three. And second, verses one through three are a gracious and persuasive introduction to Amos' message. God did not want Israel to be separated from himself. Moreover, today, he does not want you as an individual to be separated from himself. So through Christ, he provided reconciliation.

The PLUS+ Bible study method is used in this study. So the first of two worksheet contains negative lines that are to be judged as correct, incorrect, or partly correct. The second worksheet which is shown below contains positive points which are to be judged the same way. The final page of the study has the worksheet answers and conclusions. This study is one of 20 in the Lesser-Known but Significant Servants series. For the complete study pdf click the link below the worksheet. 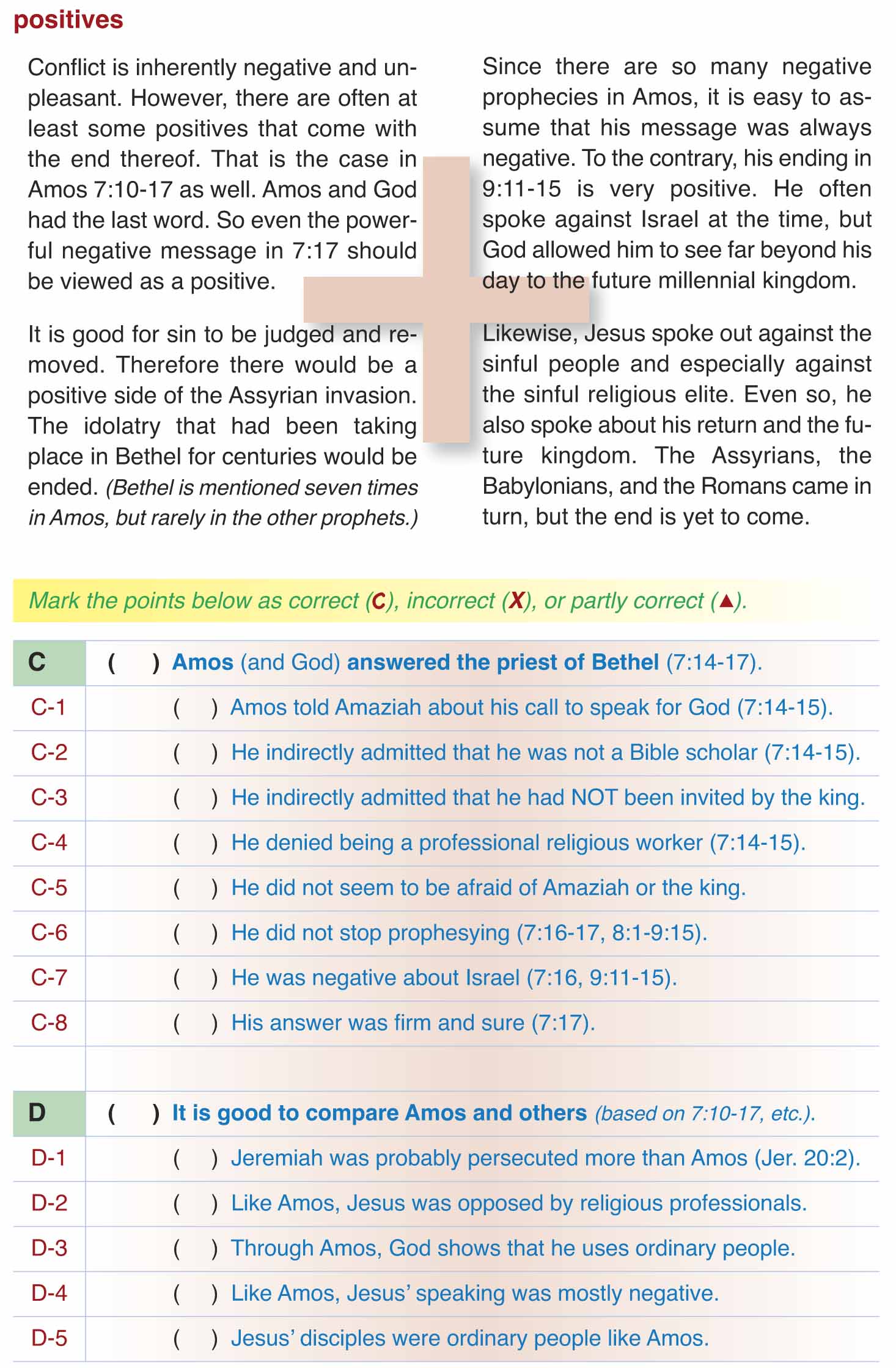 The simplest form of the PLUS+ Bible study method begins with the making of two contrasting lists of various negatives and positives. In a way, Amos' five closing verses are totally positive since they speak about the blessings that will come to the Jewish nation during the millennial kingdom, after the time of judgment and Gentile domination (Rom. 11:25) has ended. Yet, past trouble and futility are also spoken of in Amos' ending for the sake of contrast. The past and present negatives make the future positives all the more wonderful.

The next step in the PLUS+ Bible study method is to discuss which of the negatives is the worst and which of the positives is the best. The greatest minus here undoubtedly was the ruin that came to David's kingdom through its division into two kingdoms and its eventual loss through the Assyrian and Babylonian captivities. The greatest plus will therefore be its glorious restoration during the reign of the Son of David (9:11), Jesus, during the millennium. All the other great blessings in Amos' conclusion and in the conclusion of many other prophets will flow from this.

The final step in the PLUS+ Bible study method is to make personal applications based on the previous step. In light of the future coming of these great blessing through the Messiah, we should believe in Him and live in light of his coming. For many judgment was coming, as Amos emphasized, but there was also to be a believing remnant. For we church age saints, reading through Romans chapters nine through 11 and Second Peter chapter three can help us be hopeful in the way that we should be and to have a biblical attitude toward Israel and the Jewish people.