The graphic and page below, from the commentary on John, show what is required for a believer to be fruitful in the Lord. It required the Vinedresser (the work of God the Father), the True Vine (the work of the Lord Jesus), and genuine personal faith in Christ which results in faithful service. Negatively speaking this means that one must not love the world like Judas did. 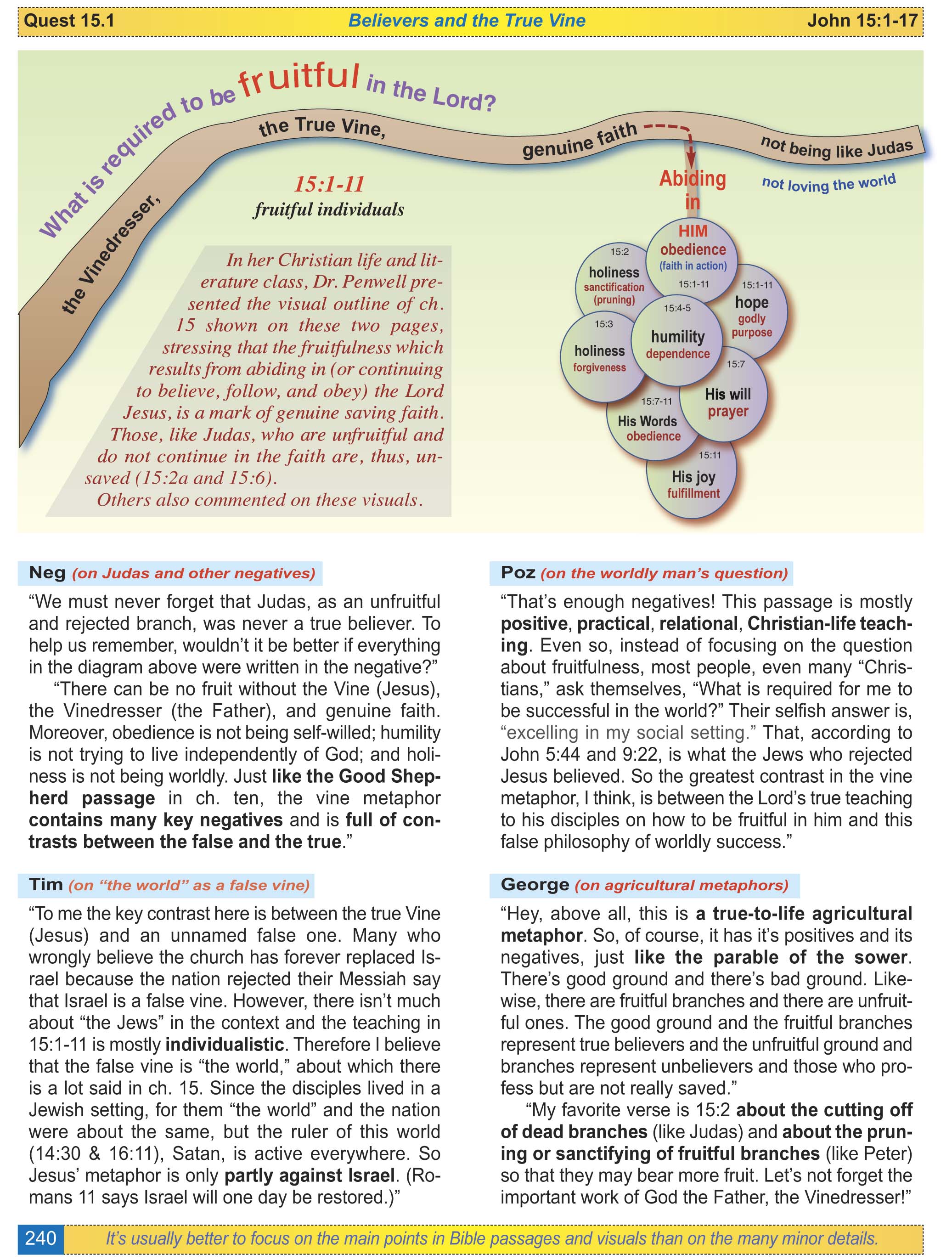 Perhaps the most important comment above is the one about people often ask the wrong question. Rather than asking how they can be fruitful for God, they ask, "What is required for me to be successful in the world?" Judas thought this way, and many others did as well. For instance, many of the Jewish leaders knew that Jesus was the True Messiah but remained silent because they loved to be praised by others more than they cared about pleasing God.

John 12:42 Nevertheless among the chief rulers also many believed on him [Jesus]; but because of the Pharisees they did not confess him, lest they be put out of the synagogue: 12:43 For they loved the praise of men more than the praise of God.

So What?
Be willing to suffer as a Christian rather than placing the emphasis on fitting in well socially or professionally.

For more comments on the True Vine chapter click on the link below. The second page of comments in the Vine chapter are mostly about fruitful fellowship and loving one another.

Let's do a quick study on the story of Jesus and Peter walking on water. (Only Matthew includes the part about Peter.) Here is a worksheet for Mat. 14:22-23. After reading the passage, go through the worksheet looking for what you consider the most important lines. (All, or nearly all, are correct.) 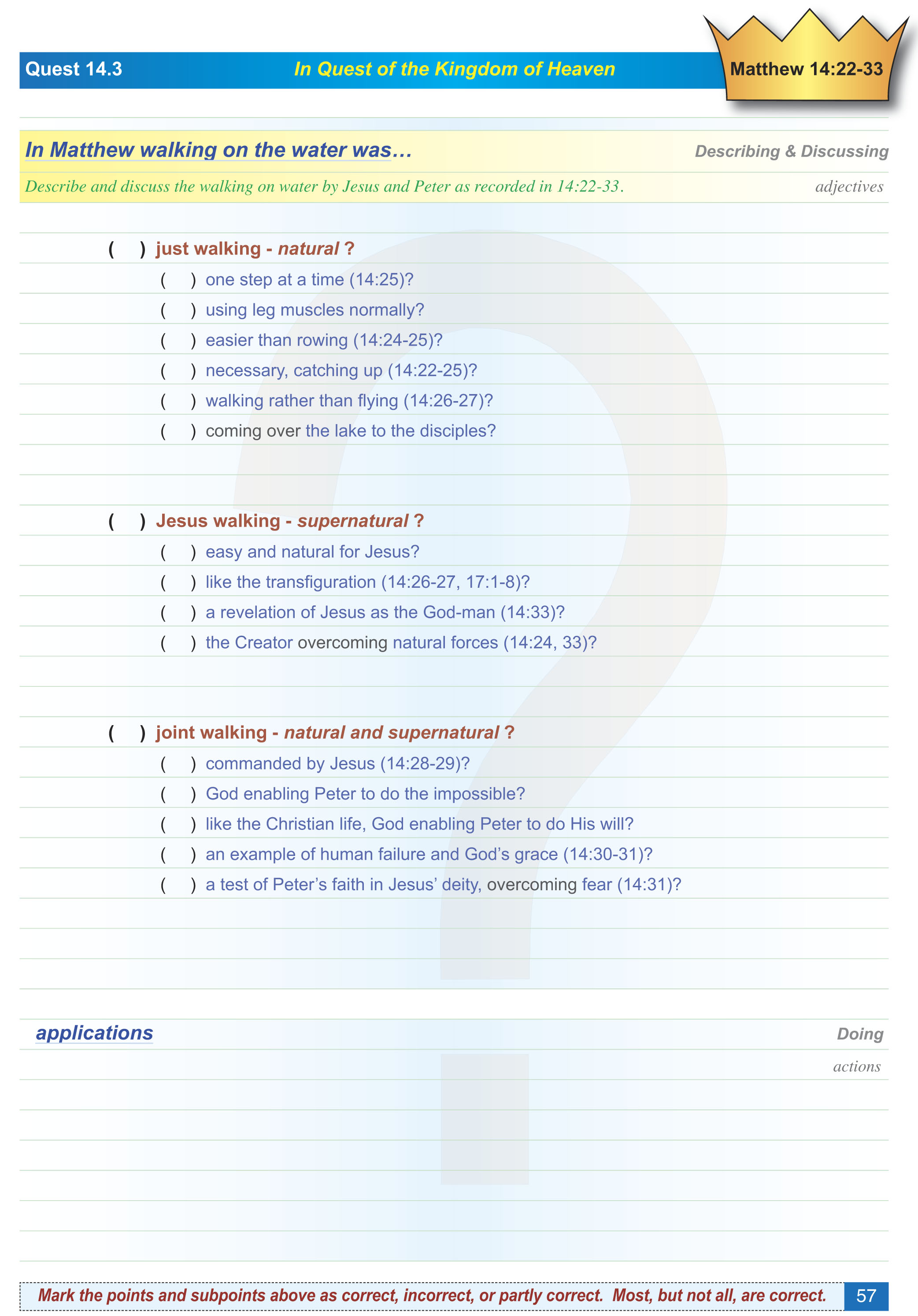 The third group of lines which cover Peter walking toward Jesus and being rescued by him are probably the one which most of us relate to best. In a way, Peter's walking on water pictures the Christian life by showing God enabling Peter to do God's will. Yet in a way it does not because believers obviously do not normally walk on water today. Nevertheless, God still must enable us to do his will whatever that may be for without him we can do nothing. Conversely, IF it is his will, we can do anything.

John 15:7 If you abide in me, and my words abide in you, you shall ask what you will, and it shall be done unto you. ---- Philippians 4:13 I can do all things through Christ who strengthens me.

So what?
Well, one clear application of this is for us to do as William Carey said, "Expect great things from God and attempt great things for God." It was NOT a mistake or a prideful act for Peter to step out of the boat. Jesus commanded him to do so. What has the Lord commanded us to do (Mat. 28:19-20)?

Ordinary Christians love Romans 8:28, but theologians prefer to talk and write about Romans 8:29-30. (Erickson's theology cites 8:28 six times and 8:29 more than twice as often.) This is because theologians love to debate the relationship between foreknowledge and election. Is this healthy?

Sadly, as often happens in the Japanese Bible, the key term showing logical connection, for or because, is omitted, the assumption being that the connection between verses 28 and 29 is clear enough without the term. Maybe so, BUT the original text that Paul wrote contained it.

So what?
Does this mean that Romans 8:29 is unimportant? No, but it shows that it is unhealthy and unnatural for Christians, including those who are theologians, to spend twice as much time thinking about verse 29 than about verse 28. The main point in the passage is NOT about foreknowledge or election. It is about God working all things together for good in the Christian's life. This main point in 8:28 is NOT controversial, and it should NOT be overshadowed by controversy about the supporting lines in 8:29.

So ordinary Christian friend, thank God for Romans 8:28, and don't let theologians, on either side of the debate about foreknowledge and election, rob you of your joy in the Lord!

This new poster which was made with the Snappa program today was used during our online Bible study this evening. We discussed the various verbs involved in God communicating to people. What verbs can you think of? Some simple ones like spoke and said are obvious. What else?

Here are some of the verbs that we talked about. God inspired (the Scriptures), reveals (himself in creation), warns (the wicked), commands (his people), and sent (the true prophets and the Son). In line with this last point, we talked about Hebrews 1:1-3. We also talked about the fact that God reveals himself by answering prayer. 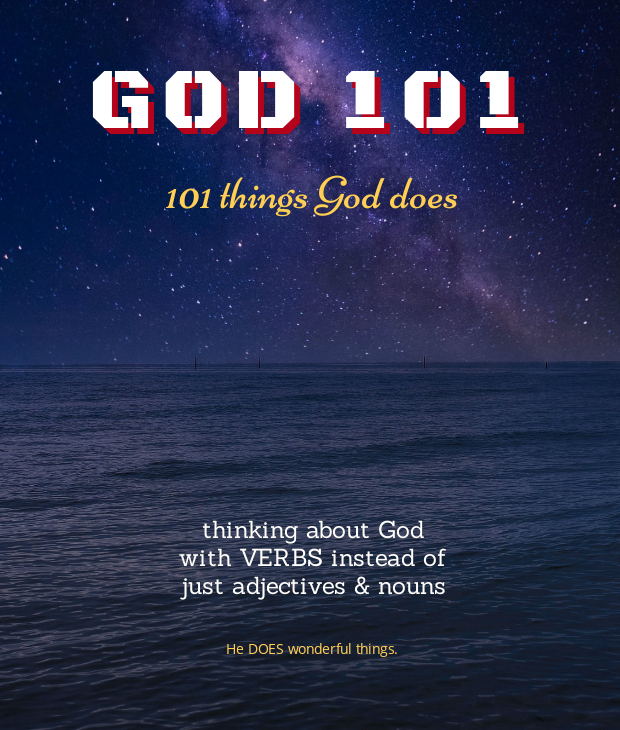 The Visions in the Bible are Linked.

The various visions in the Bible are all somewhat different. Yet there are common elements. For instance, the number four seems to be significant. Ezekiel's first vision involved four living creatures which probably represented the four corners of the earth and help show that the whole earth is the Lord's.

Ezekiel 1:4 And I looked, and, behold, a whirlwind came out of the north, a great cloud, and a fire infolding itself, and a brightness was about it, and out of the midst thereof as the color of amber, out of the midst of the fire. 1:5 Also out of the midst thereof came the likeness of four living creatures. And this was their appearance; they had the likeness of a man. 1:6 And every one had four faces, and every one had four wings. 1:7 And their feet were straight feet; and the sole of their feet was like the sole of a calf’s foot: and they sparkled like the colour of burnished brass.

Likewise, in Revelation chapter four, as John began to present his great and lengthy vision of future things, again these four living creatures (special angels as in Ezekiel) appear and are linked to God's interest in all the earth (Rev. 5:6).

‍Revelation 5:6 And I beheld, and, lo, in the midst of the throne and of the four living creatures, and in the midst of the elders, stood a Lamb as it had been slain, having seven horns and seven eyes, which are the seven Spirits of God sent forth into all the earth.

Similarly in Peter's vision in Acts chapter 10, the great sheet containing all kinds of creatures was lowered down to the earth by its four corners. Again, this may represent the four corners of the earth, but in this case the use of four was part of God's message to Peter and other early Jewish believers that God's plan for the church is worldwide and includes believing Gentiles on an equal basis with believing Jews.

Acts 10:10 And he [Peter] became very hungry, and would have eaten: but while they made ready, he fell into a trance, 10:11 And saw heaven opened, and a certain vessel descending unto him, as it had been a great sheet bound at the four corners, and let down to the earth: 10:12 Wherein were all manner of fourfooted beasts of the earth, and wild beasts, and creeping things, and fowls of the air.

Thus Ezekiel's first vision, Peter vision in Acts chapter 10, and John vision in Revelation are related to one another in the use of the number four to represent the whole earth which the Lamb (Jesus) paid dearly for with His blood (Rev. 5:12). "Worthy is the Lamb who was slain." Let us worship Him! 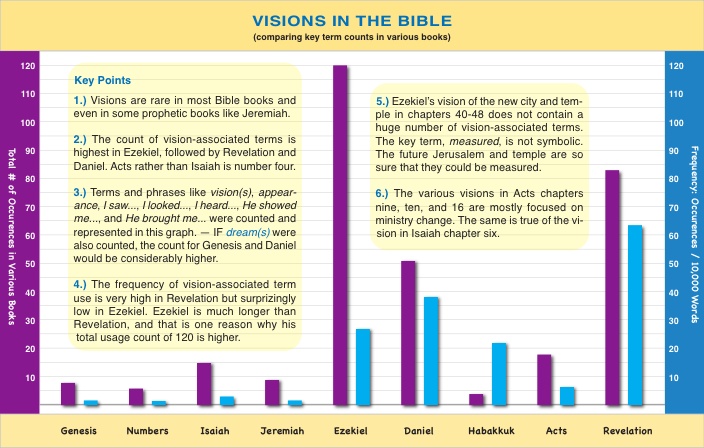 In addition, in Daniel 7:2, 8:8, and 11:4, which are also in visionary and prophetic passages, the four winds of heaven refers to spreading out in four directions.